From Yamato Launch to Be Forever

Production is advancing smoothly, and Be Forever Yamato is the biggest topic of the summer. It is already six years since love, the romance of space travel, and the personalities of the individual characters grabbed the hearts of the fans.

The secret of its enduring popularity? The launch of the new Yamato? The story, characters, and music? This is an exclusive interview with the creator of Yamato, Yoshinobu Nishizaki! 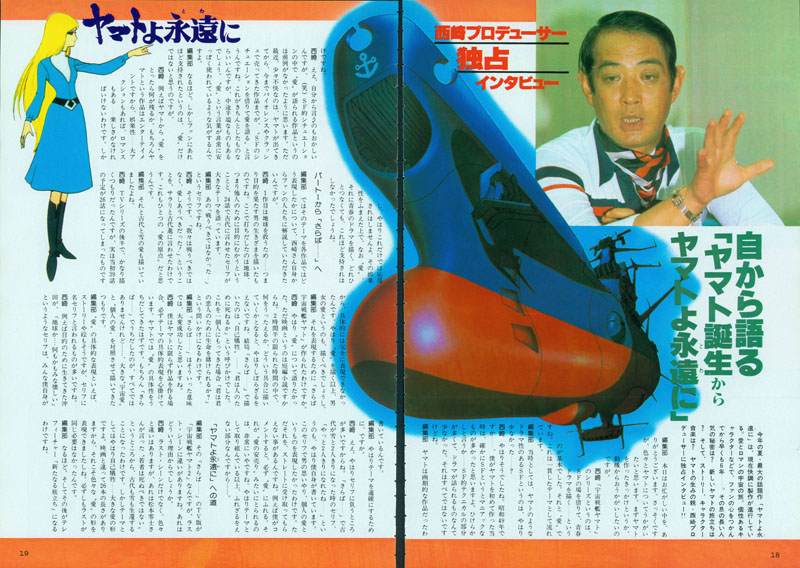 Interviewer: Thank you for taking time out of your busy day. I have various questions about Yamato. First I’d like to ask what motivated you to take the opportunity to make Yamato in the beginning.

Nishizaki: The Space Battleship Yamato series was a chance to use science fiction to depict the drama of youth; that was the basis for it. It is this and “love” that flow as a consistent theme.

Interviewer: There weren’t many SF stories then with the dramatic nature of Yamato, were there?

Nishizaki: That’s right. When I first made Yamato in 1974, there were too many SF works that put the technical aspects above the story, as if showing off. Most, but not all of them, had no real drama.

Interviewer: Yamato was a groundbreaking work.

Nishizaki: Yes, it sounds strange when I say it. (Laughs) I don’t think there was a precedent for an SF work to talk about “love.” However, after Yamato came out it’s been a little unpleasant recently. Even works sold on the basis of violence and fighting claim to “use SF to talk about love.” This could be a good thing, but it seems to only go halfway, so it feels like the word “love” is being cheapened.

Interviewer: Indeed. But I don’t think it was just the “love” part that has gotten so much support from fans.

Nishizaki: But what would remain if “love” was taken out of Yamato? Of course, since it is a work of entertainment, there must be big action and romance; it wouldn’t be good if it wasn’t fun. But this alone isn’t enough to hold it together. Over and above the characteristics of entertainment, it depicts the drama of youth with “love.” It would not be supported as much without that.

From Part 1 to Farewell

Interviewer: I would like the fans to hear directly from Mr. Nishizaki about how you expressed the theme in each work.

Nishizaki: The first work is about saving the Earth–it shows how a man in the prime of his life can achieve a purpose. There the primary purpose was to act for Earth and other people. The line Kodai says in Episode 24 speaks quite well on the larger theme.

Interviewer: It was that line, “we should not have fought them.”

Nishizaki: Yes. Kodai says, “we should not have fought them, we should have shown love.” I think that is the “starting point of love.”

Interviewer: It also showed the love of Kodai and Yuki.

Nishizaki: I intended to develop it considerably in the second half of the TV series, but because the plan for 39 episodes was dropped to 26 at the beginning, it could not be fully represented. Because “love” was presented, it was still necessary to develop the love between a man and a woman.

Interviewer: Was Farewell to Yamato made to express that?

Nishizaki: I still wanted to talk about “love,” but a movie is basically a short story. With the limited time of two and a half hours, I couldn’t help but try and squeeze everything in. In the end, Farewell became a story about “self-sacrifice” that asked, “Could you die for another person?” In the case of individuals, the question was, “Would you risk your life for someone you love?”

Interviewer: I think Farewell was very successful in that meaning.

Nishizaki: When I make a work even outside of Yamato, we always intend to find a concrete expression of the theme. The concept of “love” is surely concrete in Yamato. Of course, when Farewell to Yamato was proposed, my intention was to contrast the “love of an individual” with a “love for all of space.”

Interviewer: Speaking of concrete representations, in addition to “love,” there is the story and images, and also a lot of great lines.

Nishizaki: The line said by Okita when sacrificing himself for the mission, “Earth, I will miss everything,” was actually written by myself.

Interviewer: In order to ensure the theme was maintained?

Nishizaki: Yes, since it relies on those lines a great deal. In Farewell, Kodai’s line, “finally, you and me alone” [at the end] was also by me, wishing to express a man’s care and personal love. But sometimes it may not be clearly received. For example, whenever I touch on “love” in my comments. Some would take it as “love for sale,” and I really hate that because it is an essential element while you are dealing with it as a theme. 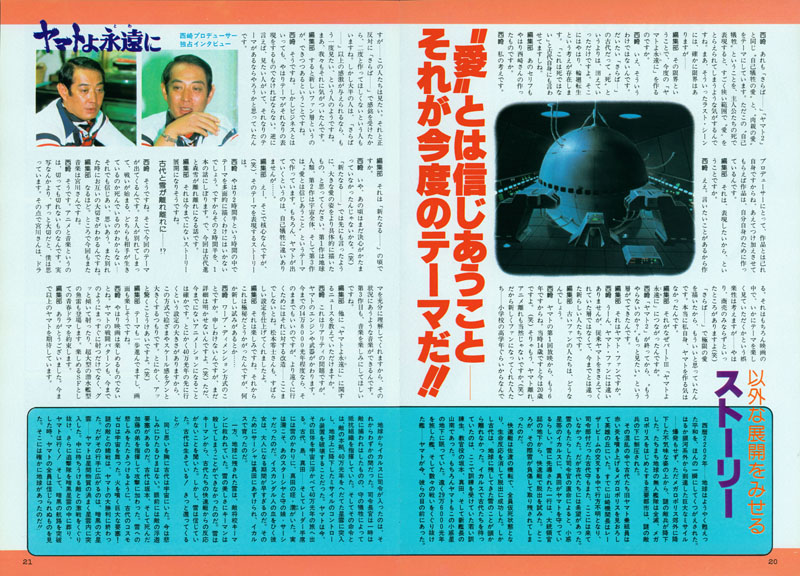 The Road to Be Forever Yamato

Interviewer: The last scene of Farewell to Yamato was different than the TV version, Yamato 2. What was the reason for that?

Nishizaki: In addition to the last scene, there was a variety of differences. Leiji Matsumoto’s belief that “young people should not die” was the reason Kodai and Yuki returned alive. However, concerning the theme of self-sacrifice, it is a form of great love. Unlike the movie, the length was 26 episodes, so we were able to express various forms of “love.” So it was not necessary for the ending to be the same.

Interviewer: Indeed. And after that came the telefeature, The New Voyage.

Nishizaki: It shares the “love of self-sacrifice” theme of Farewell and Yamato 2, and also has the theme of “love of family.” But if self-sacrifice is expressed as the death of the hero, I think it makes the perception of love too narrow. On the other hand, there are always limitations to expression.

Interviewer: Are you making Be Forever Yamato because of that limit?

Nishizaki: No, it’s not because of that. I want to remind you that in Farewell, Kodai didn’t actually die, but just disappeared or vanished into infinity. There is also the idea of reincarnation. It is said by Kodai, “this is not death.”

Interviewer: Was that another one of your lines?

Nishizaki: It was my idea. A producer works for himself. If I may be daring, I make these works for myself.

Interviewer: Because you want to express something?

Nishizaki: Yes. I make them because I have something to say. I think about the entertainment characteristics so you can enjoy watching the theme unfold in the movie, but after all it is also a business. (Laughs) I thought I’d gone as far as I could to depict love in Farewell. To tell the truth, I really had no intention of making more Yamato sequels.

Interviewer: How did it lead to Part III? [Be Forever]

Nishizaki: The support layer that said “don’t make any more” was replaced by “I want to see more” after Yamato 2.

Interviewer: In layers of Yamato fans?

Nishizaki: The fans are different now than they were in the beginning; they seem to be new and less traditional.

Interviewer: Who are the older fans?

Nishizaki: It’s been six years since the broadcast of the first series. Someone now 20 years old was 14 at the time. Isn’t it natural for them to drift away from both anime and Yamato? (Laughs) Therefore, the people who have newly become fans are in the upper elementary grades–they’re the ones who want to see it. I get a deep impression from them, quite the opposite as with Farewell. There were people who didn’t want me to make Yamato again after that. However, most seem to want more after experiencing the emotions in Farewell. We noticed that, too.

Interviewer: Then it means a new layer of fans has been made.

Nishizaki: Yes. But even if I enter into business for them, there must still be a theme to express. In other words, if in addition to a theme worth expressing, there are also people who want to see it, I thought I might do it.

Interviewer: Was it around the time of The New Voyage?

Nishizaki: No, I hadn’t yet decided on it in those days. (Laughs) Remember, earlier I said that for The New Voyage I pictured the theme of great love more specifically. Think about it. The first work was about Earth and mankind, the second was the great love of space, and the third is made with the theme “love is a belief in one another.” Needless to say, another Yamato voyage means self-sacrifice, after all…

Interviewer: Well then, finally (laughs), could you tell the story while unveiling the theme?

Nishizaki: I’m not able to present a multi-faceted theme in the span of two and a half hours. Therefore, I have to narrow that time down to one story. This time it is a story about Yuki and Kodai being separated.

Interviewer: It seems to be an unprecedented development. 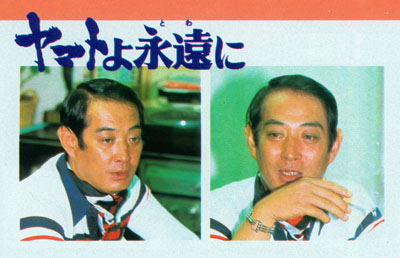 Nishizaki: Yes. Therefore, the theme comes out. The fight begins and two people are separated. Neither partner knows if the other is dead or alive. Still, they love each other and believe in each other. Moreover, when they are separated they understand each others’ importance.

Interviewer: I see. By the way, Mr. Miyagawa is making the music again this time.

Nishizaki: Yes. The anime and the music are inseparable. I think it’s much more important than in a live-action movie. Because Mr. Miyagawa makes the effort to understand the drama sufficiently, the music is made to suit the situation. I also want everyone to enjoy the music of the third work.

Interviewer: What other news can you tell us about Be Forever Yamato?

Nishizaki: This is a problem of reality, but Yamato‘s engine and weapons have changed. Being able to travel 148,000 light years is good, but to travel greater distances some modification is needed. Leiji Matsumoto completed some wonderful designs.

Interviewer: That will be great. After that, there’s something new being attempted that is strictly confidential.

Nishizaki: The Warp Dimension method? I’m sorry, but I cannot yet reveal the details. (Laughs) But it will surely be unprecedented in animation. Because the story covers up to 400,000 light years, we’ll use this method to enlarge the picture and give a greater impression of scale. Anyway, it will certainly be a big surprise… (Laughs)

Interviewer: Sounds like fun. The theme and the screen both seem to be going one step further.

Nishizaki: After all, the point of a movie is to have fun. The fighting pattern of Yamato has previously been in a straight line, but now it inclines and shoots and fires torpedoes like a submarine. I promise you an SF youth drama that will be fun.

Interviewer: Thank you. We look forward to Yamato more than ever!

Continue to our next Nishizaki article: 1980 interview from Monthly Animation Magazine on becoming an institution and answering critics