No matter what, even a movie of high quality is not guaranteed to become a “wonderful work” without the support of the fans. Producer Yoshinobu Nishizaki, the father of Yamato, held exchange meetings to hear the opinion of the fans and make it a better work. Here is a report about it… 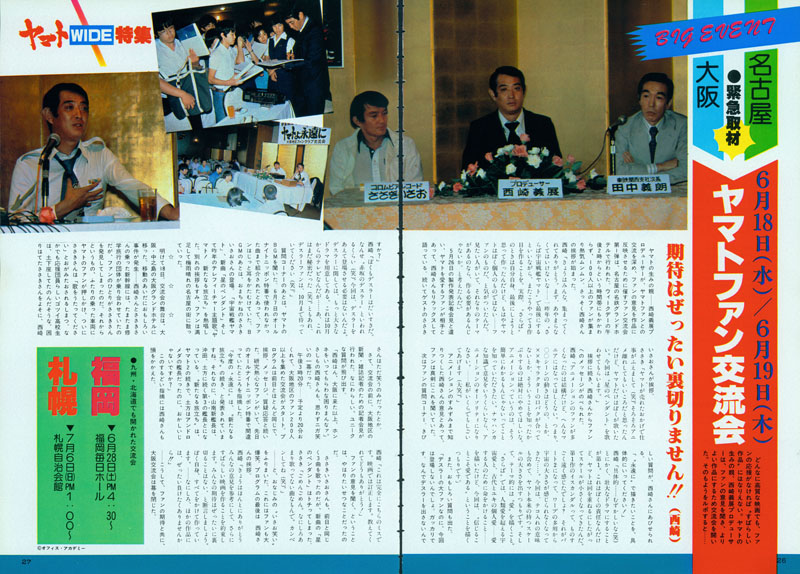 I will not betray your expectations! -Nishizaki

Producer Nishizaki, the father of Yamato, deepened the interchange with Yamato fans by holding meetings to absorb their opinions at the Meitetsu Grand Hotel in Nagoya. Despite the starting time of 2:00 pm on a weekday, more than 100 fans gathered in the stifling heat. Mr. Nishizaki gave his greeting immediately.

Nishizaki: Thank you for coming, everyone. First of all, I have to apologize since I declared that Farewell to Yamato was the finale two years ago, and I am making the third feature right now. Actually, at the time I intended to make Farewell for myself, but I realized that Yamato didn’t belong just to me any more, it belonged to the fans. There is a certain amount of people who want to see it, and a certain theme worth telling, so I thought it needed to be made.

Unlike the production announcement press conference on May 26, this was an audience of fans who love Yamato, so Mr. Nishizaki was more relaxed when he spoke. The next greeting came from special guest Isao Sasaki.

Sasaki: Yamato did well, so my work has increased. (Laughs) I guess it is time to retire as an anime singer, but I just want to sing Yamato. This time I will sing Pendant of Stars.

Following this greeting, Mr. Nishizaki gave his message to the fans.

Nishizaki: Though it is a good thing that animation fans have increased, I don’t want you to become maniacs. This means pointing out glitches in specific scenes or the voice not syncing up with the character’s mouth movement. Those technical aspects are what I hate the most, and I don’t want you to be preoccupied with them. I want you all to know that animation is not easy to understand. While you take the time to mull that over, I encourage you to become an animation authority. Then I will give you full training. (Big laughter)

This matched the opinion that Mr. Nishizaki is very savvy about every aspect of animation, and fans listened intently. Next came questions from the fans. The tough questions poured in on Mr. Nishizaki.

“Please say what you specifically want to present in Be Forever Yamato.”

Nishizaki: It’s hard to be specific. (Laughter) Anyway, the first goal was to make a magnificent drama. Even though it was a dream job, the scale of Yamato began to shrink over time. In the first work, didn’t it seem like Iscandar was very far away? Then in the second part, space didn’t feel very big because of the overuse of warping. So this time, to reinforce the feeling, we’ve increased the scale to that of the original Yamato.

We also present the “love” theme. In Farewell, it was about the “space love” that exceeded that of mankind, and the personal love of Kodai and Yuki–to risk your life for the one you love. This time the theme we present is, “to love someone is to believe in them.”

“I’m a big fan of Dessler, so it’s disappointing that he will not appear this time. Why did you leave him out?”

Nishizaki: I love Dessler, too. I am called “Dessler of Akasaka.” (Laughs) [Translator’s note: the Akasaka district of Tokyo is known for its many bars.] This time, it isn’t necessary for Dessler to make an appearance. We’re preparing a much bigger story for Dessler that will be on TV in October–oh, that was still a secret. (Laughter) Anyway, Dessler fans, please wait until October. (Laughter)

After the question period, Yamato music was heard. Everyone was introduced to a tune that was not heard on the All Night Nippon radio drama on June 7. The fans listened patiently.

After this came the long-awaited appearance of Isao Sasaki. He enthusiastically sang the Yamato theme, the new song Pendant of Stars, and the title song from last year’s telefeature, The New Voyage.

With the parting message, fans were fully satisfied and scattered into the city of Nagoya for a bright summer afternoon after the rainy season. 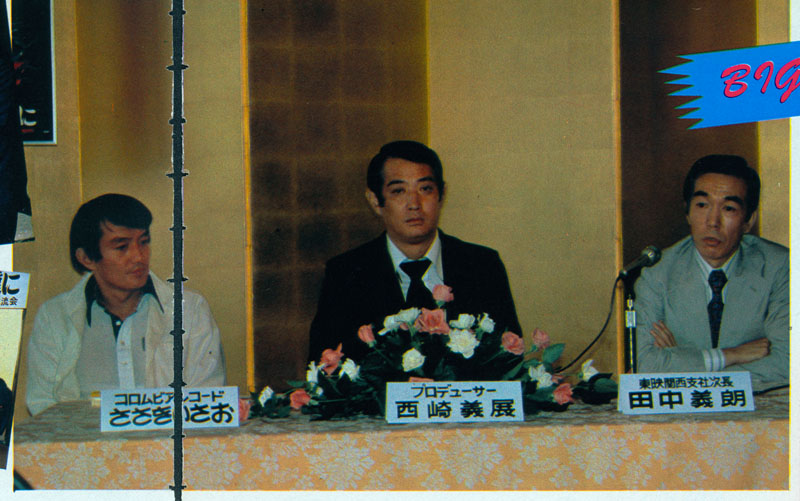 June 18 arrived. The stage of the interchange meeting moved to the Grand Hotel Osaka in Nakanoshima, Osaka. An interesting incident occurred during the trip. A school group got on the bullet train taken by Mr. Nishizaki and Mr. Sasaki. By chance, one of the fans discovered Mr. Sasaki. Immediately, Yamato fans rushed to the car where they were seated and begged Mr. Sasaki to sing the theme song. At one point, the high school cheerleaders dropped to their knees and pleaded with him. Mr. Sasaki was completely embarrassed, and Mr. Nishizaki was just laughing.

Prior to the interchange meeting, a press conference for print journalists was held in Osaka. Some unique questions seemed to pop up.

“Mr. Nishizaki, now that you are coming to Osaka, you have to speak frankly and honestly.”

Even the double-talking Nishizaki could not help laughing for a moment.

The interchange meeting was to begin at 3:00 pm, and though it was delayed by 20 minutes, over 200 fans had arrived from the Osaka area.

The program was nearly the same as the previous day; greetings and messages followed by questions and answers. An enthusiastic research fan pointed out a mistake in the All Night Nippon program the other day;

“It was announced that Be Forever continues from The New Voyage and Yamanami becomes the third captain of Yamato following Okita and Hijikata. But The New Voyage was a continuation of Yamato 2, where Hijikata was captain of the Andromeda, so isn’t that a little strange?”

Mr. Nishizaki had to accept this sharp-eyed critique.

Nishizaki: That was a complete mistake. I’ll correct it in the movie. Thank you for telling me.

It was an important case, after all, to hear the opinion of the fans. Isao Sasaki sang the three songs from the day before, but because Pendant of Stars was a new one, he bungled it a little.

Sasaki: Sorry, sorry. I haven’t sung that one very much yet. So don’t let me blow it this time.

The fans also burst out in great laughter, Mr. Sasaki showed his typically tender smile, and the program ended with another message from Mr. Nishizaki.

Nishizaki: This has been very helpful. Thanks to everyone’s opinions, I promise to make an even better movie. Rest assured that I will not betray your expectations. I’m putting everything I’ve got into this because I don’t ever want it to be second best to other works.

Thus, the Osaka interchange meeting ended with great expectations among the fans. 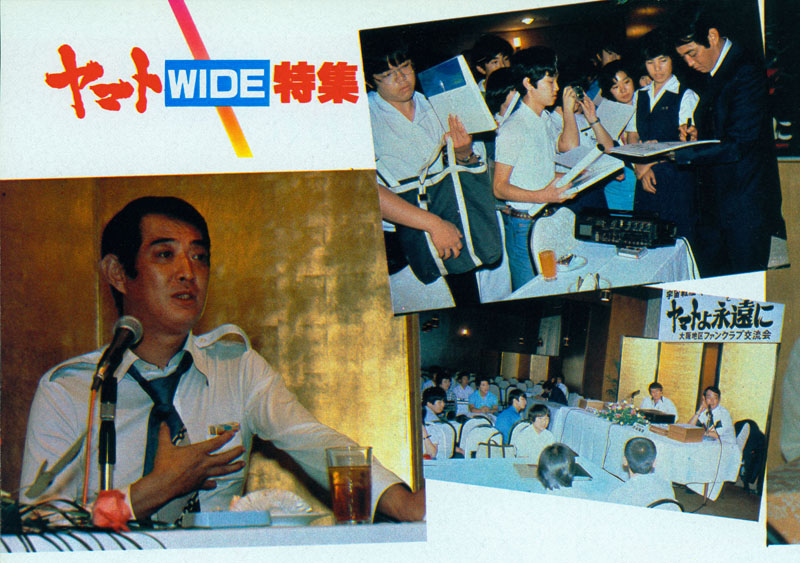