Yamato is a Japanese Beauty 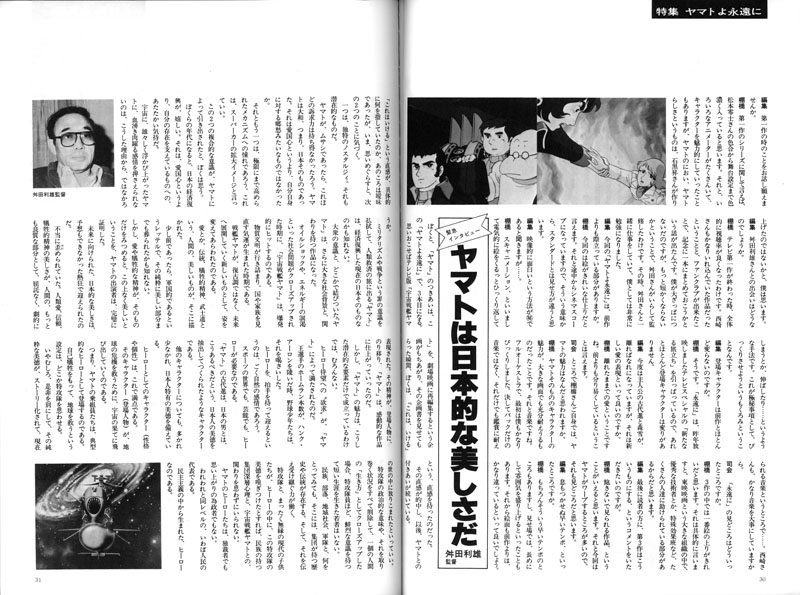 Be Forever Yamato is my third association with Yamato.

If you recall the TV version of Space Battleship Yamato, a plan came up to re-edit it for the cinema, and from the moment I saw the proposal, I said “this is a go” based purely on intuition. This intuition came true, and after that my association with Yamato continued.

When I think about what my “this is a go” intuition specifically meant, it was ambiguous in those days, but I notice two things now. First, a unique nostalgia. Also, a great potential.

If it were Musashi rather than Yamato, it would not have the power of appeal. Yamato is Yamato, namely Japan itself. Rather than patriotism, it is a nostalgia for oneself.

The other thing is admiration for a mechanism taken to its furthest extreme. This could be called an expansion of the Supercar image. [Editor’s note: the “Supercar” craze hit Japan in the early 70s, signified by toys and models of high-powered fantasy vehicles.] I think the combination of these two things was presented in Yamato.

In our generation, the economic reconstruction of Japan is joyful. It is a warm feeling, the comfort of one’s existence rather than simple patriotism. Thus, for those reasons, we Japanese cannot help but feel excitement and encouragement when we see Yamato rise bravely from the ground, I suppose.

The sense of guilt over war and militarism is dispelled by Yamato‘s voyage to save mankind; it may be like the economic recovery of Japan itself. Yamato is tied to the consciousness of a general public concerned with the work of a larger societal background.

At the time when social problems like the oil shock and the energy crisis came into focus, Space Battleship Yamato was an explosive hit. It was a time when material civilization came to a standstill, and an urge was born to renew country and family.

The Battleship Yamato, rather than reappearing in a reactionary way, was transformed and emerged as a figure of the future. Depicted in it were love, tradition, sacrifice and the Samurai spirit Bushi-do, all the beauty and virtue. If the label of militarism was applied even a little, the purely beautiful part might have been buried. But when love and the spirit of self-sacrifice rose to the forefront, the cast of Yamato proved the point beautifully.

This Japanese beauty, which had been distorted when projected into the future, was received with wild enthusiasm that went far beyond expectation. Trust, love of mankind, and the beauty of self-sacrifice were expressed in dramatic terms as the highest quality of human beings. The spirit was transplanted into the characters and made Yamato more emotional and touching.

However, the appeal of Yamato is not due only to factors of potential. It also fulfilled the longing for heroes. When Sadaharu Oh’s homerun total exceeded that of Hank Aaron, all baseball boys welcomed it with applause. It is quite a natural feeling to welcome a hero that way. A hero is necessary in the worlds of both sports and entertainment. 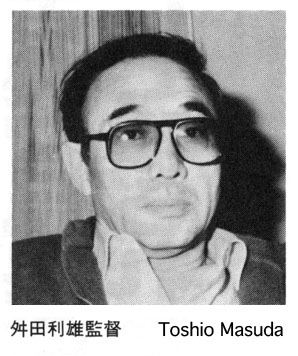 The notion of saving the Earth through self-sacrifice harks back to the special attack corps [Kamikazes]. Apart from the argument over whether that one-way death-dive was the right decision, I would assume that crystallization of virtue was transformed into the story and put out into the modern world.

Removing all the political meanings and surrounding circumstances, when Kamikaze pilots were closed up into their one-man lifestyle, they were youths who lived with the most determination for a short period of life.

Races, settlements, communities, and military forces are all based on histories and traditions of the people, and from there comes the power to urge them on. If children can now sense the virtue of the Kamikazes, I cannot help thinking about the relationship between the potential cultural subconscious and Space Battleship Yamato.

The heroes of Yamato are neither statesmen nor arrogant dictators. The level they occupy is, so to speak, the peoples’ representatives. They are heroes born out of democracy.