Special Announcement Just Before the Premiere

From Producer Yoshinobu Nishizaki to Everyone in the Yamato Fan Club… 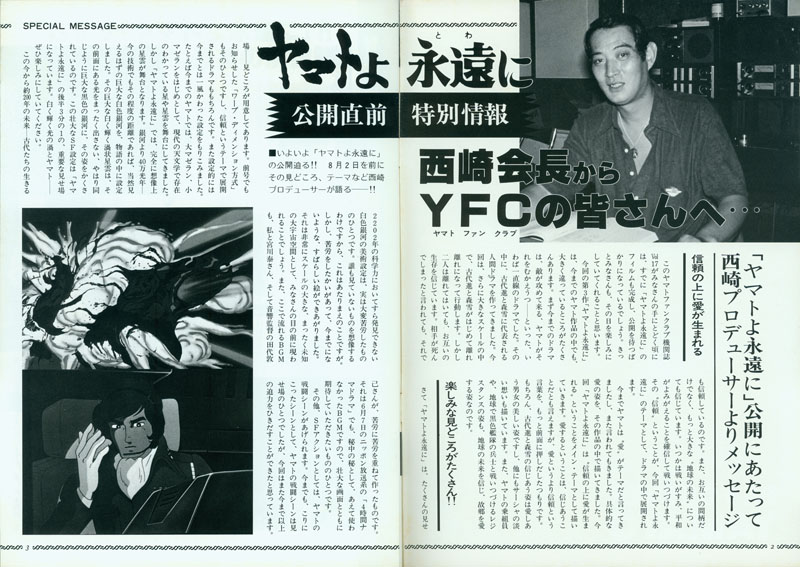 The premiere of Be Forever Yamato is almost here!! With August 2 near at hand, Producer Nishizaki talks about the theme and highlights!!

A Message from Producer Nishizaki on Be Forever Yamato

Love is borne of trust

When this 17th issue of the fan club newsletter reaches your hands, Be Forever Yamato should be completed and waiting for public exhibition. Surely, I think you are all looking forward to that day.

This third feature film will differ in many ways from previous works of Yamato. In the first story of the past, an enemy attacks and is countered by Yamato. It was a straightforward drama, so to speak. In it, we presented a human drama as represented by Kodai and Yuki.

This time, against a larger scale, Kodai and Yuki are separated in the first act. However, even if these two are separated, they believe in their mutual survival. That trust remains even if it is said that the other person died.

In addition to their relationship with each other, they also hold onto a larger belief in “the future of Earth.” They continue fighting, certain that the battle will end someday and peace will be revived. This “trust” is developed this time as the main theme of Be Forever Yamato.

I’ve said time and again that “love” is the theme of Yamato. A specific form of love will be presented in this work. In Be Forever Yamato, the main theme will be “Love is borne of trust.” Although it can be said that loving is believing in one another, this time the word trust is pushed to the front rather than love.

It is certainly the beautiful figure of man and woman loving each other that Kodai and Yuki both believe in. And there is another figure in Sasha, whose love is soft and tender. Moreover, the crew of Yamato, the figures of resistance that battle the soldiers of the black fleet, love their homeland and believe in the future of Earth.

A Lot of Enjoyable Highlights!

A great many highlights have been prepared for Be Forever Yamato. The “Warp Dimension system” mentioned in the previous issue is one of them, and the story developed around the theme of trust is of course another.

In addition, it also incorporates some unusual settings. For example, in the previous Yamato there were the Large and Small Magellanic Clouds; stars and nebulae known to present-day astronomy served as the stage. However, in Be Forever Yamato the stage is a completely imaginary galaxy. I set the huge white galaxy 400,000 light years from ours. Even modern technology can detect that. However, though this huge spiral galaxy gives off bright light, none of it is seen from Earth at all; it is in fact hidden behind a similar huge black galaxy.

This spectacular SF setting is an important highlight in the second half of Be Forever Yamato. Yamato and the shining whirlpool of light–please look forward to it.

This future of 200 years from now–the artistic setting of the white galaxy which cannot be discovered even by the advanced science of 2202 in which Kodai and the others live–was very difficult to produce. This is natural when making something that no one has seen before. However, it was worth the trouble to make such wonderful, unprecedented images. It will appear before you as a massive, entirely unknown phenomena of space.

In addition, composer Hiroshi Miyagawa, sound supervisor Atsushi Tashiro, and myself worked through one setback after another to make the BGM flow in this area. Since it is all top secret, we didn’t use this BGM in the magnificent 4-hour live radio drama that aired on the Nippon Broadcasting System June 7th…so it is one of the things I’d like to you anticipate on the big screen. 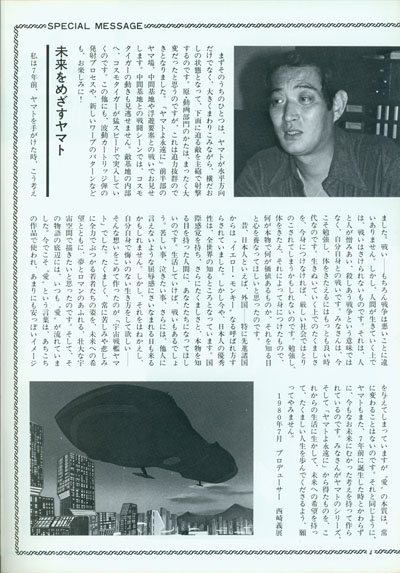 One of the scenes depicts Yamato firing the main cannons horizontally but downward at the enemy approaching from underneath, by rolling the vessel 90 degrees. It was a tough scene to realize for both key and sub animators, but it turned out quite powerful.

In the climax of the first half of Be Forever Yamato, we have a battle against the enemy’s intermediate base and floating fortress. The movements of the Cosmo Tigers in this battle are not to be missed. The Cosmo Tigers rush into the enemy base with great speed.

In addition, the discharge process of the wave-motion cartridges as well as the new style of warp are great fun!

Yamato That Aims at the Future

When I dealt with Yamato seven years ago, I thought about it in this way: of course, war is surely a bad thing. However, in the lives of human beings, war is unavoidable. It does not mean war between two hated enemies, but a struggle within oneself.

It is an ideal time now for everyone to study and strengthen the body. If we do not acquire the strength to survive now, we may be left behind in a more severe society. I would like you to get the ability to distinguish worth from worthlessness by study and physical training.

Speaking of the old days of Japan, we were often referred to abroad as the “yellow monkey,” particularly by developed countries. But now, the excellence of Japan is known around the world. I would like you to become a human being with strength, a cosmopolitan outlook, and an eye that knows the genuine article.

With life, there is always a struggle. There may come a day when you are tormented by such pain or humiliation that you cannot speak of it to another person. However, I want you to bounce back from it and live on with no regrets. Space Battleship Yamato was entirely made from such thoughts.

I wanted to depict strong young people who face pain and sorrow with hope for the future, overflowing with dreams and romance against the magnificent backdrop of outer space. And “love” was always flowing in the foundation of the story.

The word “love” is used in several works here and there these days, and although it can cheapen the image, the essence of “love” is unchanging. Yamato is still made today with the same thought as when it was born seven years ago, aiming for the future.

I continue to wish that the Yamato series and Be Forever Yamato help you to make the most of life and give you hope for the future. Please lead a strong, earnest life.