Jump back to previous page

One great thing about the resurgence of Yamato is the comeback of public events, which were a staple of the production years but dropped off considerably in the interim. While fans outside Japan aren’t able to participate in most of these, reports of their existence are always a welcome reminder that the Star Force is one big international family.

February 25
After playing for almost three months, the live-action Yamato movie closed in major cities after a very successful run. It was still shown in limited venues through the summer when it arrived on home video.

March 11
The great Tohoku earthquake shook Japan with devastating effects that will take many years to sort out. This had little to do with Space Battleship Yamato at the time (except to delay distribution of Fact File magazine to certain cities) but it would do so as the year went on. For example…

April 15
In response to the earthquake’s effect on the nuclear facility at Fukushima, Hiroshima International University announced a scientific program to cleanse radiation from water. The name of this program? “Project Iscandar.” (Newspaper coverage shown above right)

April 21
Star Blazers made a double comeback on this day when the first TV rerun in decades began on the Syfy network and ran through episode 14 (on June 9) when it made the transition over to Hulu. Also on this day, Forward Momentum Productions released the opening episode of Sea of Stars season 2, an audio drama that revisits the Star Force decades after their original adventures. Read all about the series and get access to the episodes here. 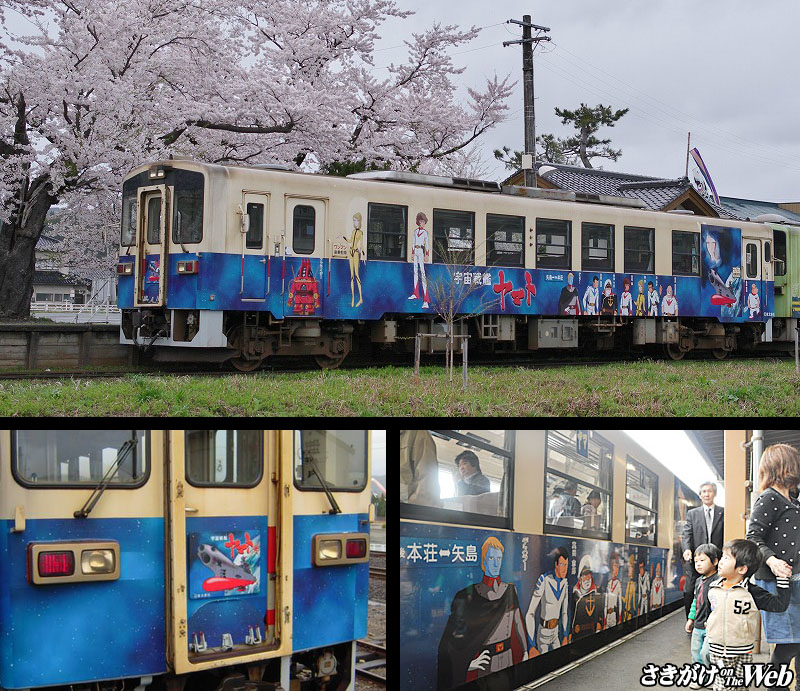 April 29
Japan’s Yurikougen [Yuri Heights] Railway Company put a customized train into service named the Yamato-Go. It was in operation through May 31, and attendants throughout the company dressed as Kodai and Dessler to heighten the adventure. Something like this happened just once before, when a single train line was named Yamato-Go on the premiere day of Be Forever in 1980 with Leiji Matsumoto as its conductor.

May 14 & 15: 22nd Modelers Club Exhibition
As an addendum event to the annual Shizuoka Hobby Show, this mini-convention allows some of Japan’s most dedicated modelmakers to bring their work out for public viewing. One highlight of the last two years has been a display from Space Waterliners, which specializes in Yamato kits and turns out some amazing works that put even the pros to shame. See a photo gallery of their 2010 exhibit here, and their 2011 exhibit here.

May 5
Yamato Party is a semi-annual mini-convention run by the most dedicated fans in Japan. (The 2009 YP is described in an eyewitness report here.) Their 2011 event was smaller in scope and renamed Yamato Party Fan Gathering. Their primary purpose was to raise funds for earthquake relief, and celebrate the Yamato spirit in the process. Read a detailed account of the Fan Gathering here.

July 2
“Leiji Future” is another mini-con, one which has become a yearly destination for Matsumoto fans in the month of December. It was quite a surprise, then for “Leiji Future 2011” to pop up in London for one day in the summer. See photos here.

July 4
Artist/designer Makoto Kobayashi (who played a major part in the making of Yamato Resurrection) made news at the closing ceremonies of Anime Expo 2011 in Los Angeles when he announced the production of a Series 1 remake for 2012. Later in the year, it would be announced again as Space Battleship Yamato 2199.

July 13-19
A Leiji Matsumoto Art Exhibition was held at Daimaru Department Store in Shinsaibashi, Tokyo. This is something else that happens once or twice a year, almost always in large department stores, with Matsumoto himself in attendance for a lecture and autograph session. See the announcement here.

August 6
You know cosplay has become an international phenomenon when it boasts its own Olympics. That’s exactly what the World Cosplay Summit accomplishes every year when participants from around the globe gather in Japan to compete, nation by nation. The 2011 Summit was held in Nagoya, and Prefectural Governor Hideaki Ohmura got in on the act when he turned up as everyone’s favorite Gamilon dictator.

September 15
Ever wonder where all those female Star Force members disappeared to after episode 10 of Series 1? It turns out they landed right here in the 21st century and have been turning up at public events. They’ve appeared at rollout events for pachinko games, at 2009’s Tokyo Anime Fair, in full force for 2010’s Yamato Expo ’10 and again at the 2011 Tokyo Game Show to spread the word about an internet provider named Big Globe. See more photos of these fetching space soldiers here.

September 18
This was something special, and fortunately for all of us it was captured on video. A Yamato parade float appeared at a 2011 autumn festival in Aizubange-machi with music from the live-action movie and a gaggle of crew members in uniform. But that was just the icing on a very impressive cake full of gimmicks. Click here to see proof that Japanese fans are cooler than we can ever hope to be.

September 19
For the first time ever, Yamato fans got their own eatery on planet Earth when the Italian “Cafe Crew” restaurant in Aoyama, Tokyo got a Yamato-themed makeover. It featured several archival artifacts (not the least of which was the 15-foot model built to promote Resurrection) and became a fan hotspot until the decor was discontinued about six months later.

October 2
Anime Weekend Atlanta happens every year in late September/early October, and always draws a contingent of Star Blazers/Yamato fans. For the second year in a row, they had a new movie to watch. This time it was the live-action film, fansubbed for this very purpose. Standing with the sign above is Tim Eldred, writer of these very words and host of the customary Yamato panel. Visit AWA’s home page here and start making plans for the next one.

By an interesting coincidence, the live-action movie made its TV debut in Japan at the same time, running on Sky PerfecTV from October 1 through 13. This included a single broadcast in HD on October 9, certainly a first in Yamato history.

October 8
With the continued need for earthquake relief, Yamato fans came to the rescue again with a special charity screening of Be Forever Yamato in Hiroshima. Just about anyone can see the film on demand these days, but not as originally intended, on actual film with the Warp Dimension expansion intact. That’s exactly what happened here.

October 20
The next adventure in Space Battleship Yamato pachinko games began on this day when the official website for Yamato Resurrection Fever went live. Sponsored by Sankyo, it came fully-loaded with content including free streaming of the original movies and plenty of game clips to assault the eyeballs. Read our report on the game here and visit the site here.

November
The promotional campaign for the Space Battleship Yamato 2199 TV series began on November 10 with press releases in Japanese media and a nice rollout two days later of an official website, flyers, and a one-minute trailer in theaters and on YouTube. Series director Yutaka Izubuchi and publicist Ryusuke Hikawa both appeared on Bandai/Namco’s Anime Beat web talkshow November 18 to dish out some details. Naturally, there’s a lot more to say about this, and it’s all in our first report right here.

November 14
While fans were still reeling from the news of 2199, they got another surprise when the long-awaited Yamato Resurrection Director’s Cut was finally announced for a limited theatrical showing in January 2012 (followed by home video releases in March). The concept had first been floated a few months after the movie premiered in December 2009 and made its way slowly through production despite the untimely death of Yoshinobu Nishizaki in November 2010. Unlike most Director’s Cuts, it is actually shorter than the original with an extensively reworked soundtrack.

December 4
Sankyo’s Yamato Resurrection Fever game arrived in pachinko parlors on this day; read all about it here.

December 6
Right on time, the trailer for the Yamato Resurrection Director’s Cut made its first appearance online, streaming first from the Yamato Crew website (Click here; it’s at the bottom left of the page) and then turned up a few days later on the Resurrection Fever site.

December 15
The Yamato Crew website got a facelift and teased a new forthcoming feature called “Comics Crew,” which promised comics and SF stories for download. Keep your eye on this here.

December 18
This was the date of the 6th annual “Leiji Future 2011” symposium at a venue named Culture Culture in Odaiba, Tokyo. It’s essentially an all-day celebration of Leiji Matsumoto where he interacts with fans and discusses his career with friends from the anime and manga field. This year’s highlight was the announcement of a new project titled Cosmo Super Dreadnought Mahoroba, an ambitious feature film planned for 2013. Read all about it here.

What better way to end another busy Yamato Year than by revisiting the original? That became possible in Japan when the Family Theater TV network began a 4-day rerun of the original Space Battleship Yamato series with episode marathons over four days, from December 26-29. It’s a safe bet the creators of the show could never have foreseen such a thing back in the uncertain days of 1974-75.

This began just one day after it was officially announced that Yamato 2199 would follow the same 26-episode length, with 4-episode blocks to be shown in movie theaters. Without a doubt, it was destined to become the major Yamato story of 2012.

Harsh reality dictates that every Yamato Year-in-Review must mark the passing of those who made a contribution to the saga that changed our lives forever. Here are those who joined the eternal ranks in 2011:

June 28
Voice actor Osamu Kobayashi died of pancreatic cancer at 76. He spoke for some of Yamato‘s most powerful characters: General Domel [Lysis] in Series 1, Emperor Zordar of the Comet Empire, EDF Captain Yamanami in Be Forever and Captain Mizutani in Final Yamato. Like many anime “seiyuu” of his day, he also dubbed live-action imports including the American TV series Rawhide.

July 23
Anime director/designer Toyoo Ashida died at age 67. He was literally there from the beginning, one of a small elite who first visualized Yamato in the 1974 pre-series pilot film and continued into the series itself. His work was also seen in Farewell and Series 3, but this was only the tip of a massive career iceberg.

Read our tribute to him here and see his credits on Anime News Network here.

December 1
Anime industry giant Shingo Araki died of acute circulatory failure at 72. He served as an animation director on Farewell to Yamato, but was far better known for his major contributions to Tomorrow’s Joe, Galaxy Express 999, Lupin III, Saint Seiya, Yu-Gi-Oh, and many, many more.

Finally, we lost an important member of our own fan community when Jerry Fellows passed away in late August. Jerry was one of the first to publish a dedicated fanzine to the saga called Space Fanzine Yamato, then proceeded to create its online successor, Space Webzine Yamato. It was in many ways the precursor to the site you’re reading now, which means we all continue to benefit from Jerry’s eternal enthusiasm. Read about Space Fanzine here and visit Space Webzine here.