Shall we analyze the role of each character playing an active part in the story!?

Shall we analyze the roles of the characters!? 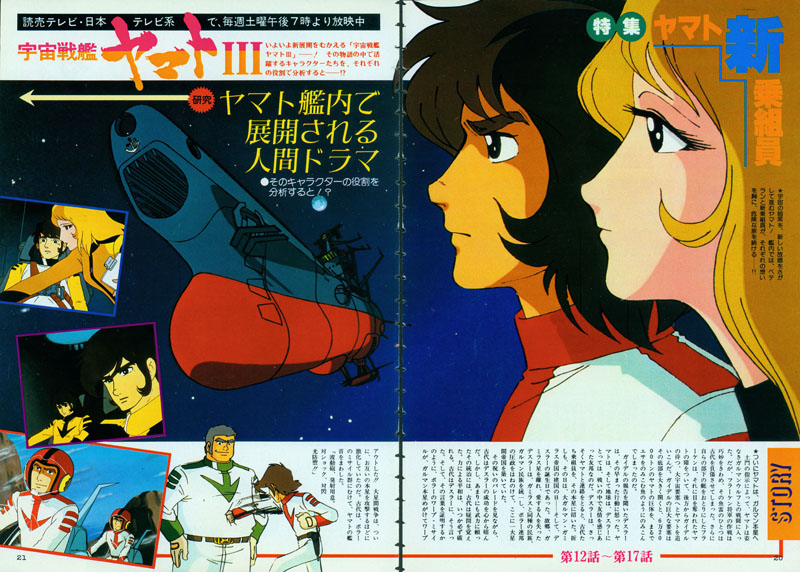 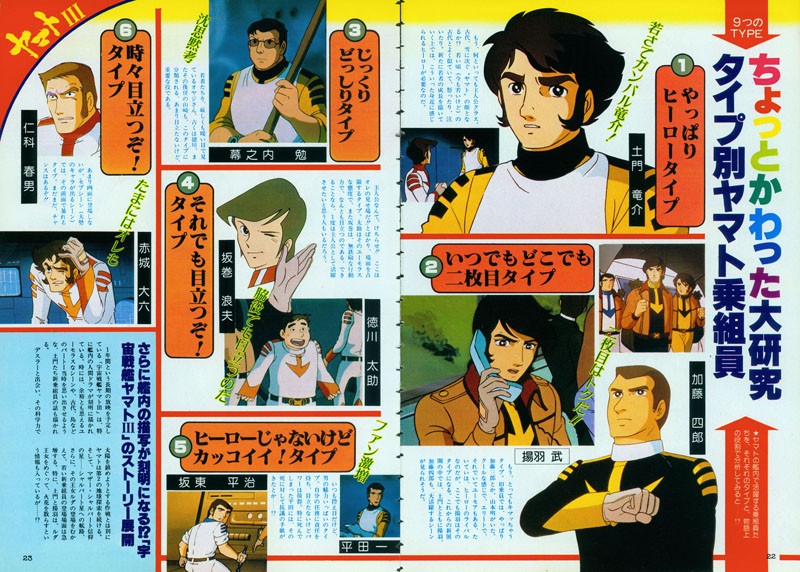 The Yamato crew according to comprehensive research

What are the types of each crew member that plays an active part on the warship Yamato when we analyze their role in the story foundation!?

When all else is said, it is the hero class. Who becomes the face of Yamato after Kodai and Yuki? He is very similar to Kodai (though still young) when he becomes angry or upset. When presenting the growth of a young man, such heroes are needed to identify with.

A very definite type. In the original crew, there were Saburo Kato and Akira Yamamoto. Has an elite feeling on the crew, often also humorous, but also the rival to the hero. Ageha is that type. From here, Ageha, Domon, and Kato are likely to take part in some big scenes.

3. The Slow and Deliberate Type

The fatherly type who watches younger men with strict yet warm eyes. Older men such as Tokugawa and his successor Yamazaki fit into this classification. Though they don’t attract much attention, they have an important position.

Though they seldom appear on screen, they do take part in mob scenes (where several characters appear). The type with rowdy behavior up front. Still, there is a chance for more!!

Though he is always modest, he is an appealing type of man. He takes responsibility for his duty and distinguishes himself, but does not attract attention. Did any letters of protest come in for Hirata in particular, who died!?

6. The Conspicuous Despite Everything! Type

Has a grudge against the main character!! That’s his highlight!! The type that just occupies a scene. Taisuke is funny and Sakimaki is reckless, but this type does not stand out at all. There might be those who want him to play the hero role if it becomes possible.

Block of text at lower left of page spread:

Clear foresight of the depiction of the warship!? Story development of Yamato III

Looking ahead at Yamato III, which is planned to broadcast for one year, human drama on the warship is presented in particular. Humorous scenes which remind us of the days of Part 1 with Kodai and Shima sometimes seem to be at the margins, and the story of Domon and the new crew is also presented.

They encounter Dessler, and Yamato continues to search for a second Earth separate from a strategy to calm the sun with the power of science. And en route to the Planet Shalbart – planet of the faithful to Mother Shalbart – Princess Ruda appears. Scenes of the new crew increase rapidly, especially centering around Domon and Ageha with Princess Ruda.

Is this information that includes some scattered sparks!?

[Translator’s note: At the time this article was written, the 50-episode storyline was still assumed to be a “go,” and it was to include a romantic triangle between Domon, Ageha, and Ruda.] 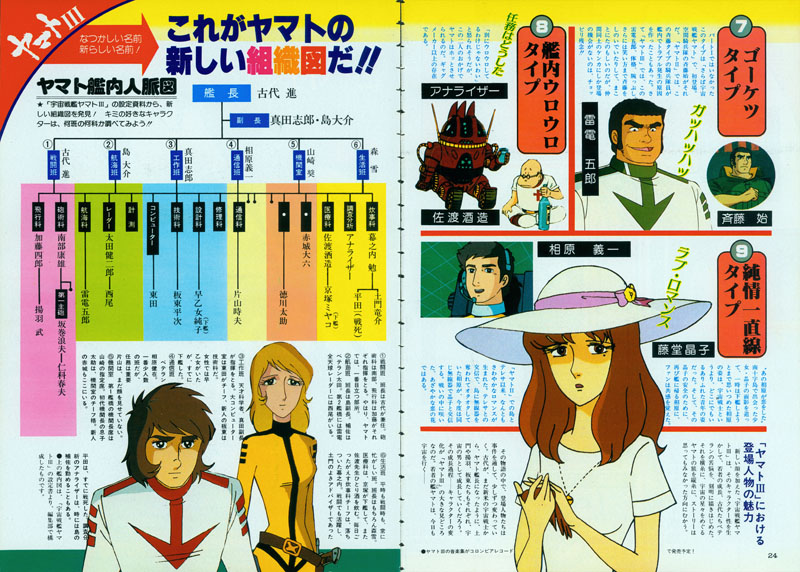 Page on right side of the above spread:

This type first appeared not in Part 1, but in Farewell. Hajime Saito of the Space Cavalry is one. In Yamato 2, the members of the cavalry division like Saito caused trouble on the ship. Now in Yamato III, it is Goro Raiden with his physique and strength. Furthermore, Saito was quick to laugh and actually reliable. It’s a bit regrettable that there is no chance of these two bumping into each other!!

“There’s nothing necessarily wrong with laying around.” Although they are likely to cause anger, life on Yamato is relieved by these two. They are more than just joke-makers.

9. The Naive and Straightforward Type

“That Aihara is in love.” Chasing the image of the girl Akiko, who he met on Southern Cross Island, Aihara became a brooding figure on board for a while. Rather than a space soldier, it was the common image of young men everywhere. Fans felt sympathy for Aihara, who returned to the ship again for Akiko’s safety. It was the first romance to be born since Shima and Teresa in Yamato 2. There, Aihara got flustered when his radio communication with Teresa was taken over. This time, he communicates with Akiko on the same radio. The bright flower of love blooms during the struggle.

The Charm of the Characters in Yamato III

Yamato III added new faces and makes the most of characterization, presenting the growth of young men, and their suffering along with the veteran Kodai. As Yamato warps across the stars, the story turns in unexpected directions. The characters change little by little. As Kodai grows from a space soldier to a young captain, Domon, Ageha, Bando and the others will mature into men of space as well. The change of character in the growth process is a big highlight of Yamato III. Yamato is a ship of young men going to space today.

Page on left side of the above spread:

This is the new organizational chart of Yamato!!

The personal connections within the Yamato warship

A new organizational chart was discovered in the setting materials of Yamato III! You can check what department your favorite character is in! 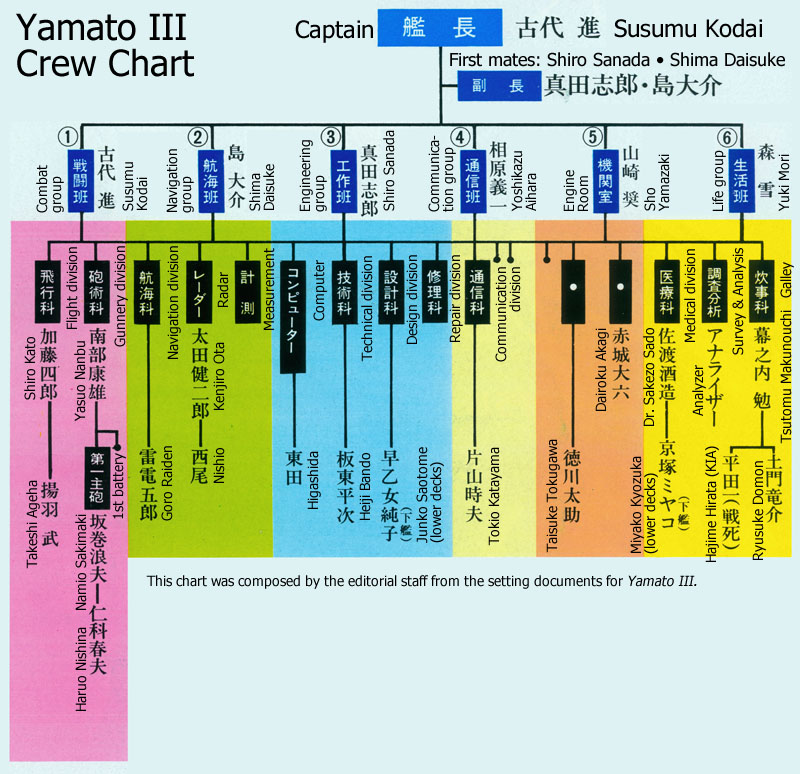 Captain Kodai holds the additional post of combat group leader. He commands Nanbu in the gunnery division and Kato of the flight division. This group is the most conspicuous on Yamato, after all.

Lead by First Mate Shima Daisuke, assisted by the veteran Ota. Raiden is stationed on the second bridge and Nishio supervises the stellar sphere radar. [Translator’s note: Nishio appeared on screen in brief cameos, but was never named on screen.]

Lead by First Mate and genius scientist Sanada. Bando is stationed in the computer core and Chief Higashida is a newcomer in the technical division. A female named Junko Saotome serves in this group below decks. [Translator’s note: Junko is a character who never appeared on screen.]

Veteran Aihara is in good health. It is a small but important team. Katayama has not showed up yet. [Translator’s note: and unfortunately for him, he never did.]

The chief engineer seat on the first bridge is reserved for Yamazaki. Taisuke, the son of the previous chief engineer, is chief of the engine room. Akagi is a new face here, too.

This group is always busy, in times of peace or in combat. Needless to say, the group leader is Mori Yuki. In the medical division, nurse Miyako Kyozuka carries out medical treatment when Dr. Sado is drunk. Makunouchi is chief of the cooking division. Hirata was a mentor to Domon and played an active part in battle, but was killed in action. Analyzer of the survey and analysis division sometimes assists Shima. 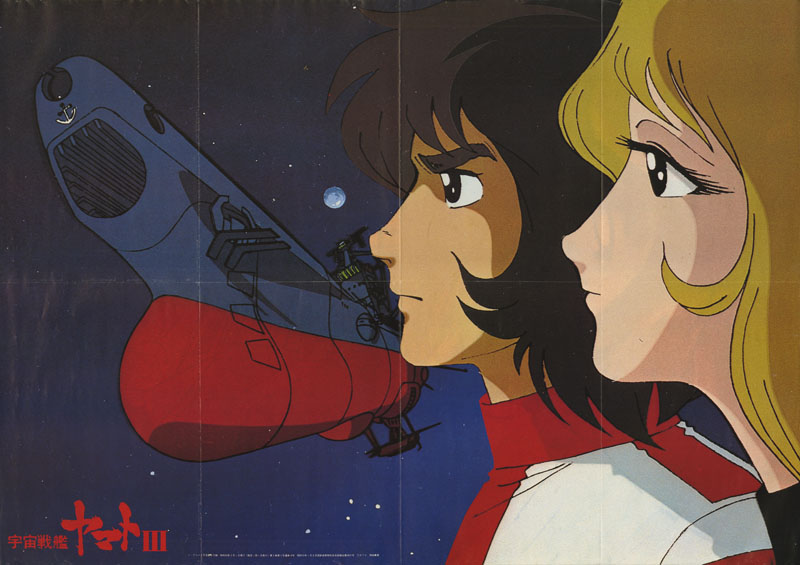 Bonus poster included with the magazine