It appears at last!? Now, attention to the special big themes of Yamato III 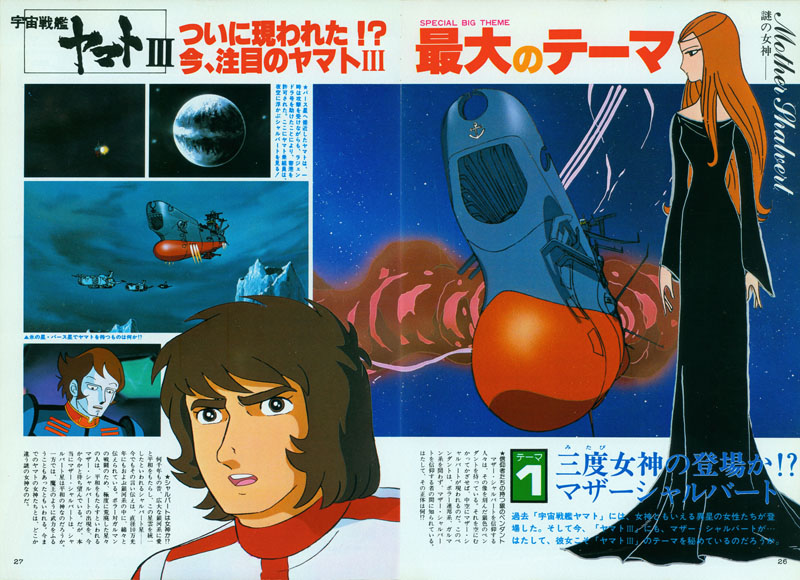 In the past, women of alien planets that could be called goddesses appeared in Space Battleship Yamato. And now, Mother Shalbart…sure enough, she holds the theme of Yamato III.

Silver pendants for the waiting believers

People who believe in Mother Shalbart have silver pendants carved with her image. If it is turned toward the sky, a mirage of Mother Shalbart appears. Regardless of whether they are from the Bolar Federation or the Galman Empire, this pendant is known without question by those who have faith in Mother Shalbart. But what is her true character!?

Blue caption: Yamato approached the Planet Berth and came under temporary attack, but was admitted because of the help given to Legendra. The Yamato crew sees Shalbart floating in the night sky here!

For thousands of years, Planet Shalbart is said to have unified the vast galaxy by bringing peace and love, and even now the legend is still told continuously in the galaxy 100,000 light years across. Planets that were devastated by the battles between the Bolar and the Galmans eagerly await the appearance of Mother Shalbart who will bring about peace. But some wonder if Mother Shalbart of Planet Shalbart really is a goddess of peace. On the other hand, it is said that a demonic military power might rise instead. This goddess of mystery differs a bit from the others Yamato has encountered. 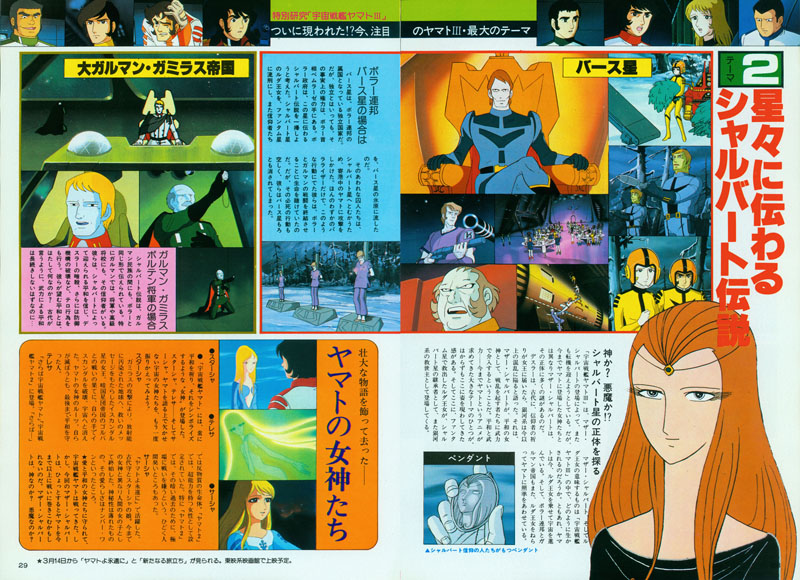 The Shalbart legend that spreads across the stars

God? Or Devil!? The true nature of Planet Shalbart

With the appearance of Mother Shalbart, Yamato III reaches another turning point. But Mother Shalbart is different from the goddesses who have appeared before, and her true nature has many mysteries. Dessler tells Kodai that if the prayers of her believers reach the queen, the galaxy would fall into even greater chaos. But if Mother Shalbart is a goddess of peace, it means she would intervene against those who cause wars with military power.

Peace and military power–there is a feeling that one of the major themes that have come from the Yamato anime has unexpectedly appeared here. And Princess Ruda, who was rescued from Planet Phantom, appears to be the successor of Mother Shalbart, the savior of the galaxy. How will this develop?

Anyway, Yamato voyages through space with Princess Ruda on board. And now the Bolar Federation and the Galman Empire are targeting them both. 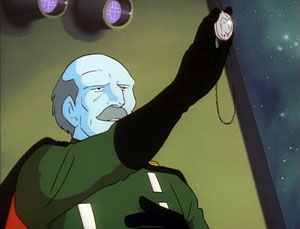 The case of the Bolar Federation Planet Berth

The Planet Berth is an independent nation that pays tribute to the Bolar Federation. But despite its independence, it is in the powerful hands of Prime Minister Bemlayze. The Bolar government intended to sweep away the Shalbart legend handed down to this planet. In addition to condemning Princess Ruda to exile on Planet Phantom, they exiled people of faith to the ice fields of Planet Berth. In order to reach Planet Shalbart, these poor people attacked Yamato at its port of call. They only conducted this action with stun guns, risking their lives to bring an end to the war between Bolar and Galman. But after this vain, desperate act, they were erased along with all of Planet Berth.

The case of Galman-Gamilas General Bolten

[Translator’s note: “Bolten” was changed to “Heigel” after this article was written.]

The Shalbart legend is also passed down through the Bolar and Galman races. In Galman in particular, there are high-ranking persons of faith among the officers and generals. They believe that Shalbart can bring about peace, so they attempt acts of terrorism such as the assassination of Dessler and the sabotage of defense mechanisms. What is the peace that they strongly desire? Kodai would say that peace through military power cannot last long…

The Goddesses of Yamato adorn a magnificent story

In Space Battleship Yamato, “goddesses” appear to symbolize prayers for peace. Starsha, Teresa–and Sasha. We’ll look back once again at the goddesses of space who are indispensable when talking about Yamato.

Earth was contaminated with radiation by the attack of Gamilas, and the Queen of Planet Iscandar send a message of help. In the climax of the battle against the Goruba of the Dark Nebula Empire, she destroyed Iscandar with her own hands and disappeared into space. She is the root of the goddesses of Yamato, the one who kept peace to the last until she herself perished.

Appeared in Farewell and Yamato 2. She was a living being of anti-matter in Farewell, and a woman of supernatural power in Yamato 2. In Yamato 2 in particular, she had an extreme distaste for war.

Played an active part in Be Forever Yamato, the daughter of Mamoru Kodai and Starsha. Unlike a goddess, she lived as a human girl. Although her mysterious nature faded, her loveliness was extraordinary.

Space Battleship Yamato has fought under the protection of goddesses of love and peace. However, Mother Shalbart may pull Yamato into greater battles than ever. Is Mother Shalbart a god? Or a devil? 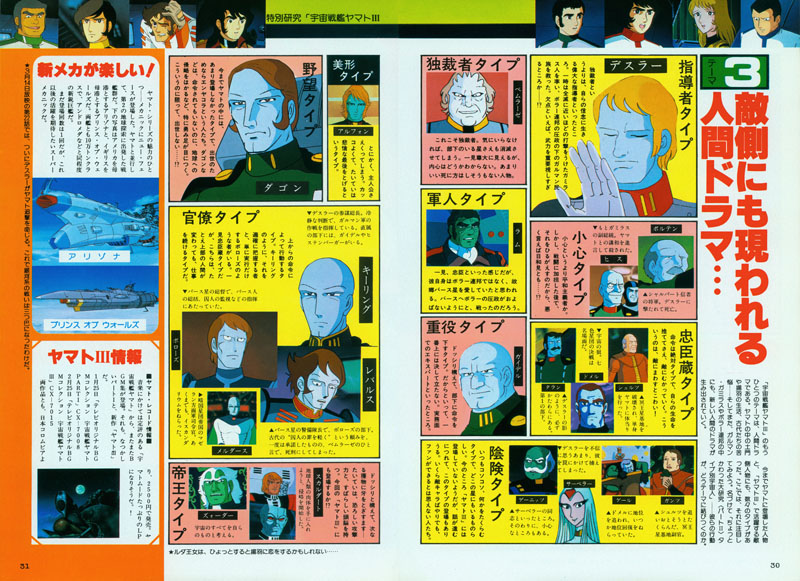 Personal drama also appears on the enemy side…

Another theme of Yamato III is the drama of people; the struggles of Kodai, Domon, and Ageha on Yamato–and new personal drama is also brought forth in the Bolar Federation and the Galman Empire. There are many types of people who appeared so far to play active parts on the enemy side of Yamato III. Let’s examine them here in Deep Research Part II: People of Space, and see how they are tied to the theme. 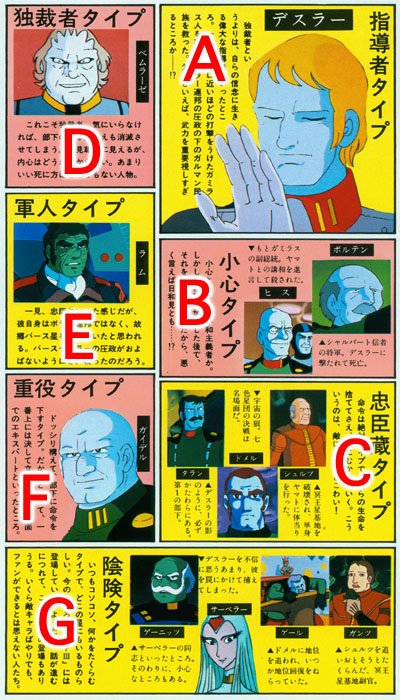 It is said that a great leader lives his own beliefs rather than being a dictator. He lead the Gamilas people from the brink of annihilation and saved the Galman race from the tyranny of the Bolar Federation. Is it a shortcoming that he puts too much emphasis on military power!?

A pacifist rather than a coward. However, this change came about after participating in a battle. Is opportunism a bad thing!?

Hisu: the vice-president of Gamilas, killed for advocating peace with Yamato.

Bolten: A general and Shalbart believer; shot and killed by Dessler.

Follows commands absolutely, will sacrifice his life in facing the enemy. Don’t turn this type into your enemy!

Shulz: his Pluto base was destroyed, and he threw himself at Yamato alone.

Domel: the wolf of space. The decisive battle at the Rainbow Star Cluster was his signature scene.

Talan: Like a shadow of Dessler, always by his side. His number 1 subordinate.

This is a dictator. Would wipe out even an allied planet if he didn’t like it. Looks arrogant at first glance, but there’s no telling what his real intentions are. The kind of person who is unlikely to have a good death.

A beefier type that gives commands to subordinates. Even so, they never stand at the top. Stays on the practical side, like an ex-pat.

Looks like a loyal subject at first glance, but is not himself a member of the Bolar Federation. It is thought that he loves his home planet Berth. Would probably have fought back against Bolar tyranny if it reached him.

Always plotting something on the sly, there seems to be one on every planet. Although one hasn’t yet appeared in Yamato III, this type may pop up, too. Among enemy characters, this type never seems to gather any fans.

Ganz: The Pluto base deputy who plotted to defy Shulz.

Geru: Lost his position to Domel, aimed at recovering it someday.

Sabera: Considered Dessler untrustworthy; caught him in a trap and arrested him.

A type that seldom appeared in Yamato before now. The kind who gives his all when it comes to getting promoted. Though he was not ordered to, Dagon planned aggression against Earth, and acted rashly in his own interests. Is this the only way to succeed in life!?

Could defeat even a hero character. The cool character type who generally meets with a sad end.

The type that acts on orders from the top. There are those like Keeling who grasps them accurately, and those like Boroze who simply carries them out. Seems to be a loyalist, but this type carries on working even if the leader at the top changes.

Keeling: Dessler’s chief of staff. Has directed Galman military operations with sober judgement. Gaidel and Histenbarger are his direct subordinates.

Boroze: Governor-General of Planet Berth who dealt with matters like directing citizens and guarding prisoners.

Rebarus: Captain of the guard on Planet Berth, a subordinate of Boroze. Although he at first consented with Kodai’s request to “treat the prisoners lightly,” he dealt them the death penalty at the command of Bemlayze.

Meldars: Military commander of the Magellanic Clouds for the Dark Nebula Empire. Aimed at obtaining Iscandarium to the last.

Beefy and with sharpened fangs poised to strike–usually has fearsome strength and a powerful mind. Will this type appear in Yamato III?

Skaldart: Started an invasion to obtain the bodies of Earth people.

Zordar: Regards all of space as his own.

Footnote: Princess Ruda might possibly be in love with Ageha…

Attractive new faces have appeared in the mecha of the Yamato series. In parallel with Yamato, a group of battleships launched on the search for a second Earth. The Arizona is presumably from a home port in America. The Prince of Wales is assumed to be from England. Both battleships are in the 100,000 ton class, comparable to the Andromeda. You’d expect some future activity from such super-mecha, but so far they’ve only appeared once.