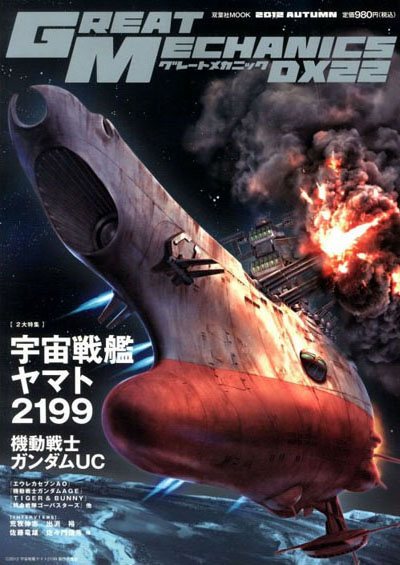 Published by Futaba Co. on September 14, 2012, this issue continued the magazine’s tradition of exceptional Yamato 2199 coverage. The impressive cover art promoted a 12-page article that concluded an ongoing interview with Yutaka Izubuchi and Masanori Nishii. Most of the 12-page article was filled with their scene-specific commentary on Chapter 2. The text here presents the interview that followed. Revisit earlier coverage from the magazine here.

The journey to Iscandar is continuing smoothly in Yamato 2199, and the premiere of Chapter 3 on October 13 is approaching. If Chapter 2 was about “motion,” being packed with action like the warp and the Wave-Motion Gun, then Chapter 3 will be about “stillness” so to speak. And it may be said that the essence of Yamato 2199 is finally unveiled. 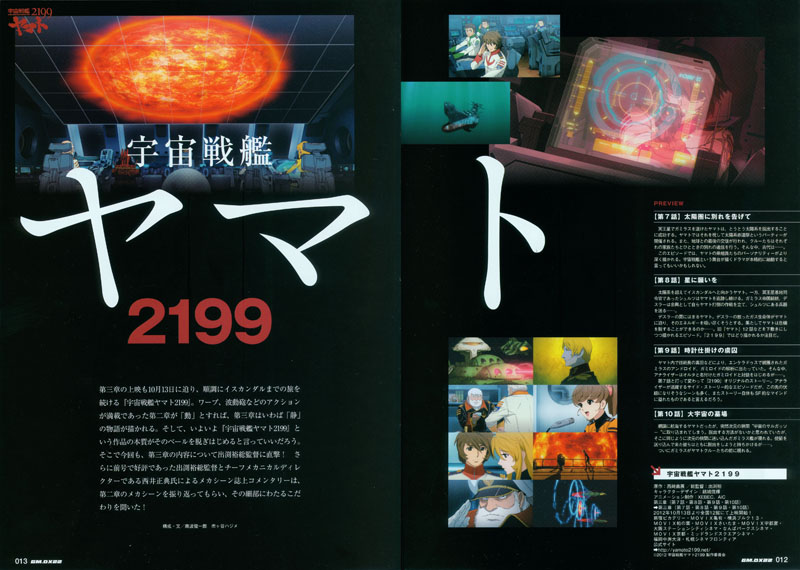 Overtime commentary on Chapter 2 and the highlights of Chapter 3

The second half of this interview is thorough, with a deeper look at Chapter 2 and talk of Chapter 3, which will soon be released.

More attention to this and that in Chapter 2!

Interviewer: There was a lot in Chapter 2 (Episodes 3-6), such as the warp and the Wave-Motion Gun. First I’d like you to look back at Chapter 2. When Yamato departs from Earth at the beginning, the Earth is at the upper part of the screen with Yamato flying under it in a sense of up and down. It was an interesting shot with an impression of size.

Izubuchi: It’s the same state as the space shuttle in orbit. When it goes around the Earth, the upper surface of its body faces toward the Earth, and I thought it would be the same for space battleships, including Yamato. When the characters are on the first bridge, I wanted them to look up at the Earth. And there are planets going around overhead. It has a good feeling, because it wasn’t seen in Yamato until now. In Episode 2 when we’re standing next to the underside of Yamato on Earth, it’s tilted a little. It’s a precursor to it beginning to roll over.

Nishii: It was tilted farther at first, but since the image was a bit severe, the incline was reduced.

Izubuchi: Both you and Junichiro Tamamori felt that when a ship turns, it should tilt outward. In previous anime, I think it was drawn to tilt inward when turning, like a bike. Therefore, this time in 2199, Yamato and the other naval vessels of the Earth fleet are depicted leaning outward while turning.

On the other hand, they are like living organisms on the Gamilas side. There is the image of a group of sharks attacking, so conversely they tilt inward when turning like a bike or a fighter. It’s a differentiation. 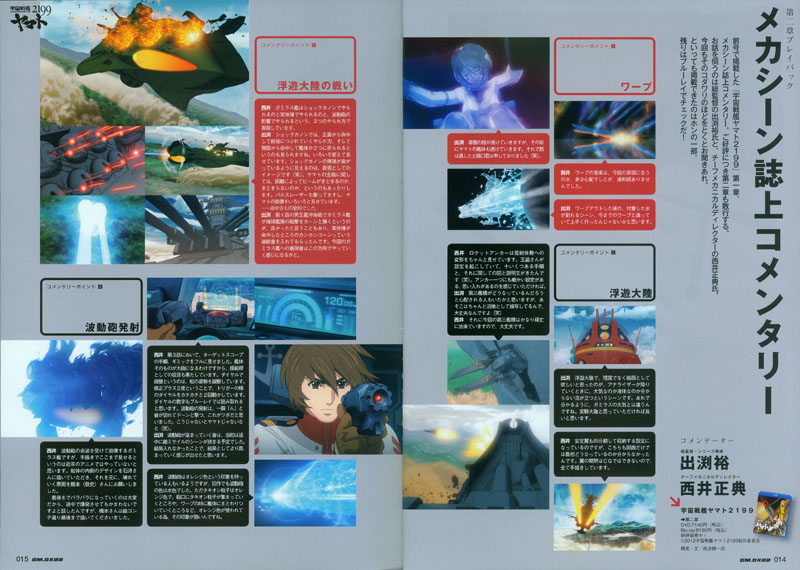 Interviewer: I’m interested in the intonation of the captain. Though it differs from the original, it seems to be like the old navy. I’d like to know if you were particular about that.

Izubuchi: That intonation was used by people during the war and in old war movies, and I think it has become mainstream through its use in recent works. It’s been circulated by people in the Maritime Self-Defense Force that Yamato got the intonation wrong, and I lamented it when I heard that story. When word gets around about the remake, I’d like it to be said that we got the intonation right. (Laughs)

Interviewer: Speaking of the captain, when you summarize the battle of Pluto, it can also be referred to as the Battle of Okita and Shulz.

Izubuchi: The judgment of each commander was questioned respectively, and I think the point was that these two people were probing each others’ intentions. Whether or not it is correct, judgments are made when you don’t understand the attitude of another person. Actual history is like that, and only when we look back at it from the outside can we say it was right or wrong. In this sense, I don’t think we can say if either Shulz or Okita made the wrong decisions at that point.

Kato’s report of the discovery of Pluto base is false, so it can be said that the wrong decisions are made at the time based on inaccurate information. However, they could cope with it because Okita’s decision lead to victory. Whether or not that victory was accidental, a “chance of victory” is something else that occurs in actual war. So I said at the script meeting that rather than saying Shulz lost by giving the game away, I wanted his operation to be considered a proper military maneuver. 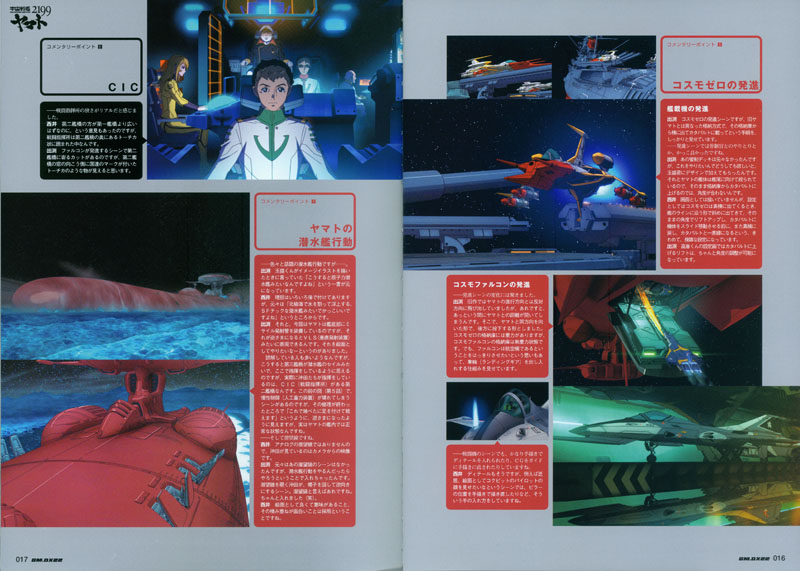 Interviewer: Shulz may have been at a disadvantage since the unknown element of the Wave-Motion Gun was applied.

Izubuchi: But when Nanbu says to fire the Wave-Motion Gun to clear it up, feelings aside it is the wrong tactic. Even if the gun knocked out the enemy, they are defenseless after using it, and there is a possibility of being attacked by the enemy troops who survived. So the tactics suggested by Nanbu were also his opinion, and as such, were a mistake. (Laughs) In fact, the Wave-Motion Gun is not an omnipotent, all-purpose weapon in terms of operations.

Interviewer: What kind of place was the floating continent, which the Wave-Motion Gun destroyed?

Izubuchi: The plants attached to the planet bombs for Gamilasforming the Earth could have been developed there, but I haven’t actually determined it. The words of Sanada are also just speculation. Although the Earth side has made judgments about the planet bomb attacks, they are not necessarily correct. The images of this area don’t provide too much information at face value. It’s a place where I want you to enjoy the implications.

Interviewer: The battle with the Gamilas fleet on the floating continent was quite dynamic.

Izubuchi: It couldn’t be done that way in the old days, including the expression of explosions. CG is what enabled it to be made now.

Interviewer: I couldn’t help smiling when Kodai used binoculars in the battle. I couldn’t decide if it was real or anachronistic. (Laughs) 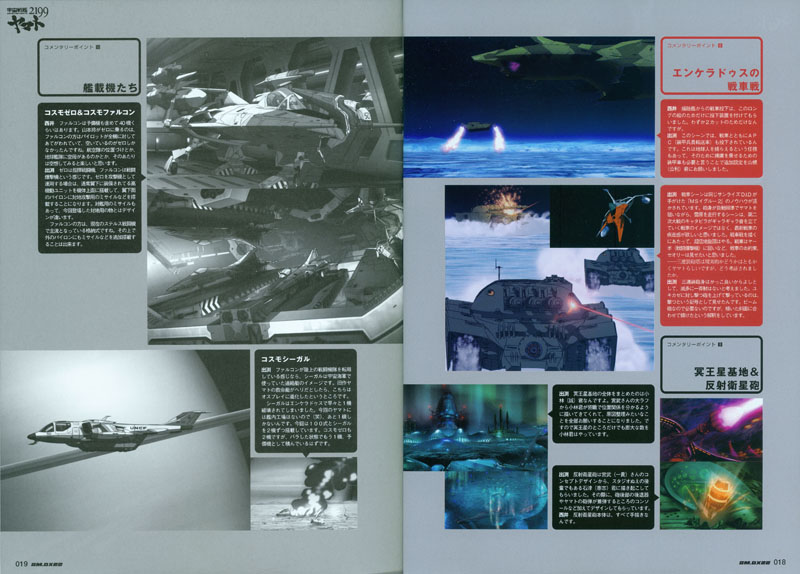 Izubuchi: Shinji Higuchi, who did the storyboard, said that binoculars are necessary on a ship. In fact, there is a theory for the reason that we use binoculars on the bridge. If video or radio communication are lost, binoculars would be used to see flashing signals like on Kirishima. It is an element we couldn’t leave out in a work that mimics life on the sea.

Nishii: Logic is important, of course, but if it is only driven by logic, it is no longer Yamato.

Chapter 2 was “Motion” and Chapter 3 is “Stillness”!

Interviewer: After the flashy battles of Chapter 2, how will Chapter 3 expand?

Izubuchi: It will go further in-depth with the characters.

Interviewer: There is also a war movie-like drama that unfolds when people of Earth meet a Gamilas person.

Nishii: I think that where Chapter 2 had a feeling of “motion,” Chapter 3 has a feeling of “stillness.” Each character is depicted more deeply, and there is a lot of foreshadowing in Chapter 3 that connects to the future, so I think you will notice that. There are also a lot of hand-drawn images of Yamato and other mecha, so please look forward to it. For instance, in a repair scene at the beginning, you can see how the inner hull plating connects to the exterior. 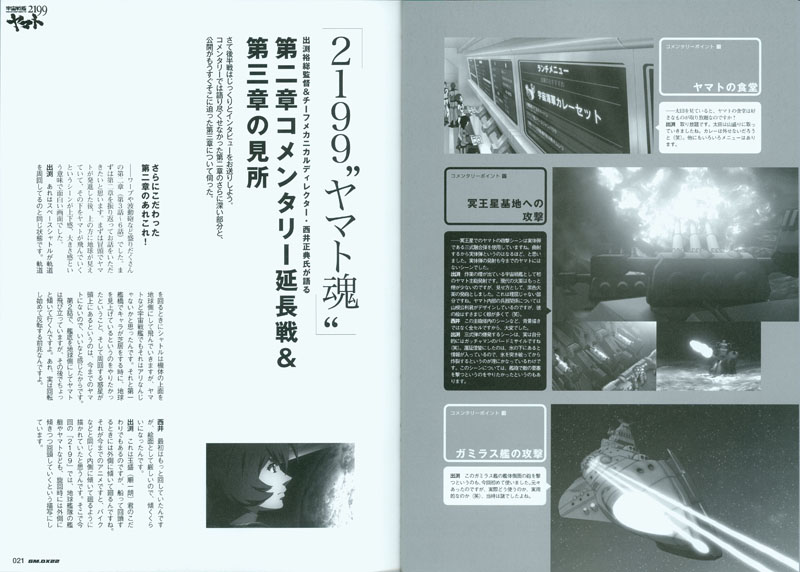 Izubuchi: Episode 7 is the beginning of Chapter 3. There is a farewell party to say goodbye to Earth and the solar system, which was also in the original. The emphasis is on the crew of Yamato and others. Dessler and people on the Gamilas side are shown in Episode 8.

Interviewer: While making use of the essence of the original work, more original elements of 2199 also come into play.

Izubuchi: in Episode 9, a Gamiloid was recovered from Enceladus, and a theme develops about the use of robots that has a different meaning from the past. “What are the various approaches we can take in the Yamato format?” can be considered the direction of this work. I intend to take such a new approach several more times.

Interviewer: And people from Earth meet a Gamilas person for the first time in Episode 10.

Izubuchi: Although so far the crew of Yamato has only met the Gamiloid, they know that people from Gamilas are humanoid. Therefore, the first encounter with someone from Gamilas as a captive has to have a bigger surprise. I think the feelings of anger must be bigger. The thoughts on the side of the Earth people are going to be a big hint of what comes into play in the second half, as well as the circumstances on Gamilas. The density of the characters will increase, but there is also a stillness. We plan to make a solid Yamato, so please look forward to it. 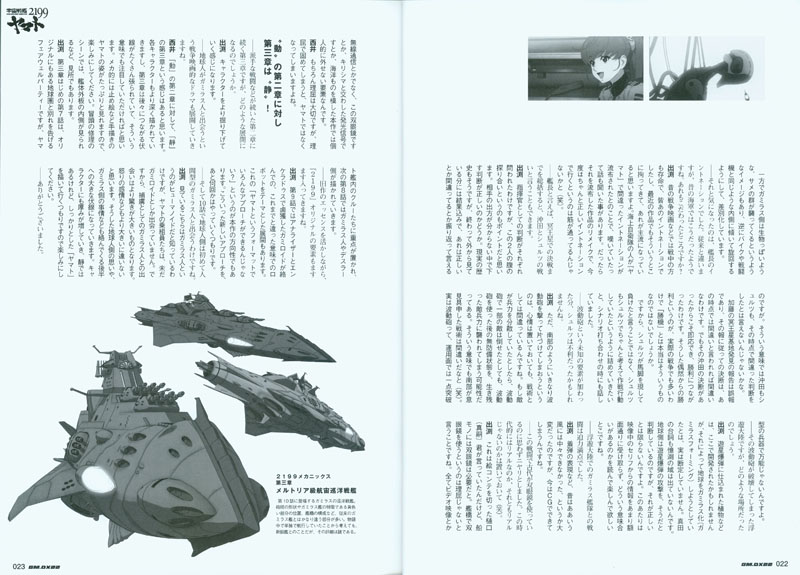