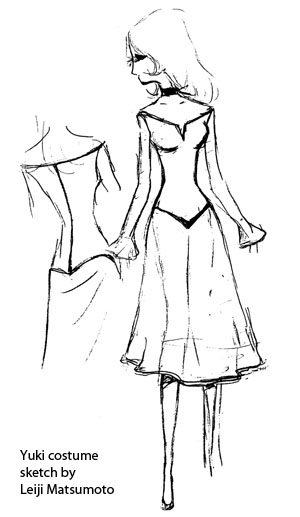 Space has Recovered its Tranquility

The remaining fleet led by Dessler is seeking a new planet to rebuild the great race of Gamilas. Dessler is no longer the ogre of revenge he once was. Seeing the love of Kodai and Yuki, he is fully awakened and now aims at building a new state with the principles of peace and love. In the middle of his voyage, he decides to return to the Magellanic Cloud to bid farewell to the mother planet Gamilas.

The Earth, at the Same Time…

is filled with a zeal for rebuilding. The recovered Yamato crew is released from the hospital. The citizens of Earth welcome them fervently. Kodai and others quickly become heroes. Yamato, as an honored battleship, has been brought to drydock and repaired.

However, a feeling of emptiness touches Kodai.

“The true heroes are Kato, Saito and others. Above all, the most determined victory was obtained by the sacrifice of Teresa, not by Yamato or us!”

And in his eyes appear the figure of Dessler, who left the battlefield in the middle of combat.

“Where did Dessler go?”

In his eyes as well appears the figure of Kodai.

“Kodai, I will build a great state as splendid as the Earth.”

The Eighth Plane of the Sanzar System, Large Magellanic Cloud

There are the familiar twin-planets, Gamilas and Iscandar. The two planets are destined to become extinct. On Iscandar are Starsha and Mamoru Kodai, blessed in their eternal love.

Dessler, who has respect and friendship for Queen Starsha, sends a message. However, the communication is interrupted. At that moment, a mysterious fleet appears, and combat begins. Dessler quickly destroys them and resumes the communication with Starsha. Then he learns the horrible truth; someone is invading Gamilas…

Dessler is astonished. There are dozens of worker ships. They plunge two giant anti-gravity anchors into Gamilas and attempt to tow the planet by gravity beam. Drill missiles strike the surface and dive into the ground.

Dessler becomes outraged and immediately orders an attack. Fighters are dispatched from the enemy’s mother ship and counter-attack.

The face of the enemy commander appears on the bridge screen of Dessler’s flagship. He says no interruption is allowed. Their fleet was dispatched from the Auto Planet Goruba. Their object is to obtain Gamilarium, radioactive materials in the Planet Gamilas. This will be used as energy resources for their fleets and weapons. He says he will tow Gamilas to Goruba.

Further outraged, Dessler attacks again. As a result, control of the anti-gravity anchors is lost, and Gamilas explodes. The enemy worker ships head for the Planet Iscandar. Iscandar has Iscandarium. Though the name is different, Iscandarium is the same as Gamilarium since the crust of the two planets consists of the same components. 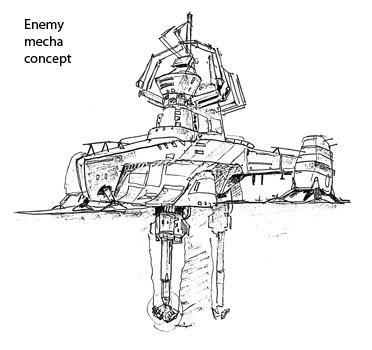 Dessler immediately pursues, and after a severe battle he destroys the worker ships. However, one of the drill missiles bores into the deep underground of Iscandar. This causes a chain-reaction of Iscandarium, and tachyon particles start gushing out through the crust. Iscandar breaks away, departing from its orbit and approaching light-speed.

“Starsha must be rescued. This challenge is the first step of my new way of living.”

At the same time, he informs Kodai of the danger, using emergency tachyon wave-motion communication.

Kodai and Yuki are preparing for their wedding ceremony. Yuki’s heart leaps–the happiness she has dreamed for so long time will finally come true. But Dessler’s report disturbs her dream.

“Isn’t this a trap set by Dessler?”

They don’t know that Dessler has changed his ways.

Besides, Earth has just started its rebuilding operation and has no strength to spare. 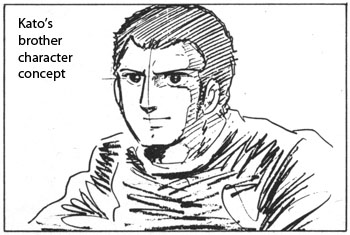 Kodai persuades them that Dessler has changed. The repaired Yamato must be immediately dispatched.

After the battle of the White Comet Empire, the commander of the Defense Force recognizes that peace on Earth cannot exist without peace in space. Everyone is persuaded by the recommendation of Kodai.

Nonetheless, thinking of Mamoru and Starsha, she agrees with Kodai. She asks to go with him. Knowing her decision is firm and unshaken, Kodai permits her to accompany him. Shima, Sanada, Sado and other crewmembers reassemble at Yamato. The new Cosmo-Tigers, led by Kato’s younger brother, also join up. In order to avoid potential disturbance of the Earth citizens, Yamato launches in secret.

The commander of the destroyed worker ships appears on-screen before Admiral Gabochin, and he reports the failure of the operation at Gamilas and Iscandar. Enraged, Gabochin orders Gabov, Chairman of the War Committee, to send a reinforcement fleet. Iscandarium is needed for the inter-planetary war for Uralia, mother planet of the Black Nebula. 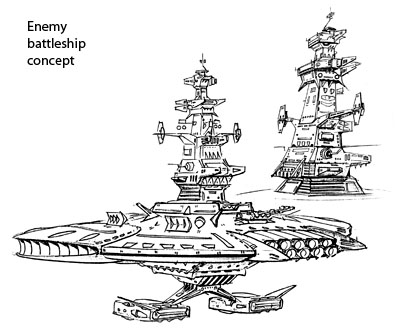 Goruba‘s reinforcement fleet appears in front of them, and a fierce battle develops. Dessler cannot break through to Iscandar, which is now going through repeated warps. Even if it stops, the enemy’s attack prevents Dessler from reaching Iscandar. Furthermore, his fleet takes on too much damage to continue combat.

At last, Yamato appears after several repeated warps. Kodai and Desler reaffirm their friendship. Yamato and the Dessler Fleet both chase Iscandar while attacking the enemy in a joint operation.

They catch up as Iscandar rushes into a cluster of newly-forming stars. Taking the lead, Yamato destroys approaching asteroids and space debris. Kodai calls out to Iscandar frantically. But before making communication, Iscandar falls into the strong magnetic field of the cluster and accelerates into another warp. To keep from losing Iscandar’s trail, Yamato scans ahead and the crew is astonished.

Iscandar is rushing toward a red giant star whose diameter is 600 times that of Earth’s Sun.

At the Auto Planet Goruba, Admiral Gabochin explodes in anger at the situation, and decides to personally intervene. (Writer’s note: we need to examine the chain of command and personality of characters in Goruba.) 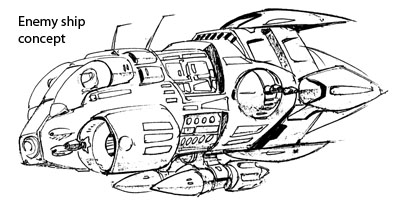 Sanada calculates that Iscandar is becoming exhausted from the repeated warps, and will soon explode. Mamoru and Starsha must be rescued as soon as possible.

Kodai fervently calls to them.

On Iscandar, Starsha wishes for Mamoru to evacuate. She is prepared to die for the planet where her people rest. Mamoru, knowing her determination, decides to stay for the sake of their love. At this moment, a message comes in from Yamato. Two brothers make contact after two and a half years.

Kodai requests that they evacuate, but Mamoru’s reply is cold.

“I am not an Earthling any more. I will share in the destiny of this planet as long as Starsha remains here.”

Yamato Works Out a Countermeasure

Whatever it takes, Iscandar, Mamoru and Starsha must be rescued. Sanada proposes to decrease the pressure by releasing the planet’s tachyon particles. It will be necessary to make holes in the planet’s crust and decrease the force of the gushing particles. But is this possible in the midst of combat? 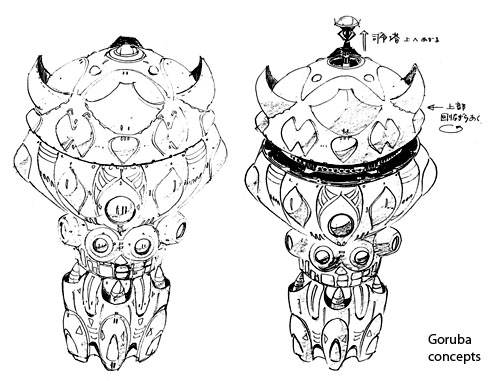 A fierce attack from Goruba begins. Yamato and the Dessler Fleet both struggle against the overwhelming power of the enemy. Admiral Gabochin appears on the monitor of Yamato, and he requests a cease-fire.

Kodai and others strongly criticize the vicious action of the enemy.

“Evil is justice. Talk of peace and love are laughable. We shall make the entire universe a world of vice.”

Goruba resumes the attack. Yamato and the Dessler Fleet are severely damaged.

Starsha watches the battle and is filled with sadness.

“In order to save us, they will lose their lives.”

Starsha leads Mamoru and their baby Sasha (Note: Sasha is not shown here yet.) to a room equipped with an evacuation system. She leave the room and pushes the launch button.

Starsha sadly sees them off, then uses her remaining psychic power to stop Iscandar. (Note: she did not do this earlier because she wanted the enemy to tow the planet).

Yamato rescues Mamoru in the middle of the battle. They hear a message from Starsha, an announcement of surrender. Leaving the astonished Kodai and others, Goruba ceases fire and descends to the surface of Iscandar.

Starsha, who remained there alone, expresses her farewell to Mamoru and tells Yamato to escape immediately. She descends to the underground block and activates a destruct system connected to Iscandarium.

The Planet Iscandar Scatters to Pieces

The Auto Planet Goruba is finally destroyed as well.

Kodai, Mamoru, and the others gaze at the image in tears. Mamoru holds Sasha, the daughter of Starsha and himself, in his arms.

Yuki tells Kodai a new life is inside of her.

Dessler also sees the image of Starsha, then he sets off, promising Kodai they will meet again.

But Yamato is being watched…

by cold eyes from the mysterious Black Nebula, Uralia.