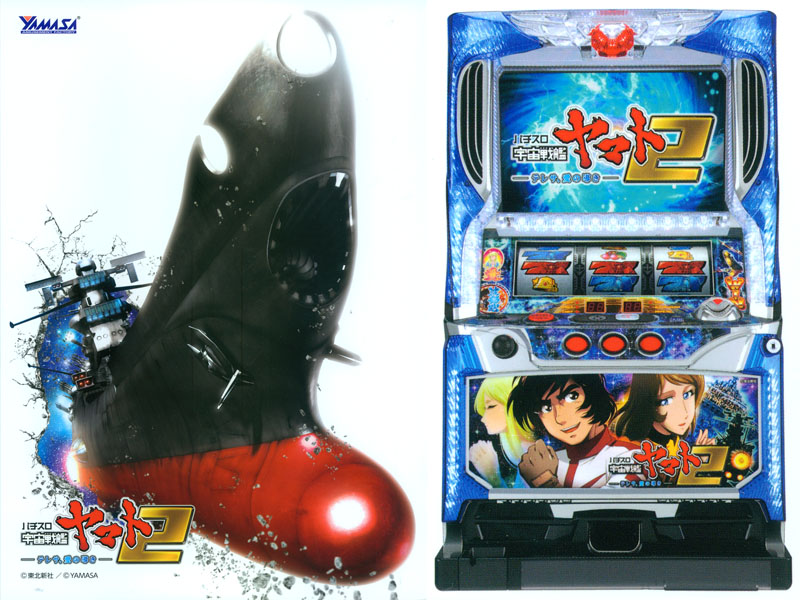 One thing you can count on if you’re somehow able to visit Japan in the distant future is that if the nation still rides above the waves of the Pacific, you’ll find pachinko games there. One stroll through any neighborhood in Tokyo will convince you of that–pachinko parlors and casinos are as common as convenience stores in the US (and convenience stores in Japan are as common as stop signs here, but that’s another matter).

Wherever there is pachinko there is the promise of cash, and that makes it natural territory for lucrative tie-ins with anime. Space Battleship Yamato has been a pachinko mainstay since 2007, when the Fuji company introduced its first Yamato-themed game and put the franchise back into the public square. Since then, they’ve had an ongoing volley with the Yamasa company, and February 2013 brought the latest salvo: Yamasa’s Yamato 2 Pachislo. 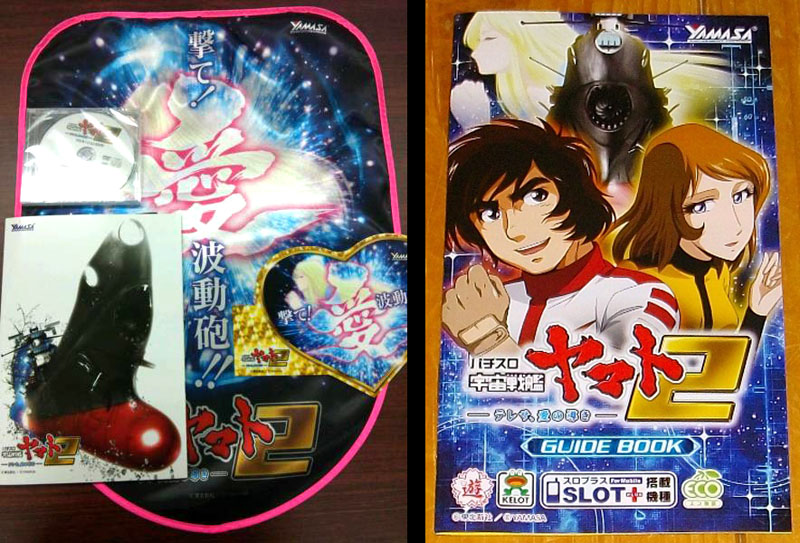 Above left: promotional kit with a custom seat cover. Above right: guidebook pamphlet

Pachislo is a variation of pachinko that still uses the spinning numbers of a slot machine, whereas modern electronic pachinko puts those same numbers on a video screen. The style of gameplay changes as a result, and there are no doubt generations of purists who prefer one over the other. Either way, the games themselves are generally impenetrable to those outside Japan, so the attraction for the rest of us is how they turn our beloved Yamato into a game experience.

Yamasa’s first Yamato game, based on Series 1, rolled out in February 2010 and caught the eye of longtime fans for its lively, energetic take on the original. Keep in mind, Yamato 2199 was still over two years away, so it was one of the few opportunities at the time to see the classic anime reinterpreted with modern techniques. Its production values fell far short of 2199, but still make for an interesting time capsule (which can be opened here).

And now, exactly three years later, we’ve got the followup with this new game based on Series 2. This is far from the first time Yamato 2 has been transformed into a game (that ground was broken by Sony’s Playstation in May 2000), but any chance to relive the battle against the Comet Empire in a fresh way is always a welcome one.

The first word of this chance arrived in the form of a 1-minute teaser video on December 4, 2012. The flowery subtitle “Teresa, the Guidance of Love” was contrasted by a dynamic, hard-edged presentation lead by the word REVENGE and backed by the piercing strains of Animetal USA’s cover of the Yamato theme.

The next dose came a week later when Yamasa released a promotional kit and went live with an official website. The kit consisted of a large-format foldout flyer (about 12″ x 32″ when fully opened–as shown higher up this page) and DVD containing a 7-minute promo which made liberal use of Animetal USA’s cover.

See a portion of the DVD here. 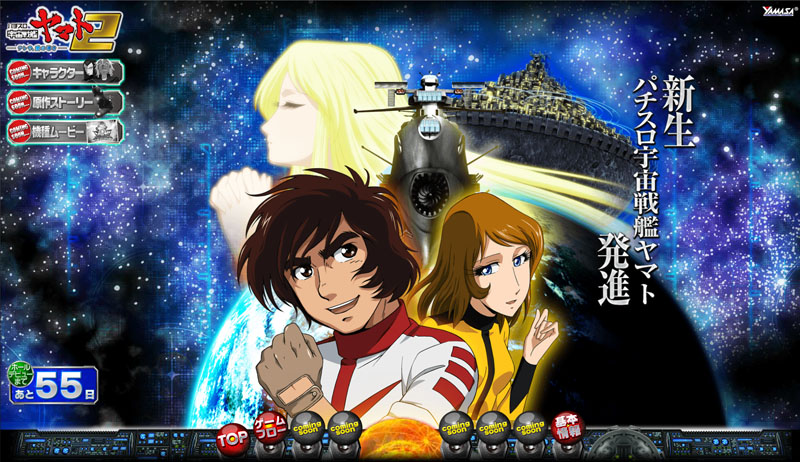 The website started as a modest affair but quickly loaded up with features that explained the game as well as the story and characters. All the art in these games is custom-made, and thus subject to modern standards. This means the mecha is all done in CG and the characters get a makeover that matches the look of modern TV anime–in this case the kind with a budget somewhere south of 2199‘s. Regardless, it’s always enjoyable to see a new take on an old fave, so you are encouraged to spend some time exploring the site here. 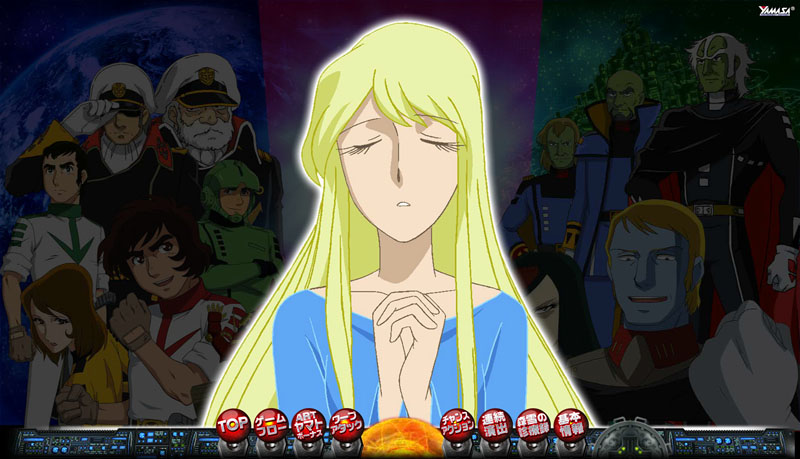 Pachinko is a VERY noisy pursuit, and the need for a new game to stand out results in promotion that trades substance for sound and fury. Thus, it’s difficult to get a sense for how the story functions in concordance with the gameplay. But we can get a hint of that from snatches of the many freshly-animated cutscenes in the promos. At their best, they recapture the spirit of the original with gorgeous new techniques. But what we remember most about that story was its emotional impact, and that doesn’t quite come across when you’re treated to a Wave-Motion Gun blast every 15 seconds.

Unless the cutscenes are someday released on their own, we may never see farther than the tantalizing bits included in the promo. (And in case you’re wondering, no cutscene collections from previous games have found their way into the light yet.) So for now we can absorb the sound and fury with the heartwarming knowledge that the spirit of Yamato 2 has NOT DIED!

Yamato 2 Pachislo was released to the public on February 4. 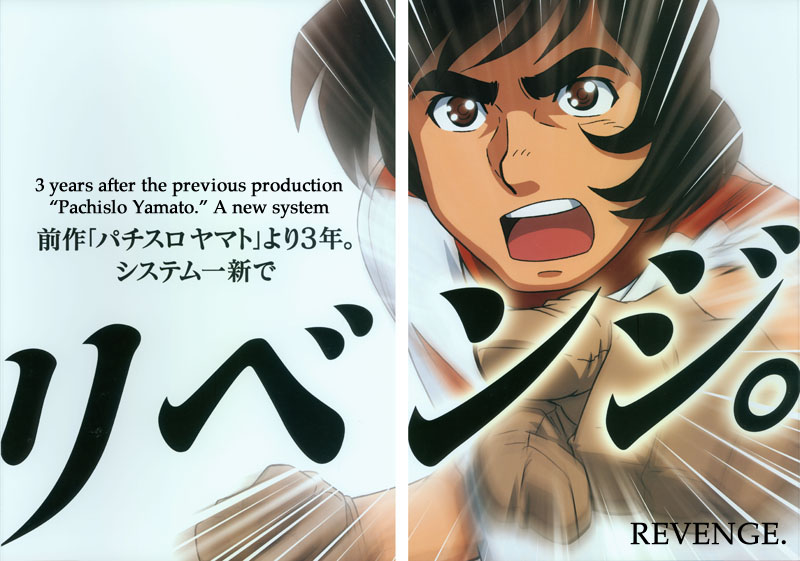 Click here for a gallery of stills from the cutscenes, as seen on the promotional DVD. 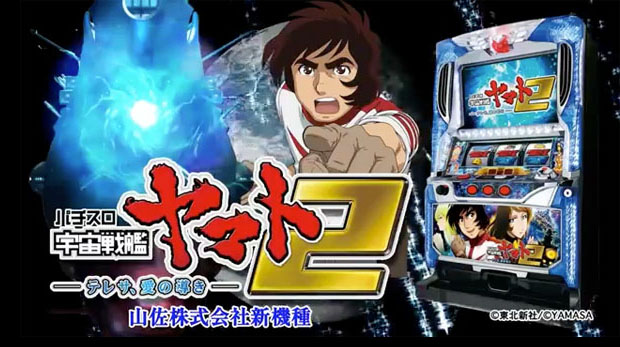 The Guidance of Love 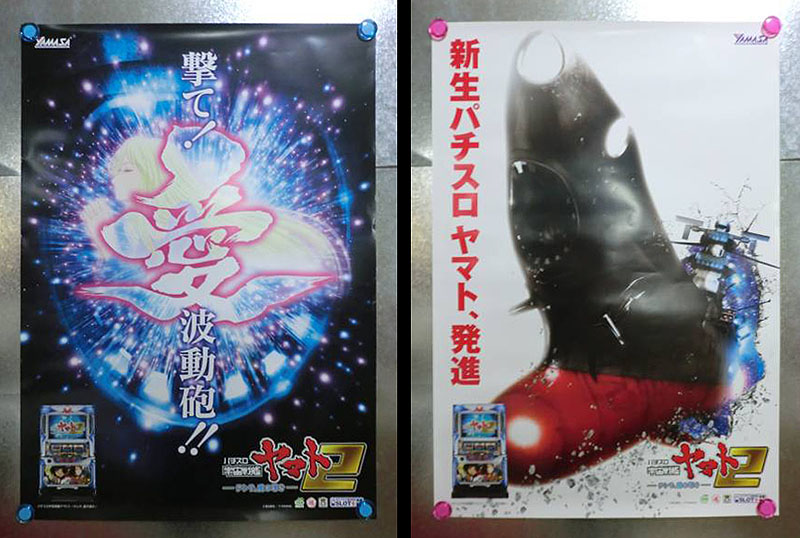