Leiji Matsumoto is known far and wide as one of the world’s pre-eminent anime and manga artists. Elsewhere on this website, we’ve presented a snapshot of his early career achievements, and all you have to do to see his later work is dig around in your local video store. There, you will find stories that weave in and out of each other in all sorts of nebulous ways, which fans have been discussing and debating for decades.

As Matsumoto worked with Yoshinobu Nishizaki to shape the Space Battleship Yamato storyline, he saw it as another pillar in the great pantheon he was building, and as such it was instilled with subtle links to his other works. The evidence is alive even today, with Yamato making cameo appearances in recent programs like Galaxy Express 999 and DNA Sights. Of course, there is also his entirely new take on the Series, called “Great Yamato,” which will give a whole new generation a taste of this peculiar and labyrinthine magic when it finally reaches Japanese television.

Meanwhile, here is another example of how prolific Matsumoto’s imagination can be. During the production of the first Yamato TV Series in 1974, he was still moonlighting as a manga artist, and he single-handedly wrote and drew a comic strip version of the TV show he was directing by day. What kept it fresh and enjoyable for him was the freedom to bend and twist the story to satisfy his own whims, and the result was akin to a director’s cut as we understand the term today. The manga version of the story is substantially shorter, with many adventures omitted for the sake of a timely publishing schedule, but there are many fascinating additions and alterations that would have made for a different experience had they been included in the anime. Let’s take a look at them one by one. 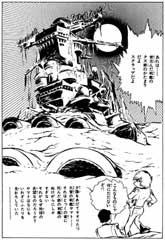 Here, Wildstar and Venture get their first look at the iconic shipwreck of the 20th century Yamato. What’s notable is that they aren’t wearing spacesuits, as they do in the anime. What that indicates is that Earth still has a breatheable atmosphere, and isn’t quite as far gone after the planet bombing. Either that, or Matsumoto didn’t feel like drawing the spacesuits. 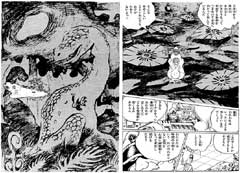 Here’s Yamato‘s first space warp from Earth to Mars, which gives us some vintage Matsumoto psychodelia. You may remember the dinosaurs from the anime version, but the giant lilypads are unique to the manga. 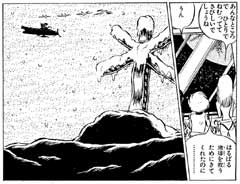 After the space warp, Yamato passes Mars, where on the surface we see a makeshift gravesite. It is for none other than Astra (sister to Queen Starsha), who died to bring wave-engine technology to Earth. Doubtless this would have been a very dramatic moment if it were included in the anime Series.

A very minor addition, but interesting: a member of the engineering crew reports from an emergency repair situation, wearing safety gear that we never saw in the anime series. 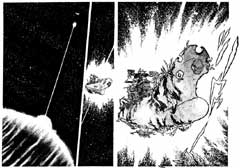 As Yamato approaches Pluto, the Gamilon reflex gun takes a potshot, and destroys the ship with a direct hit!! This could have been the shortest Yamato story in history, except we find out on the next page that it was merely a dummy target, like the one destroyed in the TV Series by the Balanosaurus. Gotcha! 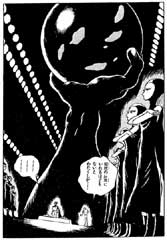 Deep inside Desslok’s inner sanctum on Gamilon, a giant sculpture reveals that (a) Gamilons have actual culture and (b) they’re pretty serious about taking over the galaxy. This sculpture design was actually developed for the anime Series, but never made it to the screen until Yamato 2199 in 2012.

In the best-known of all the “might-have-been” scenes, Wildstar takes off in his fighter to investigate a pirate ship that crosses Yamato’s path. Inside, he meets the cloaked and mysterious Captain Harlock, who asks him to remove his helmet. Harlock is surprised, and seems to recognize Wildstar. Harlock lets him go in peace, pausing to say something meaningful, but stopping himself before the words come out. Wildstar is puzzled, but nothing more is said. The common wisdom about this scene is that, had the TV Series run to its intended length of 52 episodes, Captain Harlock would have been part of it, and we would have learned that he was actually Alex Wildstar. Obviously, this would have made for a very different line of continuity in later Yamato films.

Near the end of this manga version, things on Earth are getting very grim, indeed. After long months of waiting, one faceless individual in the command center takes his own life. Suddenly, an object is spotted falling into Earth’s atmosphere and a retrieval device is sent to fish it out of the ocean (in the manga, remember, the Earth isn’t quite as barren as in the anime.) It turns out the object is a message capsule from Captain Avatar, who fills everyone in on Yamato’s progress. This device must have brought immense relief to Matsumoto, too, who used it to move rapidly through all the business of destroying Gamilon and reaching Iscandar. Shortly after this scene, the manga draws to a close that pretty much matches the last TV episode. Perhaps the greatest tragedy is that the capsule didn’t arrive before that poor guy shot himself. Timing is everything, even in 2199 A.D.