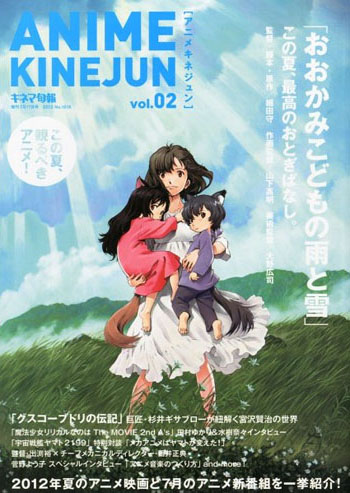 Kinejun is a long-running magazine in Japan that specializes in film with a wide spectrum of news, reviews, and interviews. (The full name, Kinema Junpo, translates to “Cinema 10-day Report”.) In 1978 it became the first mainstream magazine to publish a cover story on the Yamato phenomenon. Anime Kinejun, as the title suggests, specializes in anime coverage, but as a spinoff it is much newer, having debuted in June 2011. So far, only one issue per year has been published.

The Unknown Truth of the Yamato boom

Interviewer: Space Battleship Yamato started broadcasting in 1974 and lead to a boom. Please tell me how you two encountered Yamato.

Izubuchi: In fact, Yamato didn’t experience a boom at the time of its broadcast. Only some of the people rose up to it.

Izubuchi: People like me and Mr. Nishii said, “this is great!” and rose up. I was a high school student in those days. My class wasn’t into it. Even when I told them, “Yamato is amazing,” they told me they were watching Heidi on another channel, so they didn’t care. (Laughs) It was in reruns that Yamato caught fire in the true sense of the term.

Nishii: At the time of reruns, an episode came on every evening, Monday through Friday. They ground through every episode, broadcasting from the first to the last.

Izubuchi: I dashed home after school was over. Naturally, I was through with extracurricular activities, too. (Laughs) 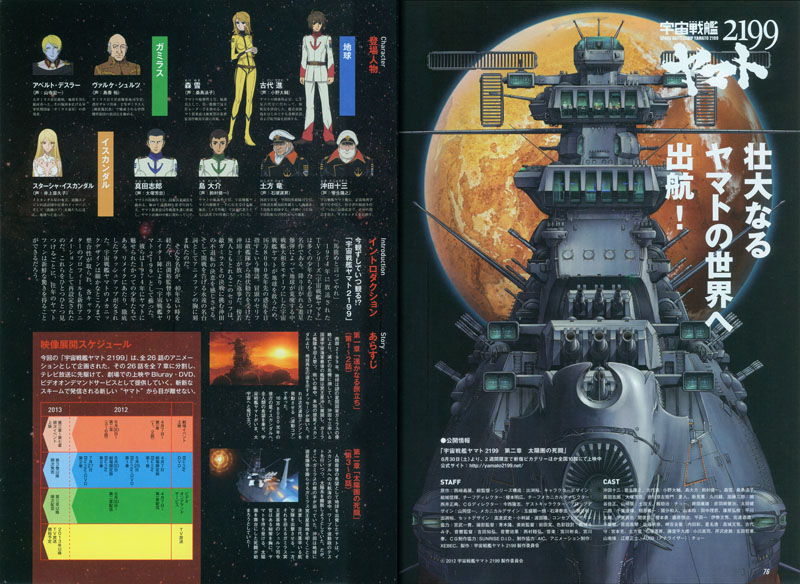 Interviewer: That was a time without recording equipment.

Izubuchi: That’s right. There was no way to record a program and watch it again. There was no way but to hope for a rerun. I missed the first episode of Space Battleship Yamato, and I was really impressed when I finally saw it in reruns. But there was no telling when there would be another rerun, and it might never come again. In other words, anime and us was a once-in-a-lifetime chance in those days. The spirit is different when you don’t think you can see it forever. Our eyes were dinnerplates and we had Dumbo ears in place of a camera and a recorder‚Ä¶

Izubuchi: I took photos of the screen with a camera and recorded the sound on cassette tape. I’d listen to the tape recording before going to bed. Then all the lines and music would enter my head! Using this timing set to this music would make it more natural, I thought. And as I got interested in wondering who the staff would be, I did the opening and the ending in my head.

Nishii: I wrote it down in a memo book!

Izubuchi: Right! In addition to Yamato, we knew other anime like Brave Raideen. We created a so-called “filmography.”

Nishii: After several reruns, the theatrical version was shown in 1977 and the global excitement for Yamato surged after that.

Izubuchi: But as for me, I had already risen to it long before. Therefore, about friends who came in after the boom, I thought, “doesn’t he have a bright face despite not watching the first broadcast?” (Laughs)

Interviewer: What was it like when you first saw the mecha?

Nishii: The treatment of mecha was different from other anime of the time. For example, every scene of Yamato‘s launch showed the procedure really well. In other words, Yamato depicted a relationship between humans and mecha. Yamato demonstrated that great mecha makes use of human ability.

Izubuchi: As a design, Yamato was already completed from the beginning. In fact, in space ship design, there is a line called “before Yamato/after Yamato.” Before Space Battleship Yamato appeared, there were no spaceships with dense linework or intricate detail in either anime or live-action film. Spaceship designs were all assumed to be streamlined shapes like a disc or a rocket.

That changed with the appearance of Yamato. In Yamato, the spaceship is a “ship,” and it’s standard to have a bridge and turrets. Look at spaceships after that. For example, the Magellan and Salamis from Mobile Suit Gundam (1978). And in other countries; The Star Destroyer from Star Wars has a bridge. It was Yamato that brought the “ship shape” to spaceship design, adding on the battleship and aircraft carrier direction to it.

Interviewer: It changed the consciousness of mechanic design for spaceships.

Izubuchi: That’s right. However, while we made spaceships in that manner post-Yamato, we unfortunately lost the Yamato design sense. Speaking of the sophisticated spaceship design of the original Yamato, the subsequent Andromeda (the new battleship from Farewell to Yamato) was superior. But as for the battleships of Mobile Suit Gundam, sequels appeared after the first series that continued to do brush-up and evolved them by adding information.

Because Yamato was completed from the beginning, there was never any brush-up of the original, and it came to be thought of as “old” to the rest of the world. Therefore, we’re doing Space Battleship Yamato 2199! How great is the original design? We’re doing this to revisit it. 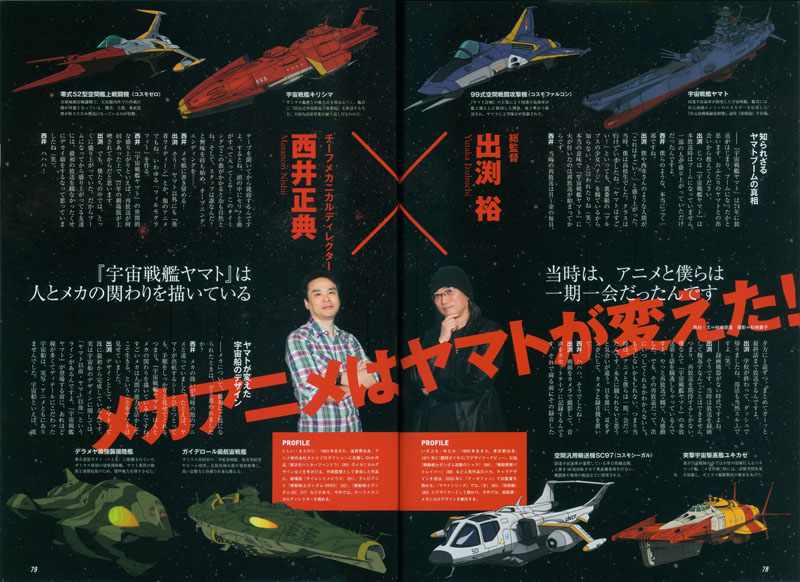 Interviewer: How has the design work been pushed forward by that thought?

Nishii: There are no significant changes to the external design, but we boiled down a lot of the details. This time we asked Mr. Junichiro Tamamori to brush-up Yamato‘s appearance. The opportunity came up when Mr. Izubuchi found his designs on the net. “Look at the Yamato this guy has drawn!” When it was put in front of me, I thought it was amazing.

Izubuchi: This happened before the production of Yamato was decided. “If I get to make Yamato now, it’s going to be with Nishii-san and this guy!” In other words, it was a delusion. (Laughs)

Nishii: At the time, I didn’t think it could be made.

Izubuchi: A dream within a dream. (Laughs) I always talked about it happily, but in the end I would conclude that, “There’s no way we can do a remake.”

Nishii: That was true.

Interviewer: What was it that attracted you to Mr. Tamamori’s Yamato?

Nishii: The original design was properly digested and the parts were increased logically. I was attracted to how the attention to detail was justified. The moment I saw it, the instant impact was that nothing could match this, and I wanted to reproduce the images. I felt that if it was this Yamato, wouldn’t everyone want to see it?

Interviewer: How did you brush up the new Yamato? Please tell me something specific.

Nishii: The basic design hasn’t changed. Although the elements of the film are made with CG, I have Mr. Tamamori design the details and add them by hand. Whether it’s a real thing or not, our aim is to bring it up a level where it seems that way.

Izubuchi: Because I’m a designer at heart, I closely watch what happens with the art for the battleship. For example, how does it store and launch its fighters? The Black Tiger for instance (which has become the Cosmo Falcon in this remake), launches contrary to Yamato‘s direction of movement. In most cases, the enemy is up ahead. If you launch toward the back, you then have to turn all the way around.

When you consider the motion of Yamato cruising along a vector at high speed, it’s an extreme waste, and kind of strange. Therefore, the image this time is to drop backward out of the rear specifically so it doesn’t have to circle the ship it just launched from, and it uses the motion of Yamato to accelerate along its vector. The Cosmo Zero exclusively uses the catapult, and we solved a problem in the original by having it rotate, which wasn’t done before.

Another problem is the issue of size. The length of Yamato on the original design sheets was 264 meters, and in this form there isn’t enough room to stack the fighters in tiers when they return. Actually, I heard from Kazutaka Miyatake, the mecha designer of the first series, that the first generation Yamato‘s interior was going to be made with much more space.

To go into it further, while shooting for a length of 264 meters, they started out calculating it to be 330 meters, and doubled up the interior measurements. Therefore, it wasn’t just the hangar, but the bridge was also too wide, and the ship’s side observation room where they had a party was as big as a hotel banquet room! (Laughs) That was designed by someone else. (Kenichi Matsuzaki)

[Translator’s note: click here to visit a fansite that uses diagrams to confirm this notion of arbitrarily doubling the interior sizes.]

Nishii: If that were the real size of the observation room, Yamato‘s full length would have to be over 1000 meters.

Izubuchi: This time, the length in Yamato 2199 is set to 333 meters. And we kept it in mind to make the interior compatible with the exterior. Therefore, even though 333 meters is longer than the original concept, conversely the bridge is narrower.

Nishii: That narrowness gives it a reality. We had to give it the feeling of cramming the functions into a small space and work out what life is like while on duty. Even a real ship is narrow, and is sized like this. The reality is that passages and rooms are all narrow. 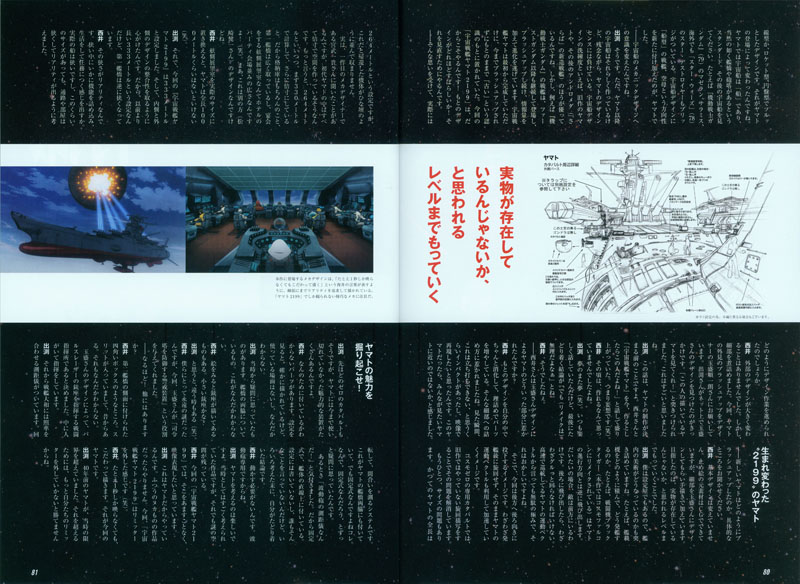 Quote in red text: “We take it to a level that assumes these things to really exist”

Dig up the appeal of Yamato!

Izubuchi: Like the catapult for the Zero that I mentioned before, there are many attractive devices that were not used until now in Yamato.

Nishii: There were parts whose purpose was not understood. Even though they were certainly drawn in the design sheets, they weren’t used in any scene, and we didn’t understand them.

Izubuchi: There are things we’ve wondered about since those days. Things attached to both sides of the ship. We didn’t know what they were.

Izubuchi: And sometimes, I thought it was something else. (Laughs)

Nishii: It was an eternal mystery to us, but Tamamori said it was “a warning system to protect the control tower.” That’s the role it was given.

Interviewer: I see! Anything else besides that?

Nishii: Something like a square box was attached to the side of the second bridge. It was from the old days, and had a slit. I didn’t know what that was, either. In Mr. Tamamori’s design, he decided that it was a combat command post to direct the pulse laser turrets. There’s a person inside it giving instructions.

Izubuchi: The Battleship Yamato was equipped with a range finder to aim with. It was a system that rotated and measured distance. Both of the arms of Yamato‘s bridge deck have this, but it’s a stationary type. I wondered why it would be in a fixed position, and realized that “it’s the range finder for the Wave-Motion Gun!” Therefore, it would be fixed in a straight line with the ship’s hull. It wasn’t written on the design sheet and nobody said such a thing, but after thinking about it in various ways, that’s the conclusion I arrived at.

Nishii: It’s not necessary to move it. It’s exclusively used with the Wave-Motion Gun.

Izubuchi: It’s fun to think about Yamato. I’ve thought a lot about it over the years, but nonetheless there’s still room for mystery.

Nishii: In Yamato 2199, I want to express an image that doesn’t leave that out.

Izubuchi: That’s why we’re doing Yamato. If it was just another mecha thing, I wouldn’t do it. With Yamato 2199, it feels like the limiter has been removed. (Laughs)

Nishii: Even if something appears for only one second, I draw it scrupulously. That is this Yamato.

Izubuchi: The Yamato of forty years ago exceeded all the limits of its time. We can’t surpass it if we don’t remove more of the limiters.