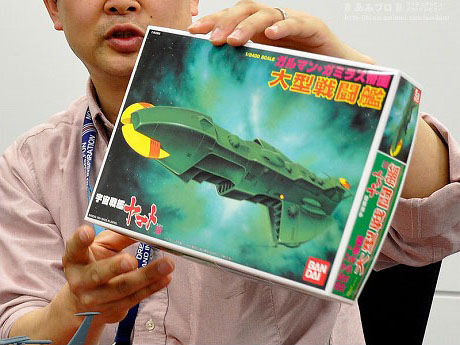 Why are they 1/1000 scale? The history of anime plamodel as seen in scale indication from Yamato to Gundam.

Kishiyama: Speaking of plamodel, Mobile Suit Gundam came up earlier, and in the history of “character-oriented models,” Space Battleship Yamato is the ancestor of Gundam. On my desk, I have a rerelease of a model kit from that time, and it has a scale of “1/2400” inscribed onto it. [The Galman-Gamilas battleship from Yamato III, pictured at right.] Prior to Yamato, anime plamodels didn’t have such an indication.

Interviewer: Although now it’s a concept that is natural to plamodels‚Ä¶

Kishiyama: However, the point where Yamato and Gundam differ is that Gunpla tends to be produced in 1/144 scale, which ends up giving the impression of, “A big robot is this big compared to a small robot.” So, when you collect the models and then have fun visually comparing them, it establishes a certain nuance to the word “scale.” Since Yamato came out a while before Gundam, even plamodels of mecha that appear in the same show were released in wildly varying scales. 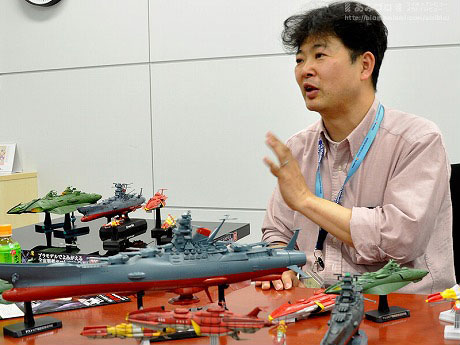 Kishiyama: Previously, the first thought was, “how much this ship will sell for?” and the ship was made at the maximum length for the value, and then because the design for the ship was X meters long, they would count backward from there to reckon the scale. Instead of establishing the collection at the same scale, the size was decided by the framework of the price, which was the center of the sales strategy at the time. The idea of “enjoying plamodel side by side at the same scale” was not a value of Yamato, which was the first to have scale notation, but it was part of the flow that was improved afterward with Gundam.

Back then, a total of 30 “Mecha Collection” kits were sold for 100 yen each (now 210 yen with tax), and because the product was made on the basis of the box size, they were all about 5-6 cm. In those terms, though it was considered a collection, the contrast between large ships and small ships was unknown.

Kishiyama: For the Gundam plamodels that came later, it was discovered that the value came from the uniformity of scale, and this time we’ve carried out the feedback from Gundam in reverse to develop and unify the 2199 model series at 1/1000 scale. 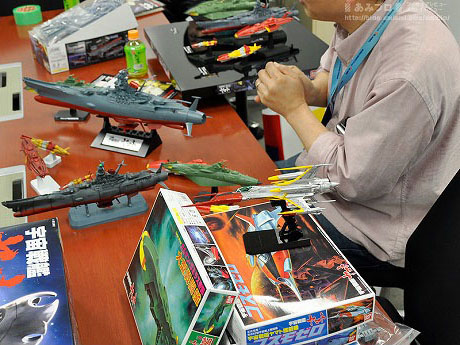 Interviewer: The standard scale for models of naval vessels is 1/700 as represented by the so-called “waterline” [translator’s note: the term used for ship models from Tamiya that omit the hull below the waterline], so why was the smaller 1/1000 scale adopted for 2199 plamodels?

Kishiyama: In the original, when the characters boarded the ship it doubled in size. Although the outside was 265 meters, it didn’t make sense considering the width of the bridge and the rooms unless the ship wasn at least 500 meters long. That always seemed to be kind of the prevailing view among those who loved Yamato. 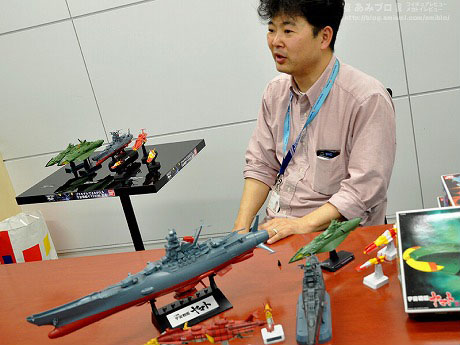 Using a question like, “Does the hangar fit properly into the hull” as an example, the intention of director Izubuchi and others is to solve the previous design discrepancies in 2199. 3D models were created in the preproduction of 2199, and rebuilding the size balance started with, “how many people of X height can line up in the bridge, and how wide are the consoles when they line up?” and from there the minimum necessary size of Yamato was determined to be 333 meters long.

Interviewer: The bridge certainly feels narrower in 2199, but I didn’t know it was set up so scrupulously.

Interviewer: Now that you mention it‚Ä¶! Across the Yamato saga, reality has caught up with science-fiction.

Kishiyama: However, the original plot point of “the Battleship Yamato discovered in the dried up seabed was converted into Space Battleship Yamato,” and the image of it bursting out of the ground and launching absolutely could not be removed in 2199. That point had to be solved by all means. 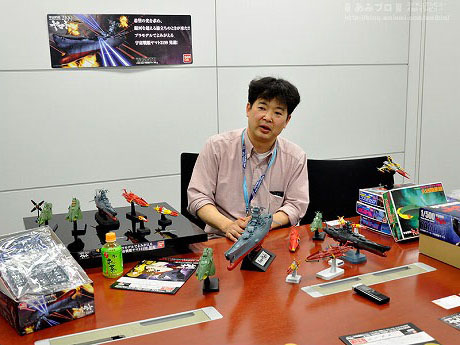 Therefore, in 2199 they say that “it is camouflaged and built in the form of Battleship Yamato, the sunken battleship itself is not used.” First of all, however you may think about it, the design of Space Battleship Yamato doesn’t match Battleship Yamato. It seems like they made the 2199 anime with the idea from the start that the ship had been built a bit larger. Even in the designs, I wanted to make this “contrast” important, to do in Yamato what was normally done in Gundam. And so, in this way, I went from there to ask the question of what scale would be suitable for the 2199 series.

At present, Yamato, the Earth Fleet set, the Garmillas ship set, and the Cosmo Zero are now on sale. Although these are equivalent or smaller than Yamato, the multi-deck carrier and Dessler battleship which appear in the second half are larger. And like Yamato, the Kelkapia and Destria-class ships have grown larger than the designs of the original work.

Interviewer: There’s a good feeling of volume when they are lined up this way. When the bigger ships appear later, the sizes might have become inflated if the first Yamato that set the standard was too large. 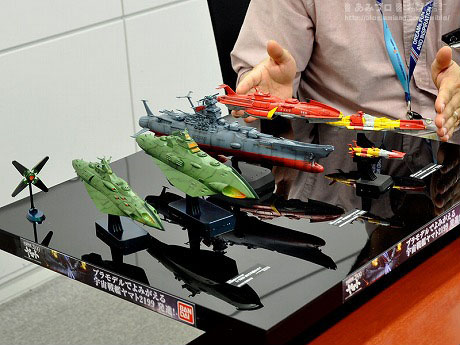 Kishiyama: When the big Garmillas ships to come are lined up to scale, their relativity will show that the ships of the Earth fleet have absolutely no way to win, and when I realized that I came to the conclusion that 1/1000 scale was appropriate.

Kishiyama: About 30cm is a good size for desktop display. If the 333 meter Yamato was made in the 1/700 scale widely used for ship models, it would become quite large.

Kishiyama: If such a Yamato were made, it wouldn’t be a problem to arrange the smaller Earth fleet ships around it, but at that size it would be a bit impossible to make a multi-deck carrier to scale with it. By centering Yamato at the 30 cm level, the smaller ships such as Yukikaze and Murasame can also be a satisfactory size. The scale was chosen with the thought that they can all stand together as a product line even if larger ships come out later. 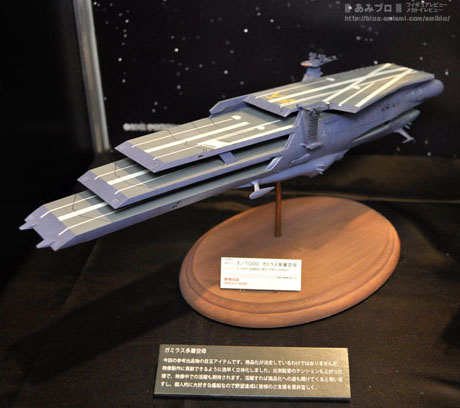 Gare Gamilon! Will the Garmillas Empire devotees be satisfied? The future lineup

Interviewer: Please talk about the new products that will come out after the broadcast in April.

Kishiyama: The multi-deck carrier and the “Shulz Battleship” we displayed at the All-Japan Model Hobby Show in the fall of 2012 were very well received, but at the time the release decision hadn’t been made yet. With the ongoing theatrical presentations and the recent broadcast decision, I intend to continue striving for the realization of the dream. The cross-shaped Polmeria-class astro assault carrier will launch in May. It’s the first mothership that was sent by the Garmillas in Chapter 1 to expel Yamato, which was camouflaged as the Battleship Yamato. We made the product since that ship was the first opponent Yamato fought near the beginning of the April broadcast, and it will be active again in the second half.

I think some users will ask, “why that ship?” “That ship before others?” Needless to say, although it’s not a high-class item like Yamato or Dessler’s ship, doesn’t it also have the implication of, “if a ship like that gets merchandised, maybe this other ship, too‚Ä¶”? Since everyone has waited so patiently, the Gaiderol-class astro space battleship will come out in June. 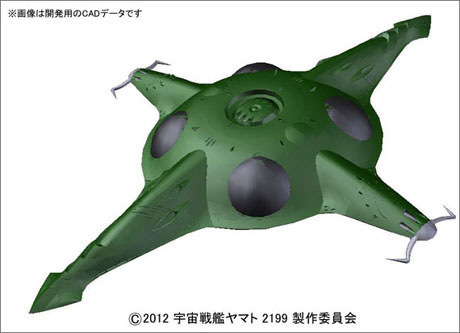 Interviewer: Le Chevalier! The Gaiderol-class battleship that Shulz boarded in Episode 8 of 2199 is absolutely something a viewer would want. But it wasn’t released previously, because it wasn’t such a popular ship‚Ä¶

Kishiyama: It is fitting with respect to the turn that appeared in 2199. The items of the despicable Garmillas Empire are going to increase steadily with the progress of the story. It should delight the “Garmillasy” people like director Izubuchi. (Laughs)

We released Garmillas Warship Set 1 in January, and in response to its popularity, I want to grab on and strive farther forward. When they’re all lined up afterward, “it’s good to have this ship” and “it grew into a substantial lineup” should certainly come up. At the moment some might ask, “why is that in the lineup?” but I think the broadcast and the plamodel series can support each other. The Polmeria-class mothership which we plan to first release in May is already fairly large in size.

Interviewer: If I were to guess, it has at least a 30cm diameter, which would probably make it a real armful for an adult, wouldn‚Äôt you say? How exactly do you display something like this? 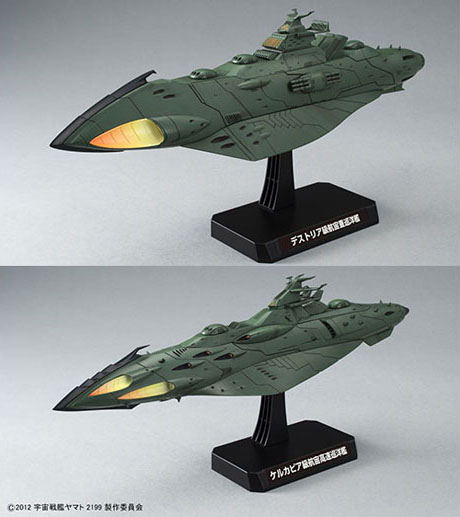 Kishiyama: The stand that was already released with the Cosmo Zero is compatible with other items. The standard socket in the belly is common, and the height and bank angle can be adjusted effectively. Of course, it will be compatible with the Garmillas ships.

Interviewer: The height adjustment stand of the Cosmo Zero is the same “Action Base 1” mechanism of Gunpla. It’s easy to attach and align it, and displaying movement such as a banking scene is very cool.

Kishiyama: The stand of the 2199 plamodel series and the standard “Action Base 1” of Gunpla are the same, and it can be used basically for everything except the smaller ships like the Yukikaze from Earth Fleet Set 1. You can use the pedestal options to display it spatially. You can also change the height and display it in formation, and of course it also corresponds to the optional “Action Base 1” stand that comes with the Polmeria. By using the shape of the point where the belly flares, it’s made to fit the joint and it can be displayed for angle and height. Although it’s very large when placed with others, if you figure out how to use the pedestal options, I think it can be arranged with other ships without becoming obstructive.

Interviewer: An “Action Base” is easy to get, and someone who builds plamodels will have one. As a user, being able to follow an item you can purchase separately is a real lifesaver.

Kishiyama: The Gaiderol-class astro battleship (Shulz’ ship) mentioned earlier will come with a Kripitera ship. The feeling is that the enemy ships of the early stage are being assembled.

Interviewer: From the Destria-class astro heavy cruiser to the Chevalier and Kripitera ship coming together in June, the pivotal battles with Shulz in 2199 can be completely reproduced! This is hot! And for the Shizuoka hobby show in May, you’ll be exhibiting the Meltoria-class astro battle cruiser and Dimensional Submarine UX-01! While we can only show it here with a mosaic over it, it’ll be unveiled publicly at the convention center in Shizuoka.

Kishiyama: I’d like to think that when these and the Super Dreadnought first-class astro battleship Domelus III, which is 700 meters long, are brought together and lined up as a fleet, “you can really commercialize that?” will be the big thing said at the next Shizuoka hobby show exhibition. Anyway, I’d like you to come and see this force. I think you’ll feel a sense of grandeur with the amount of materials displayed for Yamato 2199. As the theatrical exhibition progresses and the product releases continue, it’s important for those who love Yamato to spread the feeling that “it’s a festival now,” and get more people to participate in that festival. By all means, please come to the Shizuoka hobby show in May.

Interviewer: Truly, you get the feeling that this opportunity to revive Yamato isn’t just limited to the people officially involved in the anime and the model kits, but is more “spread out” to involve the fans as well.

There are two more parts to this plamodel developer interview. It will proceed by cutting more deeply into the 2199 plamodel series! “Relationship with the mecha collection,” and “the trials and new technology imposed on every new product.” All hands, prepare for viewing!