Presented here is the second of two articles (read the first one here) published in the February 2013 issue of Otoko 40 Nen Otoko [1965 Man], a rare interview with writer/director Eiichi Yamamoto that explores the creation of characters that influenced a generation.

Eiichi Yamamoto interview: How the Soldiers of Yamato were born 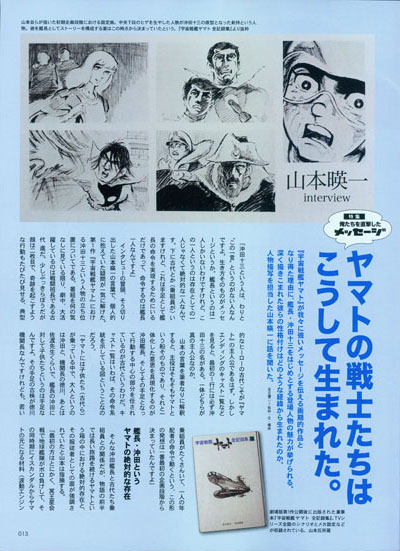 The reason Space Battleship Yamato became a groundbreaking work that handed down a strong message to us was the charm of its characters, including Captain Juuzo Okita. What were the circumstances that lead to the deep depiction of these characters? We ask Eiichi Yamamoto, who took charge of their portrayal.

Born 1940 in Kyoto. In 1961 he became a founding member of Tezuka Productions (later Mushi Pro). His first work as a director was Tales of the Street Corner (1962), and he was also involved in Mighty Atom [Astro Boy] and Jungle Emperor [Kimba the White Lion]. In addition to participating in Space Battleship Yamato from the planning stage, he helped create characters and write scripts, and also designed the Yamato logo.

“The man Juuzo Okita is comparatively not one you can sum up in a single word. Is his way of life itself a message? Although the captain of a ship is one man, he’s not just one person, but has the existence of one absolute person. From Kodai downward, the crew are only there to realize the commands of the captain as his hands and feet, and the orders come from one captain.”

Those were the words of Eiichi Yamamoto that started the interview, which instantly solved a personal question of mine. It was about the standing and position of Juuzo Okita in the first Space Battleship Yamato. If you watch the program casually, in the story Susumu Kodai plays a large part as the combat group leader. His face is handsome if a bit blunt, and his actions are often miraculous, so it would seem that Kodai is the typical hero character of Yamato. But if you look at the cast list in the end credits, the name of Juuzo Okita is there on the first line without fail. Which is the real hero?

When I interpret the words of Yamamoto as a writer, the lead role goes to the ship itself called Yamato, with the intention that it is embodied by Captain Okita who is unified with it. That means Kodai is entrusted with a central role that becomes the hands and feet. The cast list is a figure, so to speak, that shows the chain of command. 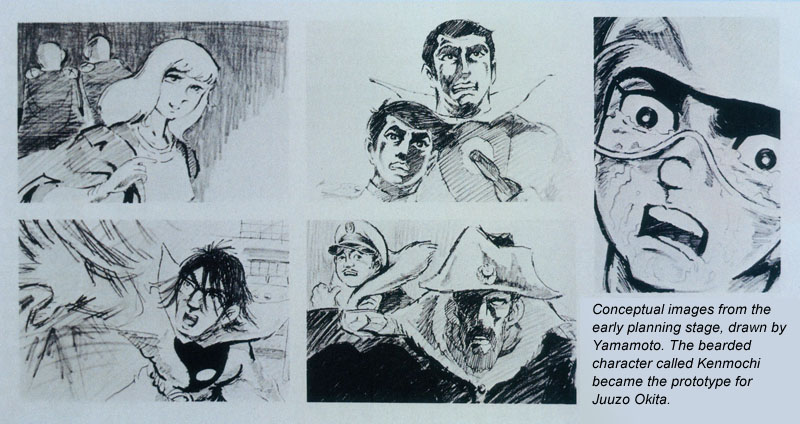 Captain Okita is called the absolute presence on Yamato

While there is a relationship between Captain Okita, Kodai, and the crew, Yamamoto points out that there is an absolute presence in the box called Yamato during first half of the journey, and that the aspect of obedience was emphasized.

“At first, the Earth fleet goes down in tattered defeat in the Pluto battle, and the material that becomes the origin of Yamato (the startup parts of the Wave-Motion Engine) is delivered by Sasha from Iscandar at the same time. Even if they must return in tatters, Okita says ‘there is no shame in losing.’ What is necessary is just to win in the end no matter how many losses you endure. He says severe things in various ways.” 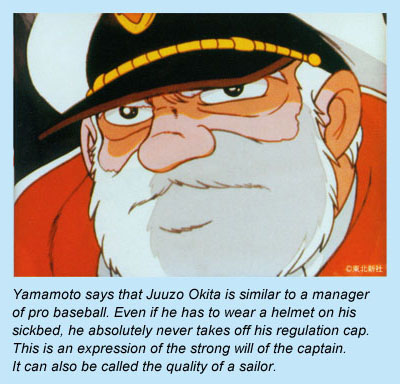 At the beginning, Okita watched Kodai’s older brother, his only blood relative, die in the battlefield (though it turned out later he was alive on Iscandar). Did the unyielding spirt of Okita go to Kodai, who saw him as an enemy? Or did he assume there was no choice but to follow Okita’s absolute orders?

When Okita turns to Kodai and says, “Have you forgotten your training??” and such, giving off such a strict vibe, you definitely get the sense of a military mood. As opposed to critiquing an ideology there, the creator’s intent was to convey something of the sense of the relationship between a master and servant which Japanese people may have forgotten about.

“While watching a pro baseball game, I thought that the one other kind of person with that absolute authority is a baseball manager.”

Yamamoto also talks that way in light of his own similar experience.

“At the time I directed Jungle Emperor, I was also that kind of singular person. Although there were many people around me, I was the one issuing instructions. Therefore, I had more of a sense of intimacy with the characters at that point. If you’re in the position of a supervisor rather than a middle manager, you must fight entirely amid loneliness. You can’t ever say that you don’t know what to do, or anything like that. Anyhow, Okita is a singular person who must go to the planet Iscandar where no one has ever been, and there is a limit of one year before he must return. Because they move forward knowing that everyone on Earth will perish if they don’t succeed, there must be terrible pressure.”

On the other hand, as the story goes on and the character portrayal deepens, the master/slave relationship develops into a teacher/student or parent/child relationship.

Yamato soon leaves the solar system, and Okita lies in the captain’s room with the worsening space radiation sickness his body previously contracted. After Kodai begins to show an ability for greater judgment, Okita appoints him as the deputy captain. 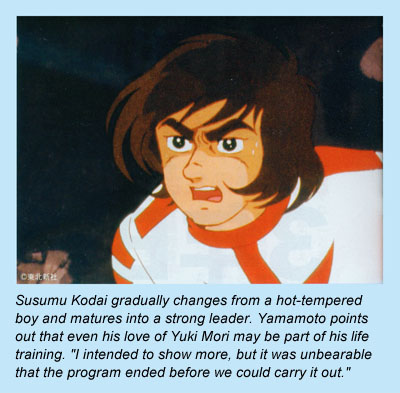 “Around the middle of the story (including the script) we started to change hands and started showing a slightly different aspect. While focusing on Kodai and Yuki, Analyzer got entangled and at one point he pressed Yuki for marriage. At the time the staff could work comparatively freely, and I think their personality came out well.”

Which characters did Yamamoto feel had the most charm?

“It was Kodai, after all. I didn’t know what kind of person he was when he first appeared. As I looked through the script of Episode 1, I said, ‘this aspect’s wrong, isn’t it? Fix it.’ Then there came the time when we could depict Kodai’s past a little. At the time of the last communication with Earth, Kodai is the only one who doesn’t have any family, and he sits silently in front of a screen full of static. In this episode, we illustrated why that is, and at that point we completed the construction of this character named Susumu Kodai.

The circumstances of Kodai having no family on Earth exactly matched those of Okita. With grief in his heart over the loss of his family to the Gamilas attack, Kodai fights the enemy with an open desire for revenge. However, at the end of the battle on Planet Gamilas, when he at last sees the ruins of the Gamilas city that appear as the price of victory, he asks, “doesn’t the one who lost have a right to happiness?” with his own lips.

“The protagonist annihilates the enemy and reflects upon it there for the first time. I don’t think a scene with such a characteristic had ever appeared in anime before Yamato.”

The meaning of peace could be called the core message that the creators wanted to convey through the growth of Kodai. 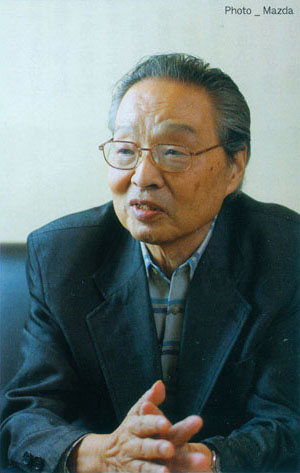 The soul of Yamato is passed on from Okita to Kodai

Considering the relationship between Okita and Kodai, Yamamoto describes it this way:

“I think Okita has the role of a storyteller. Although Kodai really has the leading role, there is the absolute relationship that Okita is the captain and gives the orders. But there aren’t many lines which spell that out. Though when Okita calls Kodai to his bedside and entrusts him with everything, I think the language hits it at that time. ‘Do it in your own way’ is what he says. In other words, you could say that Okita himself transfers into Kodai. In the second movie, Okita is enshrined as a god on Hero’s Hill, and it is assumed Kodai will go on substantially as the captain. Although he fails at first, he will become like Okita someday.”

The soul of Yamato is passed on from Okita to Kodai. Yamamoto points out that the last scene may have implied this.

“Although Okita dies with Earth in front of him, a little earlier there’s a scene where he asks Dr. Sado, ‘where will my soul go after I die?’ and it’s the kind of exchange that says ‘I may enter into someone.’ The intention was that he finally entered into Kodai, but what actually transpired (in the midst of the Gamilas counterattack) was that Yuki died, and as soon as Okita dies, she recovers. So one way of looking at it is that Okita’s soul went into Yuki. In the end, that was left unresolved.”

Although there is no way to know the true circumstances, Okita says a wise remark when he sees the red Earth in his last moments.

“He says, ‘Earth, how bittersweet.’ I think the word he used has the feeling of counting both good and evil together. Although the enemy invasion lead to the tragedy of Okita, like Kodai, losing his family and his only son, seeing the Earth as bittersweet includes all such things. Besides, he thinks of the future and the future of this planet, and he could look warmly upon it. So the words in this line are an affirmation of Okita himself.”

Because the original episode count was reduced, Yamamoto regrets that he was not able to depict the psychology of Kodai in relation to Okita. However, the figure of Okita in eternal sleep with a sense of satisfaction at the accomplishment of a great voyage relates to the eternal question of human beings, whether or not a human life disappears along with the body. In the meaning depicted through anime, I think again now that it was a significant experience for us. 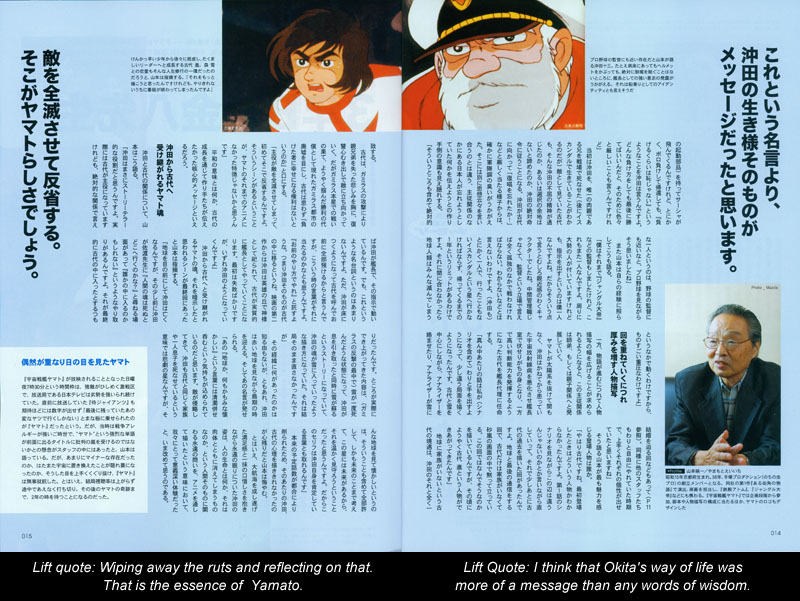 By chance, Yamato saw the light of day

It was decided that Space Battleship Yamato would be broadcast in the timeslot of Sunday night at 7:30, which brought it into a fierce battleground on Japanese TV and forced it into an inferior position. Not even Samurai Giants, its lead-in program, could be expected to put up those numbers, and it was said that Yamato was placed on the chopping block as if “there was no choice but to sacrifice that oddball at the end.”

The anti-war sentiment was strong in those days, and Yamamoto said the staff was concerned that the word Yamato in the title might catch a storm of criticism. But whether it was too minor a player or the name was disguised by the word “space,” Yamato slipped past such eyes and flew safely. Nevertheless, it was tragically discontinued along the way when the ratings did not rise. It took another two-year wait for the subsequent miracle of Yamato.