When the series made the jump from theaters to TV in April 2013, it would be accompanied by a whole new set of songs. The first news of this came on February 9 when it was announced that several members of JAM Project would come together under the name “Yamato All Stars” for a special rendition of the opening theme for TV. This “dream team” would consist of Isao Sasaki, Hironobu Kageyama, Shoko Nakagawa, and others. Proceeds from CD sales would benefit 3/11 earthquake relief. 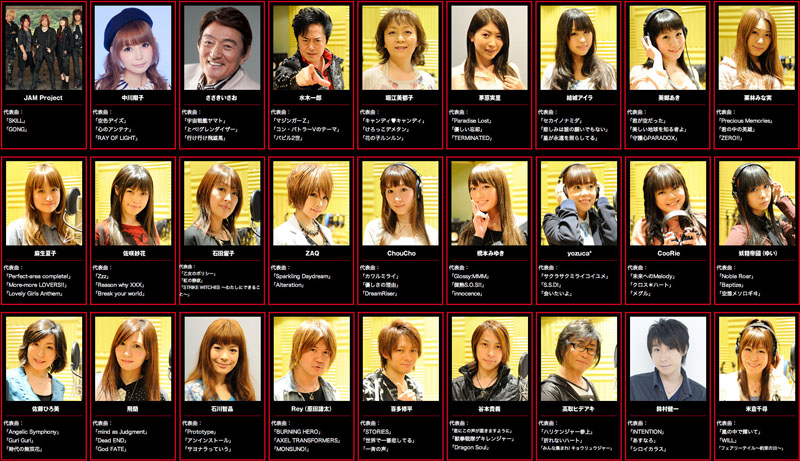 The name Yamato All-Stars was changed to Project Yamato 2199 on March 15 when other A-list performers joined the fold: Ichiro “Aniking” Mizuki and Mitsuko Horie have been belting out anime theme songs for decades both live and in the studio. Horie (top row, fifth photo) brings her own Yamato cred to the table, having previously performed songs for Be Forever and Yamato III.

Additional singers were announced at a rate of one per day over three weeks, which included several voice actors from the series. The rollout halted just before the April 7 TV broadcast, and it was announced that the last four “surprise names” would be listed in the end credits. This was by far the largest number of vocalists ever assembled to render the theme.

See the Project Yamato 2199 page on the official website here.

See the full roster on Anime News Network (with links to their other credits) here. 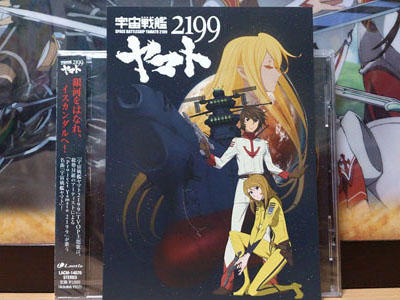 Topping out as a 30-member chorus, Project Yamato 2199 delivered a knockout punch when their rendition of the Yamato theme was first heard on TV as the opening title of Episode 2. (Episode 1 opened without a song.) The disc contains four versions; full chorus, male only, female only, and instrumental. A long list of music stores in Japan participated in a giveaway program in which postcards were handed out with each CD purchase until supplies ran out. 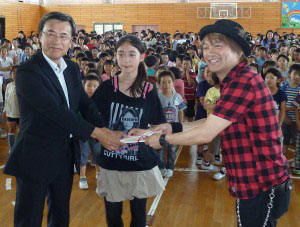 Project Yamato 2199 later made good on their promise to donate proceeds to charities related to earthquake relief in Japan. One result of that effort came to fruition on June 14 and entered the news stream on July 8: copies of the CD had been sold through the SLA (School Library Association), and 1 million yen (about $10,000) had been raised to purchase books for children’s libraries in three prefectures.

Singer Hironobu Kageyama (pictured here) visited an elementary school in Fukushima on June 14 to hand over the inventory list in a special ceremony.

On July 10, 2013, a surprising announcement emerged from 2199 headquarters: for the first time ever, a Yamato TV episode would begin with a different opening theme song. As of Episode 16, the opening theme of Yamato 2199 would be a song titled Fight for Liberty by the A-list hard-rock band Uverworld. The band members were quoted as saying they worked hard to write a song worthy of Yamato.

Japan’s Excite website (similar in scope to Yahoo) published an interview with two band members on the day of release, vocalist Takuya Infinity (of course…) and drummer Shintaro. Mr. Infinity said that the lyrics for Fight for Liberty did not come easily, and he was striving for a worldview that would not disappoint Yamato fans. (Naturally, this will be tough for foreign fans to evaluate until those lyrics get translated.) His first thought was to try something more traditional, but since Uverworld was chosen for this job by the anime staff, he decided to stay “in character.”

The theme is essentially a fight song, but he pointed out that it wasn’t meant to encourage violence, instead taking the broader view of a fight against everyday challenges and internal conflicts. Shintaro took that moment to comment on the importance of harmony with his neighbors, which would be of particular concern for a drummer.

Takuya also said that, despite their difficulty, the numerous structural changes in the song were chosen to freshen up the standard 8-beat approach, and all the band members contributed to the complex composition. Despite the cacophony that resulted, the feeling was that no one in the band had taken a leading role and they felt that the balance of effort helped them to mature as a group.

At one point, he put on a DVD of the anime and muted the sound so he could play Fight for Liberty over it, and he was happy with how they lined up. This opinion was not widespread, however. By the time this disc rolled out, it had already earned the dubious title of most controversial Yamato song in history.

When it first appeared with Episode 16 on July 21, longtime fans found it a tough pill to swallow. If the comments on Amazon.co.jp were a reliable barometer, it was reviled for being completely inappropriate. Oddly, the original opening came back for Episode 19, but was replaced again on Episode 20. Reactions were almost certainly mixed in the Yamato community, but fans of Uverworld ate it right up.

This was the first 2199-related CD to be released in two formats. The standard disc (AICL 2536) shown above left contains the song with and without vocals, plus two unrelated tracks. The deluxe version (AICL 2534~5, shown higher up) contains the CD and a region 2 DVD with a music video of Love Words. It features only the performer with no Yamato footage.

Fans who ordered the disc from the Yamato Crew website received bonus postcards showing images from the end title scroll.

Visit Mika Nakashima’s home page here. The music video for Love Words is not available online, but you can see a fan perform a karaoke version of the song (really well!) here.

Best of My Love

American-born pop star Rei Yasuda performed the second end title song for the 2199 TV broadcast, Best of My Love. The single contains two non-Yamato songs, and was the second from 2199 to be released in two versions. The song accompanied Episodes 9-17.

See the short version of the Best of My Love music video here.

This was the third and last end title from the TV series performed by Jazz singer Juju. The disc contained vocal and instrumental versions of the song, plus two non-Yamato tracks. Distance was the end title song for Episodes 19-26. 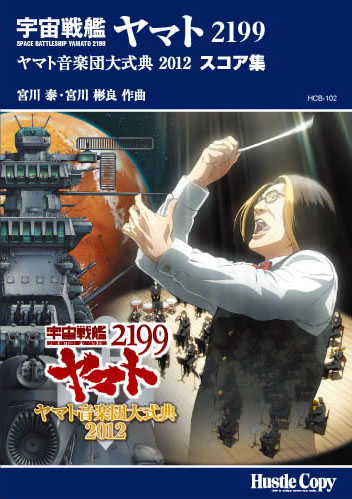 The wait for this live performance on CD–the first Yamato concert to be commercially released since 1980–finally ended four months after its November performance. “Classic” Yamato scores open the show with a four-part suite arranged by Akira Miyagawa (based on his father’s compositions) first published in 2002, which became a staple of his concerts with the Osaka symphony for the next ten years. Several recomposed pieces for 2199 follow, interspersed with live commentary by Miyagawa about the origins of Yamato music. Regrettably, of the seven songs that comprised the second half of the concert, only two made it to the disc, one of which is a cover of the seldom-heard Love Supreme from Final Yamato. The vocalist, Yucca, was previously heard as the female soprano on the live-action Yamato movie soundtrack. We can only hope the missing songs will be released in the future.

On the same day as the CD release, the complete score for all the orchestral tracks was published by a company named Hustle Copy (at right). So far, it only appears to be available from their own website here.

Akira Miyagawa conducted the 109th concert of the Osaka City Orchestra on October 28, 2014 in a program that combined Yamato music with other pieces (see more info in Report 37 here), and on March 4 we were lucky enough to get that concert on CD. The 75-minute disc contains four non-Yamato pieces (two by Miyagawa and two others including Leonard Bernstein’s suite from On the Waterfront) and about 34 minutes of score from the original Symphonic Suite Yamato and Yamato 2199. Most can be found on the 2012 concert CD, but the arrangements are slightly different here.

Concert 2015 took place February 28 and March 1 (see two different reports at those links), bringing the Yamato 2199 music experience to a close in the most magnificent way possible. As of this day, the whole world could share some of the thrill that the live audience experienced. The entire 94-minute performance is contained on two discs with minimal narration by the voice actress for Yuki Mori. Disc 1 is a musical look back at the original story, and disc 2 brings us the first live performance of all the new pieces from Ark of the Stars. 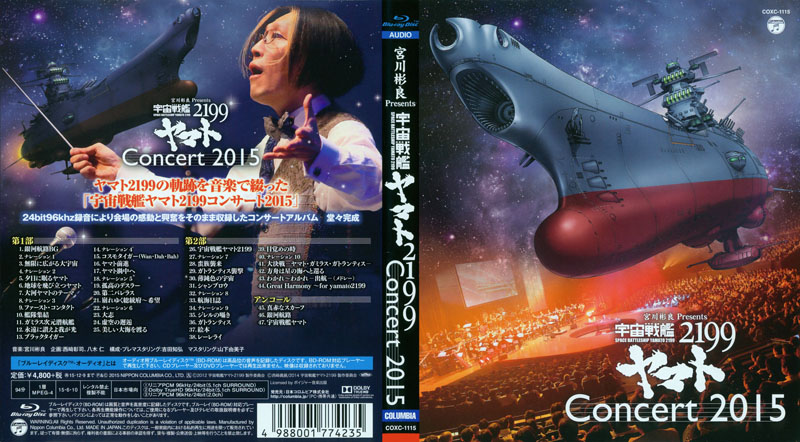 Continue to the next part: Movie Music