The 6-month countdown to Final Yamato‘s premiere began in September ’82, and the four major anime magazines (sporting October cover dates) each did their part to make the wait a little easier.

There was no new theatrical anime this month, but a Godmars feature film was due in December and Crusher Joe, Harmagedon, and the first Urusei Yatsura movie Only You would arrive prior to Final Yamato. Thus, all of those titles got priority treatment in these issues.

The picture on TV was similar; no new series debuted in September, but SF anime such as Dougram, Xabungle, Baxinger, and Dairugger XV (later to become part of Voltron) were still rolling along and the triple-threat arrival of Macross, Space Cobra, and Endless Road SSX was only a month away. 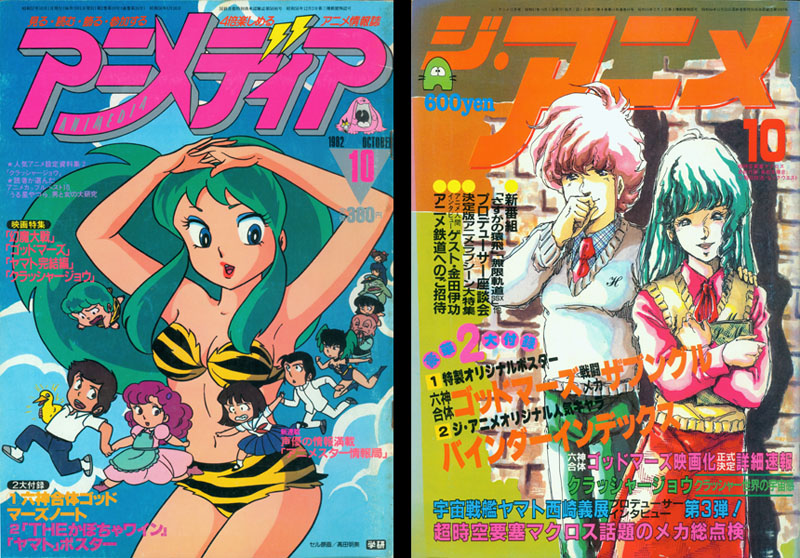 Urusei Yatsura opened the issue with a cover story, followed by one on Crusher Joe showing finished cel work; it would come out one week before Final Yamato, but its production was much farther along at this time. Harmagedon, Godmars, and the upcoming October TV shows received a nod, and French fantasy artist Moebius was interviewed about his design work on the recent CG film Tron.

The Final Yamato article ran 6 pages that combined a Yoshinobu Nishizaki interview with a look back at Series 1, Episode 1 to highlight the character moments that the new film would draw from. Meanwhile, Kodai and Yuki took first place in a reader poll to choose “best anime couple.”

The Anime scored an unassailable victory when it became the first anime magazine to publish a Macross cover, connected to a 5-page article that profiled the groundbreaking mecha for the first time. Coverage of all the upcoming feature films was at the front of the issue, sweetened by free insert pages with film images, made for school binders. Tron character design, the summer premiere of Leiji Matsumoto’s My Youth in Arcadia, and a retrospective on trains in SF anime were just a few standouts in an issue chock-full of eclectica.

Final Yamato got a handsomely-designed 6-page article in which Yoshinobu Nishizaki talked about the character beats of the story and the responsibility of meeting expectations that had built up over nearly ten years. 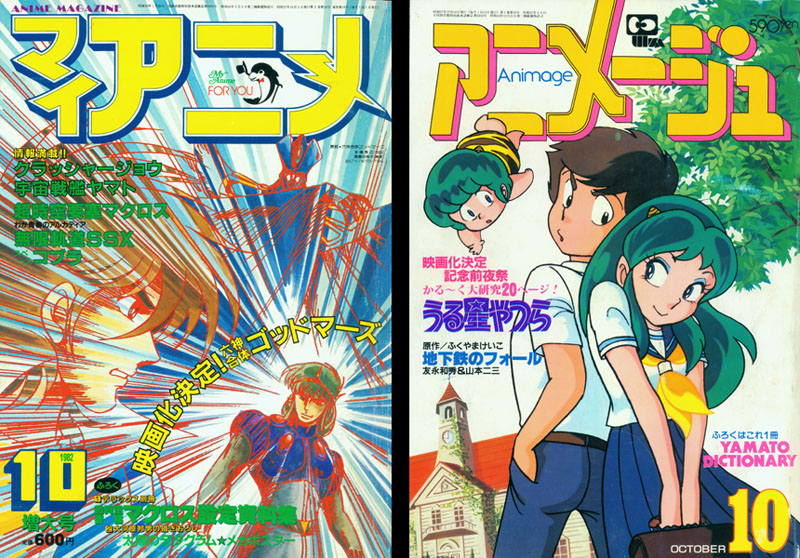 A dynamic Godmars cover lead the way into feature film coverage, followed by profiles of the upcoming Macross, Cobra, and SSX. Currently-running TV anime (Xabungle, Dougram, Acrobunch, Minky Momo) got its due, and random articles on actors, artists, manga, movies, and other essential topics filled the rest of the issue.

A 5-page Final Yamato article gave everyone a close look at the Queen of Aquarius and expounded on the newly-revealed fact that the film was being prepared as Japan’s first-ever 70mm anime. This was followed by an expansive collection of comments from the now fully-engaged production staff, including some never heard from before (or since). 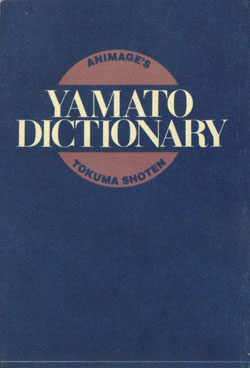 Urusei Yatsura dominated this issue with a 20-page cover story, followed by Godmars, Crusher Joe, and Final Yamato. TV coverage ticked all the same boxes as the other magazines, in some cases using the same images – the Macross mecha, for example – and the other pages were packed full of all the usual stuff, including the 9th manga chapter of Hayao Miyazaki’s Nausicaa.

The 5-page Final Yamato article had a couple exclusives: a detailed synopsis of the film’s entire first act (ending with Yamato‘s return to Earth), and the official announcement that the story would be set in the year 2203. Yoshinobu Nishizaki even went on record with his explanation for this.

But what elevated Animage above its competition this month was the Yamato Dictionary, a 164-page paperback that is exactly what it sounds like. The first third was a section of color stills focusing on characters and stories, and the balance was filled with black & white pages that alphabetically explored the entire saga up to and including Yamato III.

Read the article and excerpts from the dictionary here.

Continue to October 1982: the premiere gets a month closer, mecha and scenic design takes center stage, Nishizaki continues to elucidate, and…Yamato on ice? (Plus, the twin debut of Macross and SSX enlivens SF TV anime like never before.)