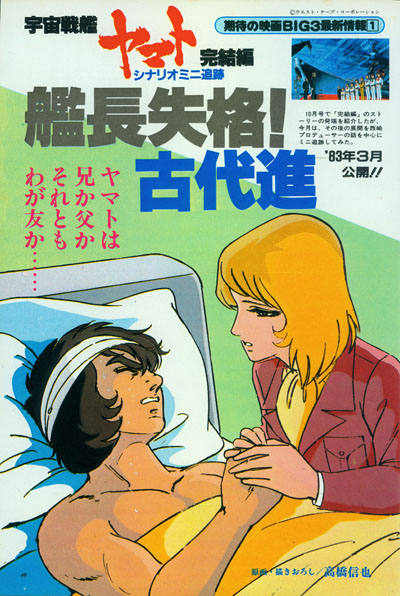 The beginning of the story of The Final Chapter was introduced in the October issue, but this month the main thing is a mini pursuit of what happens next by talking with Producer Nishizaki.

Is Yamato my older brother, my father, or is it my friend…? 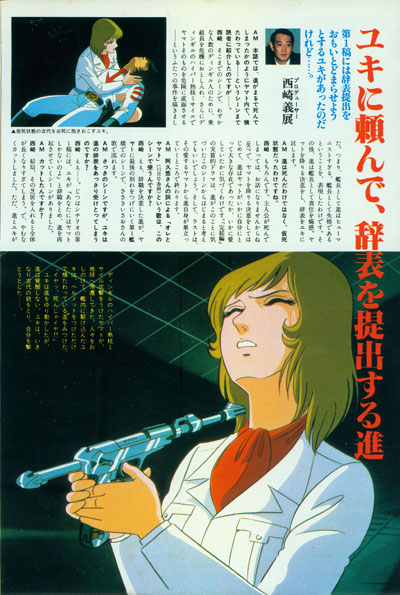 Yamato is attacked by Dengil hyper-radiation missiles and
returns to Earth. Yuki pushes people aside and runs into the
ship. She finds Susumu lying near his helmet. “No, not dead!!”
Yuki shakes Susumu, but he doesn’t wake up. Yuki suddenly
grabs his gun and tries to shoot herself.

Yuki is asked to submit Susumu’s letter of resignation 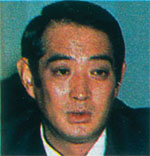 Animage: In this issue, it looks like Susumu dies on Yamato, but it’s not true. Please introduce readers to the scene…

Nishizaki: Two incidents are depicted; the crew plunges into a crisis in one scene for the sake of a few Dengil people, and Yamato itself faces the danger of Dengil’s hyper-radiation missiles. In other words, as a captain Susumu is too much of a humanist, and expressing it disqualifies him as a commanding officer. Afterward, he keenly realizes his responsibility as the captain of a ship. He makes up his mind to leave Yamato and entrusts his resignation to Yuki.

Animage: Susumu isn’t dead, but goes into a state of suspended animation.

Nishizaki: Of course. If the hero was going to die, I wouldn’t talk about it. (Laughs) So the first time he decides to leave Yamato, Susumu realizes what a major presence Yamato is for him, and notices how much he loved it. You might consider this the scene from which the real drama of Final Yamato progresses. It ends when Susumu voluntarily leaves his beloved Yamato.

Animage: Is the song Me and Yamato with lyrics by Yu Aku (see the November issue) used in this scene?

Nishizaki: Yes, when Susumu decides to resign he says his last goodbye to Yamato on the first bridge, and it flows with Isao Sasaki’s song.

Animage: In a previous scene, does Yuki receive Susumu’s letter of resignation?

Nishizaki: Yes…actually, in the first draft of the script, there was a scene where Yuki said, “You only have Yamato” and stopped him from resigning, which gave him a restart.

Animage: Was it cut?

Nishizaki: In the end, if everything was left in it would be too long. I cut it reluctantly. However, I prepared another scene to foreshadow the decision for Kodai and Yuki to live together as a couple. It’s in the second half, but they both get on the Cosmo Zero in a battle scene against the fleet of Lugal Jr.

Animage: Susumu recovers because of Yuki’s words – that’s what the audience wants to see.

Nishizaki: I wanted to put that in too, but it couldn’t be helped. 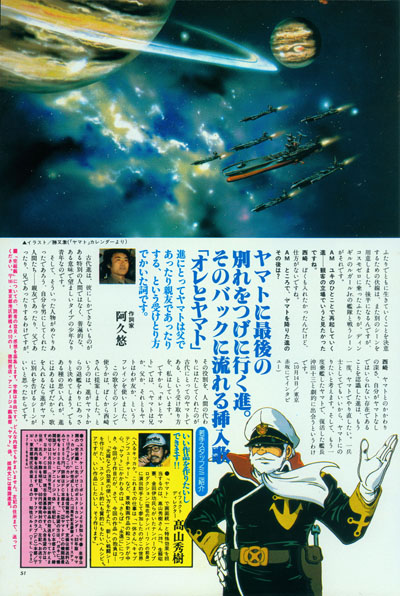 Nishizaki: He recognizes his deep relationship with Yamato, and that he can’t do without it, so he wants to start over with Yamato once again. Even being just a simple soldier would be good, and he wants to return to Yamato. And when he boards the ship again, he meets captain Juuzo Okita, who has been miraculously revived.

Susumu says his last goodbye to Yamato. The insert song Me and Yamato flows in the background

For Susumu, Yamato is a father and a friend, that’s how it is expressed in the lyrics.

Susumu Kodai is not a special human being with something that only he can do, he’s a young man who is a desirable type in a universal sense. And so, these sorts of people he would encounter, the people who would make him the man he is – as a friend, as a father, as a brother, that role for Kodai ends up being taken by Yamato in place of a person. That’s what I was trying to have the listener take away from this.

Therefore, in Me and Yamato, I used the refrain, is Yamato my older brother, my father, or is Yamato my friend? I proposed a scene to Mr. Nishizaki that would use this song. Susumu unceremoniously decides to withdraw from Yamato. But because there should be a certain amount of contemplation in him, I thought it would be good to add a song to the scene in which he says goodbye to Yamato. 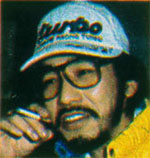 I want to create a good work!!

Hideki Takayama (28) is in charge of special effects and on-screen integration in Yamato. He got his start as an assistant director for Akinori Orai and Yoshinori Kanada at Number One Productions (the forerunner of the current Number One). His previous work includes Captain Future, centering on storyboarding for Toei Animation. He was involved in both Farewell to Yamato and Be Forever, and he has great ambitions for this third film.

“I want to make new battle scenes that change the use of effects for things like laser beams. The quality and schedule are intense, but I want to create a good work.” 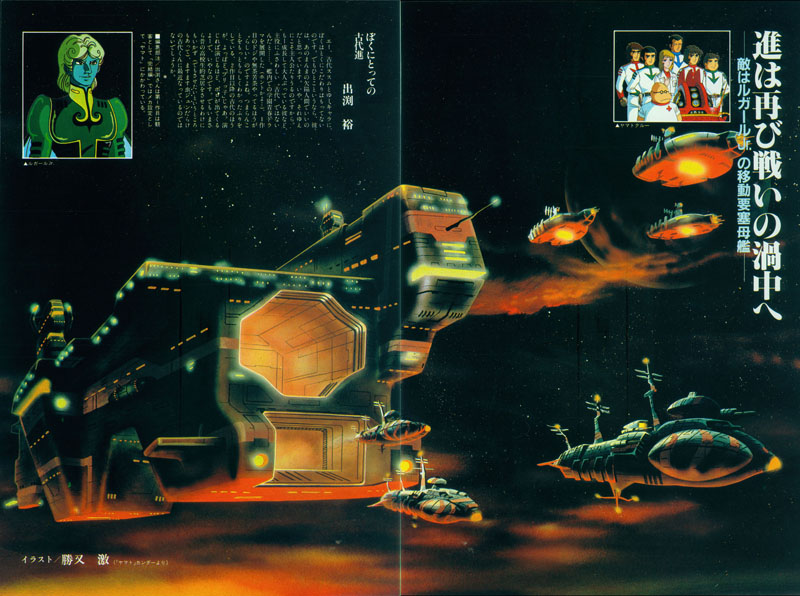 Susumu is again drawn into the vortex of battle

The enemy is the mobile fortress mothership of Lugal Jr.

Susumu Kodai for me

Eh, I don’t have any particular feelings about Susumu Kodai or other characters. But if you were to describe him in a word, I think he is good as a flawed human being. No, I think it’s because of that you can buy him as a main character. He has grown and developed, but “Kodai” is not worthy of the leading role. As this campus youth drama unfolded aboard the ship (seriously…), the clumsy, reckless version of him from the first series is very “like” him. The Kodai from the second series is very much a goody-goody. The more you play that, the more seams start to show in the character, which I don’t like. However, at this point, you can’t play this like an old-style high school drama (much as there’s a part of me that would like to), and perhaps that’s how he’s gradually developed into a flawed Kodai-kun lately.

Editor’s note: The Final Chapter is Mr. Izubuchi’s first feature film, and he is involved with Yamato as a mecha designer.