Mentions of “Space Battleship Yamato‘s 10 Years” began with the publicity campaign for Final Yamato in the summer of 1982. In truth, this was somewhat of an exaggeration, since the first TV series went on the air in fall 1974. Instead, the ten-year mark was more of an internal one; the initial round of story development (described here) started in the spring of 1973 and Final Yamato would premiere in spring 1983.

Nevertheless, Yamato had certainly earned bragging rights for all it had accomplished since 1974, so the math wasn’t examined too closely when talk of the “Yamato Decade” went into high gear. One result of that was a 24-page booklet that came bound in the December ’82 issue of My Anime magazine. Though editorial credits are elusive, it seems to be largely the work of Ms. Misao Minamida, a loyal fan from day one who published her own Yamato doujinshi prior to taking on this assignment. 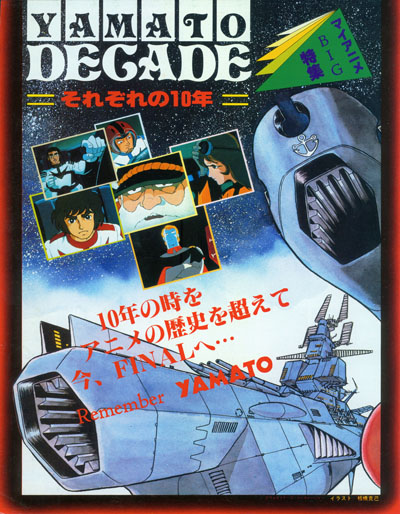 Through a variety of interviews and essays, the purpose of this piece was to examine how far Yamato had come both conceptually and commercially, and how far anime fans had progressed in their self-stated goal of elevating anime to mainstream acceptance. The depth and detail here are fairly unprecedented, which makes this a valuable time capsule.

Due to the length of this material, it has been broken into six parts. See the entire booklet on one page here.

Each of the 10 years

Beyond ten years of anime history,
to Final…Remember Yamato

Space Battleship Yamato has created its own era in both name and reality. The “older brothers and sisters” who were college students at the time Part 1 was broadcast have now come to be “fathers and mothers” alike. The “Yamato Generation” has broken through a wall called the first generation decade, and will certainly expand when new Yamato fans see it for the first time next spring.

A “Decade” – ten years. A lot of things come and go in that time. Through this big feature, we want you to look back at each of the ten years as the foundation of the first new step!!

In the first corner, let’s zoom up to the “transformation” in the story of Yamato!! 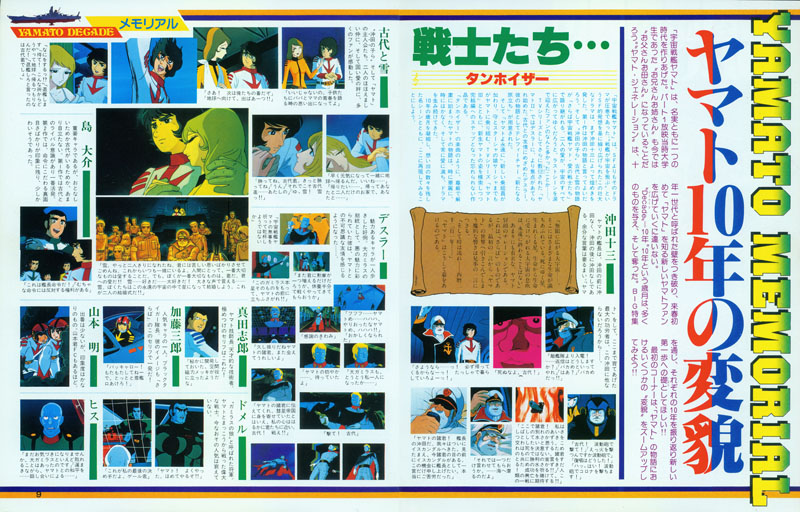 In Space Battleship Yamato, the best part came from SF and from the drama. This magnificent drama unfolded based on the SF idea of a “battleship flying in space” and the first spark was triggered by Juuzo Okita. It can be said that the first part is Okita’s story. The story of “Okita’s children,” Kodai and Yuki, is handed down in Farewell to Yamato. Many fans were brought to tears in the last scene, when the love of two people spreads out into all of space…

In the TV series Yamato 2, more focus was given to Dessler. He awoke to a friendship with Kodai. The telefeature The New Voyage was prepared as his story.

And then, Be Forever Yamato. New crew was added, and even Sasha, the daughter of Mamoru and Starsha, got on board Yamato. The TV series Yamato III cannot be forgotten as a step toward The Final Chapter while exploring a new way of life for Yamato.

The story of Yamato began with solemn dignity, like the music of Tannhauser. The drama was sometimes brilliant, sometimes transformative, and always filled with love.

Text on the tan scroll:

“The infinity that is space overflows with abundant life. Some stars die while other stars are born. Life evolves into different forms. The breath of the universe spreads from life to life, continuing in an endless cycle.”

This is the famous opening narration of Yamato. Although this is the version heard in Farewell, its spirit draws one into the world of Yamato from the first word.

This is how the curtain opens on Yamato. 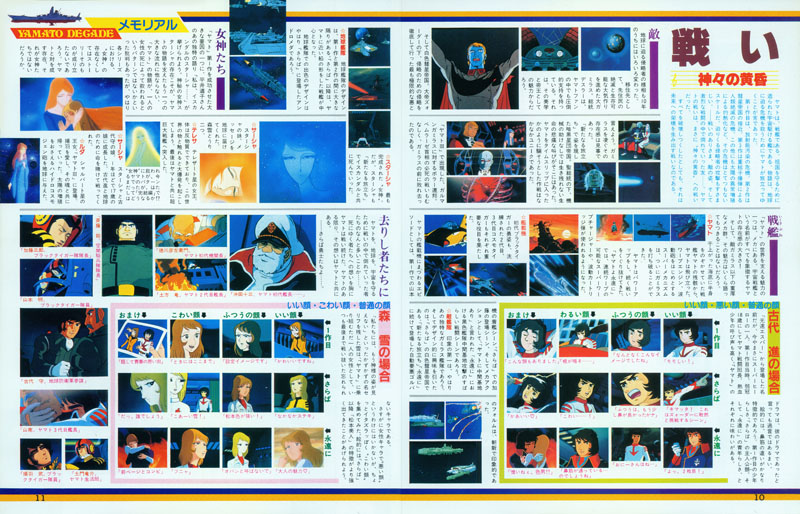 Yamato is a battleship. It is a ship built to fly through space in order to defend the homeland. The usual story is always that Yamato takes a journey to save Earth from a crisis.

In the first work, it was a crisis of radioactive contamination. The second was the approach of the Comet Empire. In the third, humanity was threatened by a hyperon bomb. Also, there was burning due to an abnormal solar increase; all crises of tremendous scale. The attack of approaching invaders is terrifying. Fierce battle, the figure of the enemy, and the loss of fallen friends. The battles of Yamato are akin to Gotterdammerung [Twilight of the Gods].

Even if everything is destroyed, it is a fight to create a bridge to the future. 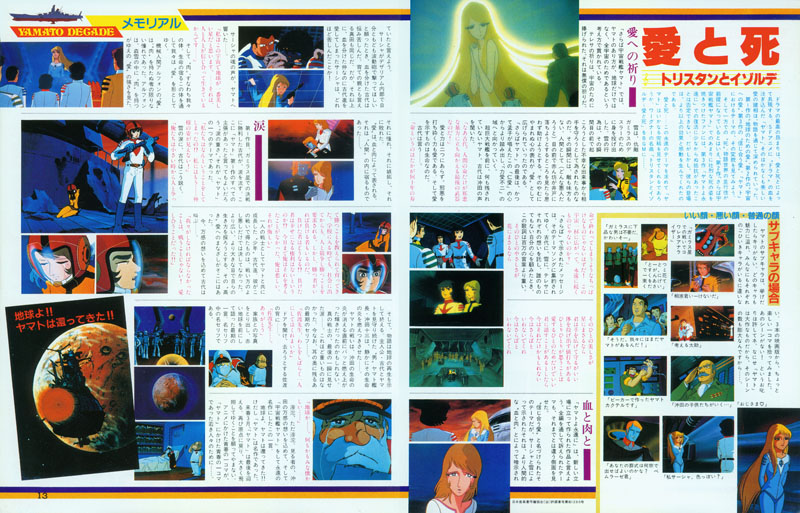 The height of drama is embodied by love and death. Yamato poured the blood of drama into SF anime. The diverse aspects of love’s fleeting beauty were deepened throughout the story.

In the first work, it was “love for Earth.” In the second, “love of space” and in the third, the “love of belief in each other.” Let’s look at the transformation of the theme in Yamato.

On the other hand, there is “death.” Although it is assumed that Farewell to Yamato is a parallel world story, fans were so taken with the heroic deaths in the second work that it created undeniable resistance to the third work, Be Forever Yamato. But its appearance produced the above-mentioned effect and gave an even deeper impression.

Love and Death…by exploring this eternal theme, what kind of conclusion does Yamato show? Tristan and Isolde ~ Love and Death, the famous Wagner masterpiece… 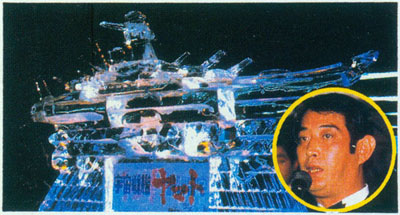 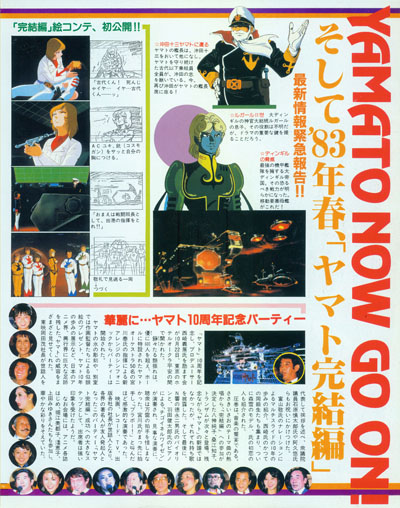 To commemorate Yamato‘s tenth anniversary, an event to encourage Producer Yoshinobu Nishizaki was held on
October 22 [1982] at the Hotel Okura in Tokyo.

The number of prominent people was over 600, and the party began with a new symphonic arrangement by Hiroshi
Miyagawa, who conducted the 50-piece Yamato orchestra in a
specially-built pit.

The dignified appearance of Yamato, which left a huge
footprint on the entertainment world, was demonstrated by an ice sculpture of Yamato, a portrait area with animation
directors in a separate room, and an exhibition of Yamato‘s ten years in the Japanese anime community.

Toei President Shigeru Okada gave a greeting on behalf of the organizers. Shintaro Ishihara of the House of Representatives and [lyricist] Yu Aku and others rushed to celebrate as well.

An introduction of these ten years was presented in a slide show narrated by Kei Tomiyama [Kodai’s voice actor], and Mr. Nishizaki’s former classmates appeared; his first love and the model for Yuki Mori was introduced at last. (See more information about her here.)

A musical banquet was the best part. After Isao Sasaki sang the theme song, Junko Yagami, Tomoko Kuwae, and Tranzam, all of whom are participating in The Final Chapter, appeared one by one. Unfortunately, there was no new Yamato music, but each performed a cherished song. Finally, Zigeunerweisen was played in a duet by violinist Tsugio Tokunaga of the NHK Symphony Orchestra and pianist Kentaro Haneda, a stunning performance for which the audience spared no thunderous applause. It was so impressive that Mr. Miyagawa shouted “bravo!” and was the first to applaud.

The presidents of movie, record, TV, and publishing companies were the organizers of the party, in which celebrities from various fields became friendly promoters. As a big step toward the success of The Final Chapter, it seemed all the attendees got a strong impression.

[Translator’s note: Mitsuko Horie is a renowned anime theme singer, having performed songs for Be Forever and Yamato III . Keiko Han provided the voice of Sasha, and Miyuki Ueda was the voice of Starsha, in addition to being the wife of Isao Sasaki.]

Continue to the next part: Staff Interviews