If it’s Yamato, there is Susumu Kodai. And with Kodai is Yuki, Okita, and Dessler. We hear from those who live in the world of Yamato! The rest of the crew is also united and active in the anime community, and a biographical sketch of this decade appears on page 22! 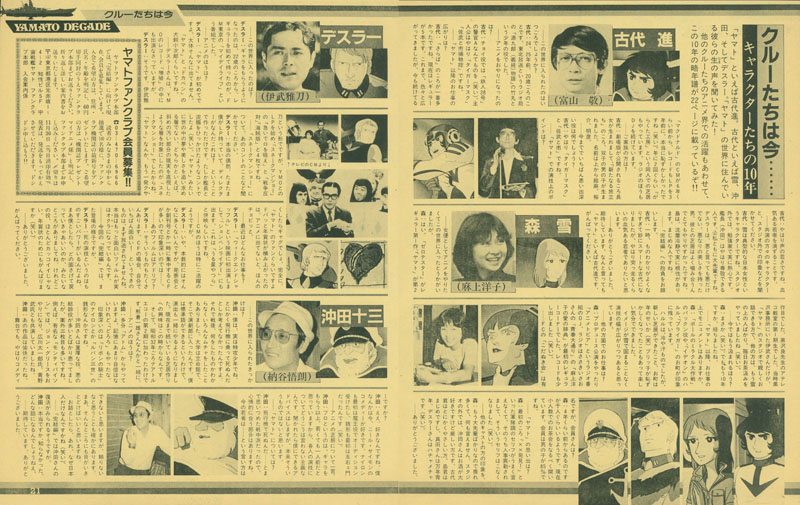 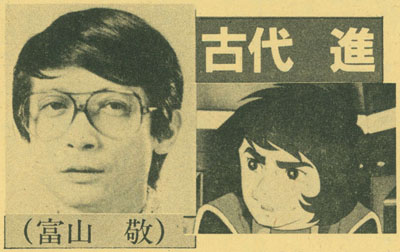 Interviewer: When did you break into this world?

Kodai: 24 or 25 years ago, when I was around 20 years old. It was the role of a boy named Takemaru in Genkuro Story for the radio station of Tohoku Broadcasting.

Interviewer: What did you do in anime?

Kodai: I had the part of Chiyoi in Tetsujin28 [Gigantor] and such things as police officers. (Laughs) I also did the heroes in Tiger Mask and Sabu & Ichi’s Arrest Note.

Interviewer: What was your work after Yamato?

Kodai: It was the most frequent at the time of Farewell. I’m a regular in five of them now. So far, there’s been a lot of variety. I’ve continued to do commercials for McDonald’s for around six years, and I did a really embarrassing LP three years ago. (Laughs) I do plays as a member of “Junk Studio” twice a year. I also continue as a radio DJ, too.

Kodai: My oldest daughter was born around the time the feature film came out, and my twin boys were born in the days of The New Voyage. From the top, their names are Ema, Yusuke, and Akihiko. 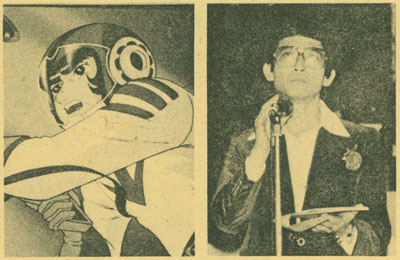 Interviewer: What was your most memorable role so far?

Kodai: It was Tiger Mask and Sabu & Ichi’s Arrest Note.

Interviewer: What is the point of your performance in Yamato?

Kodai: In the end, it is the voice of youth. It is to play a young man with vigor.

Interviewer: Please give us your impression of your co-stars outside the studio.

Kodai: Yuki’s character is of a traditional Japanese female. Outside the studio, she’s an enthusiastic hard worker. Captain Okita is a person I can respect. He’s a dignified man both in public and in private. Even if Dessler is called evil, he’s not just evil, he’s a man of beautiful evil. He’s very engaging, so it’s easy to work with him. Shima’s nature is very cool and composed. He’s a serious person.

Interviewer: What’s your ambition for The Final Chapter?

Kodai: It’s strange for someone as smart as Kodai to be temporarily unreasonable, but I still want him to race ahead as a vigorous youth.

Interviewer: Thank you very much. I’m looking forward to it. When we speak of Yamato, Susumu Kodai is there, so please do your best. 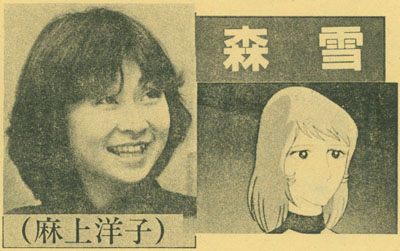 Interviewer: I heard that you entered this world as an actress because you wanted to do anime.

Yuki: Yes. Zero Tester was my first regular project, and Yamato was the second. I was in the first graduate afreco [voice after-recording] class of Mr. Ryo Kurosawa. Only Masato Ibu [Dessler] was in Mr. Kurosawa’s office at the time, so we can talk intimately in the Yamato studio like two people above the clouds. I served tea there every day. (Laughs)

Interviewer: How about serving some now?

Yuki: No way. (Laughs) But, has it really been ten years?

Interviewer: After Yamato, what is the monument of your work?

Yuki: The role of Pakkun in Paul’s Miracle Strategy Plan, Harulu in Great God Legend Ideon, and my work on Galaxy Cyclone Braiger all left an impression on me.

Harulu had me in a cold sweat, but I managed to do a new performance. Maybe that’s because I’m older. (Laughs) It was fun for a cutesy girl to be embarrassed. I think my performance range is expanding without getting locked into the image of Yuki. 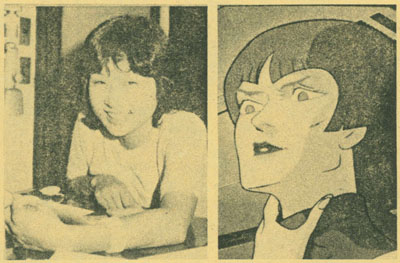 Interviewer: What is your work in other areas?

Interviewer: Your fan club Kodameki Society is famous; what is the membership?

Yuki: It’s been around for about four years and seems to be about 1,000 people. I have tea parties with a small number of people as often as possible. The membership is 85% boys.

Interviewer: What are your Yamato memories?

Yuki: I couldn’t say military lines like “XX detected!” very well in the early days, but after some staff changes were made, such lines stopped coming. (Laughs)

Interviewer: What are your impressions of the rest of the cast?

Yuki: Since they are all my seniors, I’m in awe of them and I can’t say anything. Outside the studio, Okita is a stern one, but he loves liquor. Kodai-san is a gentle person. Shima is serious, Sanada is a wise beyond his years, and Dessler is unruly. (Laughs) 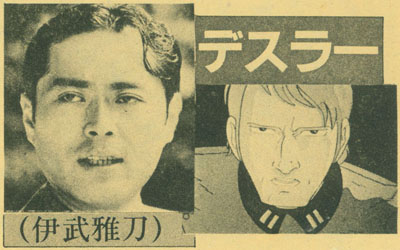 Interviewer: When did you join this world?

Dessler: I caught the bug when I was 22. My first regular role was on a program called My Day Life on FM Tokyo.

Dessler: Yamato was the first. There haven’t been many others. Yamato and Kojiro Inukai on Dokaben.

Interviewer: You also appear on the YMO record Expansion. [Translator’s note: Mr. Ibu was a member of a sketch comedy group called The Snakeman Show, which appeared on music albums from Yellow Magic Orchestra.]

Dessler: That’s right. I appear as Masato Ibu in The Snakeman Show on an LP from YMO in Quick Intake, Pacifism, Piracy, and four other pieces.

Interviewer: On the subject of The Snakeman Show, can you tell us about sketch comedy like that? 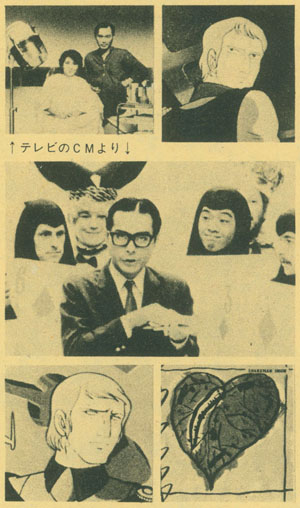 Dessler: It was truly accidental. It only happened to get made because I just happened to be holding an LP and the director asked, “What’s this?” Honestly, it’s like the sketch where the captain gets tricked into getting an enema. (Laughs) It wasn’t to pursue the beauty and dreams of the world like Yamato. If anything, looking messy reality in the face was the intention of The Snakeman Show. Yamato would totally be fodder for one more dirty gag.

The New Year’s cards from Yamato fans have piled up. Unless I appear in an anime, they lessen a bit.

Interviewer: What have you done recently?

Dessler: I appeared in a movie for the first time in Weekend Shuffle, and I’ll be in Shonben Rider. It seems it will be on a double bill with Urusei Yatsura. [Translator’s note: this refers to a live action film that would soon debut along with the Urusei Yatsura anime feature film Beautiful Dreamer.]

Dessler: No, there aren’t that many, but they create that impression since the focus of most commercial films is to concentrate the first ones.

Interviewer: Do you adlib in those films?

Dessler: There is a lot of that. It’s what most interests me about commercials! Mainly because that stuff never makes it to air. Honestly, way funnier film ends up on the cutting room floor.

Interviewer: You’ll be appearing again in The Final Chapter.

Dessler: A death performance requires great power. Well, in my case, I’m interested in seeing how they pull off my return. Still, this role is pretty cool, isn’t it? I do my best to earn the New Year’s cards. (Laughs)

Interviewer: Thank you very much. Please do your best.

Interviewer: What caused you to enter this world?

Okita: To tell the truth, I was a Kamikaze boy, but I didn’t believe that I would die on an airplane. So I didn’t know much sometimes about what to do with myself after World War II. Then I joined the drama club at Ritsumeikan University. I could speak standard Japanese, and came to be a director. My interest in staging plays has continued to the present time. I joined the second phase of Theater Echo around the year 1957, along with Kazuo Kumakura. 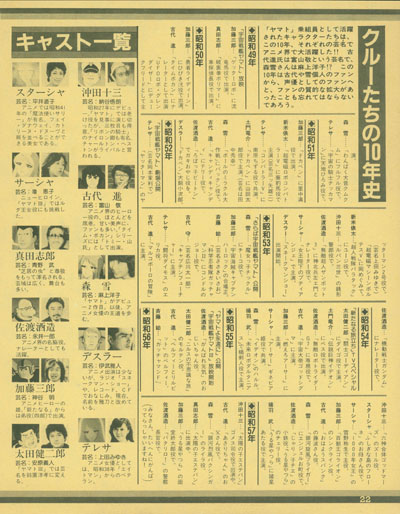 “History of the Crew”: other roles of Yamato‘s voice actors.

Okita: I probably started with Mighty Atom [Astroboy], but I don’t really remember. I also did Dororo.

The roles of Nylon in Princess Knight and Zenigata in Lupin III made a big impression on me.

Interviewer: Okita is a heavy role. I thought some actors only took big, serious leadership roles, but surprisingly they take on comedic ones, too. For example, you do John Cleese in Monty Python, co-starring with Taichiro Hirokawa [Mamoru Kodai] and Takeshi Aono [Sanada].

Okita: That was pleasant work.

Interviewer: Do you also do comedy on stage?

Okita: I think it’s an unspoken rule that, over and above simply being paid for the work, being a pro means being mature, even if you’re young, and what that brings to each individual performance. Although I enjoy giving advice when I’m asked, I don’t think of myself as a recruiter.

Interviewer: How about Yamato?

Okita: Because I am from the war generation and I brooded about dying in a plane, there is a part that suits me emotionally. While I don’t think you can talk this way, there are some who think that young people these days are unreliable. Well, I think you should be attentive to that viewpoint as well. Although, when you talk about it, I wonder why it’s only Japanese people who think that. (Laughs)

Interviewer: It seems Okita will be revived in The Final Chapter.

Okita: Really, I didn’t know that. I wonder what kind of story it will be.

Interviewer: I’m looking forward to it. Thank you very much.

Continue to the next part: Music Interviews