And now we reach the focal point of the month, which would have been a real endurance test for Yamato fans who could not miss any public event. The weekend of September 20 & 21 hosted no less than four Yamato-related events in different cities. Theoretically, careful timing would have allowed you to hit them all, a feat which would have earned you the title of Iron Fan. 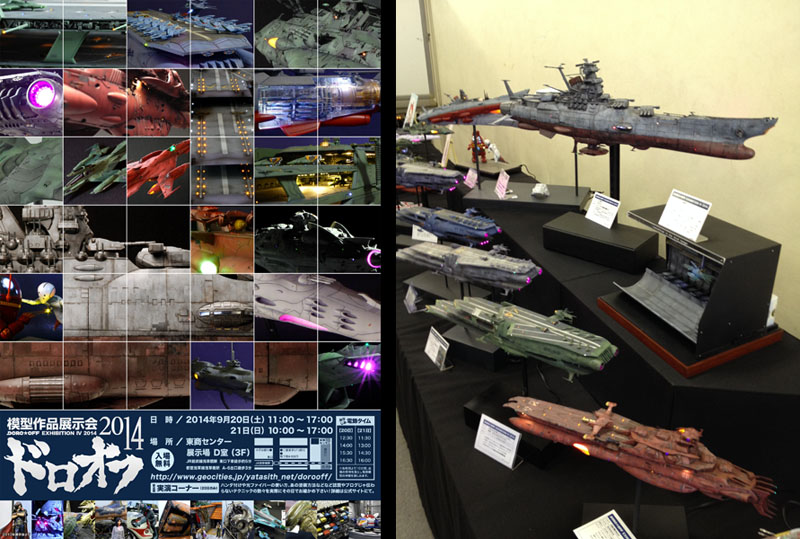 Held in the Taitou district of Tokyo, this annual hobby show is an exhibition (rather than a trade show) with accomplished modelers bringing their latest works together for mutual admiration. Naturally, Yamato kits were among them (and the event’s poster was certainly a tribute), but there was a lot more besides.

See a gallery of photos by friend-of-the-website Gwyn Campbell here. 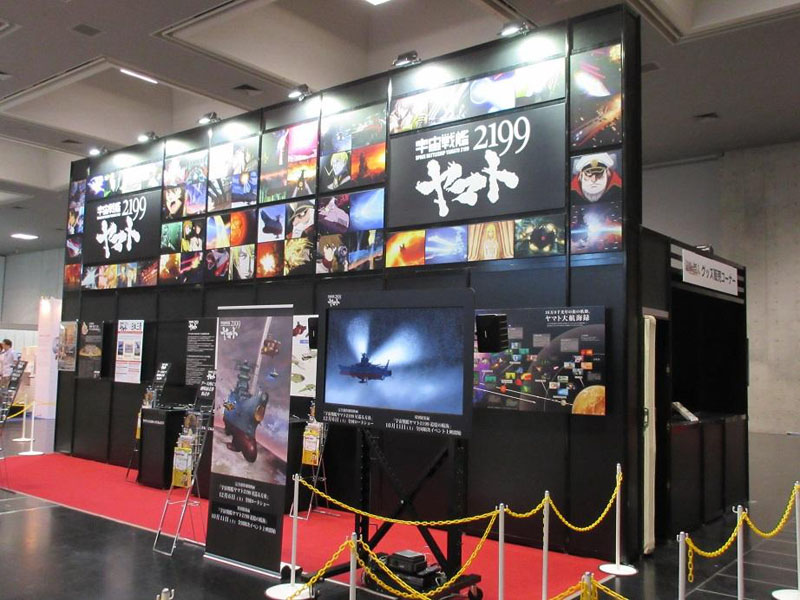 Yamato 2199 had a presence here for the third year running through a dedicated booth set up by Production IG. On display were the 1/100 Yamato and new mecha art from Ark of the Stars, and advance tickets to the films could be purchased. (Advance tickets are a major source of early production revenue, in case you’re wondering why there’s such a big push for them.) 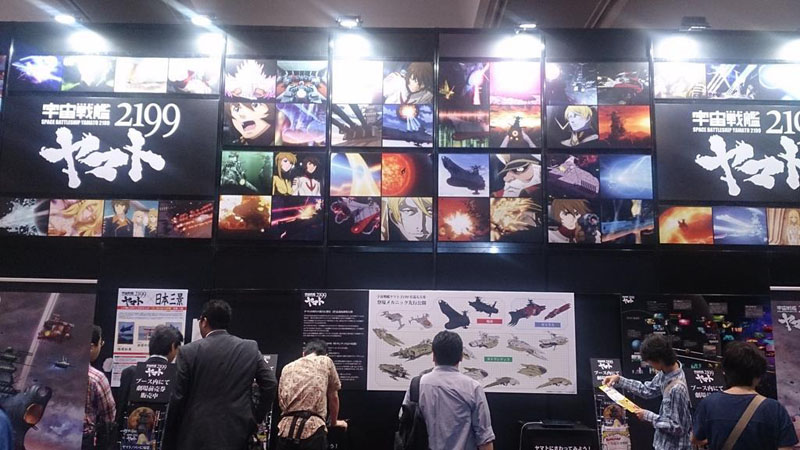 Attendees get an up-close look at the new mecha designs. (Photo found here.)

Here’s your own up-close look thanks to a Twitter user. Yes, that IS the Comet Empire’s “Magna-Flame Gun” ship at the left.

There were also two Yamatalk events on the Saturday schedule: one with Eriko Nakamura (the voice of Kiryu Mikage), and an intriguing seminar titled The Business Side View of Space Battleship Yamato 2199 by producer Mikio Gunji. His presentation gave rare insight into the gears of the anime industry. Read about it for yourself here.

An exclusive item sold by Animate: postcard art of Kodai and Yuki at the red gates at Kyoto’s Fushimi Inari Taisha shrine

See what else the event had to offer (including a full-scale Patlabor) via Youtube here. 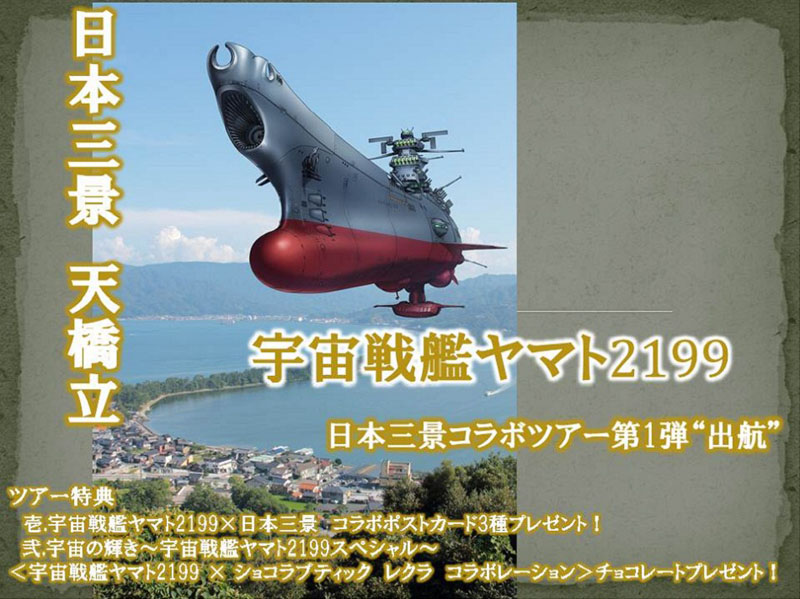 Kyoto is just a 30-minute train ride from Osaka, where the Art Exhibition was still open at the time. So between that, the Kyoto fair, and this tour, you could have filled up a Yamato weekend without even going to Tokyo.

As explained in Report 34, the Japan Tourist Bureau formed a collaboration with Yamato 2199 to conduct tours of the Japan Sankei (three most beautiful places). They used the proximity of the Kyoto fair to entice fans on the closest of the three, Amano Hashidate. 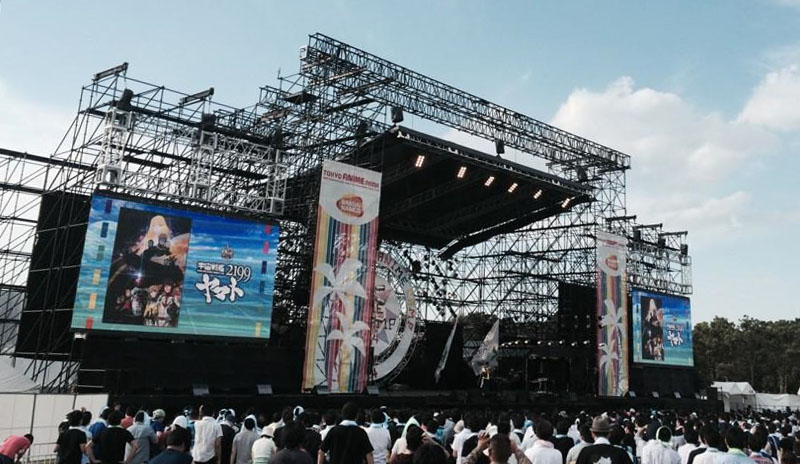 This one time…? At Anime Camp…? (Don’t groan, it was sitting RIGHT THERE.)

This was really a two-day concert rather than what you were hoping, but you have to give it up to any event with a name like that. Sea Breeze Park on Odaiba Island in Tokyo Bay was renamed “Tokyo Anime Park” for the weekend, and a massive open-air stage hosted one music act after another.

The 15-foot Yamato model on display in one of the pavilions. 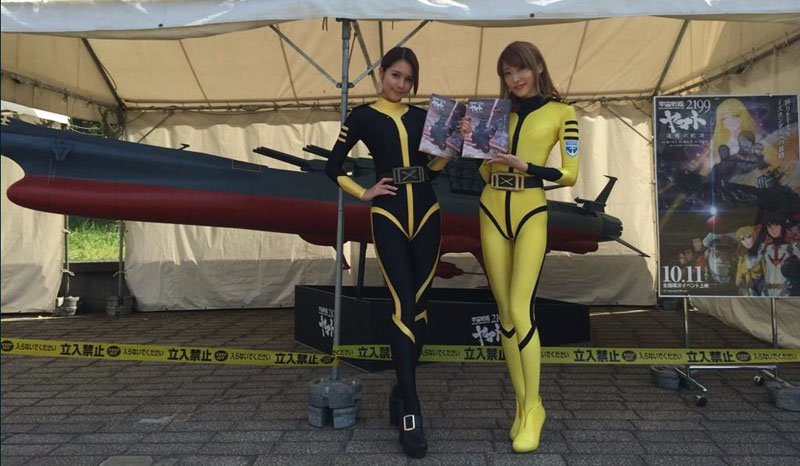 And Yamato Girls are never far away. 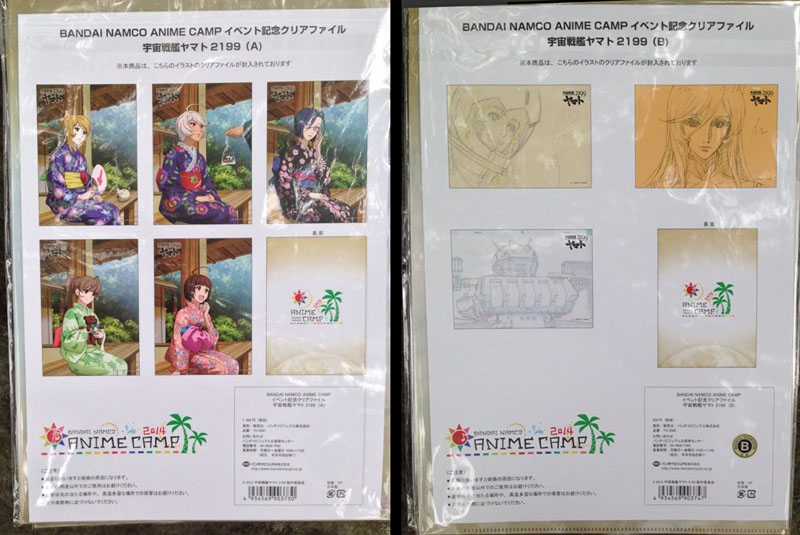 Two sets of clear files were sold. At left, the Yamato Girls are shown wearing Yukata, a style of kimono worn in summer.

The image of Yuki (far left) first appeared on a Chapter 7 theater postcard in 2013. All the others are new. 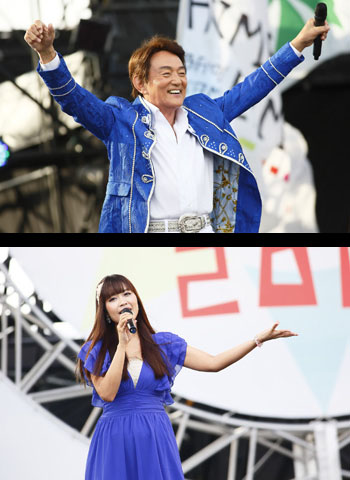 Songs from Mobile Suit Gundam dominated the stage on Saturday to mark its 35th anniversary (read about it in a bilingual blog here).

Yamato singers took to the stage on Sunday for live renditions of their respective 2199 songs. Geinou News Lounge published this report on the session:

Masami Okui is embarrassed to be on the Yamato 2199 stage with Isao Sasaki! Rough 3-minute story description by Aya Uchida

On September 21 in Sea Breeze Park, Odaiba, Tokyo, a performance of the popular animation Space Battleship Yamato 2199 took the stage on the second day of Bandai Namco Anime Camp 2014. Artists who sang songs for the project appeared, along with Aya Uchida who did the voice of Yuria Misaki.

Isao Sasaki, the legend of the anison world who sang for the original work 40 years ago, was the first to appear on the stage. He opened with the Yamato theme and The Scarlet Scarf in a voice that filled the outdoor stage and represented the world of Yamato to a captivated audience. One after another, Aira Yuhki, Aki Misato, Hironobu Kageyama, and JAM Project song the end themes from each chapter. 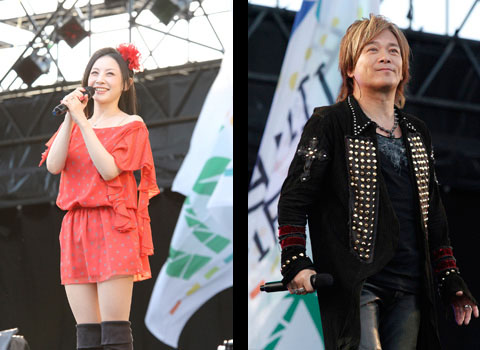 Aya Uchida appeared in a cast talk. She had narrated a video summary titled Yamato 2199 in 3 Minutes that commented on the series and ignited the fans’ expectations for Ark of the Stars, which premieres in theaters this December. Afterward, Uchida said, “we’re not home yet” and the other artists joined her on the stage.

Aira Yuhki said, “I’m glad Isao-san and I wore the same costume colors” (both wore blue). About Masami Okui, fellow JAM Project member Hironobu Kageyama said, “she wanted me to introduce her to Isao-san.” Okui looked embarrassed, but answered, “I love Yamato as a fan, and I like the song titled The Rival,” prompting a smile from Sasaki. 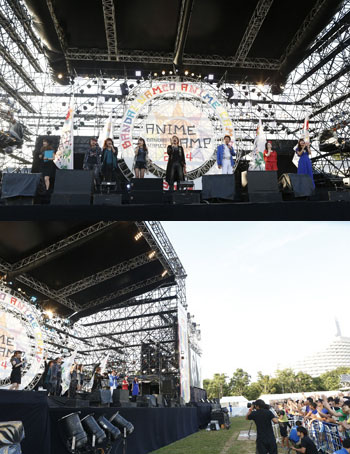 Everyone on stage for the finale

Finally, Sasaki said, “I started singing the song 40 years ago, and my fellow singers of today still like it 40 years later. I’ll continue to sing Yamato as long as I have a voice,” he declared, and the entire cast sang the Yamato theme again to bring down the curtain.

Set list:
Space Battleship Yamato and The Scarlet Scarf (Isao Sasaki)
May the Light of the Stars Shine Forever
(Aira Yuhki, from Chapter 1)
You Who Know the Beautiful Earth (Aki Misato, from Chapter 2)
Steady as She Goes Across the Sea of Stars
(Hironobu Kageyama, from Chapter 5)
Rest in Peace (JAM Project, from Chapter 6)

Cast talk:
Yamato 2199 in 3 Minutes
A Voyage to Remember trailer
Ark of the Stars trailer

See more photos at the Geinou Lounge link provided above.

Aya Uchida on stage and off with her co-stars Aki Misato (in red) and Aira Yuhki (in blue). 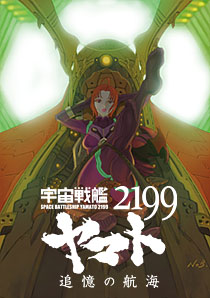 It has been five months since the Remembrance DVD and Blu-ray were listed for pre-order at Amazon.jp, so it was already known that the discs would come with English subtitles (on the Blu-ray) and a new slipcase painted by Naoyuki Katoh.

Additional announcements about these videos followed. In late August, cover art by Nobuteru Yuuki was released for the storyboard booklet (shown at left) that will be bundled with the theater-exclusive edition. Yamato Crew announced September 25 that the edition sold through their online store would come with reproductions of the voice actor scripts (above right) in the same format as Chapters 1-7. That edition will also come with a new trading card by mecha designer Junichiro Tamamori.

On September 22, the disc’s bonus features were revealed: a Yamatalk Night documentary, org charts for Garmillas and Earth, an overview of Yamato mecha, and an audio commentary by the staff.

The general edition goes on sale November 21. It can be pre-ordered from Amazon.jp here or CD Japan here.

Stills from two of the bonus features

At this time, a high-profile TV rerun was approaching its conclusion in the Kanto area’s Tokyo MX, to finish on September 30. But those who subscribed to the WOWOW channel could marathon the series to the end when the uncut theatrical/home video versions were broadcast in three late-night chunks: Chapters 1-3 on the 22nd, Chapters 4 & 5 on the 23rd, and Chapters 6 & 7 on the 24th.

Elsewhere in the TV world, a 15-second commercial for A Voyage to Remember started airing on the 24th which gave fans their first taste of Blue, the new end title song by Nana Mizuki. The captions (shown above) read New shots & newly recorded narration / 5.1 ch sound / A deeper impression is here.

In what must now be a process of well-oiled choreography, the Art Exhibition was closed in Osaka, transported 110 miles to Nagoya, and reassembled for public viewing in just 4 days. This time a Matsuzakaya department store hosted the event, highlighted on September 27 by a Yamatalk with Starsha’s voice actress Kikuko Inoue, and on October 5 by a Kia Asamiya autograph session. 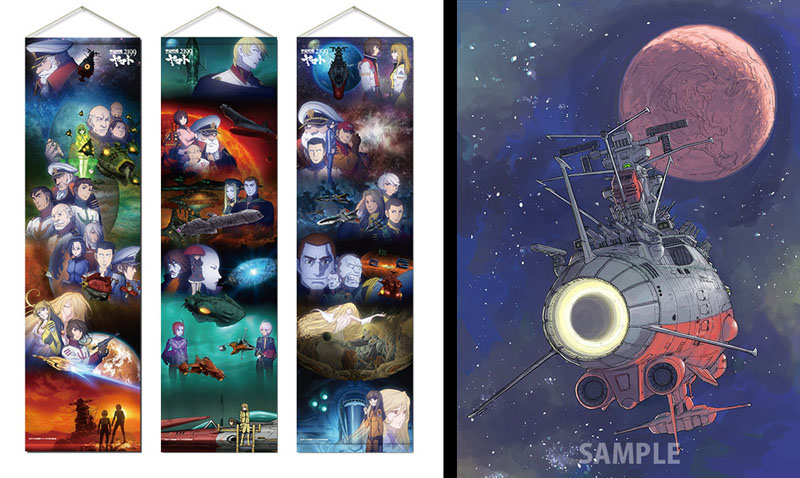 For the rest of us, the highlight was the appearance of still more new merch in the online catalog.

Kia Asamiya created three gorgeous end-credit rolls for the first (2013) TV broadcast. Over time, the first two were made into tapestries, and the trilogy was completed with the Nagoya opening. At right is a new art print by Junichiro Tamamori titled The Return.

Yamato coverage was slim this month (two pages in Dengeki Hobby, three in Hobby Japan, and four in Model Graphix) but it gave us our first look at some brand new products coming in the next few months. Some would be exhibited publicly in just two days (keep reading). 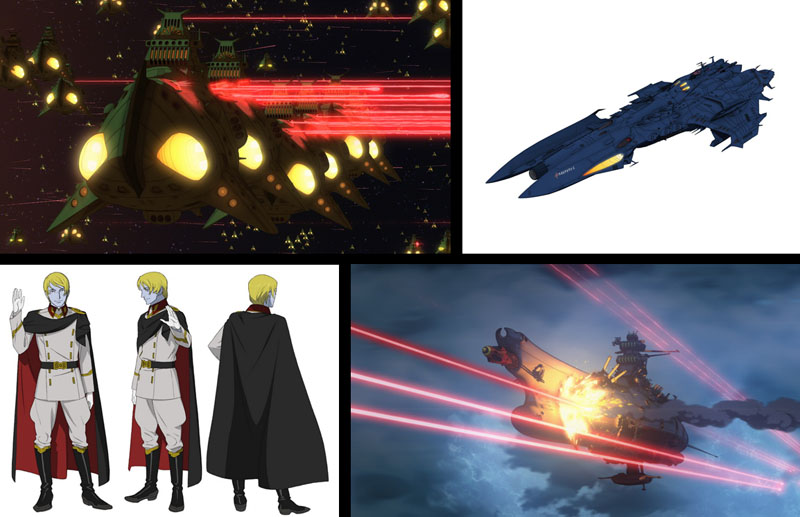 With A Voyage to Remember now two weeks off, this website ran a short promo article augmented by a huge gallery of images both old and new.

See them all here.