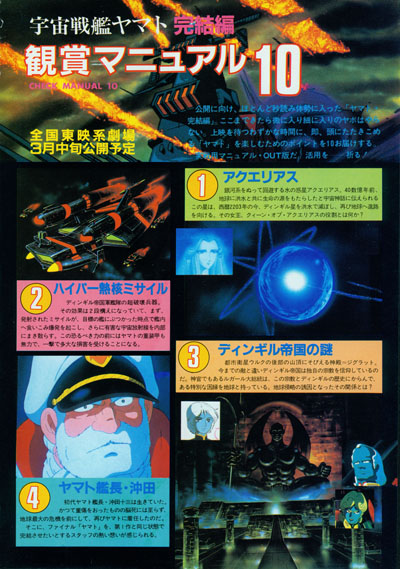 Yamato The Final Chapter has almost entered the countdown phase to its premiere. We can’t come this far without going into some exhaustive detail. In the short time we have left before the premiere, we have ten points about Yamato for you to enjoy driving into your head. A combat manual, OUT-style. We hope it’ll come in handy!

Aquarius is a water planet that wanders the Milky Way Galaxy. A myth of space says that it brought the wellspring of life to Earth with a flood, 4 billion years ago. In the year 2203, Planet Dengil is destroyed by a flood, and it turns its course toward Earth again. What is the role of the queen, the Queen of Aquarius?

A super weapon of the Dengil Empire fleet. It becomes a two-step weapon when it is launched at a ship. First, when it hits the target, it tears into the vessel with an explosion. Then it scatters harmful space radiation inside. The heavy armor of Yamato is helpless against this awesome power and takes extensive damage in one blow.

(3) Mystery of the Dengil Empire

A ziggurat temple towers over the summit at the rear of City Satellite Uruk. The Dengil Empire is different from other enemies and has faith in its own original religion. Grand Emperor Lugal weaves this religion into the history of Dengil, which has a special connection to Earth. How is this related to the Earth invasion?

Juuzo Okita, the first captain of Yamato, is alive. He was once seriously injured, but did not succumb to brain death. Now, in the face of Earth’s greatest crisis, he arrives at Yamato once again. With this, the passion of the staff is felt, as they want to bring Final Yamato to the same conclusion as the first work. 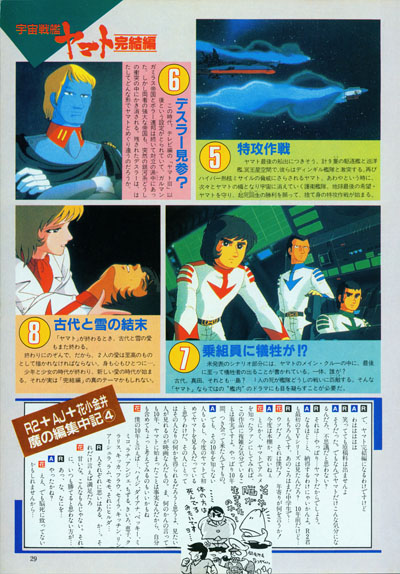 Yamato goes out with a full force of nine destroyers and cruisers. They clash with the Dengil fleet in Pluto space. Yamato is exposed to the threat of the Hyper Radiation Missiles again. The escort fleet becomes a shield for Yamato and get blasted off into space one by one. They hope to preserve a chance for victory with these desperate kamikaze tactics, and defend Yamato as the last hope of Earth.

This time, the setup of Yamato III is followed with the Galman-Gamilas Empire and Bolar Federation in the midst of conflict. But both mighty empires vanish in the sudden collision between galaxies. What kind of condition does that leave Dessler in for an encounter with Yamato?

(7) A ranking crew member is sacrificed!?

In an unpublished script, it is written that a member of Yamato‘s main crew will be a casualty in the end. Who could it be? Kodai, Sanada, or Shima? One death is comparable to a battle between fleets. So it will also be necessary to closely watch what happens “inside the ship” this time.

When Yamato ends, the love of Kodai and Yuki also ends. Because we have reached the end, the love of these two must be shown as something supreme. One heart and one body…it’s the end of an era for the boy and the girl, and a new era of love begins. In fact, this may be the true theme of The Final Chapter.

The Record of the Demonic Ending [4]

R: We won’t get paid for laughing.

A: That’s true. But why is it that Yamato alone inspires feelings like these? Don’t you think it’s amazing?

R: It is…but after all…that’s because it’s Yamato.

A: I see…although, I can’t agree with that. Did you watch the first TV series, too? It was almost ten years ago…

R: Of course, I was still a junior high student in those days.

Hana: That’s a lie! It’s me! What are you talking about, old man?

A: The bookshelf this time, huh? How young.

Hana: Anyway, for a fan who got to know anime through Yamato, our feelings toward this work are complicated. We’ve known each other for ten years, after all.

A: But there are people who haven’t known it for ten years, and I think this will even be the first Yamato for some people. I think we can gain something from those people, so it’s a movie I want to watch other people watch. Well, no matter how you put it, it’s a fact that Yamato began ten years ago, so perhaps I would do well to think about including myself with them.

R: Each and every person has their own feelings, I suppose. I suppose I should be satisfied just saying that.

Hana: You’re naive. It’s not like that. Besides, don’t think you’ll always win.

Hana: Yes, but I may already be brain dead. 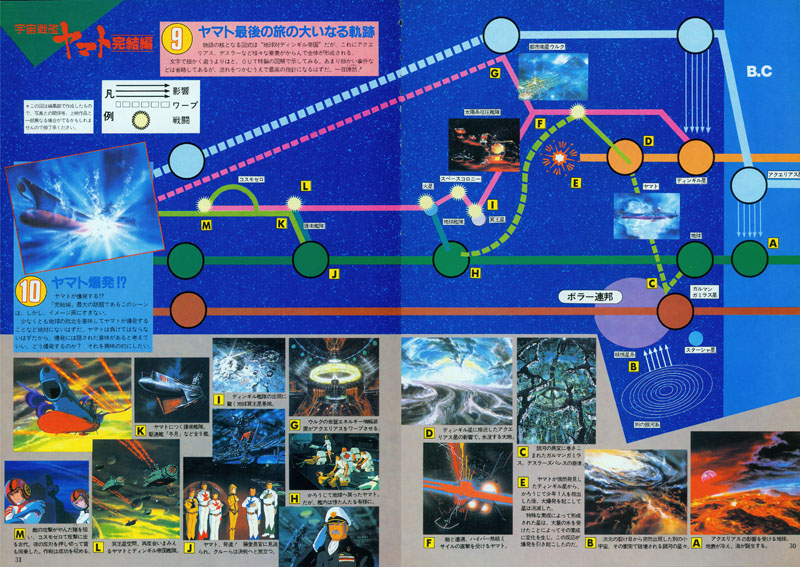 About the map: This image was created by the editorial department. Please note that the relationship of this picture and the movie may vary.

(Click here to see a larger version of the map with captions in English.)

The core of the story is “Earth vs. the Dengil Empire,” but the whole story is formed by various elements such as Aquarius and Dessler. We try to show it here in this specially-made OUT illustration and accompany it with small letters. Though some small events are omitted, it’s the best guideline to grasp the flow. It should be clear at a glance!

Does Yamato explode!? This scene from The Final Chapter is the biggest topic, but it’s just an image picture. Yamato exploding absolutely should not mean Earth is defeated in the end. Since Yamato should not be the one to lose, there must be a hidden meaning in this explosion. How does it explode? Let’s pay close attention to that. 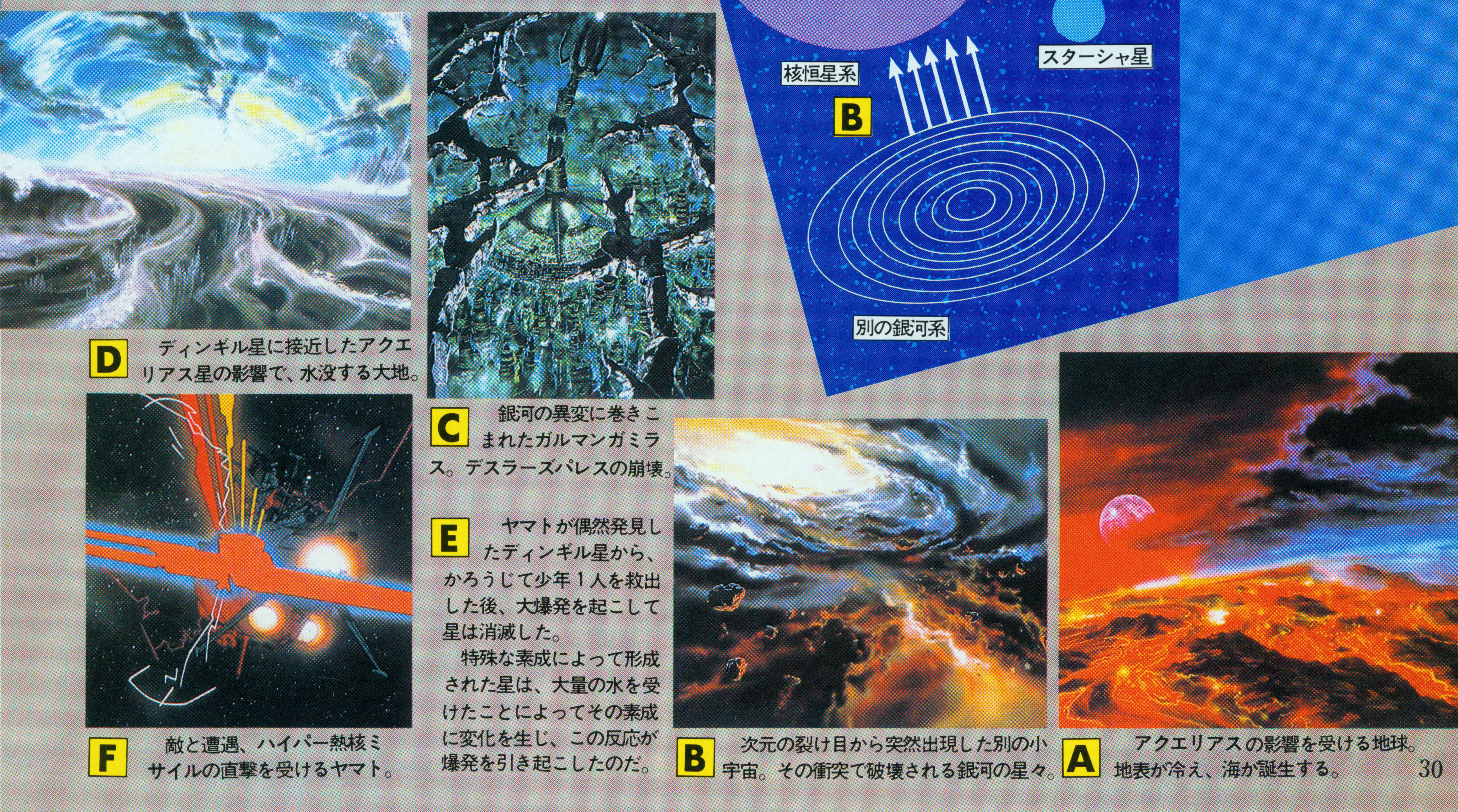 A: Earth is affected by Aquarius. The surface is cooled and the sea is born.

B: Another galaxy appears from a dimensional rift in space. Stars in both galaxies are destroyed by collisions.

C: Galman-Gamilas is caught up in a galactic cataclysm. Dessler’s palace collapses.

E: After discovering Planet Dengil by chance, Yamato barely manages to rescue one boy. A great explosion occurs and the planet is destroyed. The planet was formed of special elements that changed when they received a large amount of water, and this reaction caused an explosion.

F: Yamato encounters the enemy and takes a direct hit from a Hyper Radiation Missile. 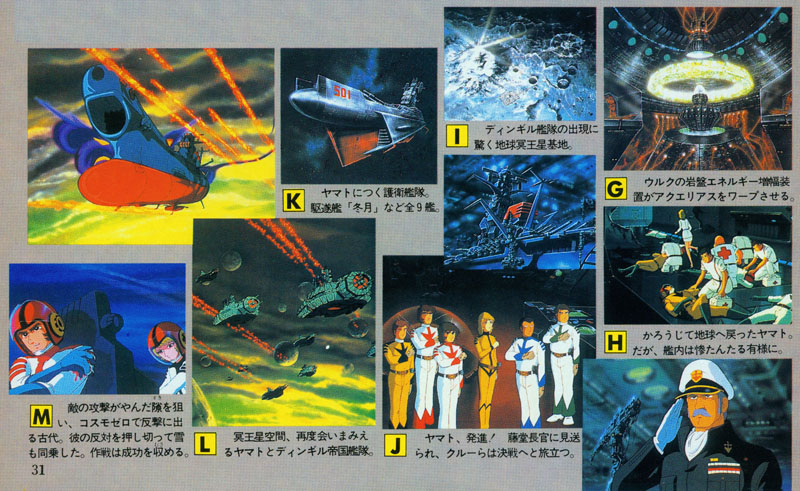 G: An energy amplifier in the bedrock of Uruk causes Aquarius to warp.

H: Yamato returns to Earth, but the ship is in a dismal state.

I: Earth’s base on Pluto is surprised by the appearance of the Dengil fleet.

J: Yamato, launch! Seen off by Commander Todo, the crew departs for a decisive battle.

K: The escort fleet joins Yamato. Nine ships in all, including Fuyuzuki.

M: The enemy attack ceases, and Kodai uses this chance to launch a counterattack in the Cosmo Zero. Yuki rides with him in spite of his objections. This strategy succeeds.