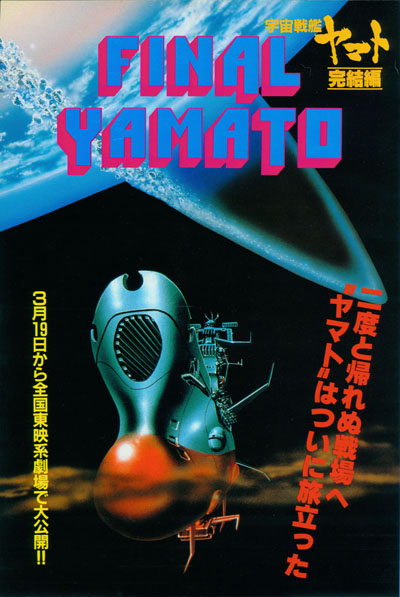 Yamato finally departs to a battlefield of no return

Headline in red bars (below):

Renewal of love! A new history of the bonded Yuki and Susumu begins now!!

Blue text at far left (below):

If it’s a girl, she’ll be named “Ai” [love]. If it’s a boy, it’ll be “Akira” [new]. I’d like to name these two children this way, putting into them all of Yamato‘s story, and watch over them forever. 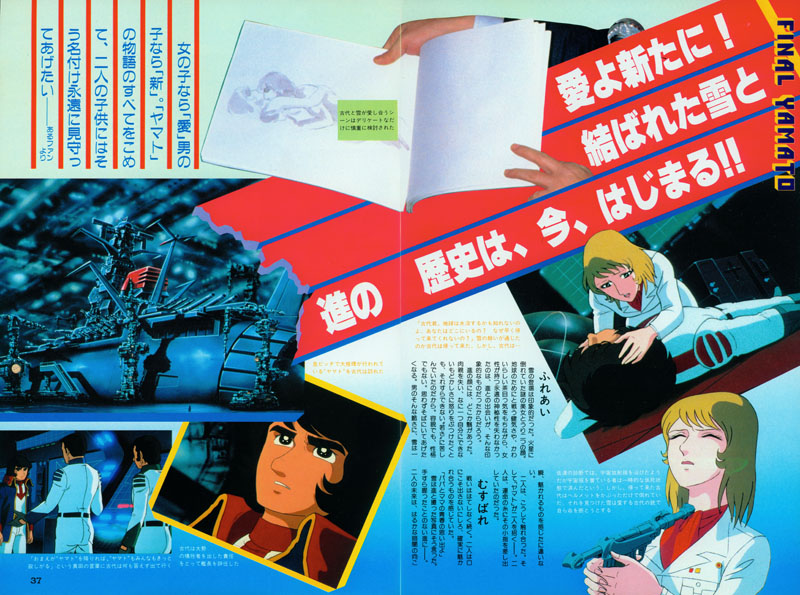 Captions on right side page:

“Kodai-kun, the Earth might be buried in water. Where are you? Why haven’t you come back to me already?” Whether it was by the wish of Yuki or not, Kodai returned. However, Kodai is…

By Sado’s diagnosis, it seems everyone was bathed in space radiation, but those who donned their space clothes in time ended up in suspended animation. However, the newly-returned Kodai fell before he could get his helmet on. Yuki discovers this and tries to kill herself with the gun of her beloved Kodai.

Captions on left side page:

Kodai takes responsibility for a large loss of life and resigns as captain.

Kodai visits Yamato while major repairs are hurriedly carried out.

“If you leave Yamato, everyone on Yamato will surely feel deserted.” Kodai leaves, not answering these words from Sanada.

The appearance of Yuki was striking. A mysterious beauty whose face looked exactly like that of the woman who fell to Mars. She fought bravely for Earth while showing endearing mischief. But she never lost that eternal mystique even after her encounter with Susumu, which is what made her so impressive.

Before seeing that face, Susumu was somewhere in shadow. He was frustrated by the loss of his family, and had nothing upon which to take out his impatient anger, because he suffered from “youth,” for which there was no help. Featureless and characterless. Without thinking, she was drawn to his side. In that moment, Yuki must certainly have been attracted to the fragility of the young man.

The fight continues endlessly. The two of them, without saying anything, definitely sense an attraction.

“A memory of papa and mama in their youth,” Yuki said when her picture was taken with Susumu. To Susumu, not even holding his hand. The future of these two lay beyond the distant darkness.

The hearts of Yuki and Susumu are bound together in this way. 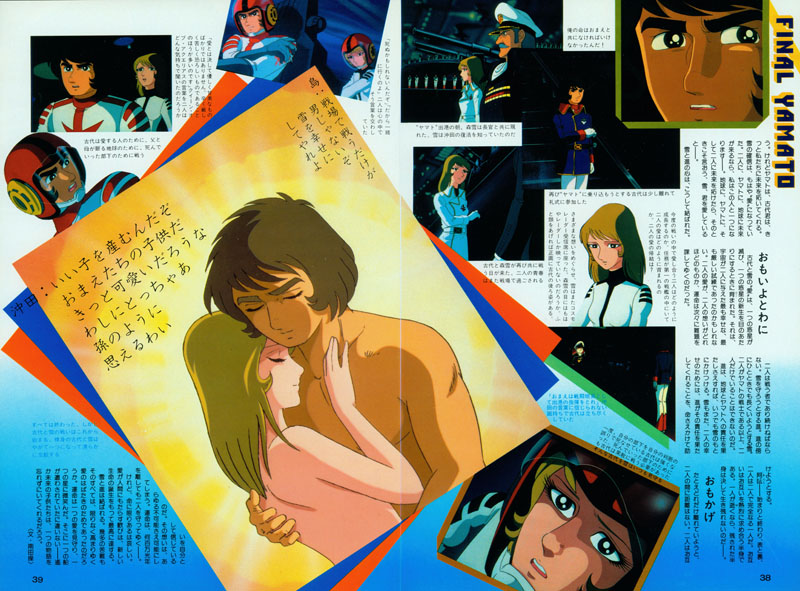 These two must continue to be soldiers. Susumu tries to protect Yuki. Yuki tries to make even a moment by Susumu’s side last longer. Since these two are soldiers of Yamato, they cannot only be a couple.

Susumu has responsibilities toward Earth and Yamato, and could rush away from Yuki at any time. Yuki, too, for the sake of their happiness, is ready to risk her life to save Susumu in order to let him fulfill his responsibilities.

Alpha and Omega, beginning and end, top and bottom. These two complete each other as a couple. Each is half a body, passionately demanding the other. If one were to die, the other half of the body could never survive.

No matter how far apart they are, there is no distance between these two. They believe in each other as strongly as they believe in themselves. That thought makes everything possible. Fate protects these two even with a million light years between them.

However, it’s sad that lives have limits. The joy that love can bring to a human being is best reached with the birth of a new life.

Yuki and Susumu are bound together. It could be that facing many hardships is what caused the heartbeat of their love to grow without limit. Fate, watching over a singular love, smiling upon a singular planet. Without a doubt, dispatching a singular ship. The children of the far future will never forget their singular story. 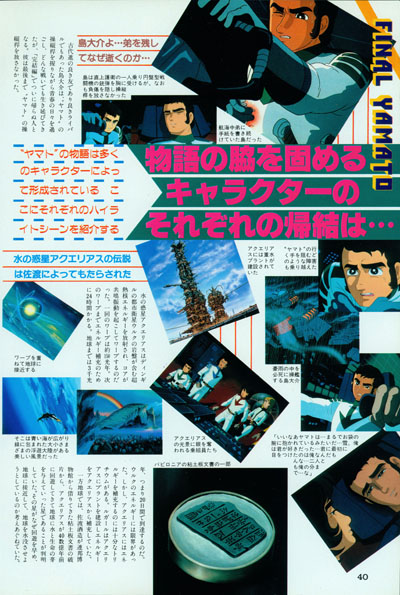 The story of Yamato is formed by many characters. We introduce each of their highlight scenes here.

The story is strengthened by the consequences for each character…

Daisuke Shima…why did you leave your younger brother and die…

The legend of the water planet Aquarius is introduced by Sado

When City Satellite Uruk projects super thermonuclear energy from its bedrock into water planet Aquarius, it causes a resonance vibration in the core that leads to a warp. One warp is approximately 150 light years. It takes 24 hours to build up enough energy for the next warp. In other words, it will take 20 days to cross the 3,000 light years to Earth. The energy of Uruk has a limit. However, there is enough tritium on Aquarius to replenish it. Lugal replenishes it from an energy plant built on Aquarius.

On a piece of clay tablet that Sado borrows from the federal museum on Earth, it is discovered that planet Aquarius passed Earth 4 billion years ago and bestowed its water upon Earth as the bud of life. They wonder why the planet now hastens its orbit to approach again, perhaps trying to submerge the Earth in water. 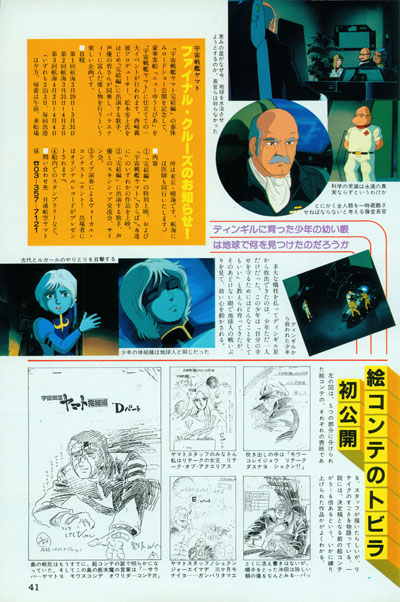 What do the young eyes of the Dengil boy see on Earth?

A heavy toll was paid to rescue just one boy from Planet Dengil. When this boy was brought up, he was told, “do whatever it takes to protect your own happiness.” But when he innocently watches how Earth people fight, it changes his childish heart.

Space Battleship Yamato The announcement of the final cruise!

To celebrate the spring premiere of The Final Chapter, the luxurious passenger liner New Utopia is being prepared for a major Space Battleship Yamato event. The plan is create a rich variety of entertainment with the singers from The Final Chapter, Producer Yoshinobu Nishizaki, Leiji Matsumoto, and several voice actors on board.

Each is three days and two nights, departing from port in the evening and returning in the morning. The departure location is Harumi, Tokyo. A doctor will also be on board.

Content
① A special screening of The Final Chapter along with one of the other films, Space Battleship Yamato, Farewell, or Be Forever.
② Meetings and autograph sessions with the singers and voice actors of The Final Chapter.
③ Live vocal performance contest (contestants will receive an original record).
④ A stamp rally on board the ship. 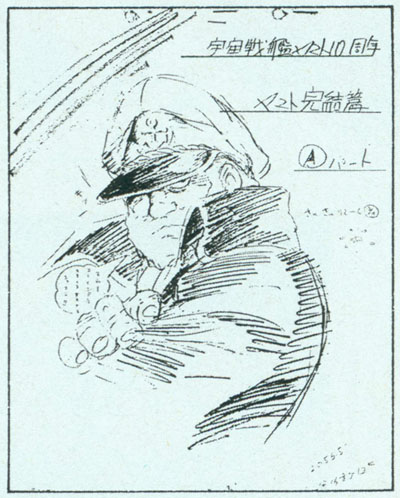 Here are the covers of each of the five storyboard sections for the movie. It seems the staff drew them, and they tell a story about the retakes. One theory is that the storyboard went through five or six versions before they were finalized. We can understand how elaborate this work is.

A PART
The word balloon says: “Don’t make us do any more retakes, people!!” 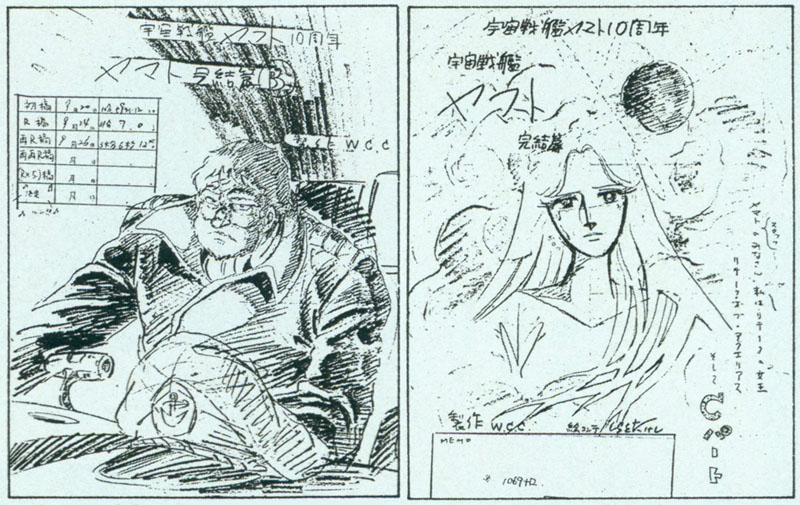 B PART (left)
There are no particular notations, but we get a rare look at the scars on Okita’s forehead with his hat removed…

C PART (right)
“Everyone on the Yamato staff, I am the Queen of Retakes.” Retake of Aquarius 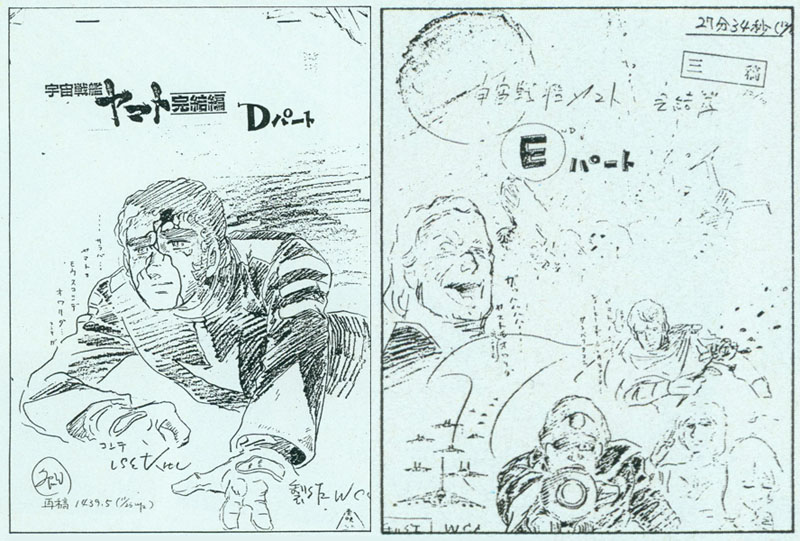 D PART (left)
It is already revealed on the cover of this storyboard that Shima is killed. His words during his death throes are: “Farewell…Yamato…storyboards nearly done…” 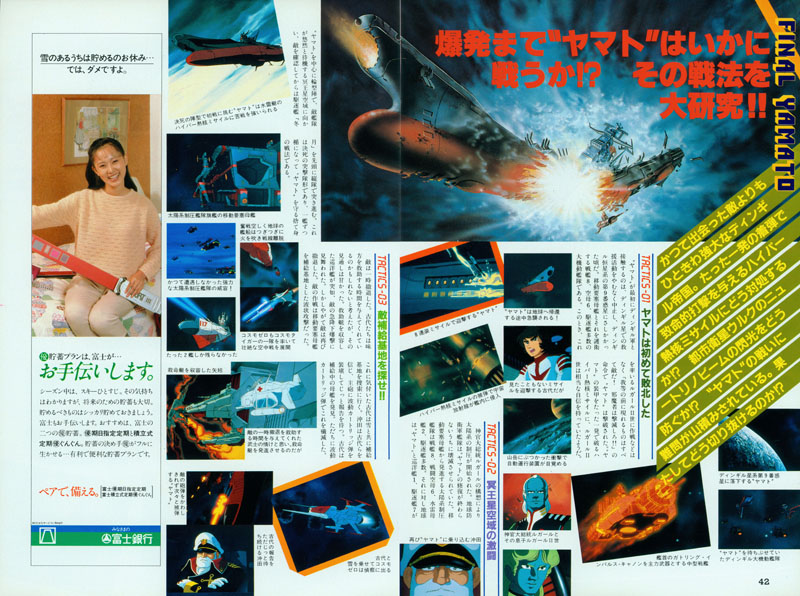 How does Yamato fight until the explosion!? We study the tactics closely!!

The Dengil Empire is remarkably more powerful than any previous enemy we’ve met. How do you deal with the Hyper Radiation Missile that can deliver a death blow with just one shot? How do you stop the flash of the neutrino beam from City Satellite Uruk? Difficult challenges pile up in Yamato‘s fight. How do you get through it!?

Yamato is defeated for the first time

Yamato first comes into contact with Dengil troops after being forced to abandon the rescue operation at Planet Dengil and approaching the ninth planet of the Dengil solar system. The mobile fortress mothership is escorted by a task force of eight battleships, six carriers, and many destroyers. Lugal II, who leads their strategy at this time, orders Yamato destroyed: “All those who appear before us are the enemy! Destroy that nuisance!!” It seems Lugal II has considerable confidence that a single Hyper Radiation Missile can break the armor of Yamato.

The suppression of the solar system begins at the command of Grand Emperor Lugal. The Earth Defense Forces fleet is annihilated before the repairs of Yamato can be completed. The solar system suppression fleet launches from the mobile fortress mothership: eight battleships, six battle carriers, two torpedo carriers, and many destroyers.

For the Earth, one cruiser and seven destroyers are in a ring formation around Yamato. With the enemy fleet waiting calmly in Pluto airspace, they confirm enemy positions and charge forward with destroyer Fuyuzuki in the lead. This is a desperate assault formation in which they use their own ships as shields to protect Yamato.

Find the enemy supply base!!

The enemy temporarily withdraws. Kodai thinks that he can use this time to rescue allies, but this prospect is optimistic. A cruiser taking on lifeboats is suddenly attacked by an enemy dive bomber. But soon the enemy withdraws again. Their strategy is to attack in waves, their movements enabled by using the fortress mothership as a supply base. Kodai notices this and goes in search of the supply base with Yuki. Okita trusts Kodai, and orders the main batteries loaded with Wave-Motion Cartridges while waiting for a report. Kodai discovers the mothership offering resupply. It is immediately annihilated by the Wave-Motion Cartridge bullets. 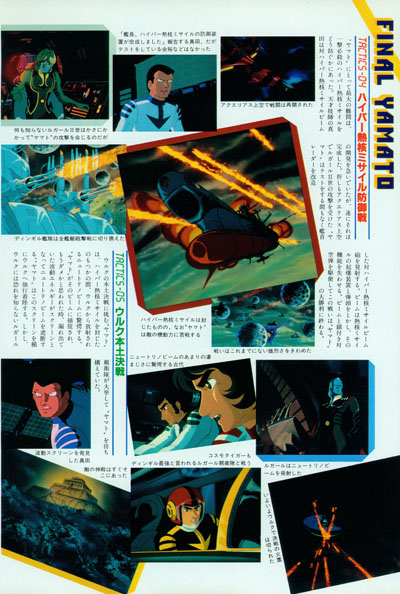 The biggest challenge for Yamato is how to counter the Hyper Radiation Missile, which can bring sure death with a single blow. Genius engineer Sanada hurried development of an anti-Hyper Radiation Missile beam, which has been completed at last. Yamato comes under fire from Lugal II in the skies of Aquarius, and with no time for a test, Yamato fires the anti-Hyper Radiation Missile beam gun from its remodeled bow radar. The beam dissolves the detonator and warhead of the missiles, wiping out their function. Making full use of the beam in tandem with anti-aircraft fire, Yamato finishes the battle with a great victory.

Decisive battle on the mainland of Uruk

Having blocked the Hyper Radiation Missiles, Yamato challenges the mainland of Uruk, and is astonished by the firing of a neutrino beam. If Yamato is caught in the beam, it seems that all is lost, but leaking Wave energy appears and works as a screen to block the neutrino beam. This screen allows Yamato to make a forced landing. However, Lugal’s fearless troops are waiting for Yamato, ready to charge en masse.