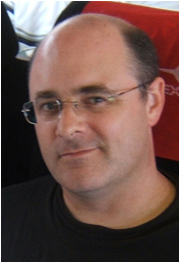 Tim Eldred here; author, artist, animator, director, psycho-fan. If you’ve come into contact with anything that says Star Blazers on it since 1995, I probably had something to do with it. That’s me on the right, all satisfied at the end of my inaugural trip to Japan in 2007. (The first of many, as it would turn out.) Howdy.

If you’ve partaken in this website adventure before, you already know what it’s all about and probably don’t need to read this. But if you’re curious to know how it got to where it is, here’s a capsule history. 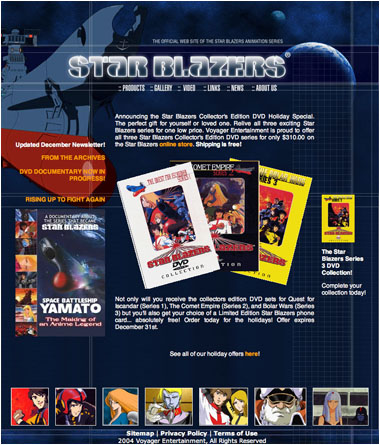 I first encountered Voyager Entertainment in 1993, a company originally set up by Space Battleship Yamato‘s exec producer Yoshinobu Nishizaki to function as his American branch office in New Jersey. Their video library consisted of all three Star Blazers TV series and all five Yamato movies. Along with my pals Bruce Lewis and John Ott, I produced a series of comic books for them through 1997, at which point comic book publishing became unfriendly territory and we went our separate ways. I followed the inspiration I got from watching Star Blazers as a teenager to seek out an animation career, and it’s been going pretty well. 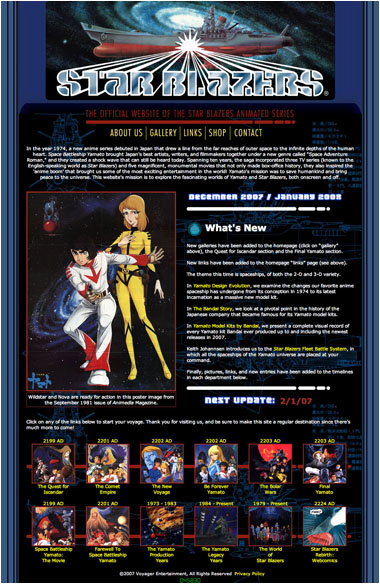 In 2000 I was approached by Voyager again and hired as a freelancer to help them convert their video line from VHS to DVD with all the trimmings. During the course of that very enjoyable project they decided to launch starblazers.com with me as the writer/editor, kicking off in the summer of 2002. Over its ten-year history, the site expanded far beyond anything any of us imagined at the start; hundreds of pages, thousands of readers, webcomics, travelogues, interviews, you name it. In late 2012 the home office of Voyager in Japan decided to take back the car keys and shut down the American operation. It would have been nice to get an explanation for this move, but none has been offered. 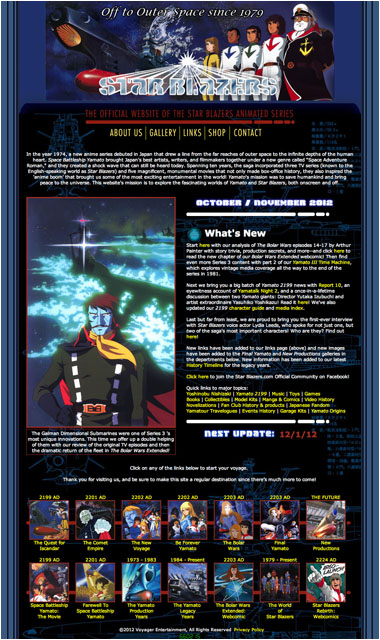 Suspension: the last update in October 2012

As a lifetime Yamato fan, ten years was not enough for me. There are still hidden realms to explore, and the call is irresistable. So although I could no longer work in an official capacity, nothing could stop me from forming my own fansite to continue the voyage, and that’s where Cosmo DNA came in. From December 2012 until August 2013, I continued working in a transitional format while an extensive effort got underway to retool everything into the new site you’re looking at right now. It’s all here in a big shiny package and hopefully will be for all time. At this point, it’s the internet’s most comprehensive English-language archive for Star Blazers and Space Battleship Yamato, and it will only continue to grow. 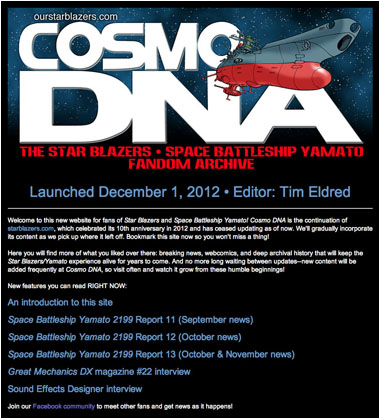 That tells you what I’m doing. How about the “why”? There are three reasons, nothing to do with money (since there isn’t any).

Reason one: because I love it. Starblazers.com was a work of pure passion. Watching Star Blazers and then Yamato as a youngster showed me what I should do with my life. Because of that, I became a professional comic book artist and animation director, and I figure the best way to pay that back is by sharing my passion for the anime that put me on my path.

Reason two: because it’s important. Anime from Japan has made the world a better place, and without Space Battleship Yamato that might never have been possible. Yamato revolutionized the medium at virtually every level and demands to be documented as a historical nexus for an entire artform. And I’m not exaggerating.

Reason three: because few others can. That’s not elitism talking, I’ve simply found myself in a privileged position. My chosen field (TV animation) has provided me with the ability to indulge my hobby for quite a long time. That shouldn’t be a rare thing, but it is. So I figure sharing the bounty with all of you might make it seem a little less rare. That said, there are plenty of other fans like me, some of whom got an earlier start, and they’re all welcome to join me on this playground. 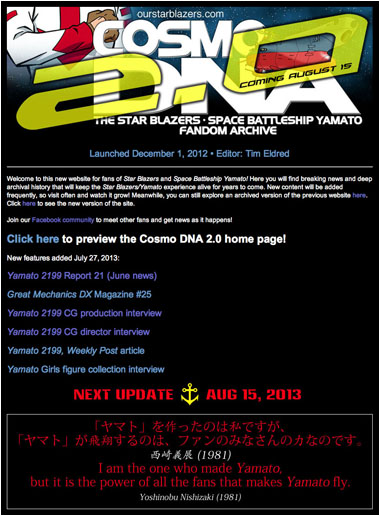 This has never been a solo pursuit. Early webmasters David Wu and Jerome Walford did more heavy lifting than they bargained for, and the staff of Voyager’s US office was nothing but supportive of my every whim, no matter how weird it sounded at first. Other writers, friends of the website, and a small circle of diligent translators have all enriched the content with invaluable contributions. But outside help was never more valuable to me than during the transition between the original site and this one, so I have to single out some individuals for special thanks:

Arthur Painter and Daryl Surat for the timely rescue of assets; Mike Pinto for generously laying the HTML foundation of Cosmo DNA 1.0 and pointing the way to the future; John Stanowski for offering out of the blue to build the WordPress version just because he wanted something fun to do; Daniel George, John Anderson, and Robert Ratliff, whose efforts were so exceptional I had to make them admins; and finally the small army of volunteers that worked tirelessly to upgrade and beta-test hundreds of pages for the simple reward of bringing the content back from limbo.

That’s what makes this OUR Star Blazers.com, and that’s why we’ll always be off to outer space together.