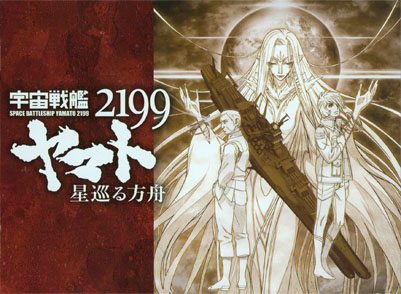 This interview with Yutaka Izubuchi was featured in the booklet that was included with the home video release of Ark of the Stars. The booklet is shown here in its entirety.

“With this movie, I wanted to show a different approach than previous feature films.”

Interviewer: Yamato 2199 reached an ending in Ark of the Stars.

Izubuchi: With this story, it was seven years since the beginning. It came as a “bolt from the blue” without warning, and I remember thinking, “Why me!?”

Interviewer: You previously described this job as “picking chestnuts out of the fire.”

Izubuchi: What I meant at the time was that when I saw the situation of the work, there were many conditions over it. I thought this was the job I was prepared to do.

Interviewer: Did you have any anxiety about the content?

Izubuchi: I didn’t have any anxiety about it. It’s a work from forty years ago, but I think the content still holds up wonderfully. Even through my eyes as a mecha designer, I thought the designs would still work great with some brush-up. The story of traveling to a planet and returning has a strength that is primal. I thought if we could correct and supplement some details and adopt a more contemporary social system and military backbone, it would have considerable appeal across the generations.

Interviewer: But wasn’t there an awful lot of pressure?

Izubuchi: If you ask 100 different fans, you’ll get 100 different opinions. There’s a huge number of fans, and each has their respective image of Yamato. A wide range of generations. From the beginning, it was going to be impossible to satisfy all of them. That’s the hard part. Still, when I took on the story I reached the turning point of life as a 50-year old, and I took it on because I thought it would be the first and last chance to remake the first Yamato series.

Interviewer: As for the design concepts, you didn’t just remodel the battleship Yamato, for instance. You made some big changes. Was it difficult to choose what to leave in from the original and what to change?

Izubuchi: I think the original first series has a high degree of completeness. Still, there were a lot of places where I thought, “Hmm, do I want to do it this way?” Even in those days, there were clearly some odd points, and in my mind I complemented it by thinking, “Surely it’s that sort of thing.” That was useful training for making 2199, wasn’t it? (Laughs)

This Yamato wasn’t remodeled from the original battleship Yamato because it didn’t sink in that shape. This is understood in the present day after it was investigated. The length was changed to 333 meters so as not to break the image of the first bridge and to take on a payload of aircraft. In fact, if you look at the design work of the original, there’s a diagram where it’s written as 330 meters. The concept of it being 265.8 meters came later to bring it in line with the real Yamato.

But as a practical matter, we don’t build this Yamato out of the Battleship Yamato. It’s a matter of course that the design shape is different from one to the other. So the concept is that it’s disguised as the wreckage of Yamato. I thought about a plan of creating that disguise for optical camouflage at first. But in the first launch the wreckage of Yamato falls off, and the image of Yamato inside it can’t quite be reconciled. I worried about that a little, but this probably wasn’t the only place where we had to rely on the momentum of anime.

Interviewer: The 2199 TV series was a successful movement that lead to the production and release of Ark of the Stars. When was it decided?

Izubuchi: It was around spring of the year before last (2013) when talk of a movie started. I wanted to make a movie for the 40th anniversary in the next year (2014). I thought doing something completely new would be impossible, so at first the idea was to do a compilation version. But cramming all that content into two hours just couldn’t be done, and the box office side wouldn’t allow it. Before the TV series went on the air, it was shown in digest form at event screenings in theaters, so there was considerable resistance to making something that had already run in theaters.

Izubuchi: Even if I wanted to do a new work like Farewell to Yamato as a sequel, with a new empire suddenly showing up for a fight, it was impossible. A new world would have to be built, and the schedule wouldn’t allow such an enormous number of new designs. Even if we made some new concepts, the absolute requirement for the story was to use as much of what we had as possible.

I came up with three patterns for a story plan. Among them was an idea to use the auto-planet Goruba which came up in The New Voyage, but that was rejected because it would be difficult to develop it. (Laughs)

Then there was the idea of seeing Yamato on the way home, an episode that might come between 24 and 25 that would feel like something from the original’s latter part. I had thought about doing that in the TV series, but it just couldn’t be done. One idea was to have an encounter with the unknown Akerius civilization. The term “Akerius civilization” had come out in the TV series, and since Gatlantis had already appeared as a powerful opponent of Garmillas, it was an enemy Yamato could encounter for the first time. The story was built based on that, and I thought this chapter could be made to look visually different.

Interviewer: Speaking of visuals, the world view of Planet Shambleau really stood out.

Izubuchi: It’s reminiscent of “what could this be” visual continuity. Gigantic remains float in the sky of a planet in a light grey void in space, and a huge ship lies in a dense forest inside the planet. The inspiration for it was the intense visual impact of a ship moving through a jungle in a movie called Fitzcarraldo. To tell the truth, I didn’t plan for it to be the Battleship Yamato at first, but I adopted the opinion of Chief Mechanical Director Masanori Nishii when he said, “Let’s make it Yamato anyway.”

It was intended to bolster the phenomenon of it coming from Kiryu’s memory, and from there we made up her mania for old-generation marine warships as the backbone.

Izubuchi: One of the themes of this movie is the succession of generations. She was put in as the heroine to embody that. When we worked out the core story of the movie, I decided to have her appear in the “Battle of the Rainbow Star Cluster” episodes of the TV series. But whether or not we would actually use her wasn’t decided at all. It was the same with Berger and Baren. I thought they seemed like they might be useful if anything were to happen in the future, so I avoided showing them being decisively killed in action.

Interviewer: Speaking of the succession of generations, Kodai takes command in battle for the first time. It’s like the situation from the original where he becomes the acting captain, right?

Izubuchi: That’s something else we couldn’t do in the TV series. In the latter half in particular, Yuki is carried off by an enemy, and we came up with the ending of having him fly the Cosmo Zero and having them meet again. If we made Kodai the acting captain, he’d be in a position where he couldn’t be so easily moved. And because Sanada is the ship’s No. 2, we didn’t have a way for Kodai to become the acting captain anyway.

This time, he’s entrusted with the leadership of Yamato because Captain Okita is in his sickbed and the first mate Sanada is busy analyzing the Cosmo Reverse System, so he can’t easily go up to the first bridge. So if there’s an emergency, the situation is set up of Kodai taking command as a senior officer. In the first fight with Gatlantis, Sanada sees Kodai’s conduct and thinks, “I can leave this to him.” In the climax, Kodai is entrusted with full command of Yamato to beat a mighty enemy, so it has a natural flow.

In the latter half of the 2199 TV series, the story continuity was set in stone, and there wasn’t time for a chance to depict Kodai’s growth as a commander. I thought it could be done in this movie simply because it’s a single episode with a conclusion.

Interviewer: The appearance of Saito was a big topic of conversation for the fans.

Izubuchi: The prologue depicts the departure of Yamato, leaving people behind on the Earth side, and it returns in the epilogue. So rather than this just being a single episode of the TV series, I thought it would be possible to incorporate Yamato‘s whole trip to Iscandar into a single movie.

The two characters who appear there embody the people on Earth waiting for Yamato to return. Saito’s role is to complain about Earth’s harsh circumstances. The opponent he appeals to is Hijikata, who embodies the patience to wait for Yamato and the belief in his close friend Okita. When Saito is complaining, Hijikata doesn’t look at him even once. As the man who always talks with his back turned, he never looks back at the past. He’s the one who begins and ends the movie. Thinking about this, in the TV series’ last episode, when you imagine an angry-looking Saito standing behind Hijikata and Director Todo, I think it increases your enjoyment when you rewatch it. (Laughs)

Interviewer: It has become an enjoyable movie that’s different from what came before.

Izubuchi: There was a place where I wanted to show a different approach than previous feature films. Of course, there’s the type of story where a powerful new enemy appears and there’s a big fight with them. There’s style and beauty in that, but I wanted to bring the feeling of a different methodology to it.

Interviewer: This movie also brings an ending to the 2199 project. What’s the current state of mind?

Izubuchi: Getting to do this movie had at first a rather irregular feeling for me, since I didn’t expect it. My personal thought after making all 26 episodes of the TV series was, “I made it.” The strong implications of the movie merely reinforces that.

However, with this movie as part of Yamato‘s journey in 2199, I think a distinction is made. It’s not depicted or explained, of course, but you can thoroughly understand that it’s part of the backbone of the work. You can imagine its implications for yourself: “What kind of race were the Akerians,” and “Is Gatlantis the Comet Empire as expected?” And I think that expands the enjoyment of the work. Of course, I have an answer of my own in my head, (laughs) but it’s too undeveloped to talk about at the moment.

Interviewer: If the young Izubuchi were to watch this new Yamato, revived after 40 years, what would be his impressions? 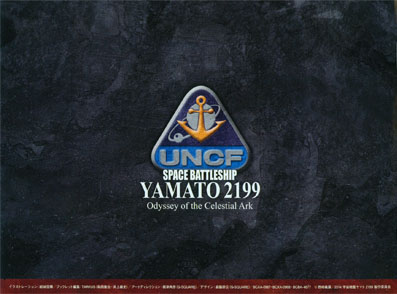 Izubuchi: I’m not sure. I might be glad to see it. However, if the current me wasn’t involved with it, and there was “another me” watching it, I’m sure I’d complain about it. “This Izubuchi guy doesn’t know what he’s doing.” (Laughs) If 2199 was acceptable to everyone this time, I think it’s because of the magnitude of love for Yamato held by both myself and the staff. Many people who found this work now make anime for a living. I can say this because I’m one of them. I feel very honored to have been able to work on it.

2 thoughts on “Director Yutaka Izubuchi on Ark of the Stars”