As a major Yamato licensor, Asahi Sonorama was very active in book publishing, particularly in the realm of manga. Its strongest competitor in this field, Akita Shoten, only had Leiji Matsumoto’s Cosmoship Yamato manga to offer (though it certainly made up for that with Matsumoto’s numerous other works) but Sonorama had the far-more-available Akira Hio in their talent pool, and offered him every new Yamato assignment that came up. With over 2300 pages to his credit, he would become the reigning king of Yamato manga. But there was one project he didn’t work on: Yamato III. 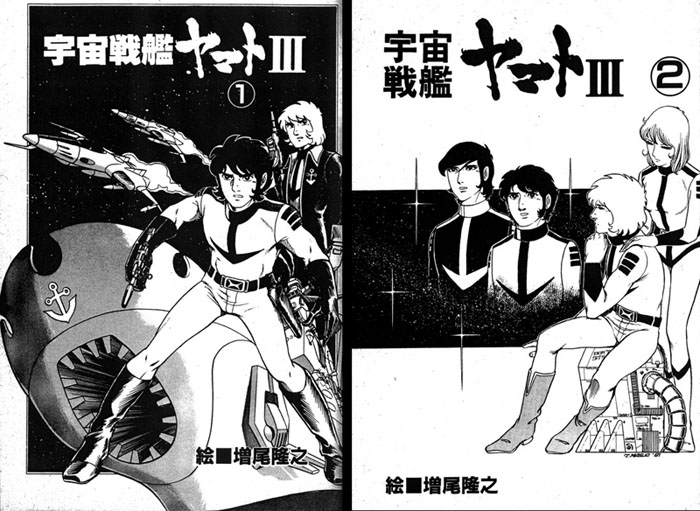 When the TV series began in October 1980, Hio was hard at work on his Be Forever adaptation, the first volume of which was still three weeks away from bookstores. With his time already spoken for, Sonorama had to look elsewhere and awarded the Yamato III manga assignment to one of Hio’s contemporaries, Takayuki Masuo.

Masuo’s career was similar to Hio’s, but instead of adapting anime programs into manga, he specialized in live-action superhero TV shows such as Kamen Rider Super, Electric Troops Denjiman, and Science Combat Force Dynaman. Masuo’s longtime love of American superhero comic books made him an odd choice for a Yamato manga, but availability is everything in the publishing world. 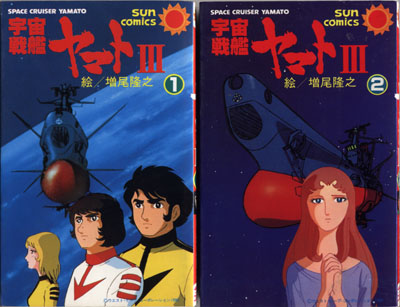 For whatever reason, Masuo’s Yamato III manga has never been reissued. Each volume ran to a comparatively slim 188 pages, far less than one would expect for a 25-episode TV series, but the early cancellation of the anime undoubtedly had a chilling effect on its spinoff products. The first volume, which went on sale just as the TV series was ending, adapted only the first nine episodes. This was a sure sign that as Masuo was beginning his work in late 1980, it was still expected that the anime would go all the way to its intended 52-episode length and the manga would probably go on for several more volumes.

The Yomiuri TV network’s decision to cut their commitment in half meant that Masuo’s second volume, which was scheduled for late July, would have to compress 16 episodes into another 188 pages. Naturally, a lot of plot had to be excised. Depending on the timeframe in which the 90-minute Yamato III compilation movie was assembled, it may have served as a revised story guide for Masuo…but evidence for this is elusive. Regardless of the inner workings, the TV series finished in April 1981, volume 2 of the manga appeared almost five months later, and Masuo & Yamato went their separate ways afterward.

Presented below are some key pages from Masuo’s adaptation of Yamato III. Clicking on the thumbnail will open a larger image of the page being described.(Remember that manga pages are read from right to left.) All artwork is © Takayuki Masuo.

From the get-go, Masuo demonstrates a willingness to draw his own spaceships rather than fall back on photocopies of animation model sheets. This dynamic battle scene is adapted from the opening of the first TV episode and shows a solid grasp of mecha in an interesting two-page montage.

Ryusuke Domon (Jason Jetter) arrives at Yamato‘s drydock with a big chip on his shoulder, instantly getting on the bad side of both Analyzer and Kodai. The ensuing fistfights are the first strong indicator of the huge influence American comics had on Masuo.

This pre-launch strategy meeting gives us a look at how Masuo handled each of the characters, with far less stylization than either Hio or Matsumoto.

Yamato launches and quickly warps away from Earth, setting off to find a new home for humankind. Here, Masuo shows his skill for precision, but depth and form are noticibly absent. His decision to emphasize the launch over the far more dramatic warp-out unfortunately reduces the impact of the event.

Domon adapts to his job, rushing food to the gunnery crew during their first combat training session. This is a fairly typical Masuo layout; characters are mostly depicted about the same size from panel to panel and backgrounds are not well-defined. The result is that dialogue-heavy pages like these lack a cohesive focal point, and don’t communicate as much as they should.

Yamato fights to defend Captain Ram and the Legendra from the Galman forces near Planet 11 (adapted from TV episode 6). Masuo is obviously more interested in drawing scenes like this, experimenting with montage-style layouts. The strongly-tilted panels are further evidence of the AmeComi (American Comics) influence.

Yamato narrowly dodges a blast from the Galman Reflex Gun at Planet Barnard. This is a good example of how a strong focal point improves a page layout, though the character art is weaker by comparison and the lack of backgrounds makes the page seem unfinished.

The AmeComi influence couldn’t be more obvious on these pages; rarely in manga (even today) is this style of inking and shading practiced.

Yamato‘s crew is awestruck by their first look at a Bolar Palace on the Planet Berth. This is about as close as Masuo gets to an establishing shot, which robs his scenes of scale and depth. As a result, even a huge palace can seem claustrophobic.

Yamato struggles against the Galman Dimensional Submarines, as seen in TV episode 14. The full-page shot on the right sets up a great dramatic moment which is then short-circuited by an unclear connection with the action on the left. One of the primary rules of comic book storytelling is that a reader should always be able to tell where the characters are in relation to each other. These pages could have benefited tremendously from that rule.

During the Submarine battle, Kodai is wounded and knocked senseless. (He dared to briefly wear the captain’s hat earlier in the story–coincidence?) The poses are clearly drawn once again from American comics, but the choice of camera angles severely reduces the impact of the moment. This scene occurs roughly halfway through volume 2 of the manga, at which point the artwork becomes very rushed, as if Masuo was pushing to finish as quickly as possible.

Dessler and Kodai are finally reunited in person. Unfortunately two full episodes of TV material are reduced down to just these two pages of manga. And there is no sense whatsoever of the location in which it’s happening.

There aren’t enough manga pages left for Yamato‘s crew to set down on Planet Phantom (as they do in the TV series) but they see the spirit of Captain Okita nevertheless. Interestingly, this image of the captain is essentially traced from a Matsumoto drawing in the Cosmoship Yamato manga.

In the climactic final battle, Ageha (Flash) kamikazes into the Bolar Space Fortress and destroys it. At least, that’s what you’re meant to believe. It’s hard to make the connection from the lackluster storytelling on these two pages.

With Earth saved once again, Yamato flies homeward. At the bottom of this last page, Masuo writes (in English) his thanks to five other individuals, probably the assistants who helped him complete this manga assignment. It’s difficult to believe that a manga drawn by six people didn’t look better, but there is much about the Yamato III manga that defies explanation.

Akira Hio would take up the reins again for the last remaining Yamato manga, raising the standard back up to expectation. We can only wonder how he might have performed under what must have been enormous pressure with Yamato III.

One thought on “Manga by Takayuki Masuo”