As the Banpresto arm of Bandai was closing down its groundbreaking line of Yamato toys in late 2000, two of its sister divisions from the toy & hobby group were lining up to take over. The first was Bandai Co., Ltd. (maker of all the world-class toys and model kits for which the company is best known) and Megahouse Corporation, a maker of games, figurines, and character-based goods. Their output was not as prodigious or varied as Banpresto, but they definitely made up for it in quality…

Right out of the box, Bandai threw down a fearsome gauntlet to other toymakers. Billed as 1/625 scale on the box, this Yamato stretched to an impressive 17″ (second only in size to Popy’s classic “Big Scale DX” Yamato from 1980) and easily rivaled all previous Bandai models for precision and detail. Constructed of both metal and PVC, it had impressive weight and numerous action features. Out of pure fanboy bravura, it came with a bonus “Cosmo Cleaner D” kit (below right) packaged in the mode of the classic Bandai Mechanic Scale models of the early years. 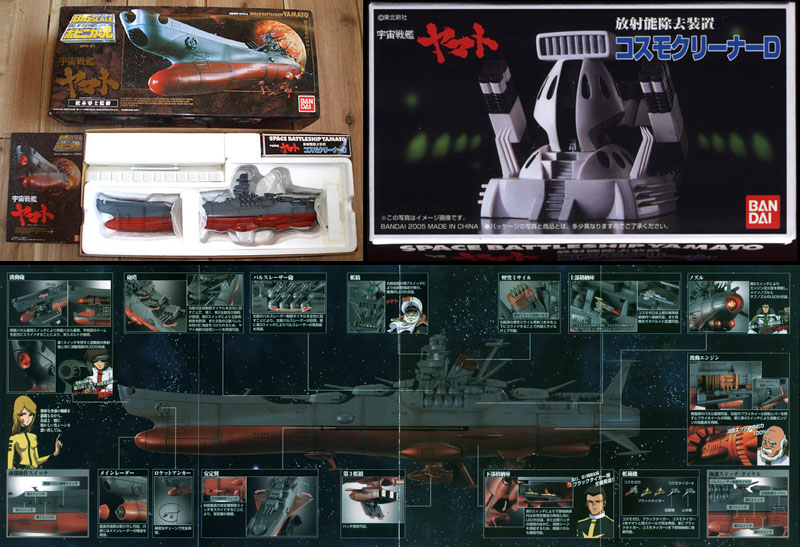 The foldout insert (above) displayed all the working features of this masterpiece: a lightup wave-motion gun with sound effects, a removable panel for the firing mechanism, rotating shock cannons and pulse lasers, light-up bridge with sound effects, slide-out smokestack missiles, a light-up engine with rotating flywheel and more sound effects, removable bow cap (to display sonar), rocket anchors on chains, pop-out wings, opening belly hatches, and a complement of five fightercraft. The entire unit came prepainted and required minimal assembly. It also began to explore hybrid design territory with the shape of the lower hull, edging slightly toward the 1999 Playstation Yamato, which was fully realized in Bandai’s 1/350 scale model in 2007. Prior to that, the “Soul of Popynica” toy, named in recognition of Popy’s previous reign, was king of the hill. 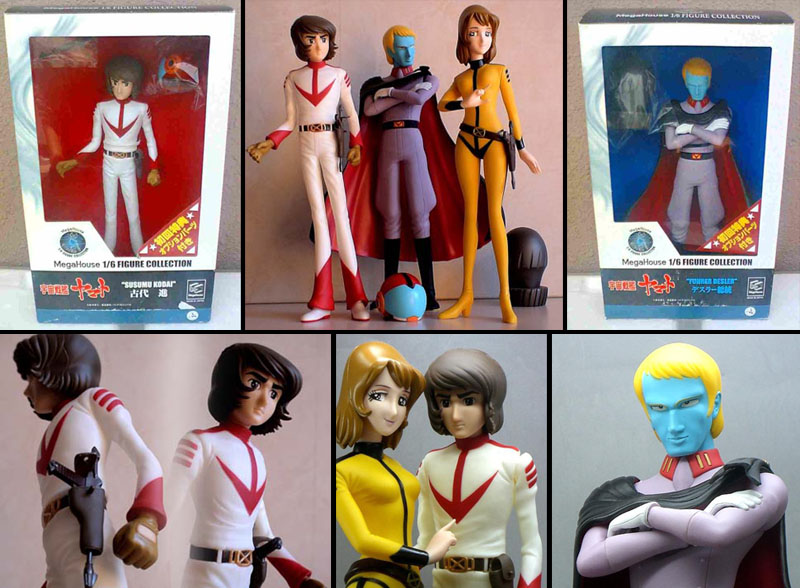 Rather than compete with a Yamato of its own, Megahouse played to its strengths: the design and manufacture of character figures. Liberty Planet had produced its last figure at the start of 2001, and Megahouse picked up exactly where they left off with two very striking PVC statues of Kodai (Wildstar) and Dessler (Desslok). Each came with accessories, a helmet & Cosmogun and an Ultra-Menace Missile respectively, and paired up nicely with Liberty Planet’s 1/6 Yuki as seen in the photos above. You can visit Megahouse’s website here.

Four years would pass before another Yamato toy emerged from Bandai’s nerve center, but when it did it had just as much impact as the BPX-01. During the intervening years, a new category of toy had been created called the “Trading Figure,” a miniature that was part of a series, packaged somewhat like trading cards. You would only find out which figure was inside after you bought and opened the box–and then presumably traded doubles with your friends until you achieved a complete set. The idea was somewhat of an anachronism, at least in the eyes of collectors. Most would simply buy a case and be done with it, or wait until a local toystore did the buying and dividing-up in advance. Either way, the “trading” part of the process was not required. 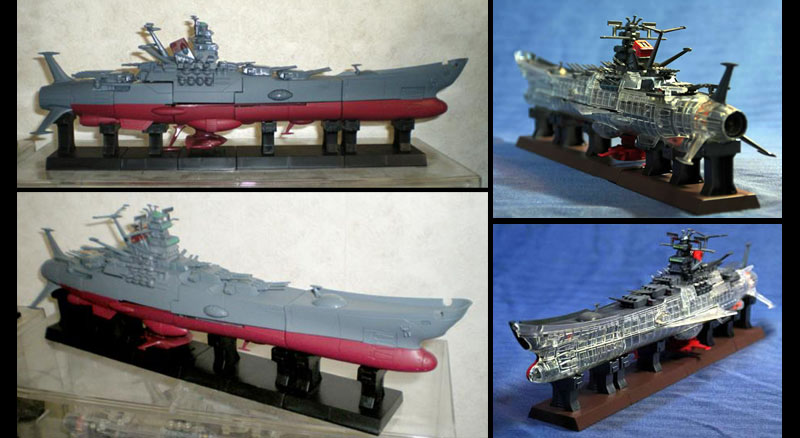 The inspiration for the Yamato Mechanic File was the same as that for Space Battleship Yamato itself: the original battleship. When the hit film Men of Yamato hit Japanese cinema in 2006, it was followed by a wave of Battleship Yamato merchandise, including a trading figure set that allowed you to piece together a model of the ship from the inside out. Bandai went the next logical step and created the Mechanic File, which was divided up into eight sections all sold as individual blocks that could be pieced together into a 15″ model, just a little shorter than a 1/700 scale kit.

Shown above right, this variation was identical to its predecessor on the inside, but the exterior parts were molded entirely in clear plastic for a cutaway view. The original was so complex that removing any single piece usually required a long reassembly, so some fans may have been relieved to get the clear version instead.

Since Bandai now had a firm grip on the big-scale ships, Megahouse’s next move was toward the small. Encouraged by the continuing success of trading figure toys, they launched this set of five miniatures which were widely distributed and warmly received. Based on the first TV series, they consisted of Yamato, the Yukikaze (known to Star Blazers fans as Alex Wildstar’s ship, the Paladin), and three Gamilas vessels: a destroyer, a carrier, and Dessler’s flagship. Compact and easy to display almost anywhere, they caught on and set the stage for more. (Not surprisingly, Megahouse also makes Cosmo Fleet Collections for Mobile Suit Gundam.)

Based on Farewell to Yamato, this set followed the same scale and format as the first, but expanded up to eight components. They were: Yamato with wings out, Andromeda, an EDF Battleship, a Comet Empire missile ship, Dessler’s “new style” Battleship, and three color variants of the Gamilas tri-deck Spacecraft Carrier. Each of the three carriers came with its own specific fighter, as deployed by General Lysis in the first TV series.

The interval was breathtakingly short, a mere four months, before Megahouse’s next set hit the stores. Also based on Farewell to Yamato, this one included a cutaway Yamato, Single-deck and Double-deck Comet Empire Spacecraft Carriers, Zordar’s Dreadnought, and Captain Okita’s Battleship from series 1. Each of these came with a bonus mini-craft. The Dreadnought included a tiny Yamato, probably the smallest ever.

Megahouse cherry-picked the first three sets to populate this one, reissuing ten of them for fans who missed their earlier opportunities. One could question the need for such an early reissue, and the answer might be surprising: Megahouse had competition in the Yamato trading figure arena. Even more surprising, said competition came from within Bandai itself as seen a little farther down the page.

The name is self-explanatory on this one; a second “best of” set. Eight were reproduced from previous sets with two new additions: Yamato with an asteroid ring and Dessler’s flagship from Series 3. 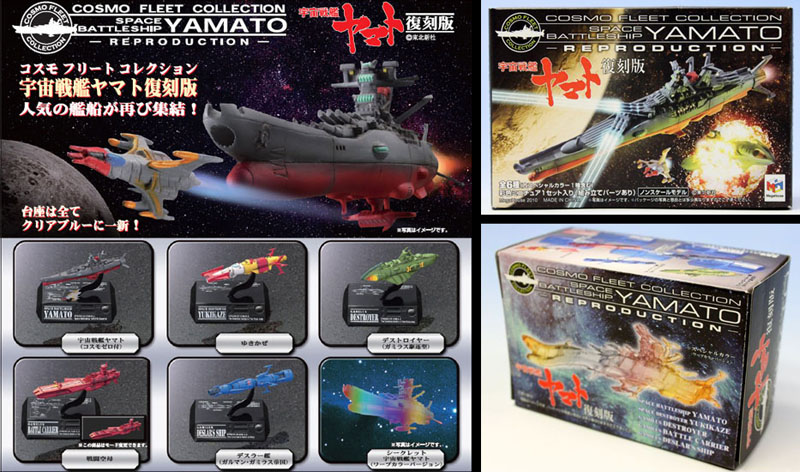 The last of these sets was a reissue of the first set with a single new addition: a translucent Yamato in “rainbow warp” colors.

After 25 years of separation, the name ‘Popy’ finally appeared on a Yamato product again with this set of 10 miniatures, roughly the same size as the original Bandai Mechanic Collection model kits. Like the Cosmo Fleet collection, they were sold in the trading figure format and probably filled the same spot on store shelves when the others vanished. Also like the Cosmo Fleet, they proved popular enough to incorporate other licenses such as Galaxy Express 999 and Captain Harlock.

Several things set the Mechanical Collection apart from the Cosmo Fleet. More precision, stunning box art, heretofore unseen spaceships, and a gorgeous collector’s card with each one. The first set, for example, included the EDF Destroyer from Final Yamato. Popy got extra mileage out of this one, filling out the set with six differently-numbered versions of the same ship. To motivate collectors, there was also a “secret” ship, which turned out to be a differently-colored Yamato. Close observers of minutiae may notice that only the Popy ‘P’ appears on the packaging, indicating them as the distributor only. The actual manufacturer was another company called Zacca P.A.P., which is separate from the Bandai Group. You can see their Yamato page here. 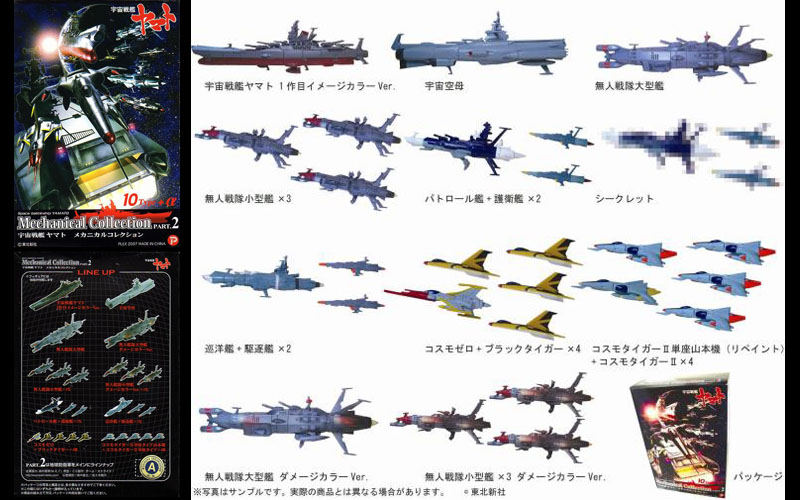 Popy stayed involved in the series as a distributor while the name ‘Plex’ (yet another Bandai sub-group) began to appear instead on each ship’s support stand. Set 2 expanded the number and variety, continuing to include a bonus collector’s card in each box. The set included both types of the Unmanned EDF Battleships from Be Forever Yamato. There were also battle-scarred versions of these, along with a battle-damaged Yamato. 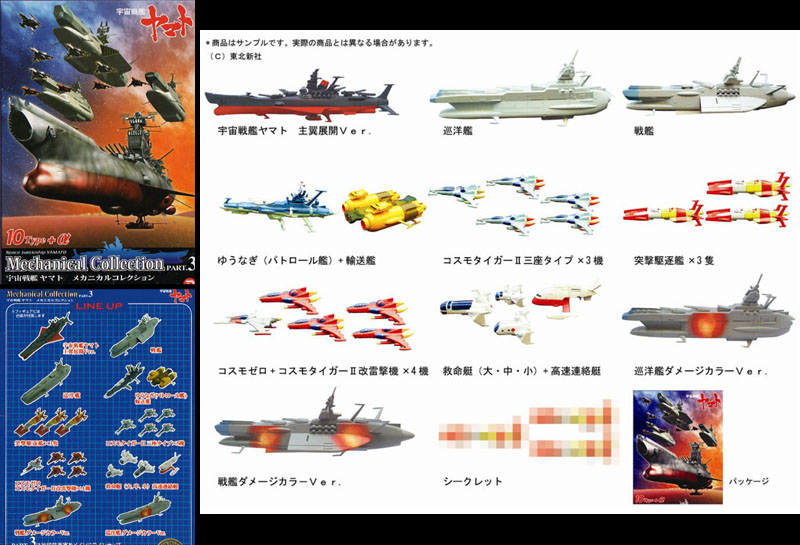 As this set was in production, Popy was finally absorbed into the Plex division of Bandai, but the Popy ‘P’ continued to appear on the boxes. Zacca P.A.P. kept up a fast pace as the manufacturer. Set 3 included even more ships that had never been modeled before, such as the Cargo Hauler and red Cosmo Tigers from Farewell to Yamato, the Presidential Yacht from Be Forever, 2 types of medical shuttles, and the EDF Battleship and Battle Cruiser from Final Yamato (with battle-damaged versions of each thrown in for good measure).

Set 4 was 80% Gamilon, composed mostly of all-new ships never before available such as Schulz’ Battleship, the green Cruisers and Missile Ships, the ground-based Reflex Gun, and three Yamato support craft. The “secret” ship in this set is a version of the red Gamilon battle carrier with the flight deck rather than the gun deck.

Click here to see a gallery of customized ships from the Mechanical Collections (48 images).

Set 5 was a gathering of previous ships that all appeared in Farewell to Yamato to mark the movie’s 30th anniversary. The “secret” ship turned out to be a gold-painted Yamato.

The second set was entirely new, a lineup of fightercraft that included a Black Tiger, a Cosmo Zero, and five variants of the Cosmo Tiger II. This set also had a “secret” ship, an alternate Cosmo Zero with a silver paint scheme. Conspicuously absent were the red snub-nosed Cosmo Tiger variant from Farewell to Yamato and the grey-and-green variant from Final Yamato. There will always be more to do…