Since the resurgence of Yamato toys nearly a decade ago (as of this writing) advances in toymaking technology and artistry have both worked their magic to expand the definition of ‘toy’ far beyond something kids play with and outgrow. We’re now in the age of the Designer Toy, that curious borderland where the raw materials of childrens’ entertainment are elevated by the hands of a craftsman into something approaching statuary. Part of the craft means obeying the old rules, ensuring that the resulting hybrid is still sturdy enough to be freely handled, but also endowing it with so much care that its owner is pursuaded instead to treat it as art. Not unlike a lovingly-restored classic car, there is no doubt it can still fulfill its original purpose, but its value is now measured on a different scale.

Two companies in particular stand out for the craftsmanship they have brought to the world of Yamato toys, and their complete (so far) product lines are presented below.

From 1999, this elite Japanese studio made high-end Yamato toys the centerpiece of its operation, starting as most fan-run companies did, making and selling limited-edition garage kits. They did well enough at this to expand into the manufacture of PVC figures and became highly respected by collectors for their care and quality. An operation like theirs was pure wish-fulfillment, a chance to actually make the stuff you longed for in your childhood.

Liberty’s first releases were polystone garage kits of two iconic Yamato mecha: Kodai’s Cosmo Zero and the saucer-shaped Domelaz II, the ship commanded by General Domel (Lysis) in the first TV series. Like all garage kits, they require skill sets of the builder that go far beyond trimming and gluing, but the materials (usually vinyl or resin) are more durable and in the hands of an expert the end result can be breathtaking. A great many other Yamato garage kits have been produced by numerous small companies and will be examined here in a future article. Liberty Planet also released a garage kit figure of Yuki (Nova) in 1999 which is not pictured here.

The next release from Liberty was this amazing full-scale Cosmogun, which looked almost as good in its raw form as when painted by an expert (above right). 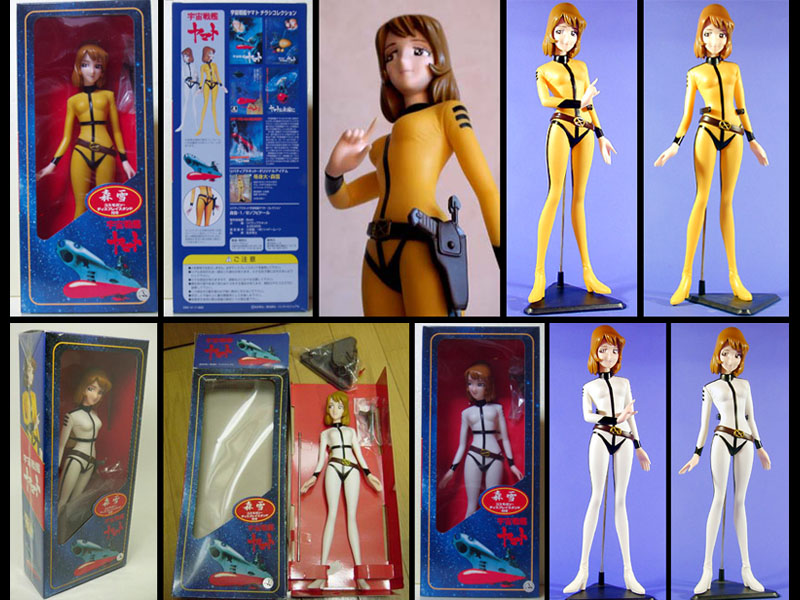 Liberty struck gold with this lineup, sculpted in 1/6 scale (about a foot tall) and cast in soft vinyl (“sofubi” in Japanese shorthand) for exquisite results. Each figure came fully painted and ready to display. It was also easy to produce color variants and swap out the right arm for A and B poses, each sold separately (above). 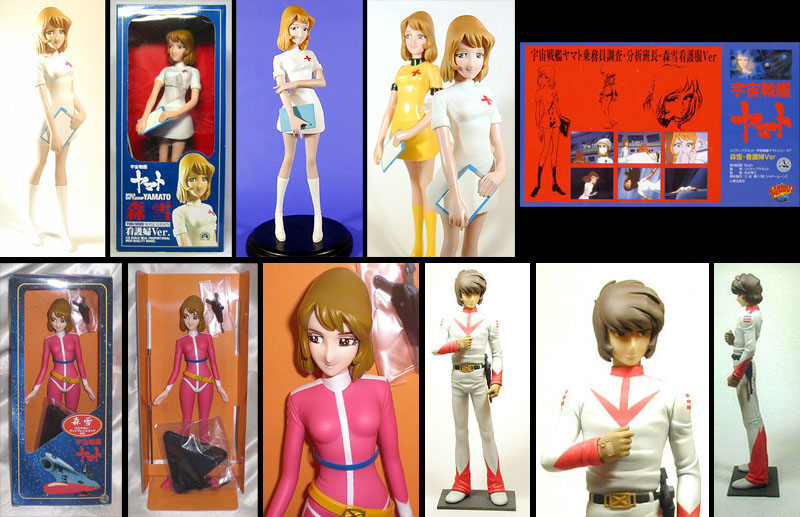 The company followed up with another Yuki doll in her nurse’s uniform (top row above), again varying the available poses and colors to satisfy all tastes. A limited-edition Yuki in pink crew uniform (bottom row left) was sold only at a December 2000 hobby show. Less variable but no less impressive was a 1/6 Kodai figure (bottom row right), also released in 2000.

All of Liberty Planet’s Yamato toys came with a bonus insert card. This one came with the Yuki figures; the front had background info from Series 1 and the back had a drawing by Leiji Matsumoto. This particular card was autographed by Yuki’s voice actress, Yoko Asagami. 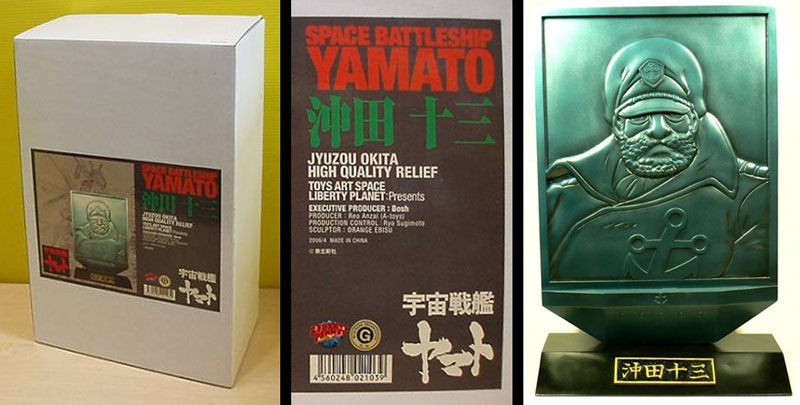 The Yuki sofubi dolls were strong sellers for Liberty Planet for several years, and when their next Yamato product rolled out it surprised everyone: a self-standing 40cm (almost 16 inches) relief plaque of Yamato‘s captain, cast in polystone and modeled on the design from Farewell to Yamato. A talking ghost version was presumably too complex and time-consuming to make. 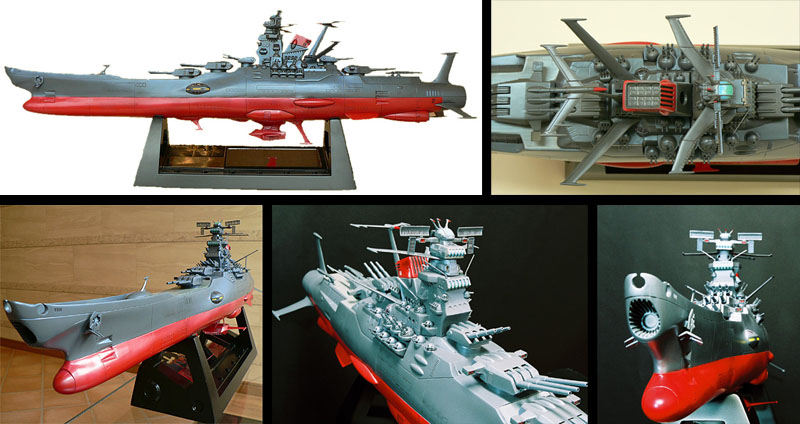 Liberty’s masterpiece was this picture-perfect polystone/PVC Yamato, a full meter in length, prepainted and needing only minor assembly. The version shown here is actually the second edition; the first was released in 1999 and used a slightly different sculpt (See an extensive photo-record of both versions here). A third battle-damaged version (below) with Gamilon drill missile was released in early 2008. The downside of such an outstanding piece is that it comes at an outstanding price, well over $3,000 US. On the other hand, it’s probably the only one you’d ever need. 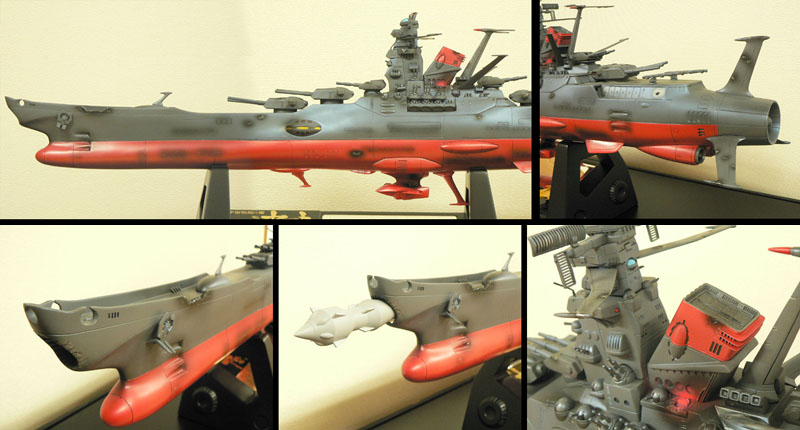 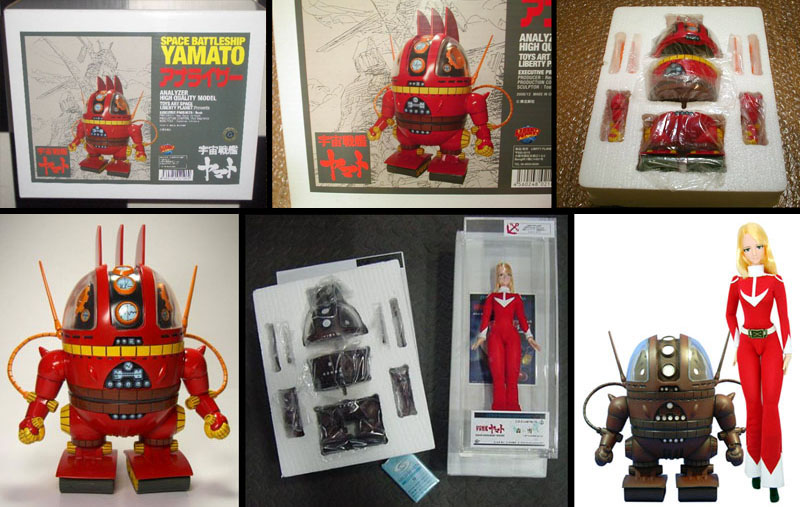 Another Liberty product was their polystone/PVC Analyzer which also required only minimal assembly and built up into a near-perfect replica of the animation design (the arms are unfortunately a little too slender). A variation of this model was produced in an alternate color scheme and matched up with a Yuki doll from another designer shop called Zero Goods Universe. Both were based on early character designs by Leiji Matsumoto and released in tandem as the “1974 First Design Version Set.” For the full scoop on Zero Goods Universe, keep reading. 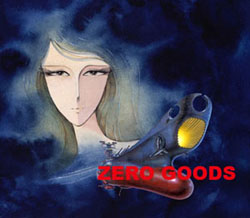 Entering the fray more recently than Liberty Planet, Zero Goods Universe (you can’t help but admire the name progression) is a more specialized operation, focused almost entirely on finely-sculpted dolls with delicate features and carefully-tailored accessories. They established a strong working relationship with Leiji Matsumoto early in their history (‘Zero’ is one possible translation for ‘Leiji’), acting as a broker for his enormous archive of work to museums, conventions, and publishers. Their relationship was strengthened further when Zero Goods took their cue from Miyako Maki, Mr. Matsumoto’s wife and a skilled dollmaker, and developed the “Leiji Character Doll Series” shown below. They have invested an enormous amount of time, attention, and dedication to a line of 1/6 scale dolls that are far and away the world’s most exquisite three-dimensional renditions of his characters. At latest count, the “Leiji Character Doll Series” tops 30 separate figures with no end in sight.

The first “Leiji” release was Kei Yuki from the Space Pirate Captain Harlock TV series. Other characters from Harlock and Galaxy Express were to come, but the women of Yamato (primarily our beloved Yuki) would pop up again and again for repeated makeovers. All of these are pictured below.

Release No. 2 (Feb. 2005) was Queen Starsha of Iscandar, accompanied by release No. 3, her sister Sasha (above left). Both shared the same costume in different colors, and Sasha came with her very own message capsule. Release No. 5 (Oct. 2005) was the Yuki “Town Version,” wearing the jumpsuit costume from Farewell to Yamato. Fittingly, the costume was created by a professional fashion designer back in 1978.

Release No. 6 (Jan. 2006) was Yuki in her wedding gown, as seen in the epilogue of Final Yamato. Leiji Matsumoto himself approved (far right).

Release No. 7 and 7ex (May & June, 2006) were alternate versions of Yuki in her nurse’s uniform, matching colors seen at different points of the Yamato saga. Both came with the slip as seen briefly in Farewell to Yamato and Yamato 2.

Also numbered “7ex” for some mysterious reason was Yuki in her negligee (June 2006), almost as seen in the first TV series but not quite so pink. Release No. 8 (Aug. 2006) finally put Yuki in her proper crew uniform, complete with Cosmogun.

Release No. 9 (2006) provided the white Final Yamato variant of Yuki’s crew uniform and upped the ante with a white peacoat, a first for any Yuki figure. No. 15 (Dec. 2006) was a special version based on one of Leji Matsumoto’s first designs for Yuki with a different crew uniform.

As mentioned earlier, this “Original Design Version” was released in tandem with a differently-colored Analyzer polystone figure from Liberty Planet.

The most recent version of the Yuki doll was No. 29 (Dec. 2007), the Yamato III version; a reissue of the standard crew uniform dressed up with the navy blue peacoat. The one pictured here was signed by Leiji Matsumoto.

The newest addition to the doll lineup is shown above left, Sasha from Be Forever in her blue crew leotard, coming it at number 31 on the list. incredible as it may seem, many Yamato dolls are still left to be made. There is Sasha in her civilian dress (center), Sada from the Dark Nebula Empire, and the oft-forgotten Queen Melina of the Bee People (far right)

…and that’s not all. Above, we have Trelaina, the Queens from Yamato III, three more Yuki outfits from Be Forever and one remaining dress from Series 1. Shown below, we have two Gamilon maidens, two versions of Sabera (known to Star Blazers viewers as Princess Invidia), and Yamato III heartthrob Wendy Singleton. That’s a potential 15 more dolls before Zero Goods runs out! 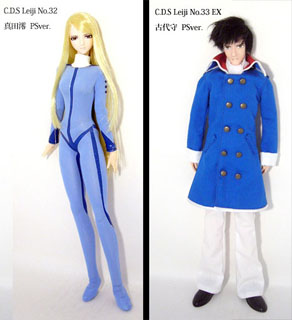 UPDATE: since this article was originally published in April 2008, the artisans at Zero Goods have continued their work. In August 2008 they released Character Dolls 32 and 33, shown here: Mio Sanada (Sasha’s alias) in her Playstation 2 costume, and their first-ever male Yamato character, Mamoru Kodai (Alex Wildstar). Watch this space for further releases!

Other than the “Leiji Character Doll Series,” Zero Goods also released this human-scaled accessory: a pendant fashioned after Yamato‘s rocket anchor (May 2005), approximately scaled to Bandai’s “Soul of Popynica” Yamato and modeled here for us by the lovely Character Doll No. 1 (Starsha). 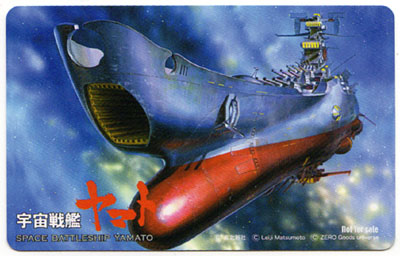 By all measures, Zero Goods Universe is a very classy operation, even including exclusive “collector’s card” artwork (shown at right) with each of their gorgeous character dolls. With such a commitment to quality, they should be around long after every “Matsumoto Girl” has passed through their capable hands.