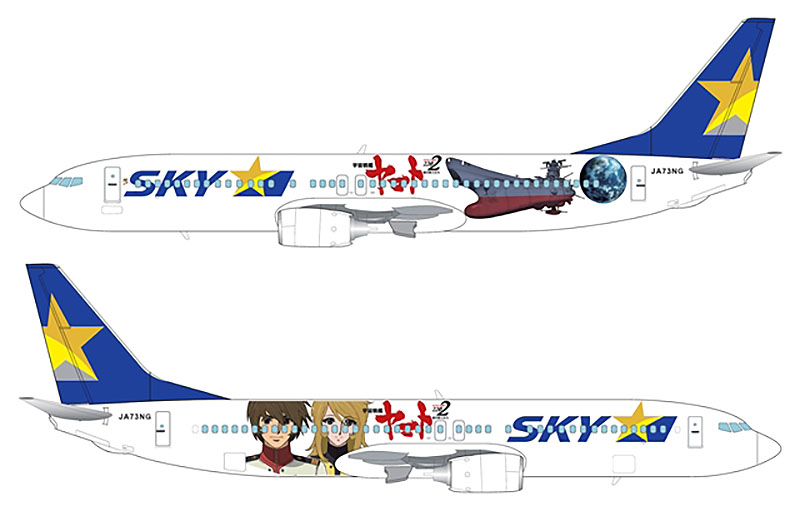 Space Battleship Yamato 2202, Soldiers of Love Chapter 1 opened on February 25. Various forms of promotion were carried out for the premiere, and fans were stunned by a collaboration with Skymark airlines. An airplane named “Yamato jet” has been outfitted with luxurious specs such as original wrapping and flight announcements by Yuki Mori (voiced by Houko Kuwashima). Here, we present a photo report from a session held for the media and interview the staff in charge of Skymark publicity, which revealed Yuki Mori’s inflight announcement!

Please enjoy every corner of the Yamato jet.

A design just right for “Soldiers of Love”

Only shareholders can enter the Skymark hangar. Reporters shouted “Whoah” and cheers broke out spontaneously at the sight of the Yamato jet in this big space. There is a concept behind the Yamato jet, and there is a story connection with Yamato 2202 to tickle the heart of all the fans.

Earth’s atmosphere was restored by the Cosmo Reverse System when Yamato returned from its mission in the year 2199. After the atmosphere was purified, air travel became possible again, and mobility of both cargo and passengers increased due to the reconstruction of Earth. With this, the Skymark-type airliner is operated by the newly-organized Global Atmosphere Transport Corps. With the Yamato jet, you can feel closer to the world of Space Battleship Yamato.

Let’s start with its appearance. A large Yamato illustration is placed on the left side. Since it surrounds a window, you can have the feeling that you’re on board Yamato by saluting through the window to the outside. Let yourself hum the theme song in the cabin: “Sarabaaaa…chikyu-yo…” and it will be sure to quicken your heart.

On the right side of the plane is a large illustration of Susumu Kodai and Yuki Mori. Between Kodai’s steady expression and Yuki’s gentle smile, they make a strong impression on that side. It is the heart-mark of the wing that deserves special attention here. On Skymark airliners, markings for heart and speed were originally applied to the wings. The aircraft that received the wrapping this time is one with a heart mark, which wonderfully matches the theme of Yamato 2202. 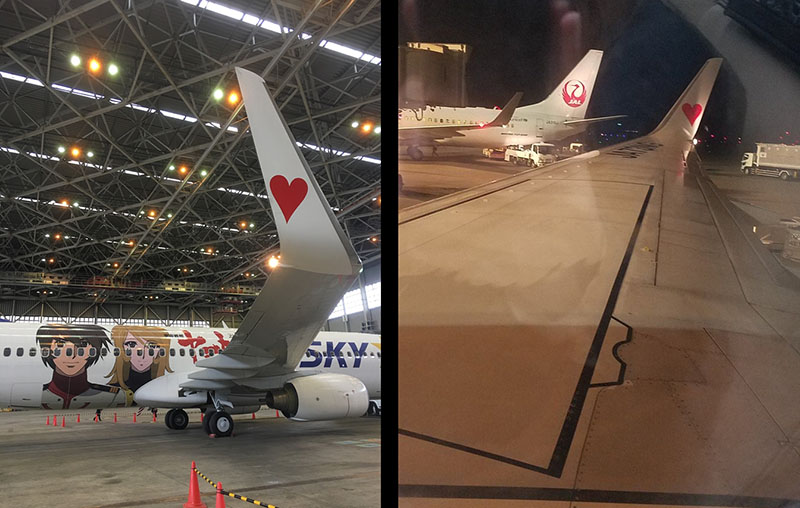 With these good omens overlapping, operation began on this day of coverage when some of the aircraft’s equipment was changed out. It seemed to imply the future launch of Yamato 2202.

When you step on board, there are also illustrations of Susumu Kodai and Yuki Mori at the entrance. You can see it is designed with careful attention to detail. And as you enter the cabin, your eyes are riveted to the sheets that line the rows of seating. Three types of illustrations are used on the headrest covers, all of which are impressive. They are of such quality that it seems wasteful to use them. 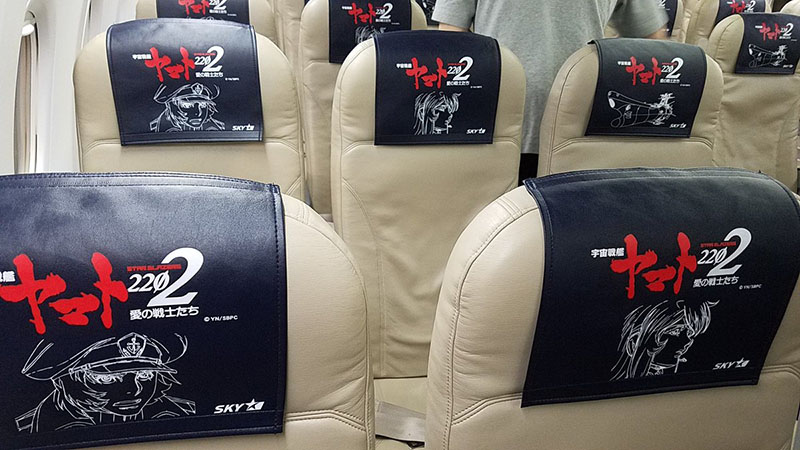 As mentioned earlier, announcements from Yuki Mori flow through the cabin, calling your attention to navigation. Of course, these announcements are recorded.

“Everyone, today you are on board the Skymark Yamato jet. Thank you very much. This is Yuki Mori of Space Battleship Yamato‘s shipping division.”

This also gives you the feeling of hearing a broadcast inside Yamato itself. This time, we bring you exclusive delivery of an excert from Yuki Mori’s announcement! Please enjoy her beautiful voice.

(Visit the original post here to play the sound clip.)

When you board the Yamato jet, please notice the details. The Yamato is planned to fly through the summer of 2018.

Thanks to everyone involved with Yamato! A Skymark representative talks about the collaboration!

How was this collaboration achieved? To find the answer, we interviewed Mr. Shinjiro Mizuno, deputy to the general manager of Skymark’s “I want to ride again!” promotional department.

Interviewer: Thanks for meeting us today. The name of the promotional office is an interesting one; “I want to ride again!”

Mizuno: That’s right. Originally, I did collaborations with other companies in the PR department, and in June of last year I established the “I want to ride again!” promotion room. 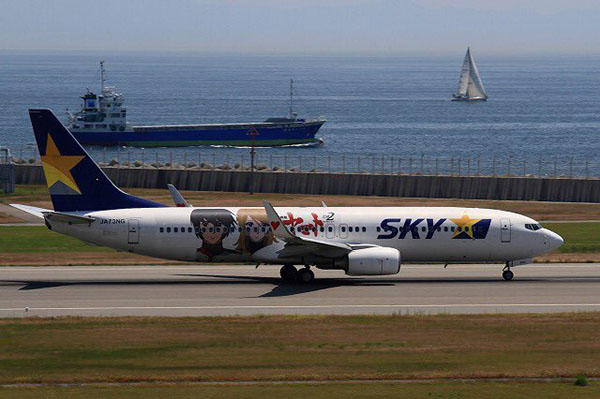 Interviewer: I see. The announcement of the Yamato jet got a big public response.

Mizuno: It seems so. I’m thankful for that.

Interviewer: How did the Yamato jet come to be?

Mizuno:Everyone knows that there is an airline called Skymark, but many people don’t know where we fly to. With collaborations like the Yamato jet, our goal in particular was to raise awareness of our routes. This collaboration started with consulation within the company, and we concluded that it was a good idea. I believe the Yamato jet gives us a change to gain more recognition among a wide range of customers.

Interviewer: Collaborations between airlines and anime have been active in recent years. How do you perceive it?

Mizuno: Actually, I didn’t know about much anime other than Evangelion, and I didn’t even know about Space Battleship Yamato until the collaboration was decided…

Interviewer: (Laughs) Unless you like anime and you’re in a particular generation, Yamato might be difficult to get into.

Mizuno: But I learned that’s wrong when I watched Yamato 2199 and the first Space Battleship Yamato.

Mizuno: It’s fascinating! (Everyone Laughs) I was so amazed that I went through the company thoroughly and said, “Don’t we have to do this!?” We also had a booth at the completion screening event on February 6, and we noticed there are a lot of really passionate Yamato fans. 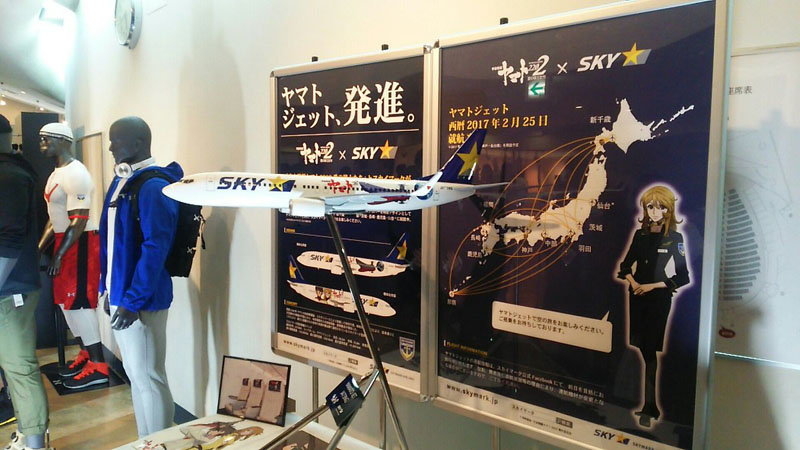 Interviewer:Fans are also pleased about a collaboration between Yamato and an airline.

Mizuno: I certainly feel the affinity for airplanes is high. For this collaboration I created a special clear file, adopting a design that compared the size of the Skymark airplane with Yamato and the Andromeda class. It’s meant to be a promotional product, but our airplane is depicted as the smallest. (Laughs) When I consulted with the company’s detail person, I was told “Fans will like this.” When you see the actual Yamato jet, I think you can feel the size of Yamato‘s scale. As expected, you understand the magnificent worldview of Space Battleship Yamato. 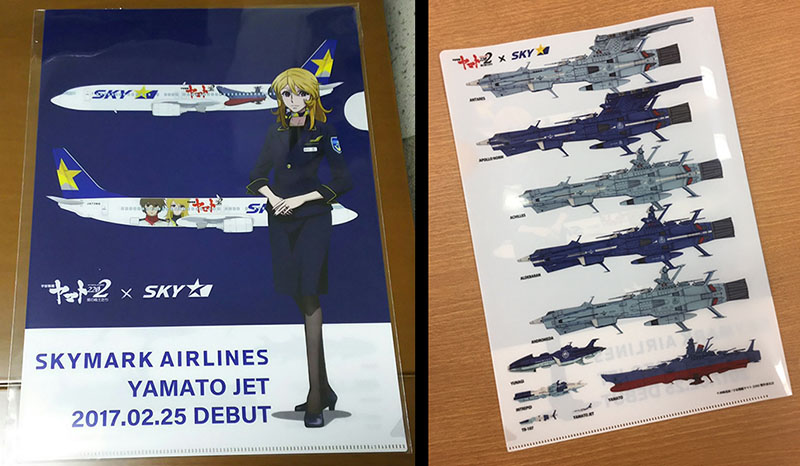 Interviewer: What is a particular point of design in the actual Yamato jet?

Mizuno: First, I absolutely wanted to put Yamato‘s hull on it since I thought this would resonate with young fans, and we placed Susumu Kodai and Yuki Mori on the opposite side. Due to the nature of the aircraft, there are limitations, but I tried to increase the size of the illustrations right up to the last minute.

Interviewer: How was the reaction inside the company?

Mizuno: There are a lot of employees, such as in the maintenance department, who like Space Battleship Yamato and I got a lot of opinions like, “How about this design?” When we made the clear file a little while ago, people who didn’t know about it seemed to think “It looks like a line of fish,” but I said, “No, no, this is good” and spoke passionately as I consulted other opinions.

Interviewer: I think the onboard announcements are also a wonderful element for the fans.

Mizuno: I thought we could do something with BGM, and we were allowed to use the theme song. After I saw Yuki Mori make an announcement in the work, I thought it was similar to our flight attendants, so I proposed it. We usually use the recorded voice of Symark employees, but I thought it would be interesting to have Yuki Mori making the announcements. It was just a suggestion when I submitted the proposal, but everyone involved in 2202 liked it. I also suggested getting an illustration of Yuki Mori in a flight attendant’s uniform, and they accepted. It was a new discovery for us. “We can do this?” 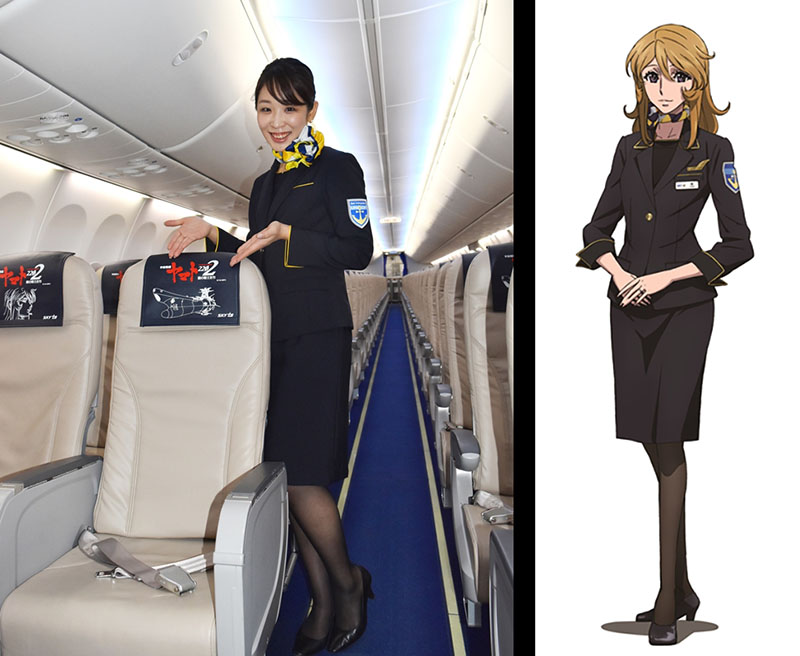 Interviewer: As a fan, it was exciting for me to hear Yuki Mori’s announcements. When I closed my eyes, I really had the sense of being on board Yamato…

Mizuno: That’s right. I think I’d like to take a ride soon.

Staff member: It’s not likely to come back here for about a year. (Everyone laughs)

Interviewer: By the way, what do you think is the appeal of an airplane?

Mizuno: The appeal of an airplane is that they are flown by a team. Yamato is also flown by a team, and each employee has a role on the plane. Each of them will be able to safely reach their destination by fulfilling their role. The Skymark employees do their jobs happily. 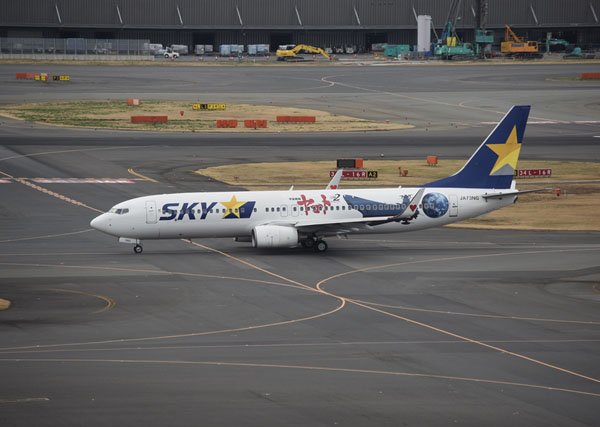 Interviewer: Please share your message to everyone who rides on the Yamato jet.

Mizuno: On the Yamato jet, I’d like you to taste the feeling of riding on Yamato. We’re planning various developments from here on, such as in-flight sales. This was my decision and I’m sorry that I can’t ride on it, but please enjoy the Yamato jet fully if you can get on board.

See many more pics of the jet in a photoblog here. 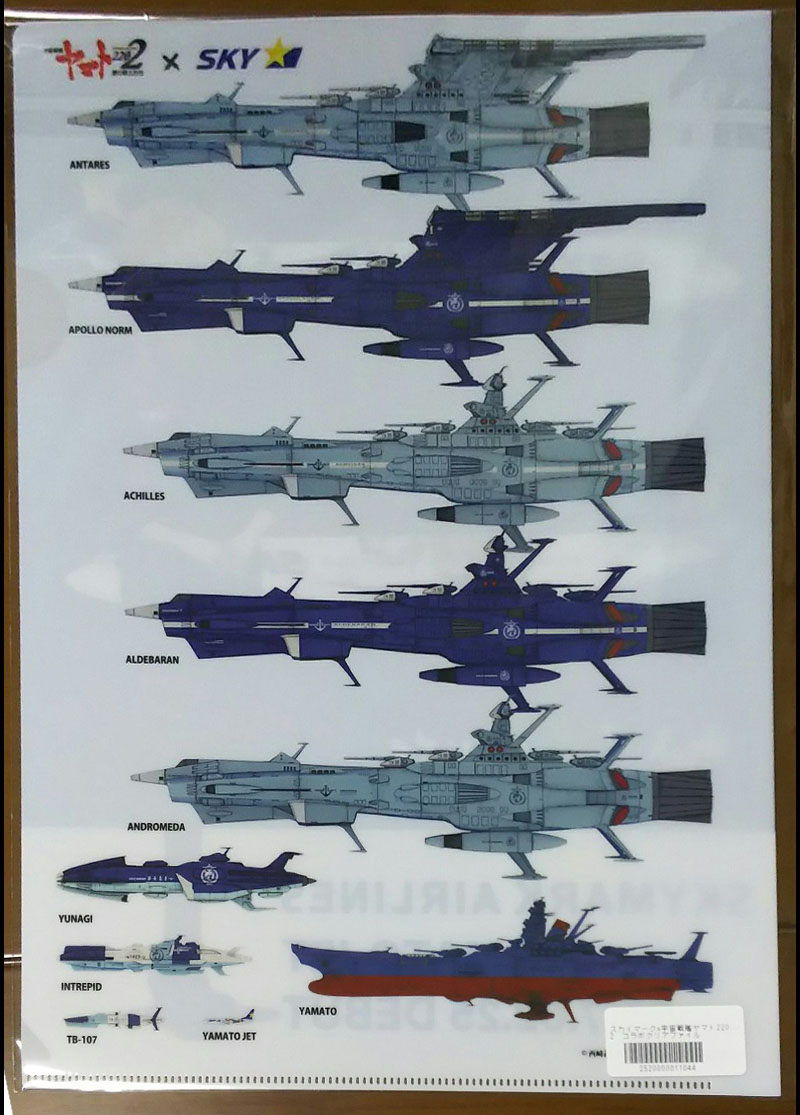