True anime mecha fans rejoice at the arrival of every issue of this quarterly magazine. Under the name Great Mechanics DX, they consistently gave us the highest-quality Yamato 2199 coverage (consult our 2199 media index to find it) and this cover art alone should make it evident that they’re fully on the case again.

The painting, incidentally, is by Naochika Morishita, who did a stunning 2199 painting for the cover of Great Mechanics DX issue 22. The article spanned 12 pages with an extended Nobuyoshi Habara interview and a conversation with the designers of the 1/1000 Andromeda model. The complete Habara interview is presented here. 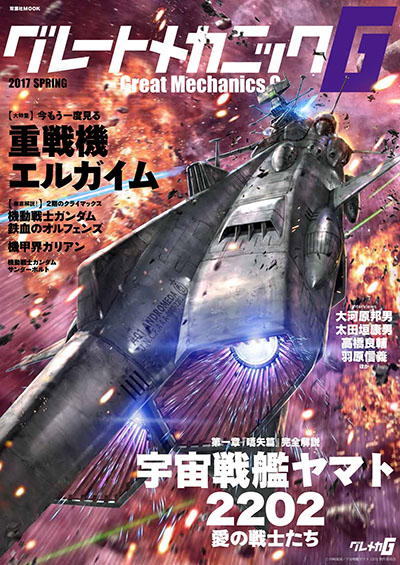 Last issue, writer Harutoshi Fukui examined the concept of Space Battleship Yamato 2202, Soldiers of Love. At last, it was shown in theaters, but it was only the first of seven chapters, a fascinating work that gave us a glimpse of future direction while paying respect to the originals, Farewell to Yamato and Yamato 2. This time, we welcome Director Nobuyoshi Habara to discuss Chapter 1, Launch Chapter. The interviewer is Sergeant Yamazaki, himself a big fan of Farewell. Anchors aweigh!!

Yamato 2202 has finally begun. Yamato was revived again by Yamato 2199 in 2012, and production of 2202 began while the iron was still hot. There was a lot of participation in 2199 by the “First Yamato Generation,” including Director Yutaka Izubuchi.

As you know, 2202 is a remake of both Farewell to Yamato and Yamato 2. This time, it is made by the Farewell Generation, writer Harutoshi Fukui and Director Nobuyoshi Habara. Those who didn’t see it in real time may not fully understand, but feelings for Yamato are different between the Yamato Generation and the Farewell Generation. The time lag was only 3-4 years, but when you were either an elementary student or a junior high student at that time, it could be said that three or four years gave you a very different feeling when you had the sense of growing up into an adult.

It has often been said that Space Battleship Yamato was the herald of the anime boom when it began in 1974, but it was the second feature film Farewell that vividly showed the power of the anime boom when it was released in 1978. It drew an audience of more than 4 million people, far more than the compilation movies for the Mobile Suit Gundam TV Series, which may be easy to understand. Not only boys liked SF cartoons. It was a work that many men were passionate about from elementary school through the upper grades.

In other words, it is not an exaggeration to say that the remake of Farewell is a national work, and since 2202 is also a sequel to 2199, which was a modern update of Yamato, it gives us a glimpse of many different goals. Reviving a past work means making it convincing to people with a wide variety of ideas, so there are many challenges to face. 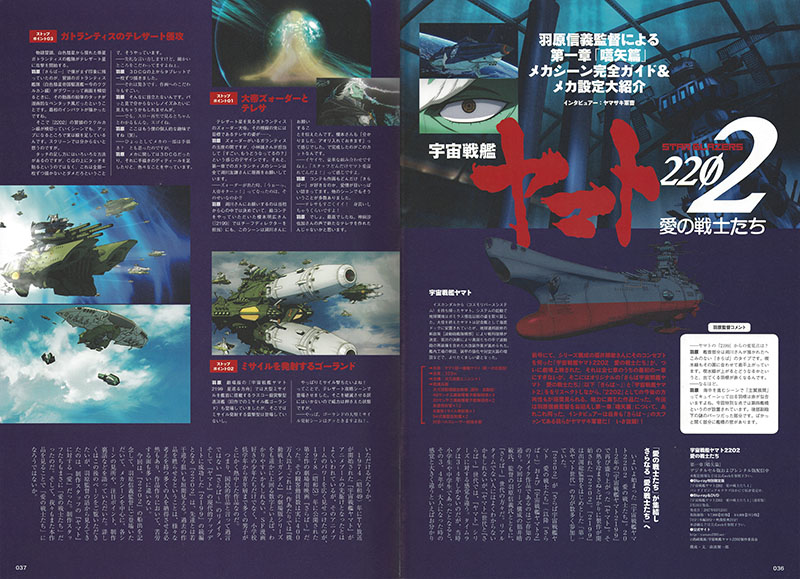 I thought we could show the mecha slowly

Interviewer: Are you a member of the Farewell Generation rather than the first Yamato?

Habara: I saw the first one, of course, but the Farewell Generation is still the first generation.

Interviewer: After your generation saw Space Battleship Yamato on TV, was the pattern then go on to Japan Sinks?

Habara: Of course! There was a show called Monkey Army on another channel, but I pursuaded my younger brother to see Yamato instead.

Interviewer: That was the time before home video, so there were always fights over the channel, weren’t there? Did you decide on particular policies when you were chosen to direct this time?

Habara: I was also involved in 2199, and when I put in elements that reflected my points too much, they were all longer mecha scenes that got cut short. Therefore, I cut down the dialogue as much as possible in 2202 so we could thoroughly show the mecha. I wanted it to look as heavy as possible.

I think there are places where it becomes incomprehensible if too many lines are cut, so please enjoy it with the script that comes with the limited edition blu-ray, by all means.

Interviewer: Leaving aside mysteries and speculative questions, it was very clear and there were no parts that I didn’t understand. Basically, there are no major changes from the original work, but conversely, “It would be great if you could change that part!” There are some points I didn’t want removed, and I’m glad that they were properly left in.

Habara: Thank you very much! The feelings of such fans are very important to me.

Interviewer: The precious treasures of childhood are the most important things to the geezer generation. (Laughs) In short, it’s not easy to change the really important parts, so I’d like to see you do an update on top of that without doing unnecessary things! I’ll be satisfied if I can feel “This is a proper remake.” So 2202 is exactly what I expected.

Habara: I’m glad you can say so. Not everything has to be modernized. I think it’s necessary to say “How much do you love the original?” and burn it properly into the film. I don’t think it should be taken too seriously as a real thing, and it’s also not good to make it too much like your own hobby. The degree of compromise is very difficult. 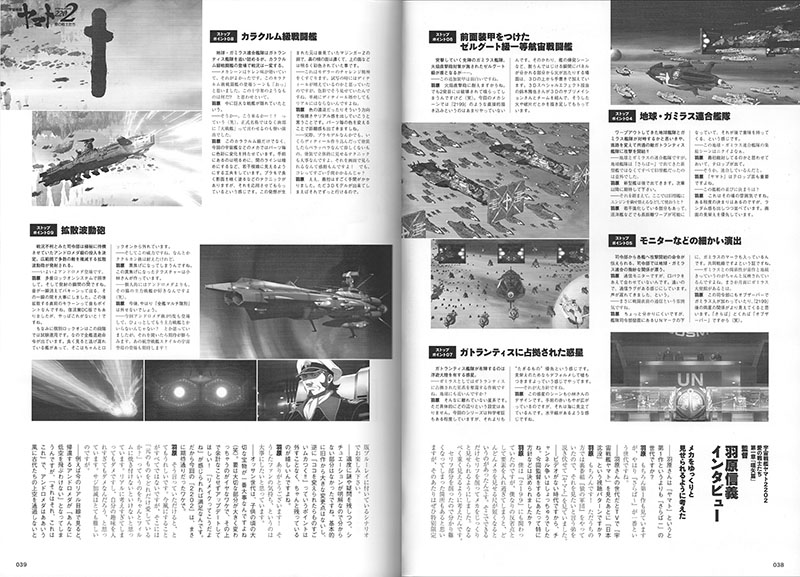 Interviewer: For example, if you look realistically at Andromeda now, you think, “It’s impossible to fly it at low altitude, but Andromeda HAS to pass over Kodai and the others in the sky, so it’s like, “Do that, do that!” So it’s no use being realistic. By the way, where did the title Launch Chapter come from?

Habara: It’s actually from my eldest son. That’s the title he suggested when I was thinking about various titles. He majored in Chinese literature, so he knows a lot of such words.

Interviewer: It’s hard to read. [Translator’s note: the word for “launch” in this case uses an obscure kanji character.]

Habara: There were some dissenting opinions on that point in a meeting, but Harutoshi Fukui agreed to it, so we decided to add the furigana [phonetic characters].

Interviewer: Conversely, it’s an unforgettable title once you learn it. It’s easy to talk only about Farewell to Yamato since we’re of that generation, but this can also be considered a remake of the 26-episode TV series Yamato 2. What do you think about in this area?

Habara: I think that wistful feeling you see in Farewell and Yamato 2 is something I want to go for. I was at an event the other day with Sayaka Kanda as Teresa and Kenichi Suzumura as Daisuke Shima, and Mr. Suzumura asked, “What will happen between Shima and Teresa?”

Interviewer: It’s a place of great interest, after all. (Laughs) 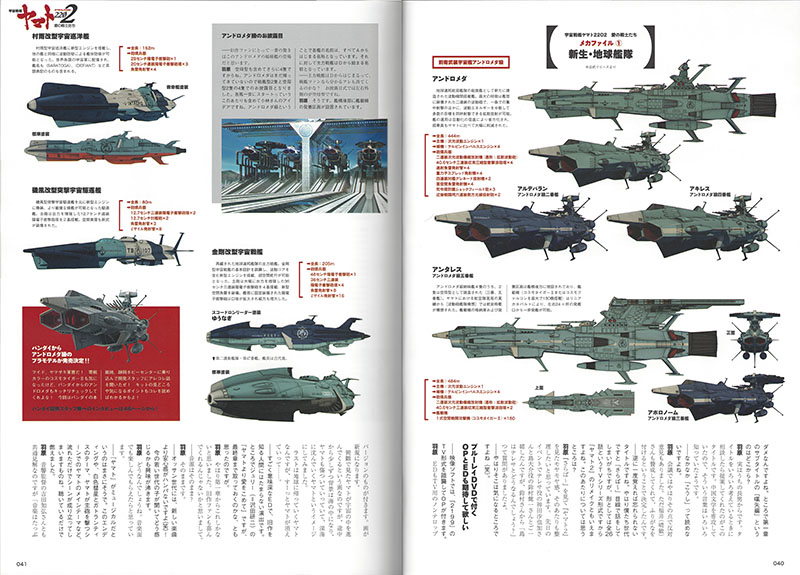 [Translator’s note: OP and ED are shorthand for opening and ending title sequences.]

Interviewer: The home video follows the 2199 television format with an opening title.

Habara: The OP and ED both come with non-credit versions. It’s all new. The image is from Yamato‘s POV flying into space. The background gradually becomes the sea, and also Yamato gets damaged. I had the image of Yamato sinking into the deep sea. In the end, Yamato returns to Earth, and then disappears…

Interviewer: It’s a very meaningful ED, and very significant for those who know the old work. By the way, I wondered whether or not you would save Kenji Sawada’s From Yamato With Love for the final chapter.

Habara: I thought it could only be on Chapter 1. I think it will make the older fans happy.

Interviewer: Is it from the original source?

Interviewer: No one is more insecure about the new music more than the geezer generation! (Laughs) I’m interested in how the kids in the younger generation will feel when they hear it.

Habara: I wonder. I hope everyone will like the music as well.

Interviewer: Yamato is musical, indeed. There’s the ending, the theme of the White Comet and Gatlantis, and Yamato‘s main theme just happens to flow into the scene where Yamato fires the main guns. I burned just listening to it.

Habara: You have the same opinion as the sound director, Tomohiro Yoshida. His policy is, “Let’s put in lots of music.” I was glad that it worked.

Habara: It’s performed by a brass band with visuals from Chapter 1 combined with new scenes. It starts with the red Earth turning into a blue Earth from the Cosmo Reverse System. 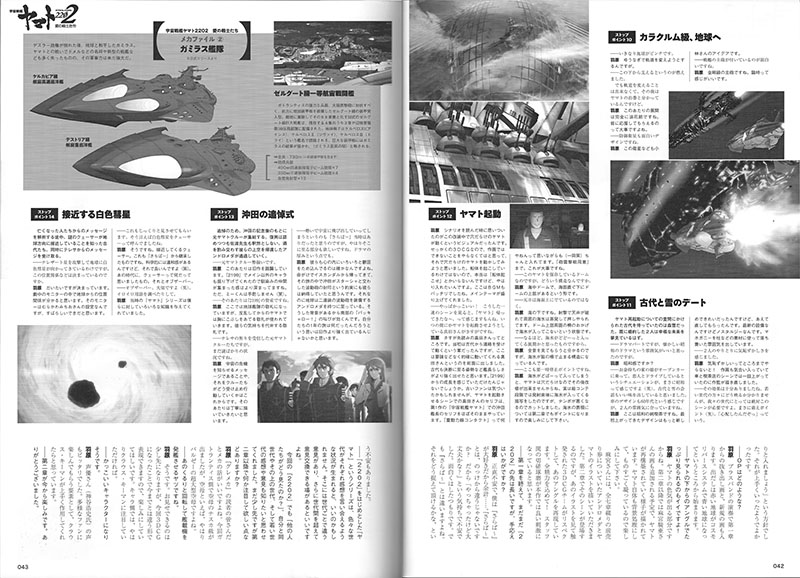 Interviewer: It’s good to see plenty of angles from beneath Yamato!

Habara: That’s where Yamato‘s sex appeal comes out. Visuals by Kia Asamiya will be added with Chapter 2, depicting Yamato in a state of being rebuilt. Yamato itself is going through a lot of background processing, so please look forward to it.

Mr. Asamiya drew the illustration of Yamato and Andromeda that came with the advance tickets for all seven chapters. The scene itself appears in Chapter 2, and the 3DCG team was inspired by seeing that illustration, so they reproduced that angle. It’s full of energy! I think a friendly competition between the staff is a good stimulus in this project.

Interviewer: After the first chapter, 2202 still has a long road ahead of it. How is the response?

Habara: To be honest, I’m anxious about it because I love Farewell…is it too different from Farewell at the beginning? So I have the uneasy feeling of, “I went through with it, but is it all right?” but I intend to still have fun with it. I was just worried about how it would be received.

Interviewer: With all the Yamato series, including 2202, it may be good for the situation to arise where various generations can exchange their impressions and opinions. There are different opinions from one generation to the next, and there should also be places where they can exchange views that go beyond generations.

Even with 2202, I wondered, “How do other people see this?” and it made me want to know the opinions and impressions of the younger generation. It’s still a little ways off, but are there some points you want us to pay attention to in Chapter 2?

Habara: Readers of Great Mechanics want to know about the mecha, right? The Nazca-class carrier will appear on the Gatlantis side this time, and speaking of carriers, there is still the ultra-large carrier of Baruze.

Interviewer: That’s the one that rotates to launch its aircraft, right?

Habara: That’s right. It will be a little while before I can show you, but it can be expressed in a different form when it becomes 3DCG, so I want you to look forward to it. On the character side, you should also pay attention to Klaus Keyman.

Interviewer: He seems to be a cool character.

Habara: The voice of Hiroshi Kamiya is perfect. I think Klaus Keyman will work out well as an element to be enjoyed by a variety of fans. 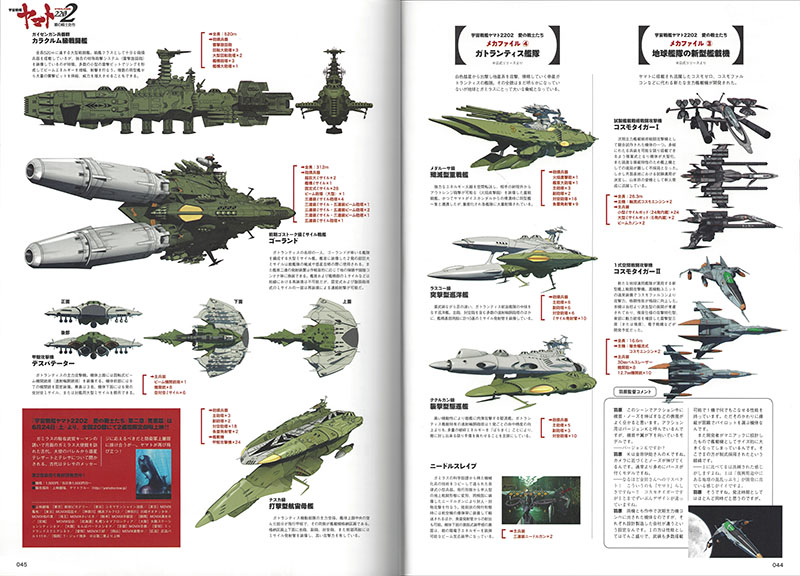