Some may be surprised to learn that despite being an imported program, Star Blazers has some unique music of its own, all of which can be heard in the space of a few seconds, but is interesting to examine nonetheless. 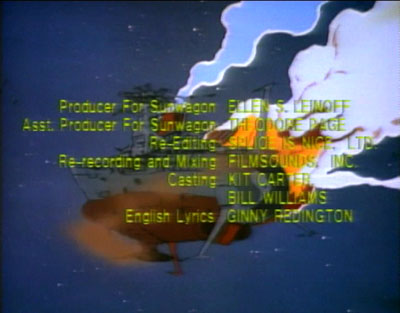 First and foremost is the one aspect of the show that outshines everything else: the songs. Story details, character names, the basics of the plot, those can (and do) slip out of memory over time. More than one person who watched the show in their youth now remember the Argo as a submarine, just to give one example. But start singing those opening lyrics, “We’re off to outer space…” and the song comes flooding back. The lion’s share of the credit goes, of course, to composer Hiroshi Miyagawa, but someone had to make the English lyrics memorable, and that person’s name is Ginny Reddington.

Naturally, her music career was much bigger than writing the lyrics to Star Blazers would imply. She was best known as a writer/composer of music for advertising. Her husband, rock musician/producer Thomas Dawes, was in this game as well—his biggest claim to fame being the “Plop, plop, fizz, fizz” jingle for Alka-Seltzer. Together, they created the “Coke is it” campaign and a critically-acclaimed Broadway musical called Talk of the Town in 2004. Dawes died in 2007, and Ms. Reddington’s status is currently unknown (but we certainly hopes she contacts us if she happens to be reading these words).

Few suspected Star Blazers had a creative link to Coke and Alka-Seltzer, but everything in the universe is connected somehow.

Searching for a distant star
Heading off to Iscandar
Leaving all we love behind
Who knows what danger we’ll find?

A cry for help, a desperate plight
Makes our Star Force reunite
As we rush and heed our fate
The Comet Empire awaits

This was actually the second time the original theme had been rewritten with English lyrics. Check out the first version here.

There are exactly two episodes of Star Blazers that contain wholly original music NOT created in Japan. The first is episode 10 of series 1, the hyper-emotional “Goodbye to Earth” episode. Anyone who thinks they haven’t heard the original Japanese closing theme, The Scarlet Scarf, actually has; as the most heart-rending of all Yamato songs, it pops up repeatedly in this show. One interesting moment is when Wildstar is alone on the bridge, whistling it to himself prior to being interrupted by IQ-9. The whistling is directly from the original Japanese soundtrack, the singular case where a Japanese voice is left in the show.

Though that isn’t an example of original Star Blazers music, this next one is. A little while later, Wildstar is hanging out in the galley watching the activity. On the other side of the room, Captain Avatar is pestering the chef, Mel “Slops” Mulligan, who complains that he can’t get any work done with all the interruptions. 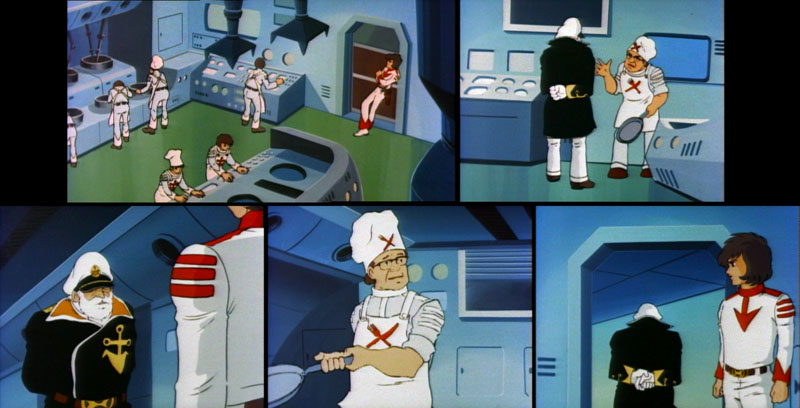 Avatar turns to leave and notices Wildstar loitering in the doorway. Wildstar explains that he’s just “checking” on things, and Avatar comments “That makes two of us” before he walks away. Listen carefully right after that line: the atonal music bridge to the next scene is NOT a Miyagawa score; it inexplicably replaces one from the original soundtrack. 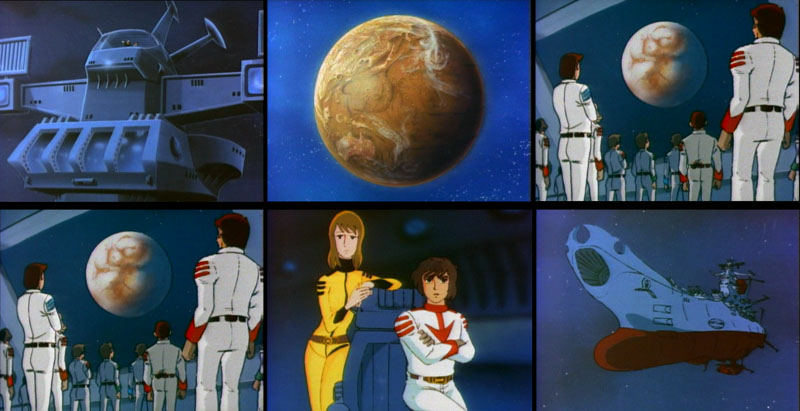 There is another interesting musical anomaly near the end of this episode as the camera pulls out from the bridge tower while Avatar & Wildstar shout, “We will return!” In the original version, we hear Isao Sasaki sing The Scarlet Scarf, which is an absolutely perfect fit. In Star Blazers, the music is heard karaoke-style without the vocal track. In its place is a “hummed” version by the same men’s chorus that performed the opening and closing songs. They conclude with the lyrics “We will return again…we will return” sung to the Scarlet Scarf chorus melody.

Now we jump forward to Series 2 episode 15, which includes the party scene on the Comet Empire. Princess Invidia taunts poor General Talan about Desslok’s imprisonment, and Prince Zordar announces that after the conquest of Earth, they’ll all really have something to celebrate. Meanwhile, stiff-limbed wenches groove to a funky techno-beat that would probably be classified today as House Music. 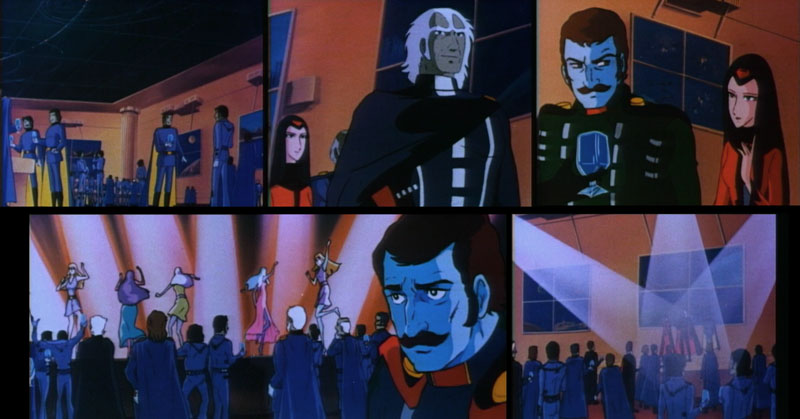 As it turns out, the techno-beat is entirely American-made. The original soundtrack had a thin, unidentifiable background score that was so buried in echo that it can barely be heard. Someone on the US production staff obviously believed this needed a boost, and their decision lent an interesting new texture to the otherwise bland lifestyle of the Comet Empire City.

This was one of just three examples of source music in the series. Another was the aboriginal jungle-beat of the Bee People music in Series 1. This has never appeared on any Yamato album, giving rise to the suspicion that it was sampled from an outside source under different copyright. The third example definitely was, a folk tune called Northern Nocturne heard in Homer’s visit to snowy Okinawa in the holography room.

There is one more oddity to be found in the Star Blazers soundtrack, and even today it still takes longtime fans by surprise. It is the sound of the Wave-Motion Gun, which is different in Star Blazers than it was in Yamato.

An extra layer, almost certainly a human voice, has been added to the sound to give it someone must have thought would be a little more punch. Whether or not they guessed correctly is a matter of personal opinion, but it’s just one of many things that gives Star Blazers its own personality. 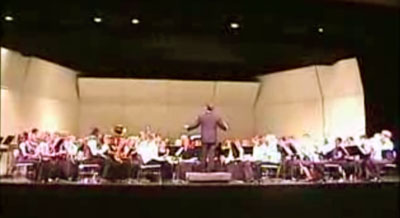 This last story is a bit of a tangent, but one that provides another American twist to Yamato music. On May 19, 2008, the Space Battleship Yamato theme got its very first known live performance on American soil when it was played by the band at Port Angeles High School in Washington.
The sheet music was procured by superfans Ed Hawkins and Don Gaiser. Don attended the performance in person and recorded it for all time. Click here to see what will hopefully be remembered as the first stop on Yamato‘s US concert tour.

13 thoughts on “The Music of Star Blazers”