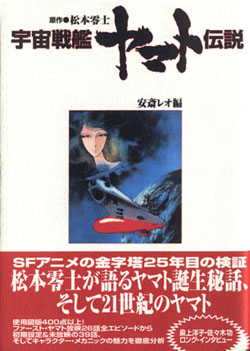 In 1999, Bandai Visual’s Footwork imprint published this book by Leo Anzai, titled the Space Battleship Yamato Legacy. Its 248 pages covered the first TV series and its attendant phenomenea in great detail, ending with an insightful interview with the one and only Mr. Isao Sasaki. In it, the legendary “Voice of Yamato” shared his privileged viewpoint of the experience. It is presented here for the first time in English.

Voice actor and singer–these are the two faces of all around nice guy, Mr. Isao Sasaki. He sang many of the best songs for Space Battleship Yamato, and also did the voice for Hajime Saito [Sergeant Knox] in Farewell to Yamato and Yamato 2. And nobody else can sing the The Scarlet Scarf like he can. Currently working as an actor and TV celebrity, we asked Mr. Sasaki about that time…

You debuted as a singer, then eventually became a voice actor for Gatchaman [Battle of the Planets]. Would you please tell us more about how this came about?

While I was singing, I was also acting in various venues, including the movies. When I was nearly 20, the Agatha Christie play And Then There Were None was playing at the Yomiuri Hall. The stage director at the time was Mr. Mizumoto. After I was working in acting for a while, Mr. Mizumoto (by then he was a dubbing director for foreign movies) remembered me and asked, “Hey, Sasaki…aren’t you called the Japanese Elvis? Would you care to be the voice of Elvis in the movies?” And that’s how I became the voice actor for an Elvis Presley movie. It was the first time I had done anything like that, but word got around and before I knew it, I had several voice-acting jobs waiting for me.

While I was doing this, Mr. Mizumoto calls me up and says, “We’re gonna be doing Gatchaman,” and he goes on about how they were working with this other fellow, and asked if I was interested in this type of job. At the time I was just starting out, so I quickly replied, “I’ll do it! I’ll do it!” When I went to the audition, they had me play the part of Ken. But my voice didn’t match what they had in mind, so I figured it was all over. Then they had me try out for the part of Joe… [Which he got]

After doing Gatchaman for a while, the company calls me up and says, “You mind doing a song for a new project called Casshern?”

So, once you sang for Gatchaman, you ended up singing elsewhere, too?

Gatchaman ran for about 2 years. Because the ratings were good, they had a party. One of the guys there said, “Hey, Sasaki. Aren’t you a singer?” And that’s how I got my break as an anime singer.

In the ’70’s, the songs were separated into groups. Kids’ songs on one side, and the adults in the other.

Yes, each genre stayed pretty much in their own group. Folk in folk songs, rock in rock songs. Even anime had its own group.

And isn’t that how you got to sing the hit song Space Battleship Yamato and Kenji Sawada sang From Yamato with Love?

Those songs really fit in with the times, yes? But for me, I truly believe The Scarlet Scarf was the one that really struck home with anime fans.

That’s true. Speaking of which, even though the music of Yamato was epoch-making in its scope, when it came to singing the main song, were there ever any differences in opinion between Producer Nishizaki and Leiji Matsumoto? 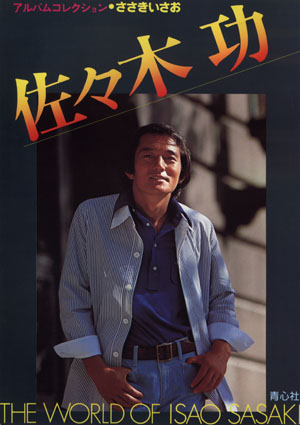 After Yamato became a hit movie, and everybody wanted to see it, what were your feelings at the time?

After my debut, there was a period when jobs were scarce. And when I was called back to work, I was truly happy. The numerous fans enlightened me that there was this genre, and I felt like I made it!

I’m from the Kansai area, and back in ’77, you came to the Takarazuka Family Land to sing. I got there in the morning, and when you got to the part of the theme that went, “We cheerfully answer the people waving their hands,” I waved to you. And then you waved back, so I figured I must have gotten your attention.

And when I decided to get your autograph, I found there was an enormous crowd of people where you were, and I couldn’t get through.

I must admit that surprised me, too. I had figured anime was just for kids, but I found myself entertaining people of all ages, including a whole lot of girl students. Mothers and fathers who knew me from way back brought their kids, a second generation of fans. Then, I thought, “I’m still popular with the young people.”

The two projects you were involved with, Gatchaman and Yamato—can they be described as an early version of the anime subculture?

I was just lucky to have been involved with the two big anime projects of their day. If the Producer had gone down a different path, I wouldn’t have sang for Yamato, and if they had chosen a different voice actor for Gatchaman, then I wouldn’t have been doing that. Kind of funny how luck was with me then. Lately, I’ve been saying that if Mr. Mizumoto hadn’t used my voice for Gatchaman, then I definitely wouldn’t be where I am today.

My kids liked the first Yamato best. They liked the way Matsumoto-sensei added his touch to the “distorted” quality of the artwork. By the time Farewell came along, the artwork became more systematic, and that wasn’t so amusing.

On stage at the Festival in Budokan, summer 1980.

The first Yamato really focused on the mecha. I was surprised at how the ship shook when the main cannons fired. All that was drawn in great detail.

Matsumoto-sensei really loves his ships and warships—to the point that he actually goes to see them himself. He was able to capture the distortions caused in the field of vision as well. From the second Yamato, these attributes were ignored, and it was more like your typical love story. And when Gatchaman 2 came out, it was like, “Ok, we’re gonna do another Yamato 2 now!”

You played the role of Hajime Saito [Sergeant Knox] in Farewell? 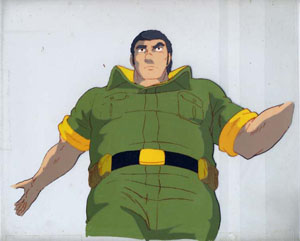 I’m sure it was a complimentary role, just to boost the marketing. “This time Sasaki’s gonna be a voice actor in the movie…” and so on. I’m sure they picked me because I was constantly working at Tohoku Shinsha Studio. But I just couldn’t get into the Saito role because it wasn’t my character type.

You’ve played a lot of roles, like Joe of Gatchaman, Starbuck of Battlestar Galactica, and the cool hero, Michael Knight, of Knight Rider. Even macho men like Stallone. Considering that, the Saito role just wasn’t you, was it? It seemed like you forced your voice to be deeper.

Yeah, I was pushing it (laughs). I could get the feel for most of the characters I played, but not Saito. That’s why I forced it.

Yeah. We had discussed that he would get shot to death. After all, it’s the battle of Japan’s samurai spirit.

Everybody dies at the end of Farewell. I heard Matsumoto-sensei didn’t participate in the recording of those scenes because of this. But new versions of Yamato kept coming out, and it seemed you kept participating in those events.

I had little say in the matter. There were tremendous expectations that it would always be better than the previous production, and we had to participate in the promotion, especially since I sang the main themes.

I really liked the theme for The New Voyage.

It’s one of my favorites, too. That’s why I always sang it during the promotional campaigns.

You did both singing and voice-acting. Have you ever thought of just doing one or the other?

When I’m doing voice-acting, I get to learn from the foreign actors, especially if they’re good at their profession. It’s difficult for songs, as I have to listen to the arrangements and find the right way to sing based upon the lyrics. Basically, it’s a totally different profession.

I’ve probably sung too much over the years. And the times have changed along with the type of songs, so I feel that my style is no longer in fashion.

Also when Columbia Records first released the Gatchaman album, you did the lyrics and compositions. According to the liner notes, it says that during the songs “Let’s Walk Down This Street” and “Farewell, My Friend” you were in tears of passion.

I can’t go around with tears flowing in my profession! (Laughs) I’m sure they exaggerate a bit when writing the liner notes. I liked the Joe and Ken characters, so I wrote those two songs. I still like those songs.

Did you do anime voice-acting first, then move to dubbing foreign shows?

No, actually I started out dubbing foreign shows, as I wasn’t involved in much anime at the time.

So was Knight Rider your longest regular series?

Yes. I met the guy who plays Knight Rider, David Hasselhoff, at the Amsterdam airport, when I was flying to Italy. My wife said, “It’s him!” He was talking on the phone. When he finished, I introduced myself and said I did the Japanese voice for the show. And he said, “Oh really?” That guy was so big! Then he asked me, “Are you doing Baywatch, too?” And I said no. We had some small talk like that.

Finally, I’d like to ask you to share any special memories you have of the Yamato boom years, since I’m sure you traveled all over Japan as a result.

Hmm…it must have been the promotion we had in the Marui building in Hokkaido. There were so many people. I must have signed several hundred autographs that time. Actually, Yamato‘s popularity began in Hokkaido [site of the first TV rerun]. Then I started going on the concert tours. During that time, I recall that I did a lot of drinking.

Not at all (laughs)! Thank you for taking the time to talk with us!

Includes English versions of Yamato Theme and The Scarlet Scarf

Includes From Yamato With Love, Love Until That Day, English versions of Yamato Theme and The Scarlet Scarf

Sasaki on the Web: