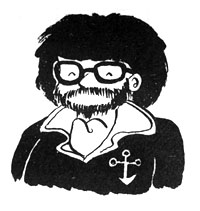 Originally printed in the fanzine Yamato, 1975

Nakatani: The most-asked question is, who invented the mechanism of the Wave-Motion Gun?

Ishiguro: It came from Iscandar. Not the actual gun, just the principle of it. We never actually said who built it, but I knew it had to be one of our main characters. I thought it was Tokugawa [Orion].

Nakatani: By what means?

Mr. Matsumoto wanted to make more of that, the passing of the baton, but next to the ship’s crew, the construction crew only made a very small impression. Certainly Sanada or Tokugawa would have come from that division, but doing more with that would have been beside the point.

Nakatani: How were they able to remodel the entire ship in only three days?

Ishiguro: Yeah, that’s a good question. It’s a big contradiction, isn’t it? I guess they were very good at it. (Laughs)

Nakatani: According to what we’ve heard, the idea of the bow gun came from Studio Nue. It would work the same as the output of an engine developed on Earth, so it would be easy to retrofit.

Ishiguro: Hmm, it uses the basic principle of a tachyon engine, even though that never came out on-screen. We called it a faster-than-light-engine, but the formal name would be tachyon engine. We first referred to the gun as the Tachyon Wave Gun, but ‘Tachyon’ was deleted in the recording sessions. We all knew what it was, but we didn’t think the term would be familiar to everyone. We were more concerned with the design.

(Editor’s note: the original name was Hado-Ho, which translates literally to Wave Cannon. It was named the Wave-Motion Gun in Star Blazers.)

Basically all of this, the use of tachyons and such, was the idea of Mr. Aritsune Toyota. It probably also came from Mr. Matsumoto. He was always talking about things that confused other people. (laughter)

Nakatani: According to one story, Mr. Matsumoto consulted a professor somewhere to work out the Wave-Gun theory, and determine how Yamato would fly.

Ishiguro: I think his older brother is a university associate professor or a lecturer in physics, so your story might be correct.

(Editor’s note: a long discussion follows about tachyons, faster-than-light travel, and the theory of relativity. We’ll skip ahead to more talk about Yamato…)

Nakatani: At which point was it decided to reduce the episode count?

Nakatani: There were a lot of things happening around that time.

Ishiguro: The production schedule needs a lead-time of about two months, otherwise we can’t finish an episode in time to air. If the series was supposed to finish at the end of March, the decision must be made by the end of the year, because the story has to be determined a month before that point.

Nakatani: Who decided on what the final episode would be?

Ishiguro: It wasn’t really one person’s decision, but it was Eiichi Yamamoto’s idea to revive Yuki.

Nakatani: Why did the others agree to such an idea?

Ishiguro: Well, it’s a strange one from a strictly logical point of view. A person’s brain cells die a short time after the body dies, so she should never have been able to revive. So the end becomes very religious and philosophical. It’s hard to express that in animation. It would be different if that had been our main theme, but bringing it in at the end is rather sudden. I don’t like stories like that very much. (Laughs)

Also, I wish we could have elaborated more on the death of Dessler, but we didn’t have time. 26 episodes were too few. Finishing him off with an explosion was just too simple. We could have said his ship was about to warp when it was hit, and as a result it gets caught between dimensions. We could have killed him off in a much more special way, but it was too late.

Nakatani: The beam from the Dessler cannon moves pretty slowly.

Ishiguro: The animators did a sloppy job. (Laughs)

Ishiguro: To tell you the truth, no animation studio was available to do episode 26, so we had a very hard time with it. Whenever a series is running down, a studio will start on a new one, so at that time all our regular animation studios were moving on. With episode 26 we wrestled with the story over and over, and the script got behind schedule. It needed to be finished in early January, but the whole month went by and it didn’t get done until February.

We didn’t have a finished storyboard until the beginning of March, and that’s when the animation began. It was supposed to air at the end of March, so there was less than a month to do everything, including the recording. Usually we took about three months to do a complete episode, but this time we had only three weeks, and all our animation studios were unavailable.

Eventually, we handed out scenes to all the animation directors, and somehow we made it.

Nakatani: I notice that the Captain’s quarters became smaller in that episode.

Nakatani: It was small to begin with, but in the last episode it seemed to be filled up by just one bed!

Read a 1977 interview with Ishiguro here