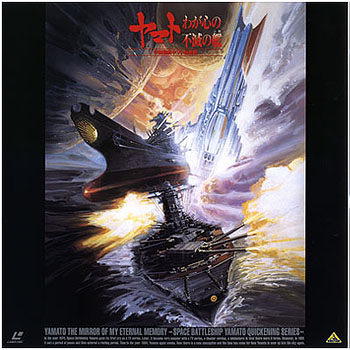 Very little news has crept out of Japan since the announcement in August 2008 that Yoshinobu Nishizaki had finally begun serious production on Yamato Resurrection for release in 2009. (Read our first report on that here.) Other than a short teaser trailer from his Enagio office, a very tight lid has been kept on the production. But that lid wasn’t quite as stubborn back in 1994 when the idea was first announced.

It was a promising year for Yamato fans, heralded by the video release of a documentary titled The Quickening. It was both a retrospective on the Yamato saga and a showcase for two new projects: Yamato 2520 and Yamato Resurrection. Both had emerged out of a ten-year struggle to find a story that would push Yamato into the future without being overly reliant on conventions of the past. (Read about it in detail here.) Yamato 2520 was much farther along by that point, already commencing production when The Quickening was released in February ’94. Word had it that Resurrection was hot on its heels.

14 years of checkered history since then have told the truth. 2520 fell short of its goals and was discontinued after its third episode. Resurrection never got out of preproduction and appeared to be off the table for good. Which was a real shame, because of the two projects, Resurrection seemed to hold the most promise. We can only guess how history might have been altered had it left the starting gate first.

Putting aside hypotheticals, there is still plenty to gain from looking back at the original presentation. The creative team has almost completely changed for the new film, but many of the core concepts might still be intact—in which case this material could still serve as a preview of what is to come.

With no way to stop the coming storm, the people of Earth are now abandoning their homeworld en masse. As the human family spreads out into far-flung colonies, their identity as a race begins to deteriorate. All this should sound very familiar to readers of Star Blazers Rebirth, which was after all based on the material shown here. But there are still plenty of surprises in store…

Executive Producer Yoshinobu Nishizaki leads a story meeting for Resurrection in 1993. He is surrounded in this scene by some of the top anime talent of the time and two important veterans of the early days: writer Aritsune Toyota (A) who was a key figure from the very beginning of the Yamato saga 20 years earlier, and Takeshi Kitano (B) who joined the staff in 1978 and served as an animation director through 1983. We’ll meet the others below.

At left is Animation Director Hideki Takayama, who had begun his anime career with Captain Future in the 1970s and first worked for Nishizaki on Uratsukidoji (Legend of the Overfiend). A list of his other credits can be found here. At right is Conceptual Advisor Daisuke Yajima, who may or may not be the same individual profiled here. Neither of these gentlemen had produced work that could be showcased in the documentary, but it was a different story for the designers at the table.

The first order of business would be to figure out a way to recover and rebuild the pieces of Yamato from the frozen iceberg of the Aquarius flood.

An approach for this was envisioned by Tsuji Tadanao, who painted the introductory scenes above and previously served as a concept artist on Final Yamato. His work can be seen in our Final Yamato gallery on this website. Find out more about his career here. 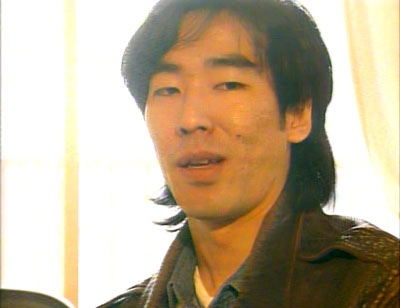 It was a natural assumption that Yamato would undergo some refining during the rebuild, and one artist who put some time into this was Masahiko Okura. His role in the production seemed to mirror that of Yoshinori Kanada, who served as a production designer on Be Forever, Yamato III, and Final Yamato. 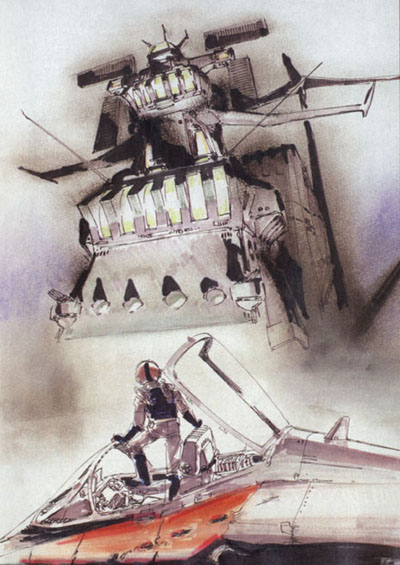 Okura shows a similar flair in his rendering and compositions, choosing unusual and dynamic angles that communicate both power and majesty. His more recent projects include Evangelion and Yukikaze. Read more about his work here.

His work became the basis of the only animated scene of the rebuilt Yamato, pictured below right. 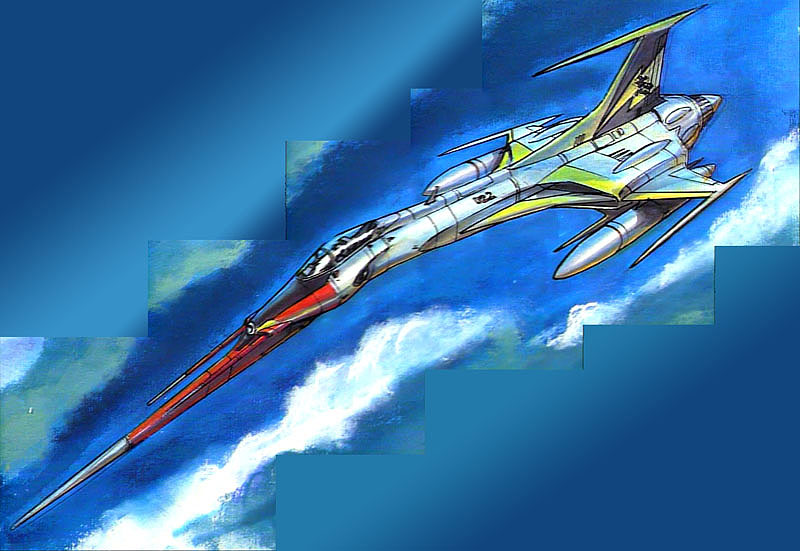 He also produced this highly modified next-gen version of the Cosmo Zero.

Another step was to beef up Yamato‘s main engine, which was outfitted with six super-chargers as seen above left. A profile view is shown below. 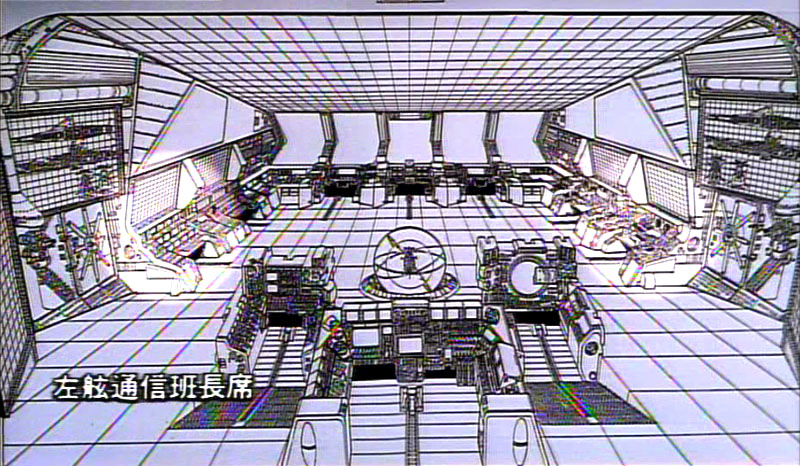 The command bridge also received a face lift, though its basic shape was unchanged.

A new cutaway view of the bridge tower was created, along with an entirely new support craft shown at right.

The idea for this vehicle was inspired by the forward radar dome near Yamato‘s bow. It was decided to turn it into a separate ship that could undock for recon missions, giving it a role not unlike the Cosmo Hound from Series 3.

Its interior was planned out in great detail, a control hub suspended inside a VR sphere. While docked with Yamato the ship would double as a navigation room. The view provided below is probably another piece by Masahiko Ohkura. 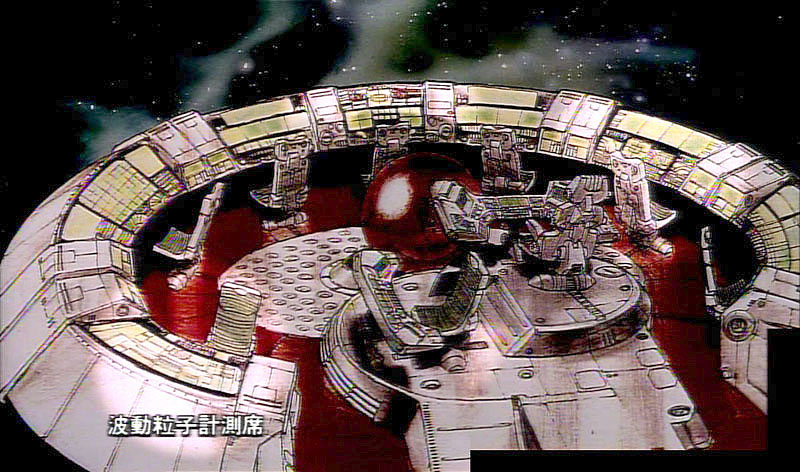 The new ship was probably the invention of Mechanical Designer Makoto Kobayashi, a consummate modeler, manga artist and anime superstar of the 1980s. Stylistically he fell somewhere between Moebius and H.R. Giger, combining his penchant for heavy Eastern European metallurgy with the anime aesthetic to create such eclectic titles as Dragon’s Heaven (1988).

It is unlikely that Kobayashi’s take on Yamato would have lead to a radical redesign like those shown here, but there would unquestionably have been many other applications for his craftsmanship.

His modeling skills had brought Kobayashi to Nishizaki’s attention a few years earlier, when he was commissioned to scratch-build the first 3D version of Syd Mead’s ship design for Yamato 2520. He did so again for Resurrection, right down to the interior of the new support ship.

He didn’t stop there, though. He went on to design side hatches that could open to house additional support craft. This was an idea with some precedent in the toy world. Similar features had previously been imagined by toy manufacturer Popy, who released the DX Big Scale Yamato (below right) during their tenure as a sponsor for Yamato III in 1980/81. Read all their product line here.

Time was also spent on character design, which began with some contributions from Leiji Matsumoto. It’s likely that the drawings above represent his only involvement with Yamato Resurrection: updated versions of Kodai, Sanada [Sandor], and Sado-Sensei [Dr. Sane].

Actual character design was conducted by an up-and-comer named Hiroyuki Kitazume. He has since become a highly-respected designer and manga artist with a huge list of credits that includes Mobile Suit Gundam, Sol Bianca, and Armitage III. A more complete Kitazume resume can be found here.

Though his style differs substantially from that of Yamato‘s original character design, his work is enormously appealing and would doubtless have won over many viewers. His versions of the older Kodai and his daughter Miyuki are shown above. The characters shown below were unnamed in the Quickening documentary, but should be immediately recognizable to readers of Star Blazers Rebirth.

That represents the sum total of Yamato Resurrection as it was promoted to the public in 1994. Be sure to compare this material with the film itself when the opportunity finally arrives. It will say much about the project’s evolution over the last several years.