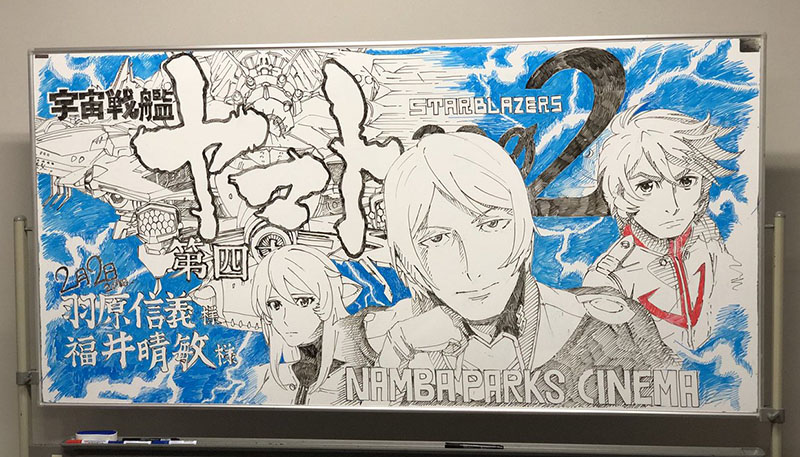 Welcome board at Namba Parks Cinema. Photos posted on Twitter by the 2202 Production Committee unless otherwise noted.

On Friday February 2, Namba Parks Cinema in Osaka held the first Yamatalk outside of Shinjuku, Tokyo. Yamatalk is an extended on-stage talk show by the staff that takes place after a screening. After watching the acclaimed Destiny Chapter, many fans could hear stories from Director Nobuyoshi Habara and Writer Harutoshi Fukui.

The talk was divided into three blocks. The first was about Chapter 4. The second was a brief introduction of Yamatalks that had been done in Shinjuku so far, and the third was a segment that answered questions posed in advance on Twitter. Here, we present all the questions and answers from this third block. (In some cases, two separate questions have been combined into one.) 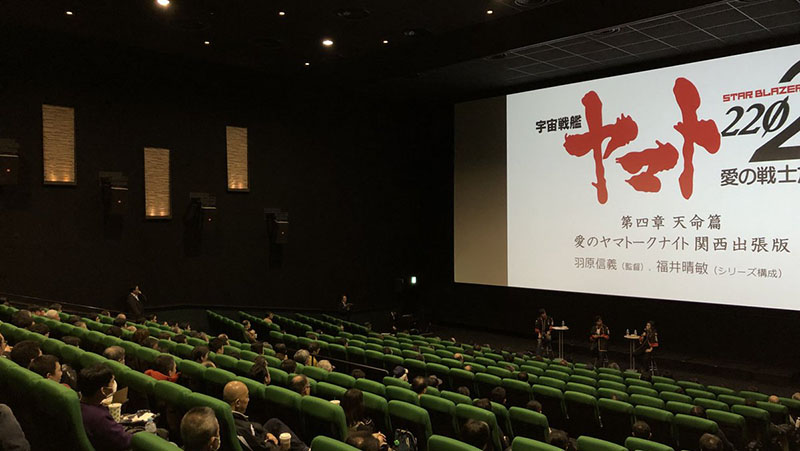 Q1: Has a date been established for Yamato‘s launch in 2202? I’m interested because the rising action taking place on a snowy day was a very beautiful style.

Habara: In Episode 2 everyone gathered at Hero’s Hill on the anniversary of Captain Okita’s death (December 8)…but did you decide on a date for the launch?

Q2: Since the promise with Iscandar not to use the Wave-Motion Gun gets scrapped, why doesn’t Iscandar say something?

Fukui: I think nothing was said from Iscandar in the first place. Besides, since it was essentially “Please demonstrate your good intentions,” that didn’t constitute a contract. For instance, even if they said “Return the Cosmo Reverse,” it’s already been used up, and they wouldn’t say “Well, why don’t we destroy that planet?” Besides, seeing as Iscandar committed major mistakes in the past, they shouldn’t be interfering in other places, should they? 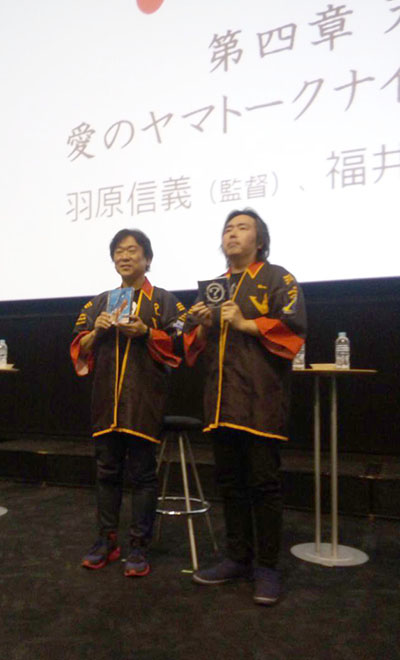 Q3: I was impressed by the scene where the Wave-Motion Drill Bullet appeared, and I could just hear Sanada saying, “I made it to save us from just such an emergency.” Will new weapons appear in the future? Has the Wave-Motion Cartridge been developed, too?

Fukui: I’m developing another one…but that’s for a future episode. It usually results in a pretty great weapon. I think it will be introduced in Chapter 5.

Q4: Is there a difference in the possible warp distance between large ships like Yamato and the big Cosmo Tiger II booster?

Fukui: Naturally, they are different. I don’t know how different, but isn’t the long-distance booster able to fly the distance of Yamato‘s small warp?

Habara: The number of times is limited. It can only be used twice.

Q5: In the indivudally-numbered mobile armors of the space cavalry, Nagakura is number 2 and Kurata was 3, but Saito was number 8. I thought as the captain he would be number 1. What’s the story behind these numbers?

Habara: That’s because there were members who died before the Telezart landing operation that had their own numbers on their suits. They go into battle saying “Fight with your soul!”

Fukui: Oh, I see. I’m hearing this for the first time. (Laughs)

Fukui: By the way, if you’re wondering why Akira gets one, humans with high physical abilities are suitable because the mobile armor follows one’s physical movement in a fight. In other words, you can’t just be a pilot of a fighter plane. If you think back to 2199, Akira is a master of martial arts (in her fight with Melda Dietz). I don’t know if Saito scouted her or she came forward on her own, but that’s how she got one. 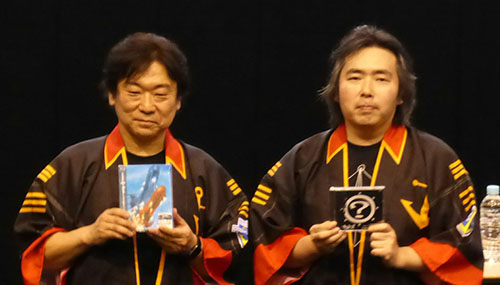 Q6: Is Hijikata a married man?

Fukui: That hasn’t been established, but I think he’s a widower.

Host: Then how about Yamanami?

Habara: I wouldn’t be surprised to find that he’s not married.

Fukui: Yamanami is popular, but what type of woman do you think he’d go after?

Habara: Someone who would keep a home very clean.

Fukui: That seems to be his aesthetic. I’d be interested to see a shot where he takes off his hat. What style would his bangs be in? All pulled back?

Habara: That hasn’t been worked out in the design, so I don’t know. I’ll ask Nobuteru Yuuki next time.

Habara: How is that? Because of his sideburns. 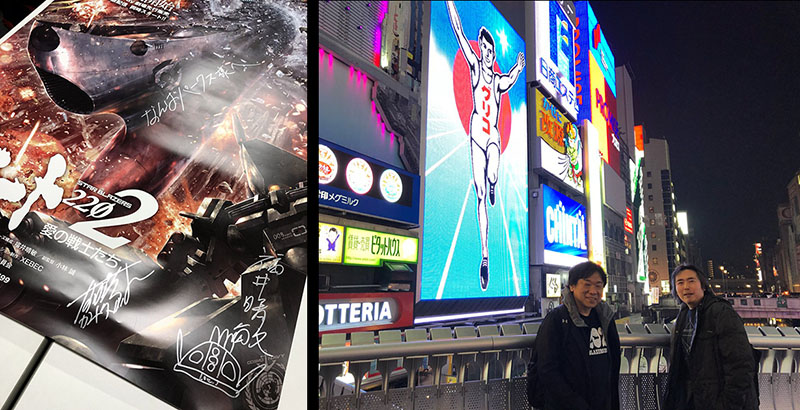 Left: movie poster at Namba Parks signed by Habara and Fukui. Right: tearing up the streets of Osaka.

Q7: Kenjiro Ota is supposed to be from here in Osaka. Is that why he’s so into food? If so, I think it would more interesting to have a character from Kansai.

Habara: It would be strange to suddenly hear a Kansai accent in 2202. (Laughs)

Fukui: Other than speaking in a Kansai accent, what would make them a Kansai person?

Habara: (To the audience) Does anyone have a request?

Visitor A: Make him a straight man.

Habara: Not a funny man?

Habara: That takes a lot of drawing. (Laughs)

Visitor C: Put a miniature of the Sun Tower in his room.

Visitor D: Stick to the source.

Q8: In the scene of Touko Katsuragi being interrogated as a spy, Aihara grimaces in the moment when she makes her confession. Was that an homage to Yamato III where he had a crush on Ako Todo?

Habara: You watched closely. (Laughs) It’s the pattern where Aihara shows interest in women very quickly and then gets totally discouraged.

Fukui: That being said…there will be an answer to this in the limited-edition drama CD from Amazon that comes with Chapter 4.

Q9: Why does the Yamato crew female uniform look glossy? Who came up with that?

Habara: They all looked the same in 2199 and there wasn’t enough detail. If cosplayers asked me “What is it made of?” or “What’s the material?” I could not answer. So this time I decided to put highlights in as a way to solidify it.

Host: What kind of material is close to it?

Fukui: You weren’t just trying to be pervy.

Q10: There was the turn of events when Keyman placed the anti-Wave-Motion lattice. Since he’s a Garmillas military officer stationed on Earth, is it insurance for when the Wave-Motion Gun is directed against Garmillans?

Q11: I’d like to know a little about how Dessler spent three years in the comet. There was no specific description in the novel or the anime. There was the interesting word “defrosted” in the script of Episode 10 (included as a bonus item with the Chapter 3 Blu-ray). Was he cryo-preserved?

Fukui: It was going to be something like that, but it turned out slightly different.

Habara: If you go by the lines in the main story of the anime, you can imagine he was frozen…

Fukui: Dessler was stuck in a timer.

Habara: And he came out with a BING!

Fukui: I don’t think it would bing. (Laughs)

Habara: But that would be something. Imagine if you could do that. What would it be like for three years?

Fukui: That could be a side-story novel by Mr. Minagawa.

Q12: Are the space fireflies a natural occurrence? I’m wondering if they were sent by the enemy.

Fukui: I can talk about that. It’s a natural occurrence, but it seems to have some relationship with the ancient Akerian civilization…

Q13: We don’t have any voice actors on the stage, but could we have a photo session with Mr. Habara and Mr. Fukui?

Fukui: Do you want to do it?

Habara: If everyone’s okay with that.

Fukui: If it’s all right with the theatre.

Host: Let’s do it if there’s enough time left. Thanks very much for the tweets, everyone. We’ll appreciate your support next time, too.