Following in the gigantic wake of Farewell to Yamato put Yamato 2 at somewhat of a disadvantage in terms of dedicated publishing. With so much of its content already covered in the enormous number of Farewell books, it was not an automatic choice for many publishers to present that same material again under a different name. Despite this, there was still plenty to choose from for fans who were willing to hunt for it.

Not included in this bibliography are the Yamato 2 novelizations, which can be seen here. 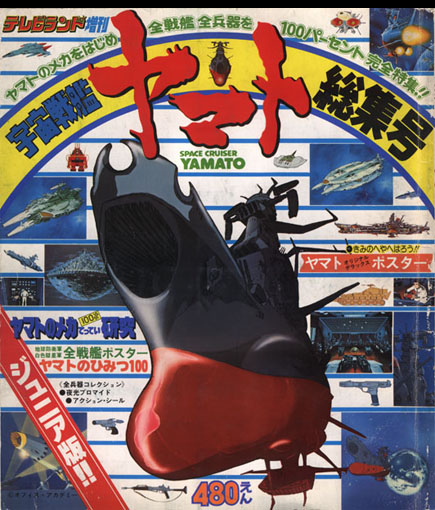 This spinoff of Tokuma Shoten’s Terebi [TV] Land magazine came in an unusually large format and was a true feast for the eyes. Pages of several different sizes were all bound together into individual sections that examined the mecha of the first series and Farewell to Yamato. Characters were also covered to a lesser extent, with some artwork from Yamato 2. Of special note was a unique cutaway drawing of the Andromeda and several pages that examine the internal systems of Yamato, which (though highly speculative) made for some interesting viewing. 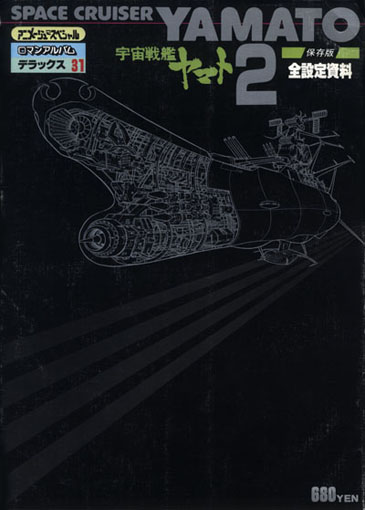 Tokuma’s third Yamato Roman Album was yet another milestone in the evolution of anime publishing. The line had gained momentum since the Farewell to Yamato edition, with another 20 volumes being published over 18 months. Now labeled as an Animage Special (to cross-promote Tokuma’s highly successful monthly magazine), Roman Album 31 offered unparalleled coverage of Yamato 2 with a full-color episode guide, a feature on production history up to The New Voyage, extensive staff essays, model sheets, and even some pages from recording scripts. It also had the distinction of being the first Yamato Roman Album published after the debut of Star Blazers, which made it a particularly hot commodity for English-speaking fans.

Terebi Land was primarily filled with manga based on popular TV shows (both anime and live-action), and also ran articles on whatever was hot. Naturally, Yamato 2 received a steady dose of coverage and was also the subject of special bonus products. In the December 1978 issue, the bonus was a “Mechanic Bromide” set of spaceship cards and a box to keep them in.

Terebi Land coverage continued into 1979 with more bonus items. These issues (for January and February) included a “Secret File” mini-binder and a set of “Deluxe Trump” playing cards, both shown below.

The “Secret File” was a simple binder cover with two pocket sleeves; the secret part was not overtly apparent. The playing cards were a bit more involved; hearts were hero characters, spades were hero spacecraft, clubs were enemy characters, and diamonds were enemy spacecraft. And Zordar made a perfect Joker. 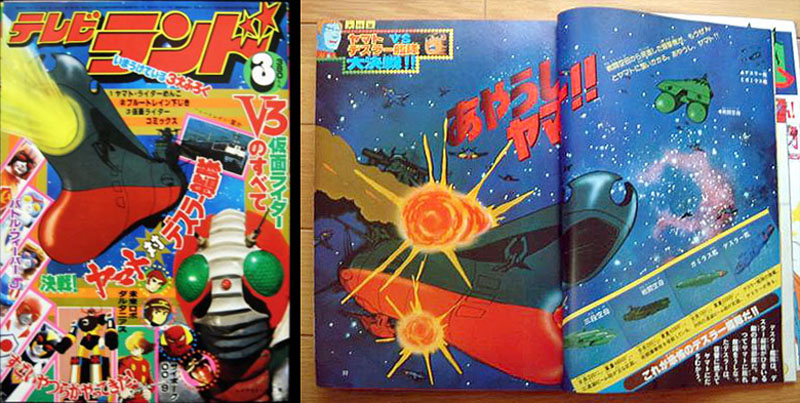 The March ’79 issue may have carried Terebi Land‘s last cover story for Yamato 2, commemorating the showdown with Dessler and the climax of the series.

Very similar in scope to Terebi Land, this was Shogakukan’s monthly journal for anime and live-action. It also kept pace with Yamato 2 on TV, which gave it a continuing presence on the covers along with such contemporaries as Gatchaman, Zendaman, and Ultraman. Shown above are the issues published from January to March, 1979

Terebi Kun was also a good source for bonus items, such as a “Bromide” book (included with the April ’79 issue) and a cardboard pencil case (from October ’79).

Items like these usually came in a flattened and unassembled form, which gave them a build-it-yourself vibe that readers found irresistible. Below is a better look at the fold-up pencil case, which had a very creative interior design. 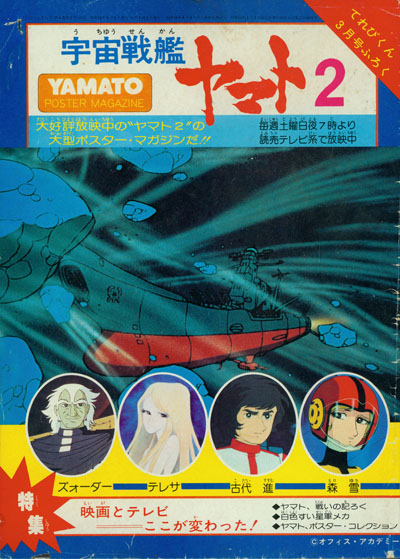 Released near the end of Yamato 2‘s broadcast, this was another insert from Terebi Kun. Coverage was somewhat thin, and the poster was a montage image from Farewell to Yamato. See the whole thing here. 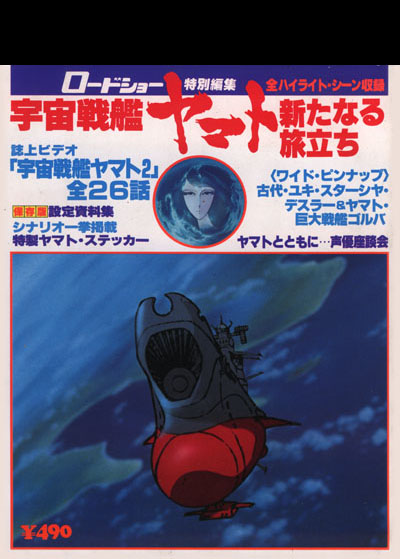 Following the format of the previous Roadshow specials for Farewell to Yamato, Shueisha turned in another winner with this one. In addition to movie coverage, it contained an excellent episode guide for Yamato 2. 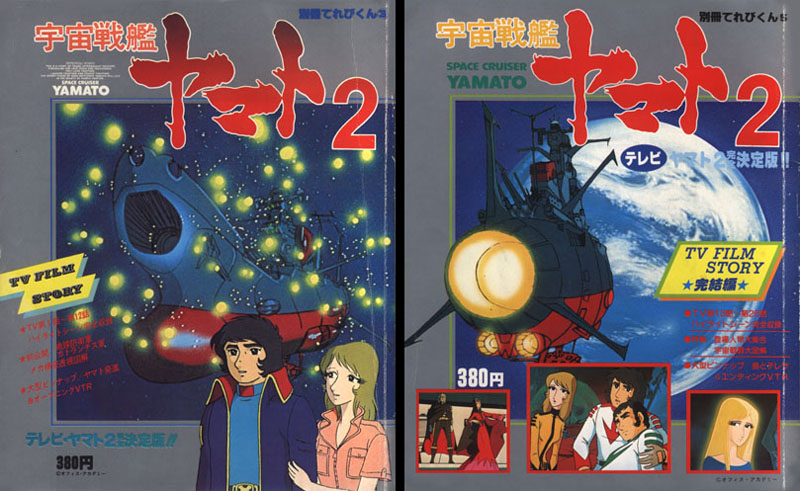 Terebi-Kun [Dear TV] magazine carried the most extensive month-to-month coverage of Yamato 2, and these two volumes (from a series of spinoff specials) provided the best collection of full-color stills that could be found anywhere. The first volume covered episodes 1-12 with a support section of mecha art that included the four cutaway drawings from the ‘Big Compendium.’ The second volume followed up with coverage of episodes 13-26 and a section of battle maps and character profiles.

This was a bonus insert in Adventure King, the monthly manga magazine that serialized Leiji Matsumoto’s Farewell to Yamato manga. This 2-sided foldout poster featured Earth Defense Force spacecraft on one side and a unique Yamato painting on the back. It appears to have been commissioned solely for use by Tokuma Shoten, since it never appeared anywhere else.

This one came in the next issue Adventure King, giving the same treatment to the enemy ships. The issue was released shortly before the end of the TV series. 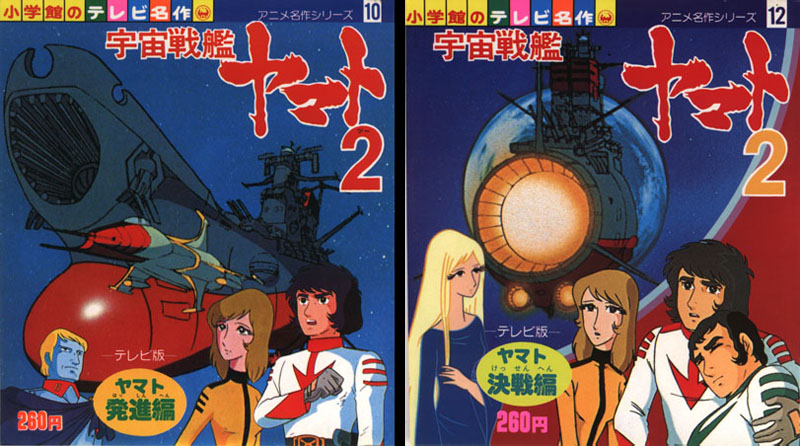 This all color, two-volume retelling of the TV series was formatted with minimal text and color stills. Shogakukan utilized this format for many other children’s books based on movies and TV shows, including both anime and live-action. There were a total of 7 Yamato volumes up to and including The New Voyage.

Even more coverage from Shogakukan, which seems to have been the front-runner in terms of Yamato 2 publishing, was to be found in their monthly children’s magazines. Yamato was certainly not a newcomer to these pages; 4th Grader, 5th Grader, and 6th Grader featured episode guides and custom-drawn “picture stories” for the first TV series back in 1974. Read more about them here.

Compiled and written by longtime Yamato fan Hideaki Ito, this amazing volume came packaged with the DVD Memorial Box for the second TV series and covered a wealth of topics in incredible detail, from the making of the anime to its many forms of merchandising. This book and its companion volumes have provided valuable research for this website, and are highly recommended for serious collectors.

Continue to the New Voyage bibliography