CLICK HERE to listen to Episode 109 of the Speaker podcast in which host Gwyn Campbell and Cosmo DNA editor Tim Eldred discuss Chapter 5 scene by scene. (And Tim gets a few details wrong. Sorry, world.) 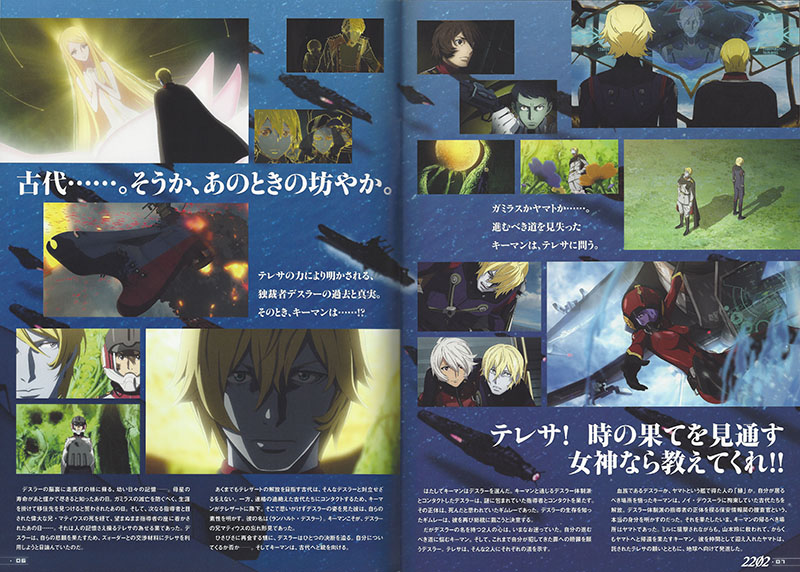 The truth of the dictator Dessler’s past, revealed by the power of Teresa.
At that time, Keyman…?

Memories of younger days revive like a spinning lantern in the mind of Dessler. One memory after another, starting with day when, as a child, he learned that the life of his mother planet would end. On that day he swore to prevent the extinction of Garmillas by finding a new home for his people.

Years later, after the death of his great brother Matheus, who was seen as the next leader, he took the leadership position he didn’t want and became the leader of Garmillas. It is Teresa, manipulating his memory. In order to fulfill his wish, Dessler’s goal is to use her as a bargaining chip with Zordar.

Intent upon freeing Telezart, Kodai cannot help but come into conflict with Dessler. As Yamato tangles with Dessler’s fleet, Keyman descends to find Kodai and the others after they lost contact. Upon seeing Dessler, Keyman unexpectedly reveals his own identity; his name is Ranhart Dessler. Keyman is the forgotten child of Dessler’s brother Matheus.

Reunited with his nephew, Dessler presses him to decide his loyalty. “Will you follow me?” And Keyman points his gun at Kodai.

“Kodai…I see, the boy from that time.”

Episode 15 notes
(from the video booklet)

Dessler’s uncle Erik, who was set up in 2199, appears on screen for the first time. The young Dessler, who was burdened with an unwanted mission, became president against his wishes. The secret anguish of one who was to rescue his people from extinction is revealed.

It is interesting that the tower of the presidential building, which the core ship fits into, is interpreted as a Dessler cannon aiming at Iscandar, floating high above.

Cosmo Tiger pilot Jiro Tsurumi appeared only once in Farewell and Yamato 2, but now he is presented in full for the first time.

Keyman, who has lost sight of which path he should take, asks Teresa…Garmillas or Yamato?

Keyman has chosen the side of Dessler. Dessler takes Keyman under his wing and makes contact with the leader of his regime on Garmillas, who was shrouded in mystery. It is Gimleh, thought to be dead. Gimleh, who has learned of Dessler’s survival, agrees to support him again.

However, the hearts of the two people named Dessler are still in doubt. Keyman is troubled by his path forward, and Dessler seeks redemption for the crimes he has committed so far. They both go separately to Teresa, who shows each of them a way.

Is Keyman a blood relative of Dessler (the edge) or one who boarded Yamato? Realizing his true place, he frees Kodai and the others from detention on board Neu Deusular. Varel and his fellow investigators on the Garmillas intelligence security bureau identify Gimleh the true leader of the Dessler regime and arrest him. With this achieved, Keyman’s place is to return to Yamato. After being shot by Miru, he is rescued by Akira Yamamoto and he fulfills his homecoming.

Teresa departs to the next world and allows Telezart to disperse into space. Trusting the word of Teresa, Keyman is greeted as a friend and Yamato starts for Earth.

“Teresa! Please tell me if a goddess can see the end of time!”

Episode 16 notes
(from the video booklet)

Acting on his own volition, Keyman learns the true intention of Dessler to preserve his race, and this is an episode in which troubled partners proceed together.

Initially, the leader of the Dessler regime was to be Hyss, who would lean toward democratization, but it developed into a plan to reveal a surprise. Since Hyss was not an overt villain, Gimleh was chosen instead.

Teresa’s final message is only heard by Yuki, who did not receive a message before now. 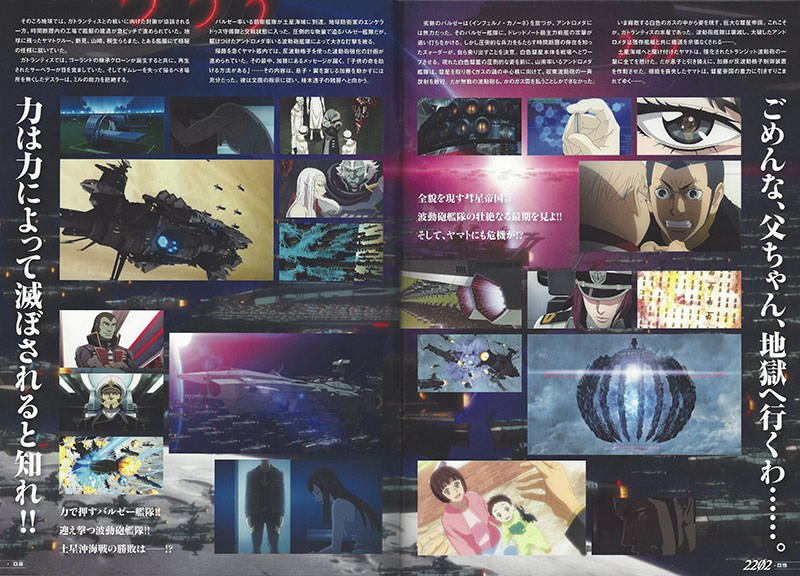 The Baruzei fleet pushes forward with force!! The Wave-Motion Gun fleet engages!
Victory or defeat in the interplanetary battle!?

On Earth, countermeasures are discussed for war with Gatlantis, and construction of ships in the time fault factory suddenly advances forward at fever pitch. Niimi, Yamazaki, Kiryu, and the rest of Yamato’s crew that remained on Earth have a secret mission in a certain ship, the Prometheus.

On Yamato, Keyman has placed himself in a cell next to Katsuragi, who has developed her own plan of action. On Gatlantis, Goland’s successor clone is born and the remade Sabera awakens. Dessler, who has lost both Gimleh and a home to return to, is given one more task by Zordar. He and his people can go free if he defeats Yamato.

Baruzei’s vanguard fleet reaches the Saturn area, entering a state of war against Earth’s garrison at Enceladus. Although Baruzei’s fleet approaches in great numbers, it suffers a huge counterblow by the Wave-Motion fleet lead by Andromeda. Desperate, he orders a new weapon brought up: the Inferno Cannon.

Yamato hurries home with a plan underway to strengthen the Wave-Motion Gun using the Anti-Wave Lattice. Meanwhile, a secret message arrives for Kato: “There is a way to save your child’s life.” The content is enough to move Kato, who worries about his son Tsubasa. According to the instructions in this message, he goes to Touko Katsuragi’s cell. She greets him with a cold phrase: “Welcome to hell.”

”Know that power is destroyed by force!!”

Episode 17 notes
(from the video booklet)

The stage of the battle between Baruzei’s fleet and the Earth fleet is the defensive line at Saturn’s orbit, as in Yamato 2.

Yamato’s crew members who remained on Earth are active at the time fault factory. Saki Todo, the captain of the mystery battleship, appears here for the first time. Also note the first appearance of the keyword Galaxy.

The Comet Empire is completely revealed.
Behold the heroic end of the Wave-Motion Gun fleet!! And a crisis on Yamato!?

Outnumbered, Baruzei unleashes the Inferno Cannon, but is powerless against the Andromeda fleet. A fresh attack by the Dreadnought-class battleships turns the tide against the Baruzei fleet. But Zordar has learned of the existence of the time fault that would create these prodigious forces, and is determined to intervene personally.

The main body of the White Comet warps into the battlefield. Yamanami leads the Andromeda fleet against the overwhelming figure of the White Comet and dares to fire upon the core of the gas vortex surrounding the comet with convergent Wave-Motion Guns. However, it is only enough to disperse the gas cloud.

The huge Comet Empire is revealed as the white gas atomizes; the enormous core world of Gatlantis. The Wave-Motion fleet is destroyed, and the damaged Andromeda is forced to withdraw with the remaining vessels.

Yamato, having rushed to Saturn, risks everything on a single blow from the strengthened Wave-Motion Gun. But in exchange for his son’s life, Kato activates the Anti-Wave Lattice control system. Yamato loses power and is dragged in by the gravity of the Comet Empire…

Episode 18 notes
(from the video booklet)

Don’t miss the figure of the battleship being built in the time fault.

With respect to the shot taken at the White Comet, there was a multi-formation Wave-Motion attack in Farewell to Yamato, but that was a “dispersion” type rather than “convergence.”

In order to understand the strange appearance of the grand empire, when Yamato previously came in contact with the enemy and noted that they matched the size of Mars, they mistook one of the planets floating in the lower part of the structure for the entire thing.

Isao Sasaki, who played Saito in the original, now appears as Shintaro Yasuda, the captain of Apollo Norm. The character is modeled on Shuichi Yasuda, the president of Yamato 2202 sponsor Under Armour.