Voice actor Eriko Nakamura first appeared in the latter half of Yamato 2199 and has been serving as both a character and a superfan ever since. Mikage Kiryu only appears briefly in 2202, but Nakamura has been a prominent advocate for all things Yamato the entire time. Akiba Souken talked with her about her role and her fandom just before the premiere of Chapter 5. 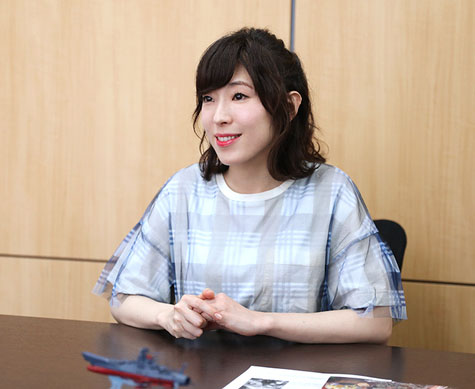 Chapter 5 of Yamato 2202, Purgatory Chapter finally opens nationwide on May 25, 2018. The crew of Yamato achieved an encounter with Teresa in Chapter 4, and then the shadow of an enemy crept in…Dessler. In addition, a direct confrontation with Gatlantis and its invasion of Earth is finally in the offing. This is an important chapter in the 7-part series, and we hear the highlights from Eriko Nakamura, who plays the role of Mikage Kiryu while also serving as Yamato’s MC in the Promotional Meeting of Love web series.

Interviewer: You appeared in the role of Mikage Kiryu in Yamato 2199, and I heard that you studied Yamato quite eagerly…

Nakamura: Not just for knowledge. Originally I knew there was a work called Yamato, but I wasn’t very familiar with it when I participated as a voice actor in 2199. But before I appeared in 2199, I got the story about the movie (Ark of the Stars) and I was asked to appear in 2199 talk events related to that. Of course, I said, “By all means!”, but when I thought about it carefully, Mikage Kiryu is a crew member who appears along the way (in Chapter 6), so I didn’t know the first half of the story well. So if I was going to talk about it, I thought, “I’ll talk about Yamato for Nakamura, who doesn’t know much about Yamato.” It was agreed that this could increase the range of fans, too.

[Translator’s note: in terms of production history, Ark of the Stars was conceived as a film while Yamato 2199 was still in production. Mikage Kiryu was a character created for the film, so she was written into the series as early as possible. This timing meant that her earliest possible appearance was in Chapter 6.]

Of course, “I don’t know what I don’t know,” so I had the strong feeling of “I want to watch it!” from the first chapter. I was able to see all the episodes that had been completed up to that time, and since I hadn’t appeared in them I could watch them through the eyes of a fan. When I finished I said, “This is fascinating!” 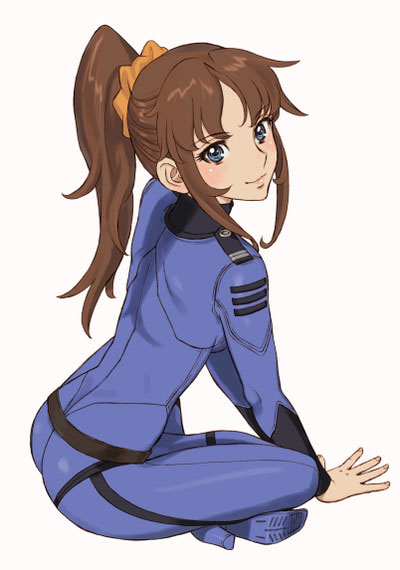 Interviewer: Isn’t Yamato basically a boy’s anime? What’s the reason you got hooked on Yamato?

Nakamura: If you watch the original Space Battleship Yamato from 1974 and then watch Yamato 2199, I think you can say various things are different. Until now, I thought it would be better not to see the original as much as possible! When you see the flow from 2199 to 2202, the old work feels like a parallel world, and I thought that might make it difficult to perform.

I can’t give you a comparison between the differences of the old work and the new work and what’s good. I thought 2199 was all about “fighting” and “justice,” but it’s not at all dualistic. There are a number of people who experience sorrow, happiness, and joy, and we see their way of life. There are places where you can’t completely divide enemies and allies, and it feels wonderfully human. I really like them, but I have to kill them. And the fragility of human beings forced into absurd situations is well depicted. The first time I saw Yamato I was like, “wow.” That’s why I love it.

Interviewer: I see. It’s not as though you’re saying you particularly liked Yamato‘s battle scenes, but you were drawn in by their drama, is that it?

Nakamura: As far as the awesome-ness of the battle scenes, it was a feeling I came to gradually understand. By building up the technical advancement as chapters progressed, it was possible to have some awesome fights. In the part where they fought the Domel fleet, I thought, “This is going to be great!”

But the “people are fighting against people” part was never blurred in any of the chapters, which I think is a wonderful part of Yamato. It’s never a hand-to-hand fight because everyone’s power is concentrated into the ships that clash with each other, but even if it’s not real flesh and blood, it has a great feeling of humanity there. It may be that there couldn’t be a work called Space Battleship Yamato if it didn’t depict this.

Interviewer: Unlike general robot anime, there isn’t one lone hero in Yamato. The whole team fights with all they’ve got. That sense of teamwork is strong, isn’t it?

Nakamura: It’s also due to the command structure. The military is all top-down, and in the case of Yamato we communicate with each other. I think that’s the result of the production team trying to depict each character properly. 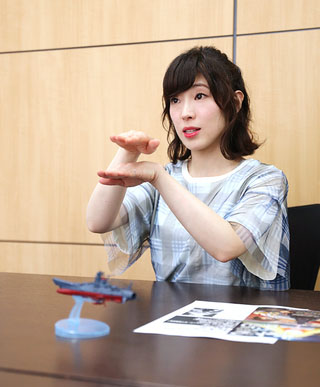 Interviewer: What was your first impression of becoming involved with Yamato? Did you feel like you “became a member of Yamato’s crew”?

Nakamura: Only after I saw the responses of people who saw it. Then I thought, “Oh, I’ll be getting on board Yamato.” People who didn’t know I would appear in it had gone to see 2199 and there were a lot of reactions like, “You’re going to be on Yamato?” Or I’d tell a friend, “I’m going to be on Yamato,” and they’d say, “I was thinking of going to see it, but now I definitely will.” That was a first for me.

Interviewer: It seems there have been a lot of reactions among other cast members. In particular, they loved Yamato in their childhood. The reaction from those around 50 is amazing.

Nakamura: That’s right. But my parents’ reaction was entirely different. When I went home to their house for the new year holiday, I reported on my year and told them I appeared in Yamato and they went, “Eh? Yamato?” (Laughs)

Even if you don’t get on board Yamato in the story, there is a strong consciousness of being “one of the crew”

Interviewer: Was there some pressure during the voice recording? I would think a lot of veteran actors lined up there.

Nakamura: There wasn’t much pressure during the recording. The combined power of the performers is wonderful, and it’s never a closed circle. It’s an open circle, so it was easy to enter. In the recordings for 2199, there were a lot of people on both the Yamato crew side and the Garmillas side. And so while it just comes with the territory with voice acting, you perform no matter which side you’re on.

There are exchanges at the site like, “You’re an enemy today!” And you’re a cast member who really likes Yamato when you can translate Garmillas words. You’d say, “It’s written here in Earth language (it doesn’t say Japanese), so how do you say it in Garmillas?” And the answer comes back right away. (Laughs)

When I boarded Yamato the feeling wasn’t how many lines do I have, or how often my name appears, because that’s entirely irrelevant to the atmosphere. Even if you don’t go on board Yamato in the story, there is a strong consciousness that you’re a crew member of Yamato. 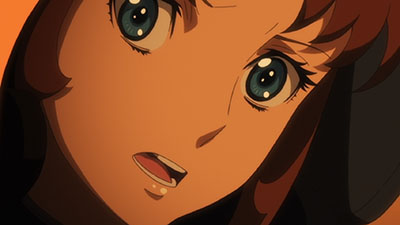 Interviewer: With that, let’s move on to the story of 2202. Doesn’t Mikage Kiryu become one of the “residual group” that stays behind on Earth? What was your feeling about that at the time? Did you feel some loneliness at not being able to participate in the voyage?

Nakamura: Hmm. When I first met Mikage (in 2199 Chapter 6), Yamato had already accumulated a lot of battles, so it looked like I joined up in the middle. Therefore, I was able to see some aspects of it objectively, just like the audience. As for 2202, when I heard what Mikage’s part of the story would be, my feeling was, “In the meantime, I can watch it purely as a Yamato fan!” That’s how I still feel about at the present.

Interviewer: So with 2202, you feel like you’re following the voyage with the view of a fan?

Nakamura: That’s right. It’s a strong feeling. Of course, while the rest of the crew is working hard on Yamato, I’m thinking about what Mikage is doing on Earth. That is certainly one of the ways it’s fun to be a fan! That’s what I think.

Interviewer: Still, doesn’t it seem like you’re waiting on Earth for a long time?

Nakamura: Yeah, but no matter how long it takes I’m still thankful that I can meet with the cast and staff and hear their stories in the Promotional Meeting of Love web program. 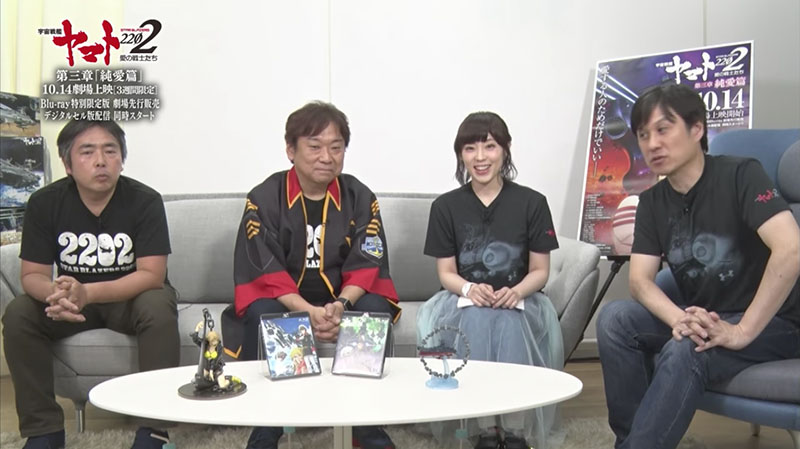 Interviewer: Does it feel like you’re all really far apart?

Nakamura: It does! It might be the same way Mikage feels. I’m working hard here (on Earth). What about over there (Yamato)? That’s what it’s like.

Interviewer: After a long absence we go back to Earth in Chapter 5. You’ve been waiting a long time to appear again.

Nakamura: To tell the truth, I had sort of forgotten about it. (Laughs) Of course, I remembered that I would be appearing in Episode 17, but since I think of it in “chapters” rather than individual episodes, I didn’t really understand the before-and-after connections. So when I saw Chapter 5, I thought “Eh? Haven’t I seen this story somewhere?” It was sort of a déjà vu state. “I feel like I’ve heard the voices of these characters. Oh, it was in the voice recording booth!” (Laughs) It felt like it had a sort of delayed impression on me.

Interviewer: What kind of impression do you have so far from watching 2202 through a fan’s eyes? 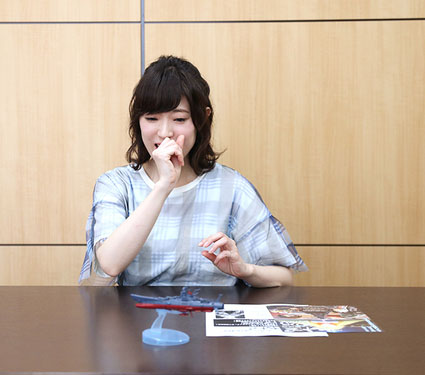 Interviewer: This is getting serious, huh?

Nakamura: That’s what I said about Chapter 4 and now you can say it’s getting really serious in Chapter 5, but wasn’t that the feeling about Chapter 2 I had back at the stage greeting for Chapter 3? I’m always saying, “This is getting serious” and that doesn’t change, it’s always been like that and it’s always going to be.

Interviewer: Every time a new chapter comes out, it always gets more serious, doesn’t it?

Interviewer: Morever, the subtitle this time is Purgatory Chapter. This is an atmosphere that I think will be quite dangerous. At last we have the fight with the mortal enemy Dessler, and there is direct confrontation with Gatlantis. 2202 is also packed with unique, original elements. How about that part?

Nakamura: As I mentioned earlier, I don’t dare to look at the older work. 2202 is all of Yamato for me. In that way, it may be lucky that I’m always seeing it fresh. When all seven chapters of 2202 are completed, then I think I’ll finally lift the moratorium and see the old work. Only then will I know how various elements are different. Then I think I’ll be able to enjoy it two or three times.

Even though I participate in the voice recording, that’s only one piece of Yamato, and for it to become a work called Yamato 2202, I think all the elements have to be engaged. So even if I previously knew the story at the voice recording, for me I always get a fresh look when I first see it.

Interviewer: Finally, please tell us what you consider to be the highlights of Chapter 5.

Nakamura: Suddenly, the enemy Dessler appears before the eyes of Kodai. What exactly is an “enemy?” While watching Chapter 5, I lost track of that more and more. What does Yamato fight for and fight against? In that way, you get caught up in a pleasant sort of confusion. And in there is the definition of “enemy,” and I think you can discover the meaning of “an enemy produced by love.”

Interviewer: The theme is “love,” after all.

Nakamura: That’s right. At the moment, I feel like “love” is very painful… (Laughs) 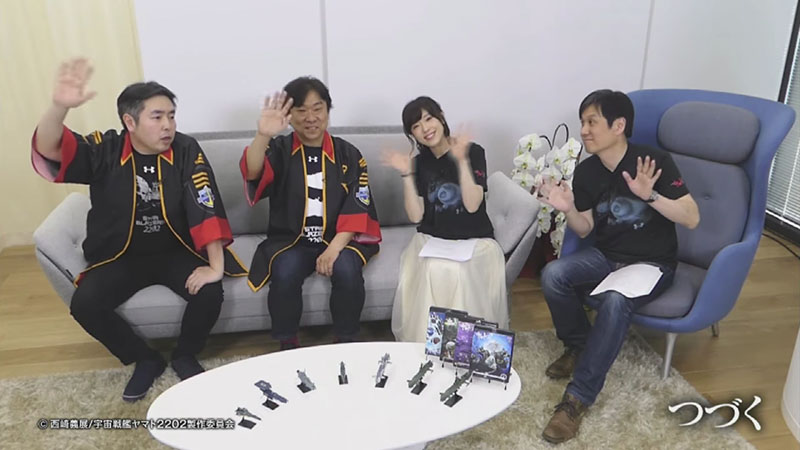