by Tim Eldred (with commentary) 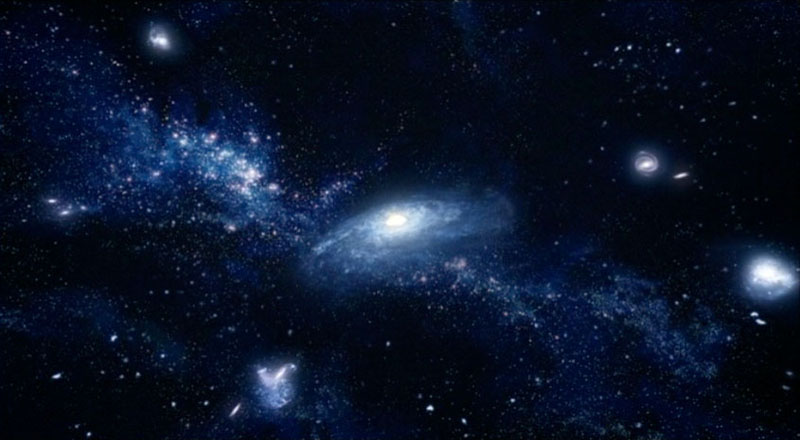 Fade up on OUTER SPACE.

The haunting solo female voice and the infinity of space theme float up out of the darkness. We cruise past glittering galaxies to the center of the Milky Way, the site of a super-massive black hole. The narrator explains what we’re seeing, which is good because we’ll see more than one of them in this movie. Black holes are the true masters of time and space…and as such, they are alive. Suddenly, two vivid red tendrils burst out, spiral around each other, and fly eagerly toward the stars. Hunting?

Next we soar into the solar system in a reverse of that magnificent opening pullout in the movie Contact (my favorite film of all time) and Earth looms up to fill the frame. Lions roam the African Savannah, the cradle of life. In nature, life feeds on life. A black hole is akin to a lion roaming the Savannah. Back out in distant space, a blood red tornado plunges toward our planet, intent on feeding. The narrator calls it a Cascade Black Hole. It will lead to nothing good. 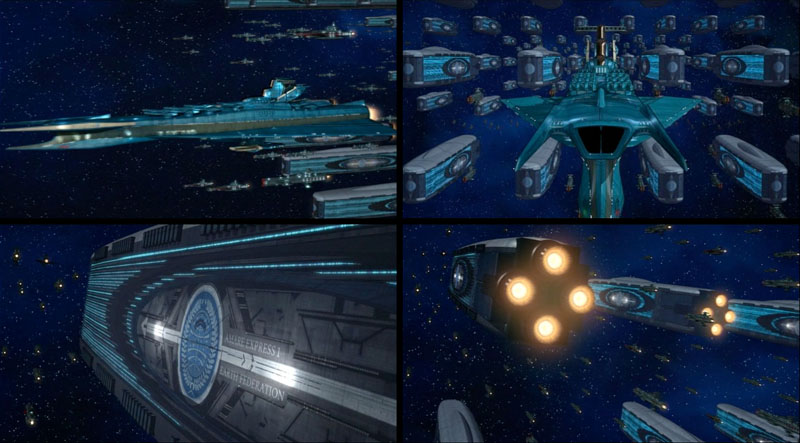 Earth Federation Flagship (formerly ‘Fragship’) Blue Noah lumbers past us, followed by others that fall into three categories: Space Battleships, Super Andromedas, and the flying bathtubs that form the Amare Express emigration fleet. There are dozens of these, each the size of a city block. Earth’s entire economy must have gone into building them, which will be somewhat embarrassing if Earth is saved and they didn’t have to leave after all.

Suddenly, Blue Noah‘s captain gets an emergency alert: alien ships are warping in directly ahead. 900 of them by one estimate. They attack without warning, and combat officer Satoru Kamijou is the first to shoot back. The sides look evenly matched. Every Super Andromeda has a dispersion wave-motion gun that fires, flares out (oh MAN does it look deadly on a big screen), and smashes a dozen enemies at a time…but they just keep coming.

The Earth ships are overwhelmed in minutes. The unarmed emigration ships take the worst of it, the glowing red ships of the enemy plunging straight into their hulls and exploding them from the inside out. One Super Andromeda is disabled and the commanding officer–Captain Kodai–orders them to warp away. The bridge takes a direct hit and the captain’s clothing is peeled off in slow motion. Her hat drifts off her blond hair as the ship phases out of existence.

Yes, this is Yuki. This is all we’re going to see of her. Take a moment to process that now. Only one thing’s for sure–wherever she goes next, she’s naked. (Aside: A Japanese fan showed me a storyboard image of Yuki being consumed by an explosion. Originally this was meant to be her death scene but it was changed to be more ambiguous. Until and unless we we get a sequel, we won’t see her again. But she is definitely not forgotten in this story.)

Cut to a supply station orbiting a remote planet. Earth cargo vessel Yuki takes on some freight and a letter is delivered to her bearded captain, also named Kodai. The 3-month old letter is from his wife, who looks forward to his return home after three years in space. Why Susumu Kodai now runs a cargo ship is unexplained. But nearby on his bookshelf sits a photo of himself with his wife and daughter in happier times. His hand rests on his daughter’s shoulder. The tragic love theme from The New Voyage is heard in the soundtrack. It now serves as the emotional portrait of the Kodai family.

An alert signal calls Kodai to the bridge; ship wreckage has been detected. He takes his post and his bridge crew powers up the engine. They are Deputy Captain Kosaku Omura and jack-of-all-trades Yoichi Sakurai. The ship warps out and rematerializes near the crippled, smoking hulk of the Blue Noah.

This is a minor scene, but it’s absolutely chilling, especially on the big screen where you’re practically seeing it life-size. There’s a music sting from Farewell to Yamato–the scene where Yamato arrives at the smoking wreck of Captain Hijikata’s ship. That’s what makes this moment so haunting; it pulls on that thread of recognition and invokes a classic moment. If you’ve got CD#3 from the Eternal Edition series, it’s right at the beginning of track 10. Listening to it now gives me chills.

They dock to investigate and find Kamijou, the only survivor. Kodai and his bridge crew board the ship to hear his story about the ambush, then they are attacked again. Three stragglers from the enemy fleet on cleanup duty. Blue Noah groans back to life and Kodai takes the helm along with Sakurai and Omura, and Kamijou takes his post at the gunner’s station.

Kamijou wants to fire on them immediately, but Kodai orders him to hold off. They only have enough power for one shot, so it has to count. Under his command, that’s all they need; a brilliant maneuver and precise timing takes out all three ships. The men are formally introduced and Kamijou’s jaw drops. 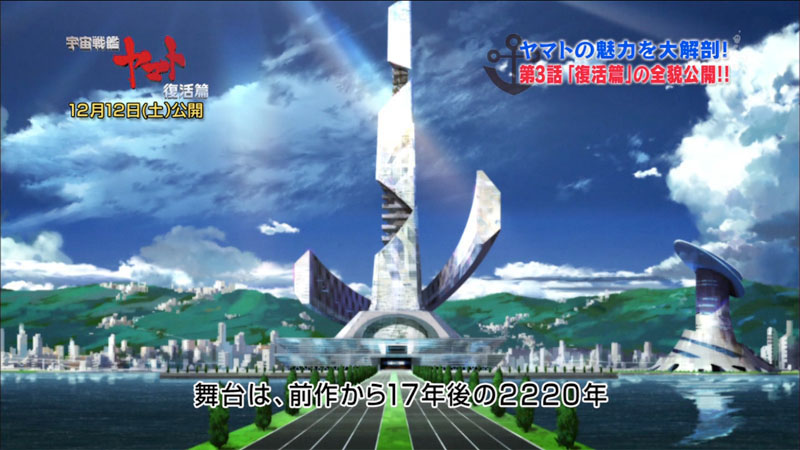 Earth. Reports of the attack flood into Federation headquarters. Sanada is the EDF commander now, with Shima Daisuke’s younger brother Jirou as his right hand man and director of the Emigration Fleet. Kodai is inbound and ponders Yuki’s letter as he shaves his beard. (Ritualistic cutting of the hair, perhaps?) As they approach Earth they pass the shining ice asteroid Aquarius and the symbol entombed inside.

Kodai meets with Sanada and we get the backstory. The Cascade Black Hole was first detected a few years ago and is headed directly toward Earth. A pact was made with another civilization 27,000 light years away on the Planet Amare. Earth’s people are welcome to live there. The Emigration Fleet seen at the start of the film was the first wave, and there are three more to go.

Kodai talks privately with Sanada at sunset about the grim fate of Earth, and Sanada asks him to take command of the next Emigration Fleet’s escort. Kodai turns him down, claiming not to be the man he once was. Sanada explains that Yuki could not sit by and watch Earth be snuffed out. She volunteered for duty in the first Emigration Fleet…the one that was destroyed. After nightfall Kodai returns to the family home on a seashore. It bears more than a passing resemblance to the house in Be Forever, but it’s not identical. Still, that house was my pick in Star Blazers Rebirth and it wasn’t far off.

Kodai reads Yuki’s letter once more and Miyuki arrives home. The distance between them is made immediately obvious by their stiff body language. She knows about her mother. We expect a hug, but there isn’t even a touching of shoulders as in the photo, which is our only clue to a different life that preceded this one. Aquarius floats overhead like a ghost and they speak without emotion. Miyuki blames Kodai for Yuki’s death–she believes he resigned from the EDF because he was “obsessed with Yamato,” and now captains a cargo vessel because he loves space. Yuki became a captain to take his place, and paid for it with her life. Before Kodai can respond, he is called back to headquarters. Miyuki is not surprised or even unhappy that her father is walking away from her again. It’s how their lives work now.

The news has gotten worse. The second Emigration Fleet was attacked, this time by three different enemies with unique color schemes; red, green, and blue. None of them resemble the first attackers, which means Earth has at least four new enemies. Once again, the fleet was overwhelmed and destroyed. Sanada and Jirou ask Kodai to take command of the third fleet. This crisis demands an experienced leader.

Without hesitation, he accepts the promotion and Sanada surprises him with the name of his new vessel.

“Yes. Yamato is waiting for you.”