Hands down, the Comet Empire TV series is everyone’s favorite Star Blazers story. As much fun as The Quest for Iscandar is to watch, the best dramatic twists and richest character moments are all in Series 2. Undeniably, this is an important benefit of having the classic first series to fall back on, but that’s only part of it.

To this day, stories are still being told by those who were there about the seat-of-the-pants production environment of Series 1, the amazing talent that rose to every challenge, the crushing blow of low ratings, and the many pathways blazed into the future. Indeed, many of those stories are just a few clicks away on this website. Knowing that background gives one a greater appreciation for the vastly different circumstances under which Space Battleship Yamato 2 was created.

To that end, it’s worth taking a few paragraphs to review the highlights that lead to this moment. 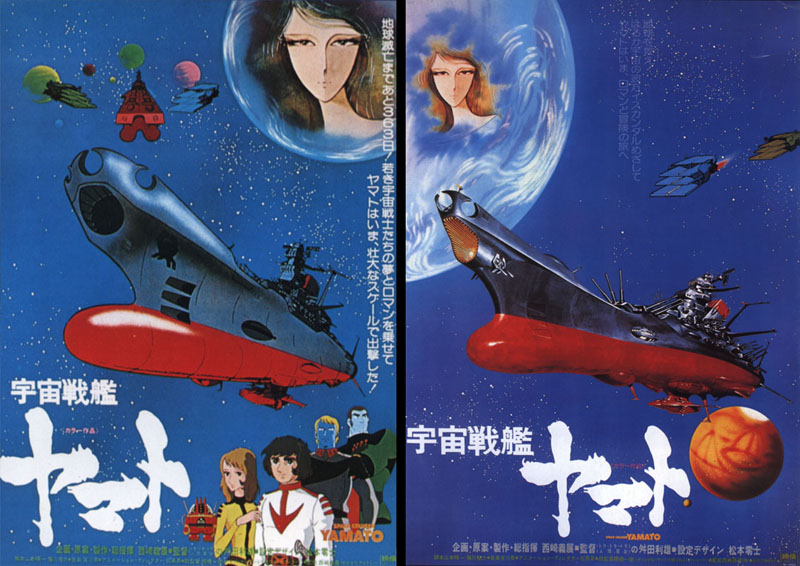 At the beginning of the first TV broadcast in October 1974, Space Battleship Yamato lost the ratings war against its greatest rival, Girl of the Alps Heidi. The 39-episode plot was reduced to 26 as a result. However, Yamato had made many fans in middle-school grade levels who came to the rescue in its hour of greatest need. They organized private fan clubs, published fanzines, and helped ratings to go up with every subsequent rerun.

Immediately after finishing the TV series, Academy Studio completed one additional project, which was to edit the 26 episodes down to a 98 minute movie. It was dubbed in English, renamed Space Cruiser Yamato, and made its overseas debut in the spring of 1977. This was reported in the club fanzines and the April ’77 issue of OUT Magazine, which created a huge sensation among the fans.

Producer Yoshinobu Nishizaki and director Toshio Masuda re-edited and lengthened the movie for Japanese release on August 6 at four theatres in Tokyo. They got the fans to help raise awareness of it with a guerilla marketing operation that quickly went nationwide and convinced other cities to pick up the film. The huge crowds that surrounded theatres on the premiere day became the stuff of legend; newspapers everywhere reported the birth of Yamato as a cultural phenomenon.

The film played for 83 days, during which time it mobilized 2.3 million people and earned 2.1 billion yen, making it the ninth highest-grossing domestic movie of the year. Never before had a homegrown animated film achieved such a thing. The unprecedented sales of novels, LP records, model kits, books, and other merchandising cemented Yamato‘s place in Japan’s history for all time. The phenomenon was so big it even brought a new word into Japan’s pop-culture lexicon: Anime. 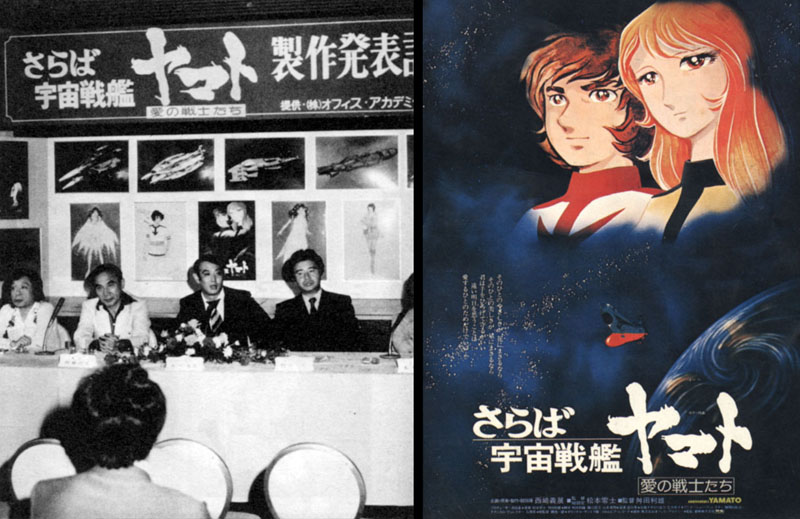 It all started up again on May 24, 1978 with a heavily-attended press conference in which Executive Producer Yoshinobu Nishizaki announced the production of Yamato‘s sequel. Farewell to Yamato would open at 133 theatres in August and bring the phenomenon to a decisive end. Or so everyone thought at the time. The official Yamato fan club was in full swing by that time with over 180,000 members who bought advance tickets and followed every development with great anticipation.

This included the assignment of fashion designer Yukiko Hanai to create costumes for the characters, and the involvement of pop superstar Kenji Sawada to record the ending theme song in strict secrecy. Further proof of Yamato‘s popularity came with the arrival of a new anime specialty magazine on June 10 named Animage. Farewell to Yamato dominated its first two issues, and further coverage could be found in the ongoing OUT Magazine. (Our series on the making of Farewell, which includes story development, begins here.)

Fuji Television won a bid (on June 20) for the broadcast rights of the first Yamato movie. They had paid the unheard-of sum of 50 million yen (about half a million dollars US) and scheduled it for the night before the new movie opened. It premiered right on time, capturing an astonishing 31.9% share in the ratings. As if that weren’t enough, the Nippon Radio Network broadcast a 4-hour radio drama of Farewell in the early morning hours. Doubtless, it kept many fans awake who had chosen to spend the hot August night camped out at movie theatres.

Once again, they were stretched around the block for the first screenings on August 5. This was meant to be the beginning of the end for Yamato. Instead, it was the end of the beginning.

From Silver Screen to TV Screen

As Farewell to Yamato drew to a close, fans wept copious tears for Kodai as he faced off against the Comet Empire’s Giant Dreadnought and Teresa the space goddess lead him to his final fate. According to newspaper reports of the time, this suicide attack was controversial with some adults who said it reminded them too much of World War II. It caused a different sort of controversy among young fans, who petitioned Academy Studio to find some way of prolonging the lives of their heroes. 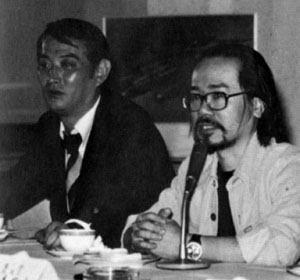 Like its predecessor, Farewell ran in the cinema for 83 days, closing on October 27 after having earned roughly twice as much as the first film. It had been seen by 4 million people and made a profit of 4.3 billion yen with an additional 2.1 billion for distribution. The only movie that out-grossed it in Japan that year was Star Wars, which brought in about ten times as much.

This is where it becomes appropriate to dispel a couple of myths that have sprung up to explain the origins of the Yamato 2 TV series.

Myth #1: Yoshinobu Nishizaki and his staff were completely blindsided by the tremendous popularity of the movie and scrambled to turn it into a TV series in response. Not true. While Farewell did perform wildly beyond their expectations, nobody doubted the viability of a TV version. In fact, it was already well into pre-production when Farewell opened.

Myth #2: Leiji Matsumoto made such a stink about the deaths of main characters in Farewell that Yamato 2 was created to placate him. Also not true. Matsumoto did believe to his core that young people would never throw their lives away and because of that he did refuse to take part in certain stages of the movie’s production, but a TV network does not shift mountains of cash in response to the emotions of one individual–unless that individual happens to run the network.

With those misconceptions out of the way, we can observe what really happened.

Requests to do something new with Yamato on television began as early as the May 24 press conference. According to a 2009 interview with Yoshinobu Nishizaki, the real push to get this started came from Tatsuro Ishida, then the president of Nippon Broadcasting, who personally asked Nishizaki to remake Farewell to Yamato for television. Historically speaking, this would seem to be the type of request one does not turn down. 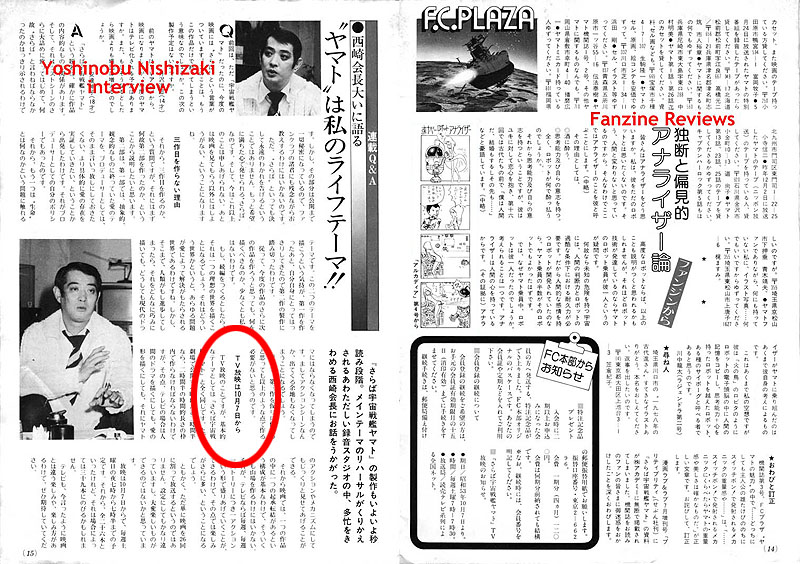 Yamato 2 was officially announced in the fourth issue of the fan club magazine (published June 25, 1978. Read a translation of the announcement here). The new series was being readied for an October 7 debut on the Yomiuri Network, and the run was tentatively set for 26 episodes, though Nishizaki held out the possibility that it could go to 39. The debut date would be pushed back by a week, since October 7 was the 25th anniversary of broadcast giant NTV (Nippon Television), Yomiuri’s major affiliate. 21 stations in the NTV “family” were commited to a commemorative folk music awards program that evening. To avoid competing with this, Yamato 2 debuted Saturday, October 14 at 7pm on 31 stations across the country.

Everything that went wrong for the first series went right for Yamato 2. For starters, it got an immediate boost by inheriting the timeslot of the mega-popular baseball anime New Star of the Giants. There was also a groundswell of merchandising that finally took hold in the wake of Farewell to Yamato. Licensing requests had poured into Academy Studio in advance of the movie premiere, but because of the time lag needed for product development, most did not roll out until the fall. The most important of these were candy and food products from Glico, a toy line from Nomura, and an expanding lineup of model kits from Bandai. There was also an international component; as Yamato 2 was going into production, Yoshinobu Nishizaki signed a deal with New York’s Westchester films to repackage both Series 1 and Series 2 for the English-speaking world. About a year later, US fans would come to know them as Star Blazers.

These were all vital elements that kept Yamato in the public eye through the entire run of the new series, and they paid off in very respectable Nielsen ratings that never dipped below 20% and peaked at 27.7% for the final episode on April 7, 1979. Interestingly, a new SF anime series title Mobile Suit Gundam made its debut that same day on another network. From then on, nothing would ever be the same.

Click on these links to read all about the making of Yamato 2. Each article contains a link to the next article if you want to follow them in sequence. 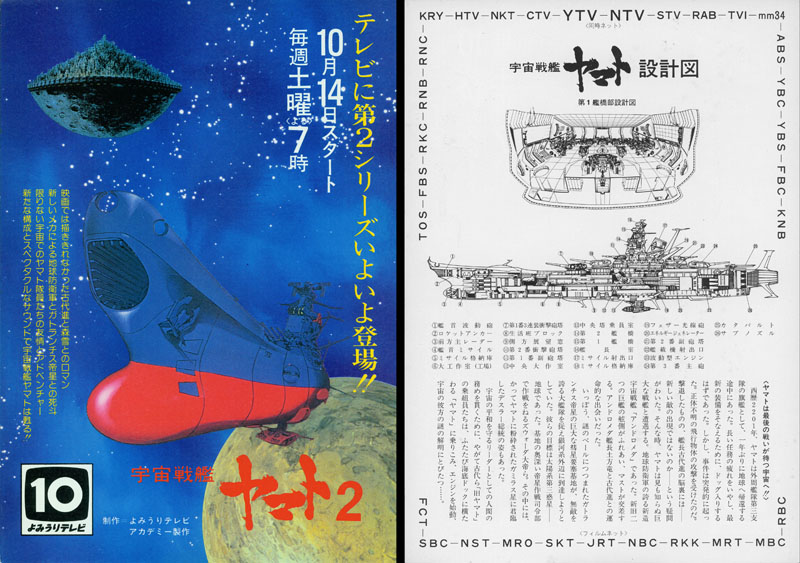 This flyer was distributed in movie theatres (and elsewhere) while Farewell to Yamato was still running, something almost unheard of for a TV series. The channel insignia on the front was different from city to city, depending on the local affiliate. The complete channel lineup was listed on the back (above right).