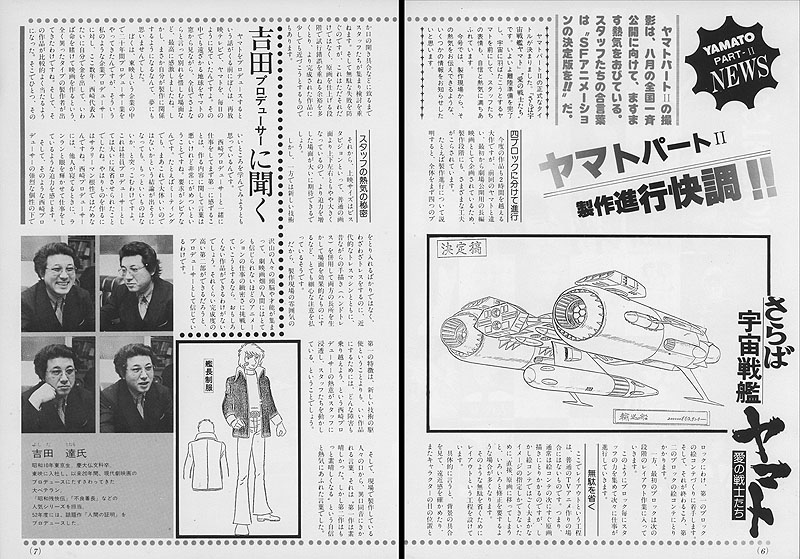 The official title of Yamato Part II has been decided. It is Farewell to Space Battleship Yamato, Soldiers of Love. The preparation for launch is finally complete, and Yamato is ready to fly off into space. Our staff members are overflowing with confidence and enthusiasm. With this issue, we want to convey both information and passion from the production site.

Production is Divided into Four Blocks

This next work is a masterpiece that will exceed two hours, but it is different from the last Yamato since it was planned from the beginning as a feature-length movie for theatrical release. Thus, various devices are applied at the production stage.

For example, the movie is divided into four blocks. The storyboard is begun on the first block, then moves on to the second block. At that point, the first block enters the layout stage. In this way, the power of the staff is concentrated on each block as the work advances in sequence. [Below: the storyboard book for the fourth block.]

Usually, the layout process is nonexistent in the making of TV anime; the drawing of scenes follows immediately after the storyboard. However, because the storyboard is only a very rough image, it often needs many modifications when transformed into a full scene. The layout stage is utilized to streamline this process.

Specifically, the condition of the background is seen and perspective is checked. Also, the staff meets to determine such things as a character’s eye direction or mouth position. This helps to prevent unnecessary mistakes, but there is a lot of room for repeated trial and error as the scene moves to completion.

The Secret Passion of the Staff

The screen size is called Vistavision, which adds more to the sides than to the top and bottom, so you can expect to see greatly increased power in a scene. However, new technology is not just used for its own sake. In addition to a modern tracing machine [which converts a pencil layout to an inked cel], traditional freehand tracing is also used to keep the good points alive and make a scene more effective. Very close attention is paid to this.

Therefore, rather than the use of new technology, the main characteristic of the production atmosphere is the determination to overcome any obstacle to do good work. The enthusiasm of Producer Yoshinobu Nishizaki permeates and motivates the staff. Those on the scene are full of passion and enthusiasm, and the word from their mouths is unanimous: “the first film was wonderful, but the second will be even better.”

An Interview with Producer Itaru Yoshida

Born in Tokyo, 1935. Graduate of French Literature Course at Keio University. Longtime veteran of Toei, engaged as a producer of live-action films for 20 years.

Before I began to produce the new Yamato story, I watched the series almost every day in TV reruns. I was moved by the bet scenes, including the one in which all the crewmembers say goodbye and watch the Earth recede in the window. I never dreamed that I could possibly become involved in the production.

I have been a business producer for twenty years at Toei Studio, but in that time quite a different kind of producer has emerged, represented by Yoshinobu Nishizaki who takes his life into his own hands, so to speak, in order to make a movie. His work has done well, so I hope that we can try and learn good things from it.

I will describe my feelings about working with Mr. Nishizaki, but I have to grasp for words that might sound bad. It is severely demanding. For example, in any meeting even if the conclusion is that a certain idea is good, there is still a push to find a better one. This is what I reflected upon the most as an employee producer.

A typical salaryman begrudges these conditions, but I feel such force from Producer Nishizaki that it wakes me up and pushes me past my limits to do the job. The many people whose minds and talents gather around his strong personality cannot help but make incredible work that challenges the field of animation. It is my belief as a producer that when Part 2 is completed, it will achieve at least that much.