This was an in-between month for anime magazines in Japan, all of which came with September cover dates.

The big summer movies (Ideon, My Youth in Arcadia, and Space Adventure Cobra) had played themselves out, and the next big crop (Harmagedon, Crusher Joe, and Final Yamato) was seven months in the future. Though some high-profile SF anime was on its way for the fall (Macross and Endless Road SSX), there wasn’t anything new to promote on TV. Thus, a lot of shows-in-progress got a much bigger spotlight than usual: Urusei Yatsura, Fairy Princess Minky Momo, Godmars, Acrobunch, Xabungle, Dougram, and Baxinger among them.

That also made it a fantastic month for Final Yamato coverage, especially with Animedia joining the fold, which meant that fans now had four streams of information every month all the way up to the premiere. And in the even-numbered months (like this one) there was a fan club magazine to boot.

Each had something unique to offer Yamato fans this time, with Animage earning the crown for both page count and quality (despite a cover that was about as far from Yamato as you could get). 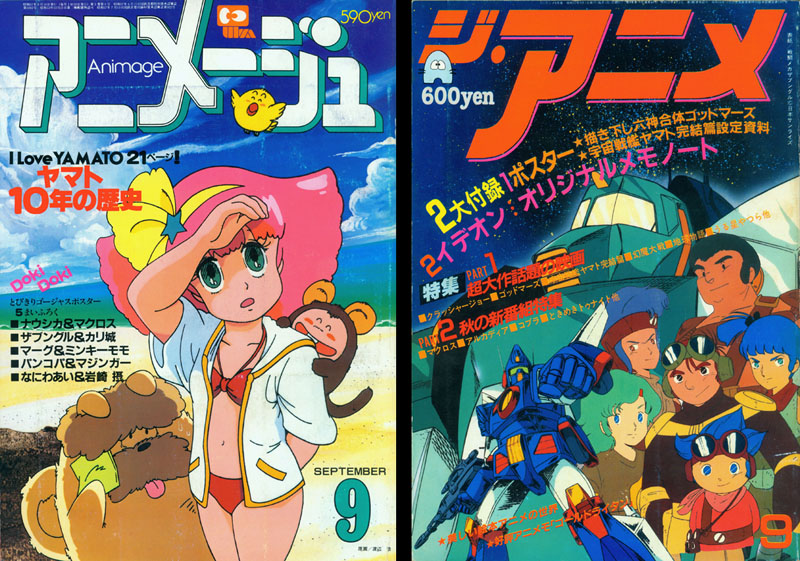 Contrary to the Minky Momo cover, Yamato was the dominant story this issue with a record-setting 21 pages. Other highlights were a bound-in booklet on Hayao Miyazaki’s work for Famous Detective Holmes and tantalizing previews of Crusher Joe and Macross.

The Yamato feature, titled Ten Years of History, was split into three parts. 8 pages were spent on Final Yamato with new artwork, including a custom spread made just for the magazine. 8 more covered the whole history of Yamato under the title “Record of Glory” with trivia-packed commentary from staff members. The last 5 pages were filled with Final Yamato design work and one of the most candid and thought-provoking Yoshinobu Nishizaki interviews on record.

(Each is linked to the next for continuous reading) 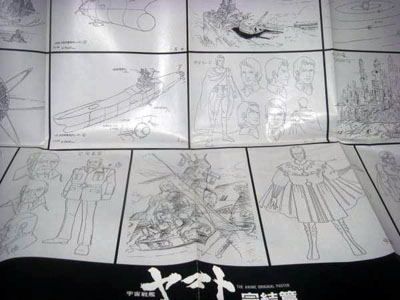 Sporting a Battle Mecha Xabungle cover, this issue lead with the biggest article yet seen on Crusher Joe and another on Godmars. Also prominent were early looks at Harmagedon and Endless Road SSX, the TV followup to My Youth in Arcadia. Four pages showed off early design work for Macross (just two months away), and a bound-in booklet for Ideon kept the love alive now that the movies had run their course.

The five-page Yamato article was titled “The History of Yamato Music,” an interview with Yoshinobu Nishizaki that focused on his views of music’s role in anime and what made Yamato music tower over all its competitors.

Also included was the first Final Yamato poster to feature animation designs direct from the studio (partially shown above). 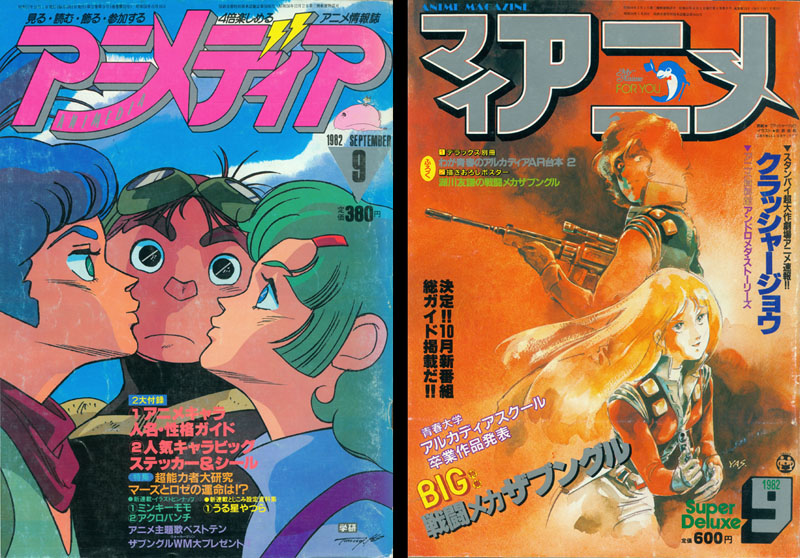 This was just the 14th issue of Animedia, which had run only a single Yamato article before this one, exactly a year earlier. (See it here) Xabungle made the cover, but Godmars was the issue’s top story with a detailed look at the characters.

The most noticeable difference between this magazine and the others was that Animedia was saddle-stitched rather than squarebound, which meant its color features weren’t limited to the front of the magazine. There was something reassuring about getting to the end of the color coverage in the front half and knowing more was to be found in the back. Case in point, the 5-page Final Yamato article in this issue.

Since it was Animedia‘s first look at Final Yamato, they interviewed Yoshinobu Nishizaki and wasted no time in drilling down on the big questions, such as why and how Captain Okita was being revived. The result was Nishizaki’s clearest and most concise description of this premise and the others that drove the story.

This was the first issue of any anime magazine to sport a Crusher Joe cover. The movie was seven months away, but any image by the great Yasuhiko Yoshikazu was guaranteed to grab the eyeballs. Both Joe and Xabungle got up-front articles, the summer movies got one last look, and the first interview for Endless Road SSX could be found right behind the Final Yamato article.

This was an odd one; it included unique watercolor paintings by Final Yamato‘s art director, Kazuhiko Udagawa, that never saw the light of day again. It’s likely they were created specifically for the magazine, which would have been quite a coup at the time. Another oddity was that for some reason most focused on scenes that would ultimately be cut from the film – which could explain why they were accompanied by relevant passages from the newly-completed screenplay.

A brief essay by Yoshinobu Nishizaki explained the philosophy of the story in terms not seen elsewhere, even in the Yamato Fan Club Magazine, which is where his more eclectic musings tended to go. 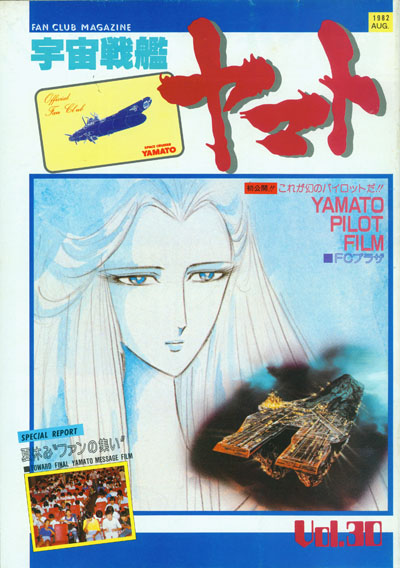 This is another case where the publishing date of the club magazine is thrown into question by the content. The top story was an inside look at the Fan Gatherings, a series of club meetings across the country that took place from August 9 to 30. That would make it slightly difficult to actually get the magazine out on August 25, but that’s what it says in the publishing info.

Regardless, the article provides a heartwarming overview of what seemed to be both an exhilarating and exhausting experience for the fan club staff. Secondary to this was a truly unique four-page transcript of the Yamato “Message Film,” a direct communiqué from the Final Yamato staff about the movie they were currently working on. This is the only surviving record of that film, which hasn’t been seen since the month it was shown. Two further pages (below) showed off some new Final Yamato design art with excerpts from the story outline. 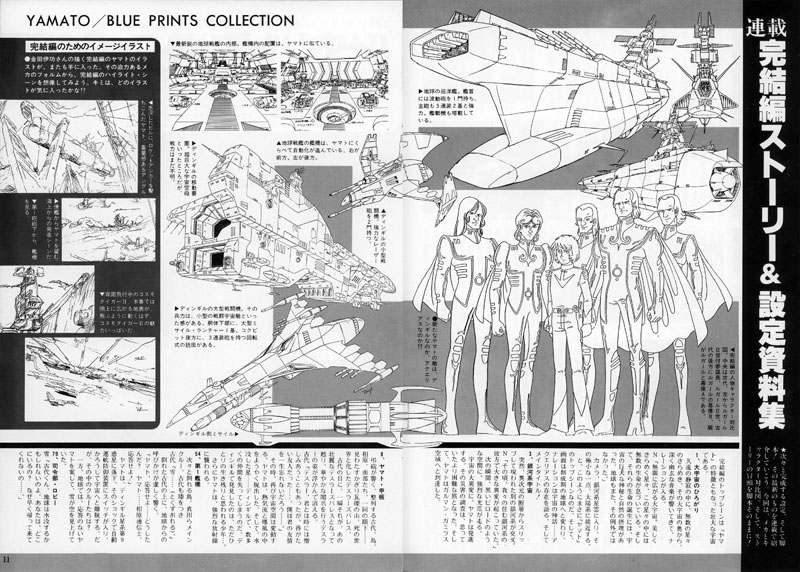 Continue to September 1982: the six-month countdown begins, the Queen of Aquarius is revealed, and Animage does it again with the handy-dandy Yamato Dictionary.