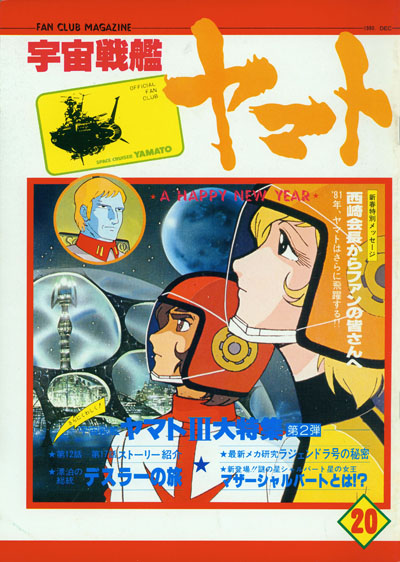 Upon entering the new year of 1981, a message to the fan club from Chairman Nishizaki, who is busy with production on Yamato III!!

From Chairman Nishizaki to you in the new year of 1981

Congratulations on the new year!

I wish you a happy new year 1981. Dear members of the Space Battleship Yamato fan club, I think 1980 was a good year. Let’s try our best to make ’81 an even better one.

Last year was very busy, with the exhibition of Be Forever Yamato and the broadcast of Yamato III. I received many letters about those two works. Truly, I thank you very much. If you think about it, the seven years since the broadcast of the first Yamato series have gone by too fast.

Both of the main characters, Susumu Kodai and Mori Yuki, have grown up in our works. In the first series, the story was full of great dreams and romance under the theme of “the life and love of humanity.” In Farewell, I presented another form of “love.” Be Forever said to everyone that “love is born of trust.” Two months after the closing of Be Forever, Yamato III started with a completely new concept. 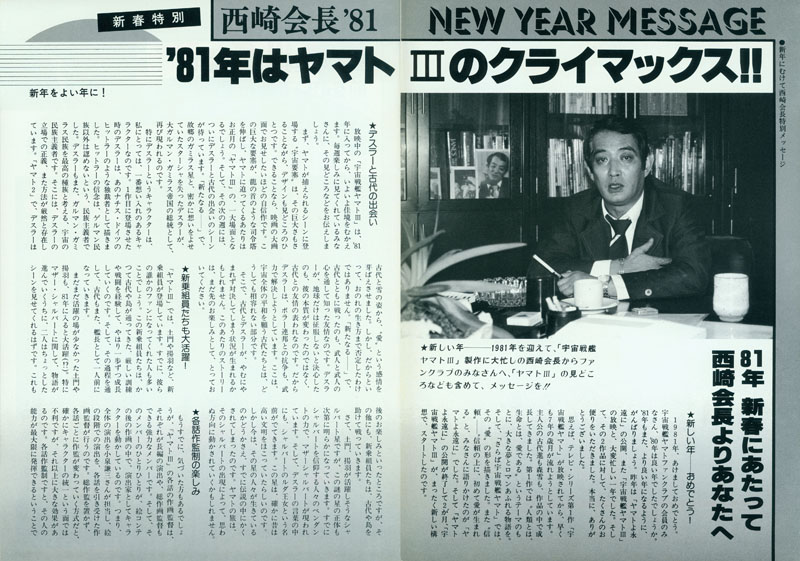 The encounter of Dessler & Kodai

Space Battleship Yamato III finally reached a climax after the beginning of ’81. For everyone who looked forward to it every week, let’s examine the highlights.

First, the “space fortress” that appeared in the scene of Yamato‘s capture; in addition to its enormous size, its design is one of the highlights. I’m so confident in it that I would show this work on a big screen if it were possible. The conning tower of the fortress extends like the neck of a dragon, and it will be a big hit scene as Yamato III approaches the new year.

Then, the following week, the scene of Kodai’s encounter with Dessler will be waiting at last. Dessler, who lost both his home planet Gamilas and his secret love Starsha in The New Voyage, appears again as the Emperor of the Galman-Gamilas Empire.

For me, Dessler is the one character in particular into whom I put the most thought. When he appeared in the first series, he was presented as a dictator, like Hitler in Nazi Germany. Hitler was a nationalist whose beliefs would not accept anyone but the German people. Dessler is a nationalist of space, who considers Galman-Gamilas to be the highest race. Dessler rules with authority and a strict method of justice.

From the figures of Kodai and Yuki in Yamato 2, Dessler felt the rise of “love.” But even so, he did not deny his own way of life. When he fought alongside Kodai in The New Voyage, it was a friendship between the hearts of two warriors. Dessler’s essence did not change, but after his manifestation of friendship with Kodai he decided not to conquer Earth. Therefore, Dessler tries to solve his conflict with the Bolar Federation through military power. It is absolutely incompatible with Kodai’s wish for peace in all of space.

Therefore, a confrontation between Kodai and Dessler may be born out of necessity. Please enjoy this part of the story.

In Yamato III, new crew members have appeared, such as Domon and Ageha [Jason and Flash]. There are probably already many people who have become a fan of someone. This new crew experiences the severe training and battles Kodai and Shima went through, and is growing one step at a time. And through the process, Kodai has become a full-fledged captain.

Ageha and Domon have seen only a little action so far, but will have a lot of activity in 1981! As the Mother Shalbart story progresses in particular, these two will have a lot of scenes. In addition, the other members of the new crew will help Kodai and Shima in their fight. And as Domon and Ageha play an active part when we reach Shalbart, the real nature of this mystery planet gradually becomes clear.

Mother Shalbart appears by the power of the pendants held by those who believe in Shalbart. And, in the words of Dessler, the name Princess Ruda of Shalbart comes out. In the old days, this planet seemed to take pride in its high civilization. However, the existence of people from that planet is now hidden in legend. Depending on the appearance of Shalbart, Yamato‘s journey may move into an unexpected direction.

The pleasure of each episode’s production

As many people have already noticed, the animation director of each episode of Yamato III has made feature films and is a strong supervisor. After drawing storyboards, each of them has animated characters as a director.

In other words, Kenzo Koizumi is responsible for the overall direction, but the animation director in charge of each episode performs the actual picture production. Rather than producing an entire series with one method, the production methods change with each episode, and though it certainly has a disadvantage in terms of unifying the characters, there is a larger effect. This system of production demonstrates each person’s ability to the maximum.

Though some people say the patterns and characters should be efficiently unified, I think it’s more important to take advantage of the art and create animation that is alive.

The people involved in the production have the ability to monitor the quality of each episode. Those who take care of their episodes one at a time put all their power into their work on Yamato III, and I think it makes the animation better than ever.

By all means, I want you to look forward to who does the production for each episode. 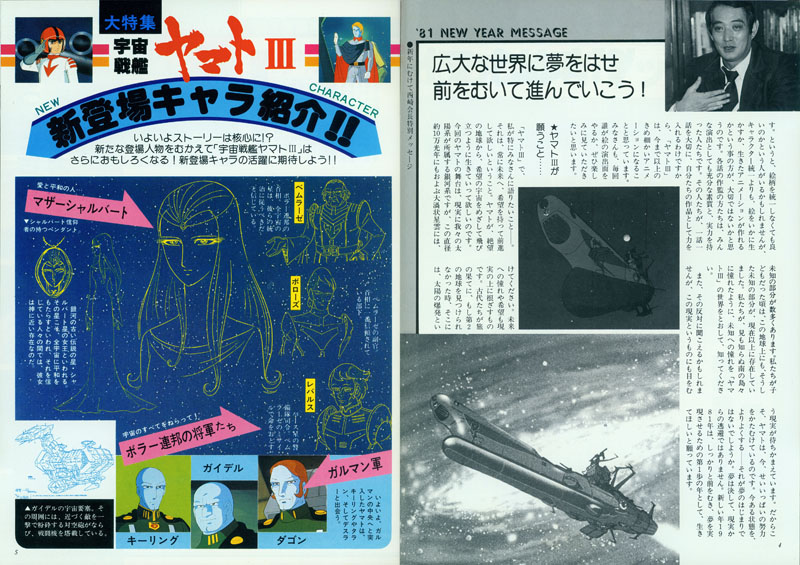 The hopes for Yamato III…

The thing I especially want to say to everyone with Yamato III is my desire for you to always move forward with hope for the future. From an Earth of despair, I want you to fly off with Yamato toward an outer space full of hope.

The stage for this Yamato is the galaxy that our solar system really belongs to, the huge spiral nebula stretching 100,000 light years across with many unknown parts. When we were children, there were more unknown places on this Earth than there are now. As we yearned for an unknown island in the south, please know the longing for the unknown in the world of Yamato III. Also, though it may seem contradictory, please turn your eyes to what we call reality.

A yearning and hope for the future are rooted in reality. If Kodai cannot find a second Earth by the end of the journey, then the reality of the sun’s explosion awaits there. That’s why Yamato makes as much effort as possible now.

Making things better than they are now–this is the beginning of a dream. The dream is never an escape from reality. As we firmly face the new year 1981, I hope it is the year you will take the first step toward realizing your dream. 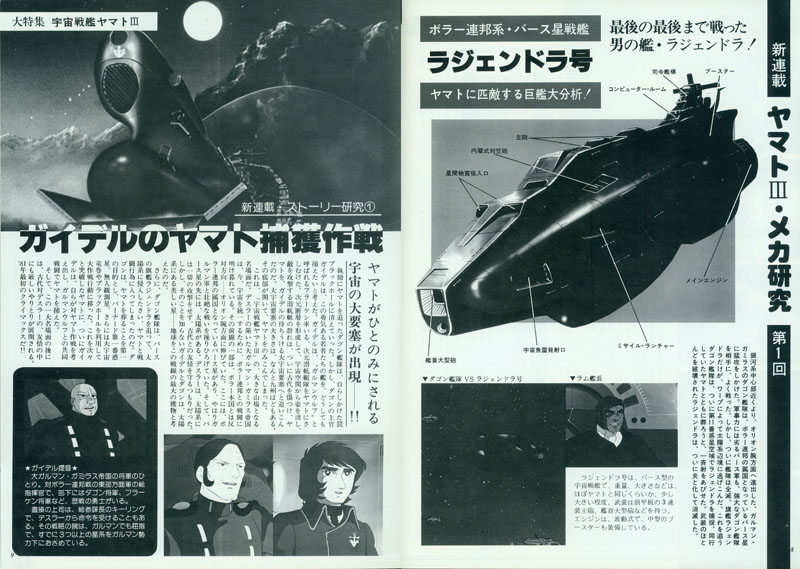 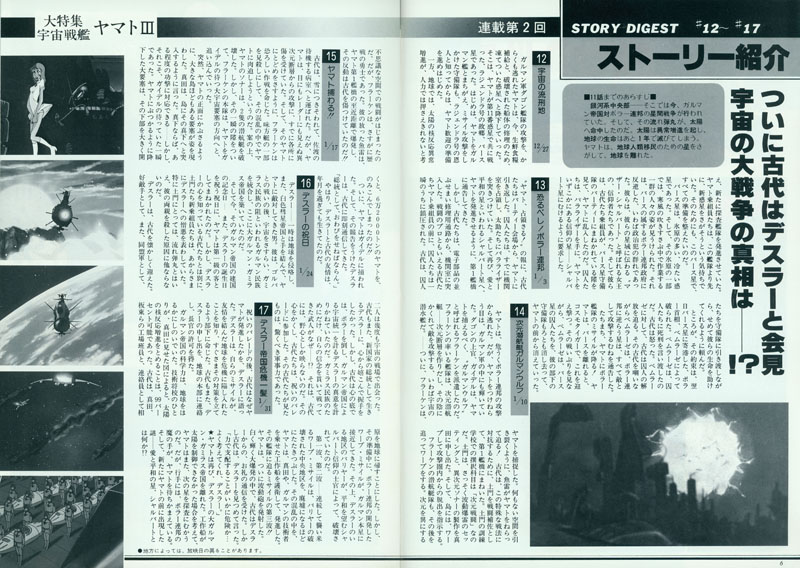 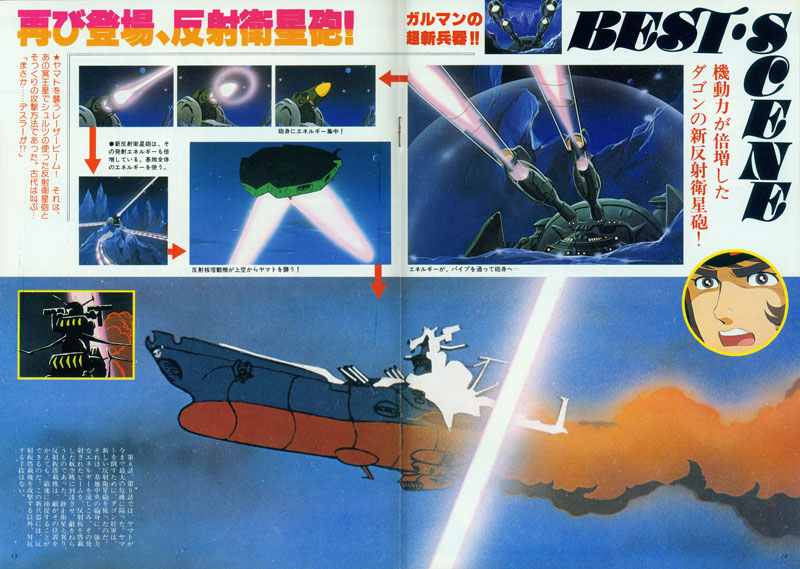 Scenes from Episodes 8 and 9 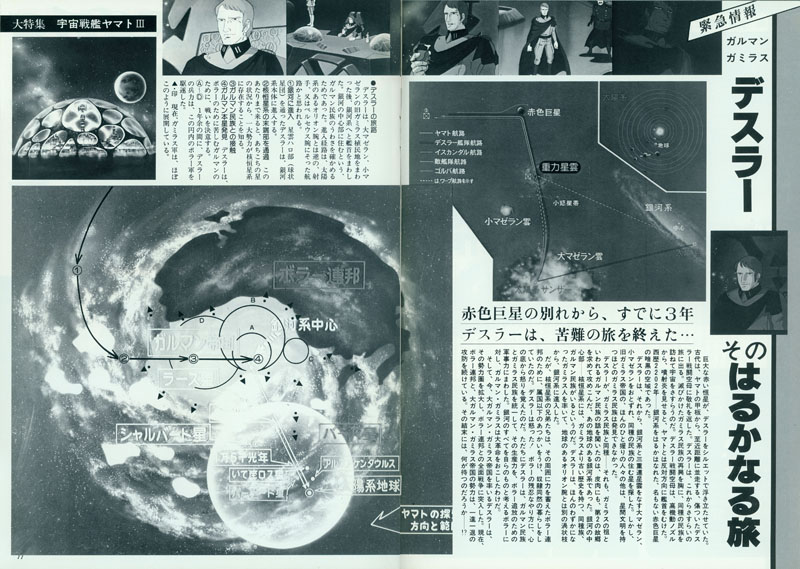 Already three years since parting at the Red Giant, Dessler’s journey of hardship…

The huge Red Giant star bathed Dessler’s silhouette in its glow. Traveling in close parallel on the deck of Yamato, Kodai returned a salute toward Dessler’s damaged battle carrier.

From there, Dessler embarked on a wandering journey. Faced with the fall of the Gamilas race, he wandered space to find a similar people.

Flame flared from the high mobility nozzle of Dessler’s battle carrier as its bow turned away from Yamato. In the year 2202, it departed the galaxy from the dark airspace of the nameless red giant star.

Since a triple nebula is formed by the Milky Way and the Magellanic Clouds, Dessler visited the Small Magellanic Cloud to look for a planet with a similar race. However, other than a small handful of people from the old Gamilas Empire, they were not able to discover an interstellar civilization like the Gamilas race.

Dessler heard the story of the Galman race, a similar ethnicity said to be the father of Gamilas. Ironically, it was said to be within the galaxy of Earth, which had been invaded in the search for a second home. It is said that the Galman are located in a solar system at the center of the galaxy, the same race as Gamilas but with an older history,

Dessler lead the few remaining Gamilas people into the galaxy through a different spiral arm than the Orion arm which contains Earth. However, the solar system of their brethren was surrounded by the powerful Bolar Federation and was reduced to a slave state.

Dessler was outraged! He felt anger at the cruelty of the Bolar from the bottom of his heart. Dessler immediately unified the Galman and Gamilas races and turned their productivity toward military strength to drive out the Bolar enemy.

To the Bolar, who regard the entire galaxy as their own, Galman-Gamilas caused a great revolution. Dessler now commands the huge Galman-Gamilas Empire and, by expanding its sphere of influence, rushes toward all-out war with the Bolar Federation.

At present, the huge forces of the Bolar Federation and the Galman-Gamilas Empire shift back and forth between offense and defense. What awaits at the end!? 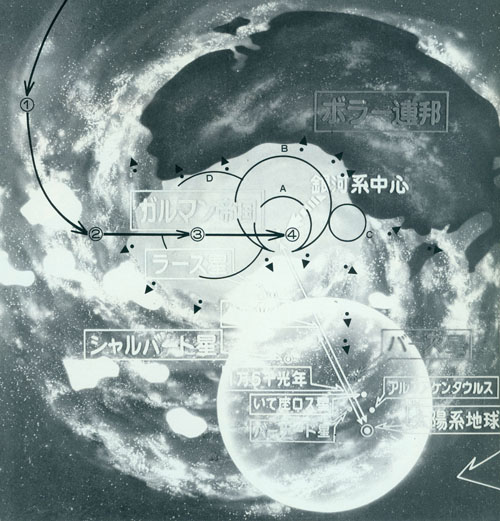 The Journey of Dessler

After Dessler explored the former Gamilas colonies of the Large and Small Magellanic Clouds, he turned back toward the Milky Way Galaxy. This was done to investigate rumors of the Galman race living in the galactic center. His approach path is believed to be Perseus spiral arm, on the opposite side of the Orion arm which contains our solar system.

Dessler passes through the Halo Nebula (a globular cluster) into the main body of the Milky Way.

(2) Crossing over into the core solar systems

Arriving in this area, based on the situation of planets here and there, a major force is detected in the core systems.

Dessler decides to fight for the Galman people suffering under Bolar.

A~D: Over the course of one year, Dessler’s military power expelled all the Bolar foces in this circle. At present, the Gamilas forces develop along these lines.