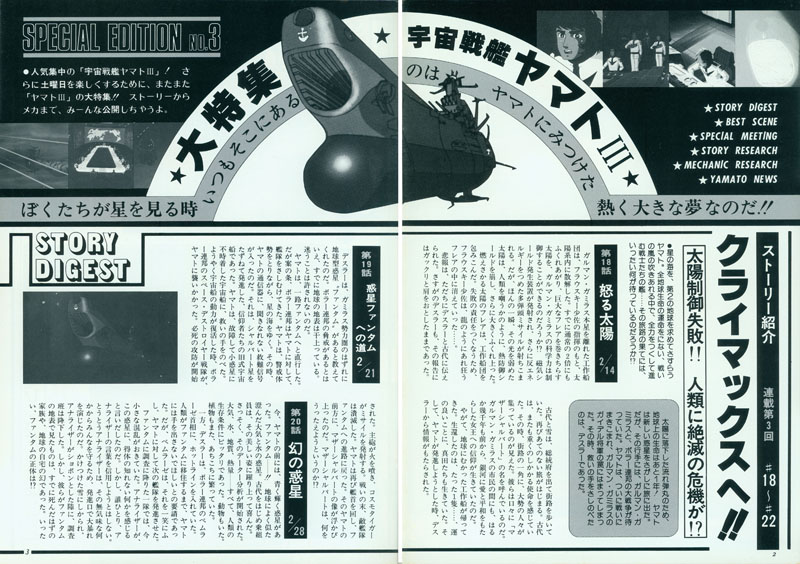 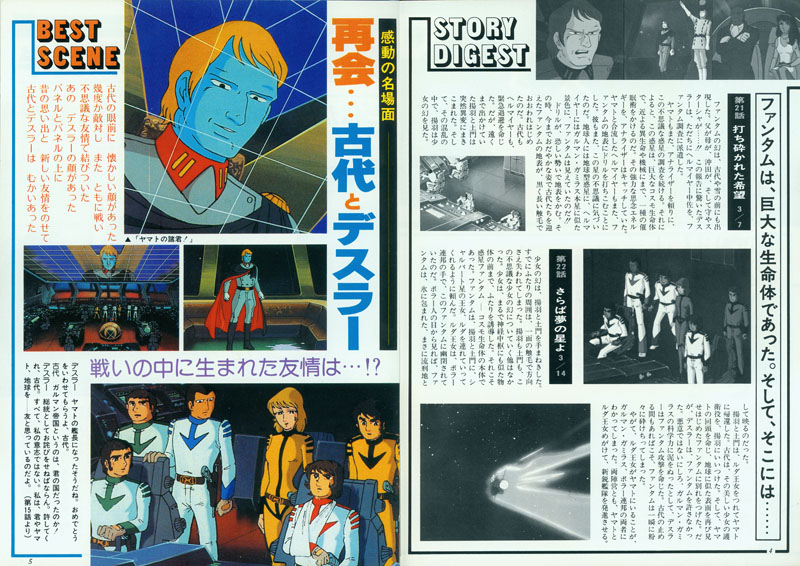 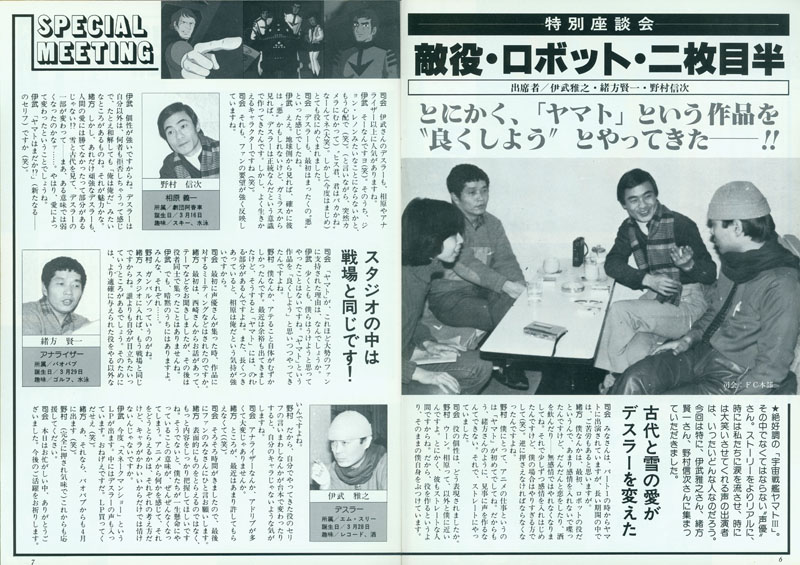 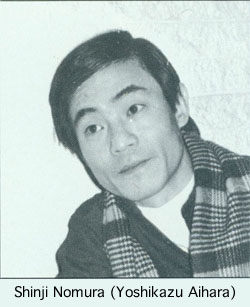 And so, we set out to make this Yamato thing a “great” production!

Yamato III is in top form. The “voice actor” is an indispensable part of it. We wonder what kind of people have voices that cause us to shed tears and roar with laughter. This time in particular, Mr. Masayuki Ibu, Mr. Kenichi Ogata, and Mr. Shinji Nomura come together.

The love of Kodai and Yuki changed Dessler

Moderator: Everyone here has appeared in Yamato since part 1, which I think is a long period of hard work.

Ogata: First, speaking from the position of a robot, I spoke without much emotion but gradually fell in love, and I drink alcohol sometimes–it becomes impossible to do it without feeling. So I’ve begun to put a little more emotion into it, and in my case I may have gone too far. (Laughs) Conversely, it’s reached a point where I have to restrain it.

Nomura: As for me, Yamato was my first work in anime. Therefore, it wasn’t possible to do a voice as well as Mr. Ogata. So I played it straight.

Moderator: How did you express the personality of your role?

Nomura: Hmm…Aihara is exceptionally close to me. It’s because he’s a straight man anyway. So rather than creating a role, I played it as myself.

Ibu: That’s true. (Laughs) I’m worried that he may become like John Lennon before long. (Laughs, then suddenly turns toward the camera) “Hisu, you’re an idiot,” right? (Big laughter) However (turning serious), I’ve been very blessed with the role. 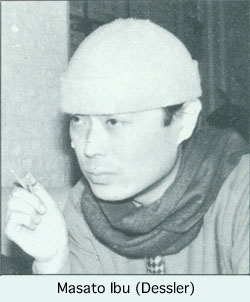 Moderator: Dessler really had a feeling of “evil” at the beginning.

Ibu: Yes. Viewed from the Earth side, he might certainly be “evil,” but from the Gamilas perspective, I’ve been conscious of making Dessler legitimate. However, it is a character that resurrects well. (Laughs)

Moderator: It strongly reflects the demand of the fans.

Ibu: Because he has a strong personality. Dessler’s the sort of guy who rejects anyone aside from himself. Even when he compromises, there’s still this sort of “I am who I am” aspect that he keeps. It is appealing.

Ogata: However, despite Dessler’s stubbornness, isn’t there a part of him that was won over by the love of human beings? In seeing Yuki and Kodai, Dessler was changed. I wonder whether he became weakened in a way, but after all I guess he was changed by love.

Moderator: What is the reason Yamato is supported by so many fans?

Ibu: It’s not because we expected it. We set out to make this Yamato thing a “great production.” That’s what we thought about.

Nomura: For me, it’s hard to guess. We’ve seen a lot of it coming out lately, and when you get into it there are a lot of parts of Yamato to like. Also, I get a strong feeling for Aihara after keeping company with him for so long.

Moderator: When the voice actors first got together, what sort of work was carried out?

Ogata: In the beginning there was a conversation with Mr. Nishizaki about the theme, but then I didn’t meet with the other actors.

Ibu: But there was an implicit feeling. Each and every one of us…

Nomura: We would do our best.

Ogata: When you enter a studio, it is like a battlefield. At some level, you want to attract more attention than anyone else. There is no way to do it other than to perform your role with more precision. 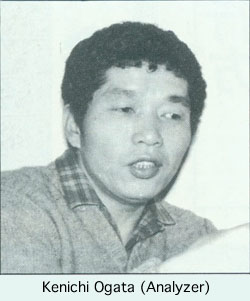 Nomura: Therefore, if the way you would express a line is different from what’s written in the script, I feel like that’s not my character.

Ogata: However, I haven’t been allowed much of it these days. (Laughs)

Moderator: We’re running out of time, so I’d like you to say a word to the fans before the end.

Ogata: I don’t capture things superficially, so I’d like you to grasp the content more firmly. Otherwise, the meaning of what we work so hard on will be completely lost. Whatever people feel from an anime, what they take away from it, will vary from person to person, but it’s kind of pathetic if all they get is that “the characters are cute.”

Ibu: A new Snakeman Show LP is coming out. It includes the voice of Dessler. Pretty please, buy the album. (Laughs)

[Translator’s note: Snakeman Show was a popular comedy trio which included Ibu as a member.]

Ogata: Oh, then it comes out from Baobab in April. (Laughs)

Nomura (completely losing ground): Please support us in the future!

Moderator: Thank you very much for your time today. I wish you success in the future. 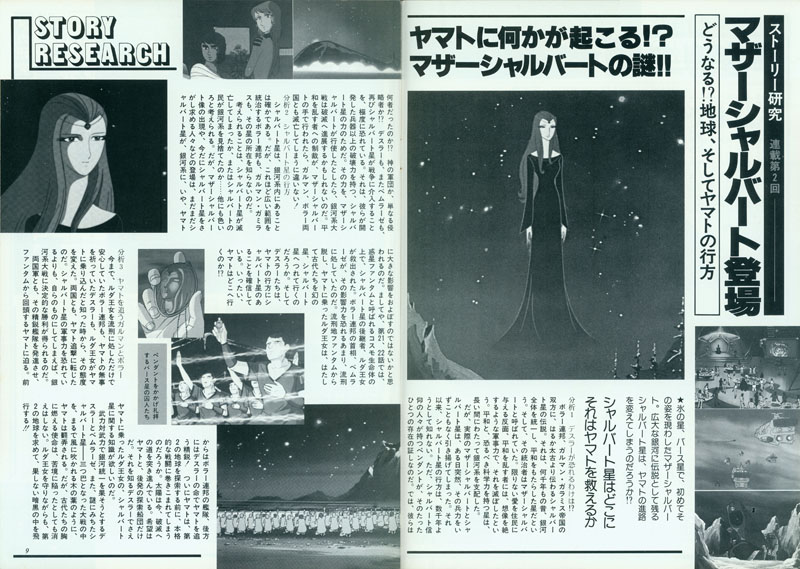 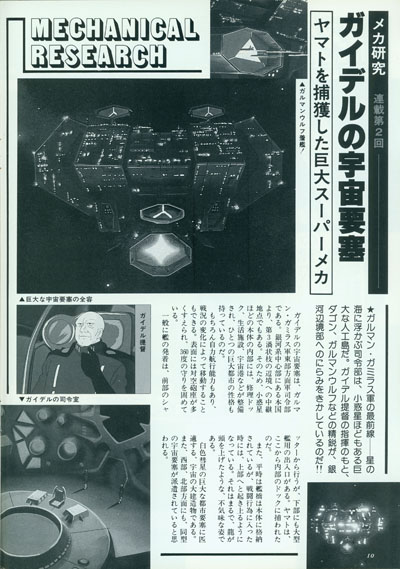 The headquarters that floats on the front line in the sea of stars is a huge artificial island, somewhat like an asteroid. Elite soldiers like Dagon and the Galman Wolf, under the command of General Gaidel, use it to cast their glare across the frontier of the galaxy!

The space fortress of Gaidel is the military headquarters of the Galman-Gamilas Eastern Task Force. It is a staging post between their home in the heart of the galaxy and the frontier of the third spiral arm. Therefore, within its asteroid-like body is a repair dock, living facilities and a space harbor, which maintain the characteristics of a huge city. Of course, it has its own navigation capability and can move at the demand of a war situation.

Many anti-aircraft guns cover the surface, which can defend it over a full 360 degrees. Arrivals and departures of ships are generally performed from the front shutter, but there is a large port on the underside as well. Yamato was caught in an internal dock there.

Also, the bridge is stored within the body during peacetime, but rises up during battle action. It is a strange sight, like a dragon raising its head. It is a huge fortress city in space, not unlike the White Comet. It is also assumed that the same type of space fortress has been sent to the Southern, Western, and Northern task forces.