When Space Battleship Yamato III came to a premature end on Japanese TV in April 1981, Producer Yoshinobu Nishizaki had a lot of time on his hands. Had everything gone as planned, the series would have run a full year and kept his company busy through October…but sour ratings changed all that even before the close of 1980.

As the Yamato III Time Machine revealed, this news didn’t go public until the series was nearly over; everyone who had expected to keep watching Yamato every week for most of 1981 were set adrift just like Nishizaki himself. But whereas anyone else might have walked away, Nishizaki dug right into the plan he’d kept in his back pocket from the beginning of Yamato III–to make one more feature film that would top them all.

This plan was no secret; Nishizaki had first let it slip in an interview with Animage magazine published a month before Yamato III went on the air. But he withheld the title of this project for several months, finally divulging it June 1981 in the pages of the Yamato Fan Club magazine. And it was a title devoid of ambiguity: Space Battleship Yamato Kanketsu-hen [The Final Chapter].

That title alone conveyed the scope of the story; a grand, concluding voyage to bring the almost decade-long saga to a close. Though it was initially announced for release in 1982, it would prove more difficult and time-consuming than everyone thought to capture on film.

The purpose of these Time Machine collections is to preserve a record in English of how the field of anime journalism was born, grew up, and matured with Yamato as its driving force. We’ve seen new magazines appear as the anime boom expanded, competing with each other to produce better and more detailed coverage. With The Final Chapter (also occasionally referred to as Final Yamato), everyone had the chance to track a Yamato project from its first moment of development. Nishizaki welcomed it, wanting the fans to have an active role in deciding the course of Yamato‘s last journey.

The result of this openness was more media coverage than any other Yamato film to date, and it all starts here. 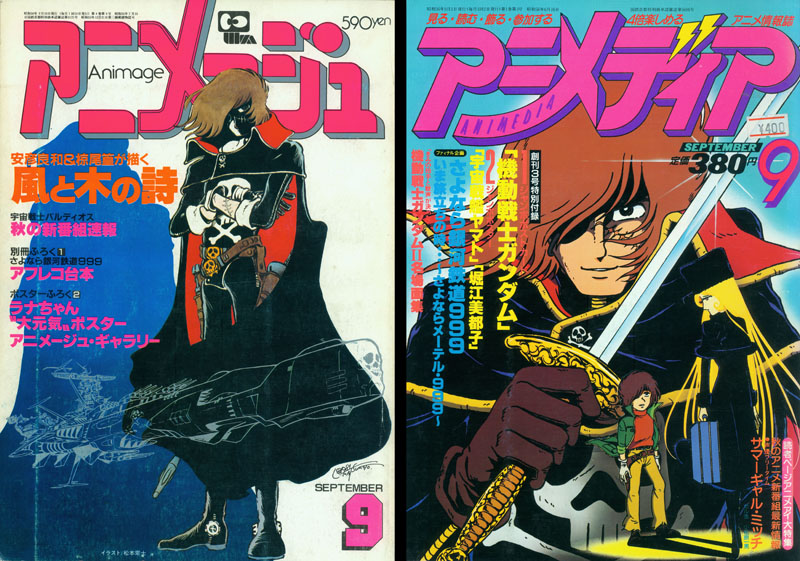 As recounted in Part 2 of the Yamato III Time Machine, Animage ceased their coverage of the series several months before it ended, and didn’t resume a regular Yamato beat again until summer 1982. This issue was somewhat of an exception, running an in-depth retrospective of action SF anime titled Changes in Battle Scenes. Over 15 pages the article examined how anime fighting action had evolved from Astro Boy all the way up to the present day with cutting-edge titles like Mobile Suit Gundam. Production staff members gave brief commentaries on how they approached the demands of battle scenes and what strides were made on film and TV. Space Battleship Yamato was the only title to get a double-page spread, which can be seen and read here.

Animedia was a fresh arrival on the scene in 1981. The first issue was published June 10 (with a July cover date), and they welcomed Yamato into their pages with this third issue. The occasion was a revival of the films on Nippon Television; the first movie was broadcast on August 12, The New Voyage followed on the 15th, and Be Forever Yamato saw its TV premiere on the 19th.

The magazine covered this event with a lush, 7-page article that profiled each film and concluded with a forward-looking message from Yoshinobu Nishizaki. See the article here. 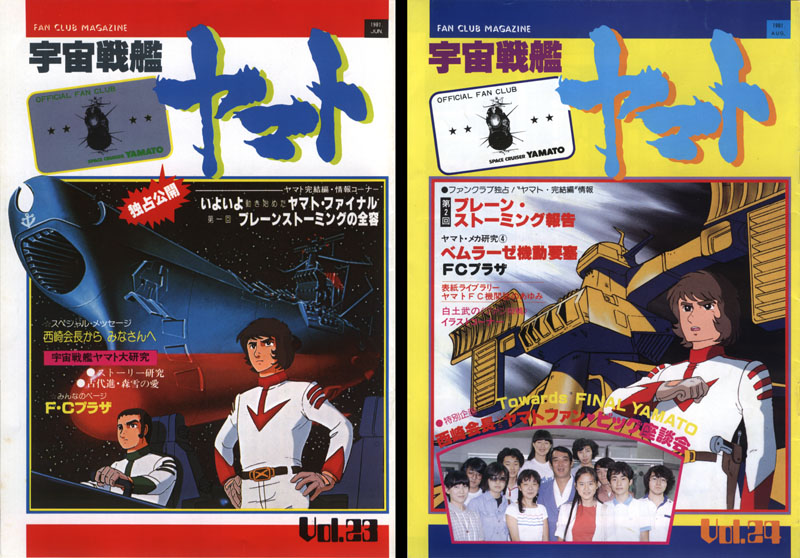 The first publication of any kind to chart the development of Final Yamato could only have been the fan club magazine, since no one else had as much direct access to the nerve center of Space Battleship Yamato. This was the issue that kicked it off with a typically candid essay from Producer Yoshinobu Nishizaki, in which he made no bones about how daunting it was going to be. He made a puzzling announcement about Star Blazers in America (saying it was new to TV when it had already been running since fall 1979) and made mention of a fan club outreach program that would end up taking another year to mount.

The bulk of issue 23 was devoted to fan contributions and retrospective articles, but the one genuinely new piece was a transcript of the first brainstorming session for Final Yamato, in which Nishizaki and three of his writers began to puzzle out how to end the saga of a lifetime.

Read both the essay and the brainstorming article here.

This issue was unusual for a couple of reasons. First, it came with a flexi-disc, a thin plastic record titled “Yamato Fan Club Sound Gift,” which featured spoken messages from Nishizaki and members of the music staff thanking fans for their continuing devotion. Second, it made good on Nishizaki’s promise to turn fans into active participants in Final Yamato; the lead article was a 7-page account of a discussion between him and 11 hardcore Yamato fans at club headquarters. Each had something unique to say about their love of Yamato and what they wanted to see in the finale.

Also included was a continuation of the writers’ brainstorming transcript and a “leftover” article about a mecha element of Yamato III.

Read both of these articles here. 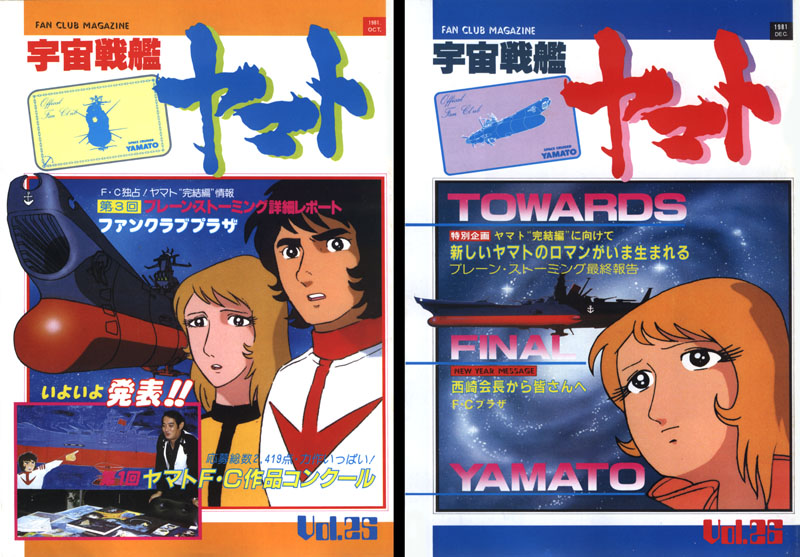 This was another unusual issue, mostly taken up with fan-made contributions that had been solicited months earlier. It served to showcase the immense creativity Yamato could inspire in multiple categories; art, design, modeling, writing, poetry, and music composition were all represented with comments from staff luminaries such as Eiichi Yamamoto, Hiroshi Miyagawa, Leiji Matsumoto, and others.

More directly relevant to this collection, though, was the third and final transcript of the writers’ brainstorming session for Final Yamato. Read it here.

The year 1981 closed out with issue 26, which nicely summed up how far the staff had come since development began in May. Nishizaki’s new year essay was much more ebullient than his previous one in issue 23, as good an indicator as any for the positive progress that had been made. At this point it was still assumed that Final Yamato would be released in 1982, but there was a hint that it might be delayed. (Which it certainly was.)

As indicated by the cover, “Towards Final Yamato” was the overall theme of the issue. It was broken up into three sections under the subheading “Birth of a New Space Legend.” Section 1 was a summary of the saga so far, Section 2 was an analysis of the brainstorming session with speculation on where the story would go, and Section 3 contained comments from staff members who had been brought on for pre-production.

Click here to continue to the next phase of the story, The Making of Final Yamato.