Yamato music has always been one of the most popular aspects of the Series. Wave after wave of LPs (yes, the old vinyl kind) were released during the heyday of the late 70s and early 80s in conjunction with each new series or film, not to mention various spinoff albums in between. Oddly enough, despite the countless hours of recordings that were made available, a large body of background music (hereafter called BGM) was left out.

In September 2000, this oversight was finally corrected by Columbia Records with the debut of the Space Battleship Yamato “Eternal Edition” CD collection. For many fans, it was a ticket to ride through a whole new neighborhood of “Adventure Roman.” It’s also worth noting that this series was so successful that Columbia subsequently launched “Eternal Edition” sets for such other classic fan-favorites as Captain Harlock, Galaxy Express 999, and Mazinger Z.

This first set is a double-CD starting with “file number zero,” the Symphonic Suite Great Yamato. It’s partially an updated version of the 1977 Symphonic Suite Yamato that delves deeper into the saga, and partially an “image album” for Leiji Matsumoto’s Great Yamato manga spinoff. (“Image albums” were another advent of the Yamato era, with music inspired by, rather than written for, a given anime program.) The other CD in this set, “file number one,” is a perfect compilation of music from the first TV Series, including numerous tracks that were never before published. The only notable exception is the tribal music played by the bee people in episode 16. See the entire Series 1 discography here.

FILE No. 2 and 3: Farewell to Space Battleship Yamato in the Name of Love

The second set is entirely devoted to Farewell to Yamato, and a more complete soundtrack collection simply doesn’t exist. These two discs feature every single track from the movie in order of appearance, even if it appears more than once. You can actually feel something creeping up your spine when you hear the long, slow build leading into track 1, and if you’re not moved to tears by the ending song, you just haven’t seen the movie enough times. As an added bonus, there are a handful of very energetic concert tracks at the end of the second disc. These are the Yamato pieces from the 1978 live album The World of Hiroshi Miyagawa. See the entire Farewell to Yamato discography here.

This is the first individually-packaged CD in the set, and it’s another wonderfully perfect BGM collection, this time for Series 2. As with Series 1, many of the tracks were never before published, although if you’ve seen Series 2 over and over, you’ll find that they were living in your head all along. It’s interesting to note that a piece of music was created for Star Blazers Series 2 that was never heard in Yamato 2. It’s the funky Comet Empire techno-club piece that you can hear while Princess Invidia is gloating at Talan. (For better or worse, that piece appears to have gone the way of the bee people music.) See the entire Yamato 2 discography here.

FILE No. 5 and 6: The New Voyage and Be Forever Yamato

This is another double-CD set focusing on the two movies that comprise both encounters with the Dark Nebulans. Prior to this release, full and complete soundtracks were unavailable. Instead, the various LPs were part soundtrack and part re-arrangements of music from the film. They included overtures and suites that, for whatever reason, were not brought forward into this release. So if you own or are hunting for those original albums, there is still some variation to be had. The New Voyage CD also contains bonus tracks derived from the 1982 New Voyage/Brave Raideen Choral Suite. See the entire New Voyage discography here and Be Forever discography here.

Like Yamato 2, this is another single-CD package, and of all the discs in this set, this is the only one with glaring omissions. Anticipating a series that would run for 52 episodes, composer Hiroshi Miyagawa wrote a lot of new music for Yamato III, which created a surplus when the series was reduced to 25 episodes. Tracks missing from this disc, such as the rousing march of the Galman Dimensional Submarines, can instead be found on the 1995 Yamato III BGM Collection. Fortunately, tracks missing from that disc are present here, which makes them both an indispensable pair. See the entire Yamato III discography here.

This is the last double-CD package in the Series, and it’s as complete as any Final Yamato music collection needs to be. Of all the different parts of the Yamato saga, Final Yamato got more album coverage than any other film, including a Prelude to Final “image album” that predated the release of the movie and is included here in its entirety as bonus tracks. Also included is the Yamato half of the Yamato/Gundam Piano Suite cover album from 1982. See the entire Final Yamato discography here.

The other side of the Yamato musical coin is the one that features vocal performances. It’s easy to forget how many of them there were until they are all collected on one CD, as they are here. From the original opening theme to the last of the many songs produced for Final Yamato, there are no fewer than 17 Yamato songs, all of which were available as 45 rpm singles at one time or another. Just to end things with a bang, this CD closes with a new jazz version of the main theme that simply oozes with nightclub cool. Even this was only about half the songs that were recorded for the Yamato saga. The other half was released later on a disc titled Yamato the Best II. See it here along with a complete discography for the Legacy Years. 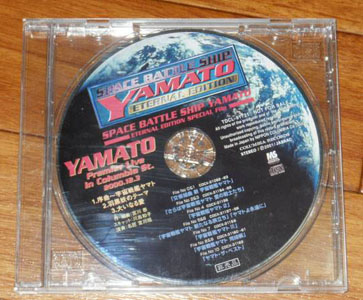 (TDCL-91721)
This disc was limited to just 300 copies and released in 2001. It contains three unique tracks that were recorded in a special session at Columbia music studio on December 3, 2000. Lucky fans who won a postcard lottery could attend and watch as Hiroshi Miyagawa lead the studio orchestra in re-arrangements of music heard on Eternal Edition Disc 0. The CD was probably sent to those fans afterward, and is now quite possibly the rarest Yamato disc of all.

At some unknown time following the release of the series, this limited-edition storage book was available to fans who saved their proof-of-purchase information. Like the “Special File,” it is now a very rare collectible.