As we saw in articles from 1981 Fan Club magazines (presented in the Final Yamato Time Machine Part 1), Exec Producer Yoshinobu Nishizaki and his inner circle of writers had their work cut out for them when they first started grappling with the finale of the Space Battleship Yamato saga. The magazines featured transcripts of their first three “brainstorming” sessions (held in late May and early June) which were akin to a sculptor taking the first tentative chips off a block of stone.

It was unprecedented at the time for such “insider” material to be published, but what wasn’t mentioned was that three more sessions took place afterward. As concepts evolved, it may have been decided that they were approaching spoiler territory, so the latter meetings didn’t get into print.

However, the entire story-building process was documented at length in a gigantic hardcover book published by Westcape Corporation in December 1983. That book is the source for the bulk of our making-of coverage. We begin with this segment, which reproduces the major talking points of all six brainstorming sessions.

The text below summarizes everything, including notes from the latter sessions held between June 11 and July 24.

Along with Producer Yoshinobu Nishizaki (far left), the participants were Eiichi Yamamoto and Aritsune Toyota, both of whom went all the way back to story development on Series 1. Yamamoto had also served as the series director for Yamato III. The fourth member of the team (far right) was new to Yamato: live-action screen writer Kazuo Kasahara, who brought actual naval experience to the table. Read more about him here.

Nishizaki: As Yamato approached its 10-year anniversary, its nostalgia content has lessened. At most, there’s just Kodai and Yuki, and the figure of Yamato. Since it takes 30 minutes to launch Yamato, this time it suddenly takes on the enemy. It just needs to go to war one more time. I want to show a conclusion for Kodai and Yuki in it.

Yamamoto: Although it’s the end for Yamato as it goes into space, is it like an elephant that gets old and goes off to secret ground? It’s hard to picture it.

Kasahara: I think sinking into the ocean would be more Japanese.

Toyota: I think so, too.

Kasahara: Even if Yamato disappears, the spirit is left behind in the crew. Yamato, now broken down, goes to battle. Kodai and Shima overcome the opposition in the ship. For example, Kodai settles everything, and everyone returns to Earth. Although Yamato sinks off the coast of Kyushu, the spirit remains in the hearts of the crew. I’m thinking of a simple story like that. Also, I want to add the romance of a shining mother world somewhere in outer space.

Yamamoto: The heaven and hell of space were shown early on in Yamato, and it was good for the story to discover various things everywhere.

Toyota: Space became too inflated and made for a dark image. I want brightness.

2. What to do with the role of the villain?

Kasahara: We could consider the nihilistic existence of a Ryunosuke Tsukue type.

Nishizaki: The villain’s part should appeal to Japanese sensibilities.

Kasahara: As for the opposition of Kodai and Shima that I mentioned before, the nihilistic evil could transfer to Shima Daisuke and cause the two to fight.

3. What happens to the captain?

Nishizaki: Since a ship is moved by a captain, Kodai is insufficient in the captain’s role. I regret that we failed in Be Forever Yamato to present the captain moving the ship.

Kasahara: Captain Okita satisfied the sense of justice correcting injustice, but if we position Kodai as the captain and carry that out, he’ll become a fuddy-duddy.

Nishizaki: Leiji Matsumoto suggested we put Okita aboard Yamato, but I wondered about that. Although, all of the qualified people have been killed…

Toyota: The portrait of a dead man holds sway within the ship. This is completely the world of Stalin. What about the commander of the Earth Defense Forces?

Yamamoto: Then we’d have to create another commander. In any case, because someone in that position would guide Kodai and the crew, it’s difficult to come up with someone who isn’t an imitation of Captain Okita.

Kasahara: When it comes to the captain of a ship, the image of a man of the sea is important. The Earth Defense Forces commander is an intellectual occupation.

Toyota: We could invite public participation to find the image of the captain this time.

Yamamoto: Because the enemy must be broken when they are set up, it should be someone who knows a lot about strategy.

Nishizaki: This time around, for the Earth-side drama, I wanted to concentrate on Kodai and Shima’s relationship as rivals, the men of Yamato‘s main bridge, Yamato‘s captain, and Yuki Mori’s story.

Kasahara: The new captain could be more barbaric than Okita. For example, I think it could be someone like General Patton. Then Kodai is useful without becoming a fuddy-duddy.

Nishizaki: I want the image of a man of the sea. 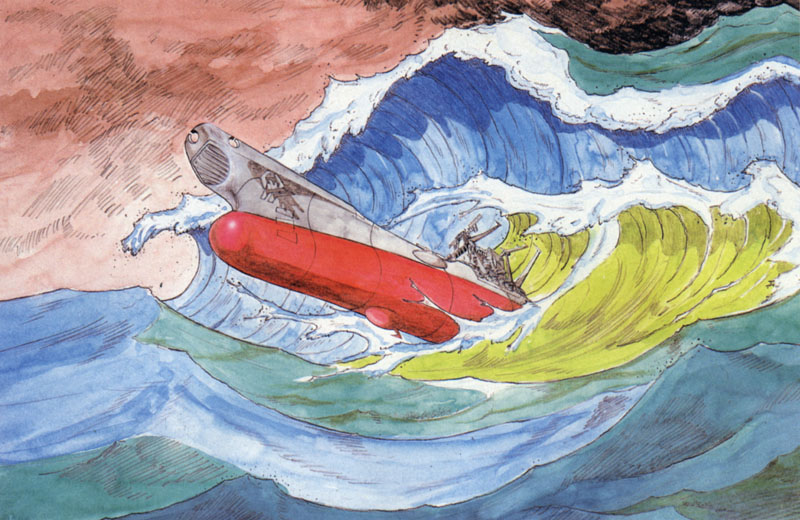 Yamamoto: Graphically, while she’s going through space, having it go on for over 10 minutes is unreasonable.

Nishizaki: Meanwhile, we can insert scenes from the past, but since this will be understood as the finale of the series, I think that point will earn sufficient empathy.

Kasahara: Yamato returns to the sea floor. That may be suitable as Buddhist reincarnation. There should be recollection scenes in there, too.

Nishizaki: If we do that, I want put recollection scenes in the opening.

Toyota: This time, Yamato doesn’t have to take one step away from Earth. It could fight an enemy from the depths of the Earth. A blast from an underground enemy causes the atmosphere to fluctuate, and it would be impossible for Yamato to use Wave-Motion Energy. It couldn’t fly, and of course it couldn’t use the Wave-Motion Gun.

Until now, space has been the sea, but not like an actual sea voyage. They would have to confront the enemy in a sea battle. Considering that there haven’t been many naval battles before now, even if we set it in space there could be a planet with an ocean similar to Earth and Yamato will be bound to the sea.

Nishizaki: I want the basic story to be a linear one with an attack from a large fleet, an invasion of Earth, and Yamato launching.

Kasahara: A sea battle alone is not enough.

Yamamoto: Let’s show the main body of the enemy from the beginning this time. I think it’s better to show the appeal of the enemy king’s evil.

Nishizaki: Dessler will have his last appearance.

Yamamoto: In a supporting role, playing Miki Hirate (to their Zatoichi).

Kasahara: Like the end of Battleship Musashi, he takes on the enemy single-handed to accomplish the last of his business.

Nishizaki: I’d like to ask Mr. Toyota for his ideas about an enemy that would invade from outside the galaxy at the beginning of the 23rd century.

Yamamoto: If we bring it to an end in the space around Cygnus, it would not lead to a last scene of sinking off the coast of Kyushu.

Toyota: It refrained from a decisive battle on the mainland in World War II, so let’s think of it as the Okinawa battle with no way back. The rest becomes a matter of the picture.

Kasahara: We must show that the purpose of the voyage is for Yamato to save the Earth.

6. The fascination of a heroine?

Toyota: I wonder if an out-of-this-world woman will appear once again.

Kasahara: In the middle of a brutal story, a beautiful image is salvation.

7. How to make Yamato attractive?

Kasahara: The preparation phase for a battle is interesting. Also, scenes of shells flying back and forth. The process raises the dramatic tension.

Yamamoto: This is the merit of appointing director Toshio Masuda. I think you need someone with military experience to depict the things you don’t know about.

Kasahara: For example, when Yamato launches, fighter planes follow to see it safely off on its voyage. They split up into two groups and turn and come back. The good feeling of “the light of fireflies” would flow out of it.

Yamamoto: The power and scale of a real warship are not felt in a picture of Yamato. I want the people making those pictures to see the real thing by all means.

Nishizaki: I want to confirm that Yamato is a battleship once again.

Yamamoto: I think battles should be simple. Besides that, I think it’d be nice to show what Yamato does ordinarily.

Kasahara: When a ship is hit by fire, the sound of it resounds, and it’s by that sound that Yamato‘s size is brought out. If you depict this in detail, the angle from which it gets hit is also interesting. When the enemy schemes to strike perpendicular to the ship, how does the captain dodge or defend from that angle? That hasn’t been seen in Yamato before now.

Yamamoto: The battle at the Rainbow Star Cluster was interesting in the early Yamato. The battle process was well-depicted there.

Kasahara: It would be refreshing to show ingenuity in the process of a fight, such as clarifying an enemy target. I think we can do unprecedented scenes. I think it’s good to show human empathy by depicting things like suicide attacks and farewell toasts with water, posthumous promotions for the dead, and the discipline of war and the military.

Yamamoto: It’s nice of you to also explain the warp, too. It becomes important to show it realistically.

Toyota: It’s not possible to make something fresh and interesting unless you get rid of the conventional parts.

Kasahara: Even in a Yakuza movie, the most interesting part is about honor and humanity.

Nishizaki: I want to do a story that will make you cry.