Final Yamato coverage in Japan’s monthly anime magazines took an important turn in November when movie production reached a point where cel animation existed to generate publicity stills. Thus, after many months of nothing but design and development art, fans could finally get a preview of what would actually be projected onto the big screen.

Despite that, page counts in three of the magazines were shorter, probably owing to a prodigious amount of new and forthcoming anime to cover. Yoshinobu Nishizaki did a full round of interviews with each publisher, My Anime dominated the month by giving Final Yamato its first cover story and setting a new record for page count, and The Anime had the honor of publishing the first actual book with Final Yamato material.

Some new products blew in on the first breeze of merchandising, which would soon become a hurricane. Columbia released two new cover albums on November 21: Yamato Digital Trip Synthesizer Fantasy and Anime Piano ~ Yamato/Gundam. The month closed out with a fascinating book written by fans for fans titled Anime Great Love! From Yamato to Gundam. Dig deep into it here. 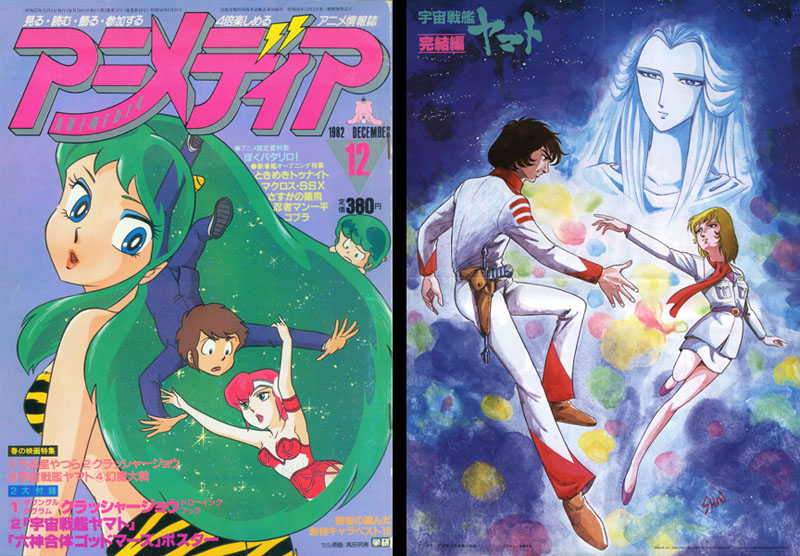 Urusei Yatsura [Obnoxious Aliens] scored two of the four covers this month. Based on a massively popular comedy manga by Rumiko Takahashi, it had made its TV debut a little over a year earlier, and its first feature film Only You was set for a February ’83 release. Animedia gave it 11 pages, followed by 5 pages on Godmars, which debuted on TV the same month as Yatsura and was now counting down to a double-barreled conclusion on TV and the big screen (both in December). Right after that, Crusher Joe, Final Yamato, and Harmagedon were grouped together since they would all arrive in theaters within the same month.

TV coverage included Xabungle, Minky Momo, Dougram, and Baxinger, and the issue wrapped up with a lengthy examination of opening title design with examples from new programs such as Macross, SSX, and Space Adventure Cobra. 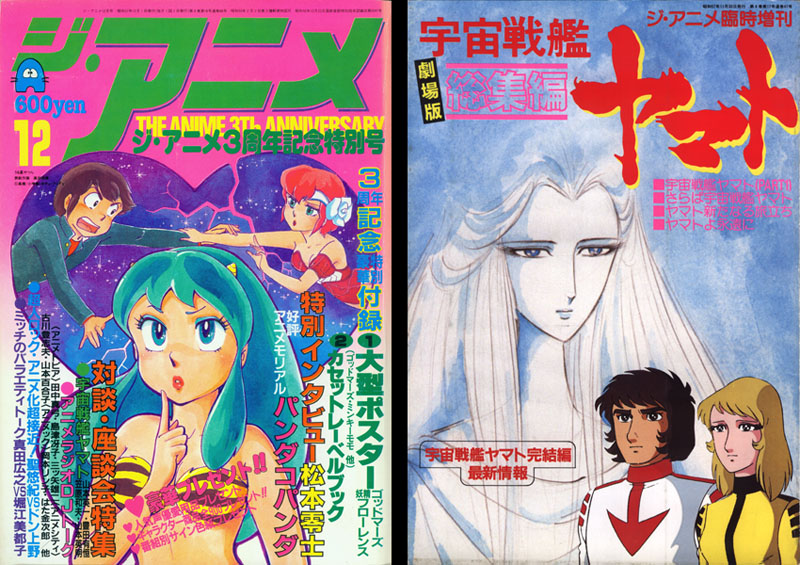 This month marked the 3-year anniversary of The Anime, which was commemorated with special interviews (leading off with Yamato) that spanned the medium. Voice actors from other productions were right up front, participating in autographed prize giveaways. Only You took the cover, but got just two interior pages in a crowded section that flew through all the upcoming feature films with Godmars, Crusher Joe, and Final Yamato getting six pages apiece.

This was the second month for Macross on TV, and a 5-page article zeroed right in on breakout character Lynn Minmay, setting the stage for Minmay-centric coverage that would dominate for years to come. An 8-page bound-in booklet provided a retrospective of Leiji Matsumoto anime, an article covered stop-motion anime made in Japan, and Pando Kopanda got a 16-page memorial overview. Manga legend Yuki Hijiri and singer Mitsuko Horie (both of whom have Yamato connections) were interviewed as part of the anniversary series.

The Final Yamato article, titled The True Spirit of Yamato, dug into the mythos with a Nishizaki interview and a discussion with the four key members of the writing staff.

The Anime‘s publisher had something extra to offer this month, the first book to carry a Final Yamato cover image and pre-release coverage. Nine of its 120 pages rounded up concept and design art with all the rest going to the previous movies, an overview of the Kodai & Yuki love story, a character and mecha encyclopedia, and an extensive glossary that included entries from Yamato III. 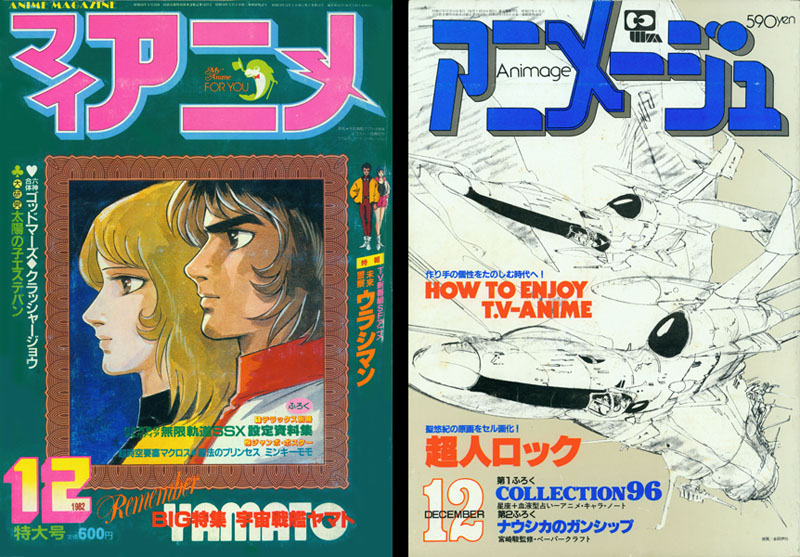 My Anime was always a magazine to buck trends and defy expectations. This month they not only became the first to publish a Final Yamato cover (painted exclusively for the magazine by character designer Shinya Takahashi), they also set a new record for the number of internal pages devoted to Yamato: a 24-page bound-in booklet titled Yamato Decade, packed full of retrospectives and interviews.

See all the pages of Yamato Decade here. Read a complete translation here

Godmars and Crusher Joe got prime coverage this issue, followed by the first article anywhere on Urashiman, a light-hearted SF action TV anime that would premiere in January and run to the end of 1983. Current TV anime got its due with color pages on SSX, Macross, Cobra, Xabungle, Dougram, Baxinger, Minky Momo, Acrobunch, and a preview of an ’83 series called Aura Battler Dunbine. Only You, contrasting with other magazines, got just one page. A unique article looked at the growing world of anime model kits, something the competition had yet to investigate.

Anime on TV in Japan was quickly approaching its 20th anniversary (the first episode of Astro Boy having been broadcast on January 1, 1963), but Animage evidently felt viewers still needed some guidance on how to enjoy it. That was the theme for this issue, which technically also came with a Final Yamato cover (using repurposed concept art by Yoshinori Kanada), though Yamato was not actually mentioned on the front.

In truth, the “How to Enjoy TV Anime” theme was simply an umbrella for this issue’s TV coverage of Xabungle, Baxinger, Dairugger XV, Dr. Slump, and more. Final Yamato was part of a “Big 3” movie article that also included Crusher Joe and Godmars. Yamato‘s segment was 5 pages with another Nishizaki interview, backed up by comments from two staff members and artwork from an upcoming Final Yamato 1983 calendar. 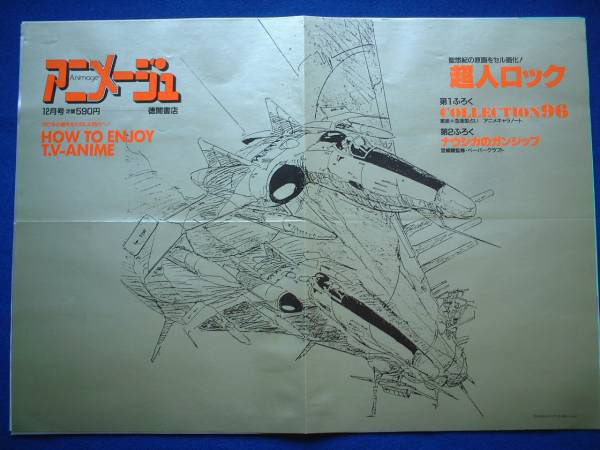 At right is a promotional poster for the issue. For reasons best known to the Animage editor at the time, the Cosmo Tigers were repositioned here.

Continue to December 1982: The last issues of the year herald the thunderous approach of 1983, ripe with new titles. The Final Yamato fire hose opens wide and gallons of promotional artwork come pouring out. The first novelizations, the ’83 calendar, and the return of Yamato Fever!