There’s a certain hazard in becoming a fan of something that has already run its course, like the Space Battleship Yamato saga: when you’re late to the game, you’ve missed out on the first innings. Most of the spinoff books are out of print, most of the toys and model kits are out of production, and the stuff that was rare or limited to begin with is just plain out of reach. 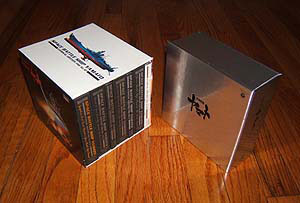 But there’s a pot of gold, or indeed several, waiting for those who stick around and keep watch over the long term. After all, it’s very fashionable once a popular work hits a milestone anniversary to reissue commemorative editions of spinoff products. In 2000, this happened with Nippon Columbia’s extraordinary Eternal Edition” CD series, which collected a huge volume of Yamato soundtrack music (some of which had never before been released) into a newly-packaged collection. (Read a complete review of this set here.) But so much Yamato music was released back during the production years that a single CD set couldn’t contain it all. 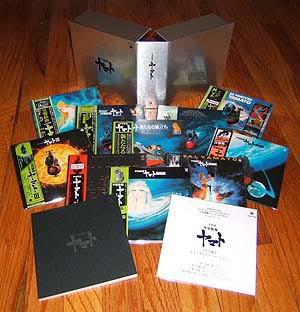 The complete contents of the Premium set

So, for those of you who are hungry for more, Nippon Columbia has done it again. In November 2004, they rolled out a 30th anniversary “Eternal Edition Premium” CD collection. Unlike the earlier series, which came out monthly, this one is only available as a box set, and what a set it is.

Almost all Yamato music that was released from 1973 to 1983 can be grouped into two major categories: BGM’s and Symphonic Suites, terms that were invented and popularized for the very purpose of distinguishing one Yamato LP record from another. BGM stands for BackGround Music and refers to the actual cues heard in the movies and TV shows. Symphonic Suites are just that: rearrangements of the score into a more traditional album format. This process frees up the music from the restrictions of screentime, allowing it to mature, breathe, and expand into new variations.

Just to throw in a couple of curve balls, some of the symphonic albums were called soundtrack albums, but almost everything on them was rearranged in some way for the LP format. Also, symphonic tracks were occasionally employed in the anime, but this was the exception rather than the rule, so don’t get hung up on hair-splitting. The first “Eternal Edition” set collected nearly all the BGM music. This new one pulls all the symphonic albums together into one package, plus a few extras.

In addition to two categories of music, the saga was blessed with two maestros who specialized in each. The first, Hiroshi Miyagawa, was the composer of all the tracks to begin with. His pop music sensibilities were sparse and minimalist, making him an expert at writing “hooks” and getting the most out of a small number of musicians (in accordance with the economies of TV production). The second, virtuoso pianist Kentaro Haneda, came up through the ranks of Miyagawa’s “Symphonic Orchestra Yamato” and became an active collaberator as the music demands increased. Haneda’s classical training brought forth lavish, complex, and multi-layered arrangements. His influence is most strongly heard in the later years. With all that out of the way, let’s examine the albums one by one…

The first disc in the set contains expanded music from the first TV series, released in the wake of the first movie. All the major themes were arranged into a symphonic structure that later proved ideal for live concert performances. Often imitated, never duplicated, this is the best-loved album in the entire Yamato catalogue, and it immediately demonstrated what anime soundtrack music was capable of achieving in the right hands.

The formula of the first symphonic suite was applied to music from the second movie for more magnificent results. To this day, this album is second only to the symphonic suite because it was second to be released.

This was the first album that varied significantly from the actual cues in the film, combining previous cues with new ones and experimenting with their arrangement, just as the film’s story combined previous plot points with new ones to embrace new viewers. This is also the only album in the set that contains vocal tracks.

With two albums covering one film, there was plenty of room to explore variations and experiment with the mixing board. Also included were overture tracks that were not heard in the film. It is here that Kentaro Haneda’s influence begins to make its mark on the arrangements.

Actual BGM music from Yamato III would take 14 more years to be released, so in the meantime this eclectic medley of music cues was the only window into the deep well of creativity Miyagawa plumbed for the third TV series.

This one is somewhat of an oddball, produced as a sort of consolation prize in 1982, when Final Yamato was originally promised, but did not materialize. Haneda’s work is strongly evident in this mixture of early scores and works-in-progress. Interestingly, this entire album was included in the “Eternal Edition” series as well, but this version contains a running narrative that was absent in the previous release.

In keeping with the last big push, the Final Yamato score was generously fortified to fill three albums which provided far more music than was heard in the movie itself. By this time, Haneda had been assigned all the arrangement duties so that Miyagawa could focus on the composing, which strongly distinguishes this from earlier works. 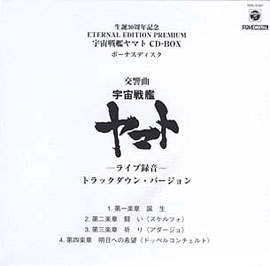 This disc reproduces tracks from the Yamato Grand Symphony concert recorded in 1984 and first released to CD in 1985. Haneda is entirely responsible for this material, which moves Miyagawa’s scores completely into an orchestral arrangement. 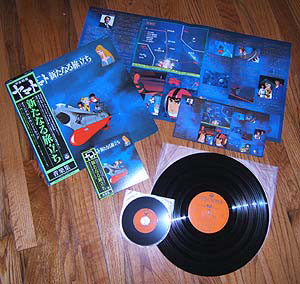 Each CD is an exact, scaled-down reproduction
of the original LPs

Now that we’ve sampled the meat of this collection, it’s worth noting the packaging itself. In a miracle of nostalgic simplicity, Nippon Columbia packaged each individual CD in a mini-replica of the original LP jackets, literally reducing them down to CD size. In a generous touch, the original promotional paperstrips (called “Obis”) are also included, even preserving the ads for other LP’s that were available at the time. Going even farther, the interior liner notes were all shrunk down and here’s the kicker: they’re still legible. Despite this, Columbia has graciously included a pleasantly plump 92-page booklet that reproduces all the liner note text at normal scale. This may not mean much for those of us who don’t read Japanese, but it speaks volumes for Columbia’s attention to detail and respect for the Yamato legacy.

After this, you may well ask what is left over after two big, beefy box sets have been released. The answer is: plenty. A “drama” recording (the audio portion of a film edited onto an LP) was released for every Yamato production. This used to be a terrific way to relive a story, but all were released to CD in 1995 and are unlikely to reappear. That leaves us with cover albums, live albums, radio dramas, and vocal recordings. While many of these have come and gone on CD (except the radio dramas, which have never been released), the latter category is well-covered.

Yamato the Best Part I (Left) and Part II (Center)

Those who snapped up all the discs in the “Eternal Edition” series were treated to an enjoyable song compendium at the end. Volume 11 was called Yamato the Best, and it contained no fewer than 17 tracks, 16 full-length songs from the films and shows, and a new bonus track sung by Isao Sasaki (in full bebop mode) called Space Battleship Yamato 2000 Jazz Version. In December 2004, Nippon Columbia released Yamato the Best Part II, which elbowed its way into the lineup with an amazing 20 additional vocal tracks that were lying in wait for an anniversary dustoff. Although the packaging includes an “Eternal Edition” logo, this new disc isn’t given a volume number. But for our purposes, we can unofficially consider it to be Volume 12.

This grab-bag of oddballs, B-sides, and rarities is a completist’s dream, featuring 4 versions of the two most enduring songs, the opening and closing themes from the first series (Space Battleship Yamato and The Scarlet Scarf). This collection includes the indispensable full-length mixes with vocalist Isao Sasaki (above right) and the Royal Knights Chorus, the extremely rare English versions (with Sasaki doing some impressive vocal calisthenics to belt out the tunes), the irresistable karaoke versions (it’s impossible to listen to these and NOT sing along), and “TV size” versions that match what was actually heard in some of the episodes.

Isao Sasaki easily dominates the rest of the album with six more tracks, all of which are new to CD. Four of them qualify as “image songs,” an interesting term that describes spinoff tracks that were released as singles but not used in any film. In today’s parlance, they would be “inspired by” whatever production they relate to. The lengthiest of these, Yamato 10 Year Tribute, was Sasaki’s last Yamato single, released as an EP with Final Yamato in March ’83. His two remaining tracks are cover-versions of songs originally performed by other vocalists; From Yamato with Love from Farewell to Yamato, and Love Until That Day from Be Forever.

Female vocalists provide another three tracks from the Be Forever era, demo versions of Life of Love and Galactic Legend and an image song called Face in the Stars. All are performed by Mitsuko Horie, who performed one of the two closing themes from the Yamato III TV series. Last but not least are three more karaoke-style tracks that will test your ability to sing in Japanese for years to come; Yamato!! The New Voyage, Pendant of Stars (from Be Forever), and the magnificent Yamato ’83 from Final Yamato.

To sum it up, Yamato the Best II couldn’t be more aptly named. No Yamato music collection can be complete without it!