As with February, the month kicked off with new music. The Kodai and Yamato single by Isao Sasaki arrived February 1, and it was joined on March 1 by the movie’s ending songs: Love Supreme and Yamato ’83. Despite announcements to the contrary, the latter was never actually heard in the end credits for reasons still unknown.

As the wait for Final Yamato‘s premiere dwindled down to the last two weeks, a much-hyped “Anime Battle” turned eyeballs toward movie theaters. Whether by chance or design, Yamato‘s last voyage would be preceded by two other high-profile films one week earlier: Harmagedon and Crusher Joe would both premiere on March 12 and kick off the first “SF anime takeover” of the box office. For those who wished to cast it as a competition, it was a strong one.

Harmagedon was the adaptation of a well-known manga and novel series titled Genma Taisen [Wars]. The director was Rintaro, fresh from the Galaxy Express movies, and the designer was Katsuhiro Otomo, who would go on to create Akira. Crusher Joe had an equally impressive pedigree, created by Studio Nue writer Haruka Takachiho and directed by Yamato / Gundam veteran Yasuhiko Yoshikazu. Whereas Harmagedon was set on Earth, Crusher Joe was a rollicking space action thriller that, of the three, best typified the direction anime would take over the next few years. 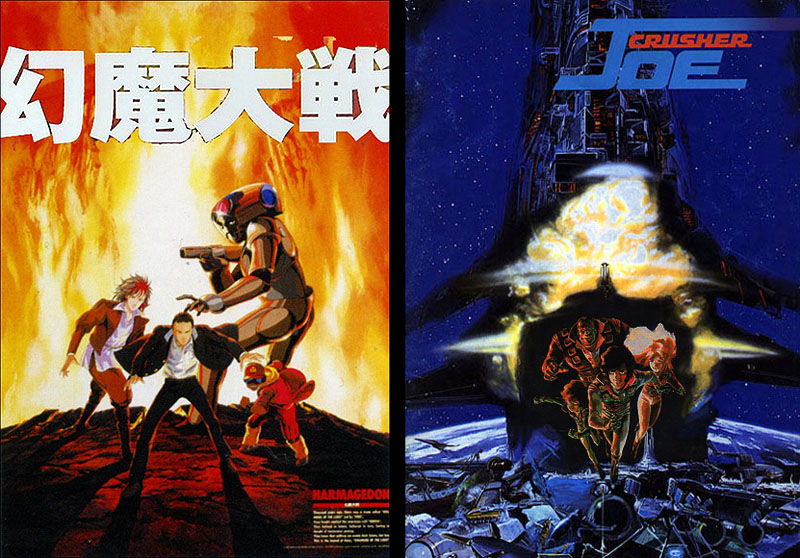 All three movies are remembered for debuting close together, but they weren’t the only anime you could find in theaters that month. Toei unveiled one of its perennial anime film festivals on March 13 consisting of five featurettes, including Dr. Slump and Doraemon. Those who had a financial stake in all of this might have spent the month sweating bullets, but it was a terrific time to be a fan.

As great as it was to be a fan, there was still an even better position to be in: the publisher of an anime magazine. In March 1983, the last thing you had to worry about was job security. All the issues for this month (which carried April cover dates) would hit newsstands just over a week before Final Yamato‘s premiere on March 19, which put them in a real sweet spot. Fan anticipation would never be higher, and spoilers would never be thicker. 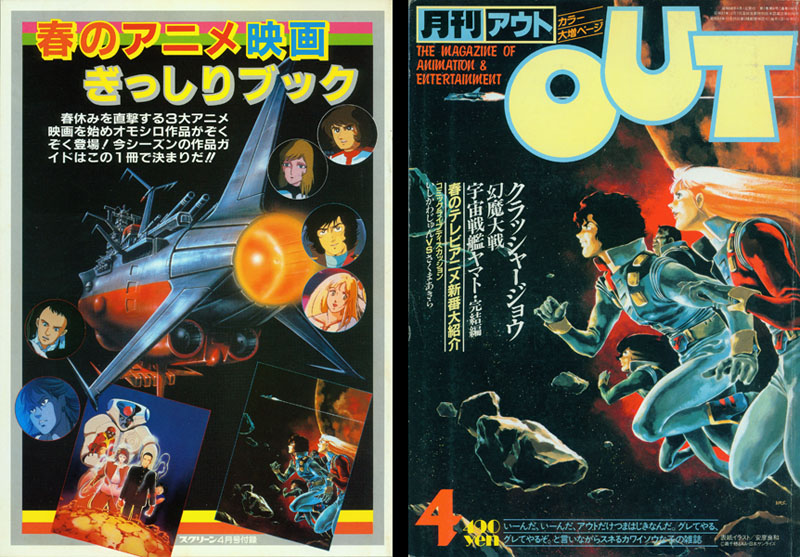 Anime Movies for the Spring

In addition to The Anime, Kindai Movie Company also published a mainstream entertainment magazine called Screen. Under this imprint, they had already published large-format specials for Be Forever and both Galaxy Express movies, and would do another one for Final Yamato in April. Meanwhile, this pamphlet was tucked into the current issue of Screen, a full-color 28-page promo for all the March premieres. It gave basic information on the three big SF movies and followed up with the others mentioned above.

Despite its role as Yamato‘s number 1 cheerleader in 1977, OUT had neglected the old favorite since its Be Forever coverage in 1980. (The editorial staff had changed since then, so this wasn’t a huge surprise.) Crusher Joe got a hefty cover story and Harmagedon followed with six pages, but the 4-page Final Yamato article echoed the creative spirit of the past by including a customized map of the movie’s events made in-house, based on the information that was known at the time. 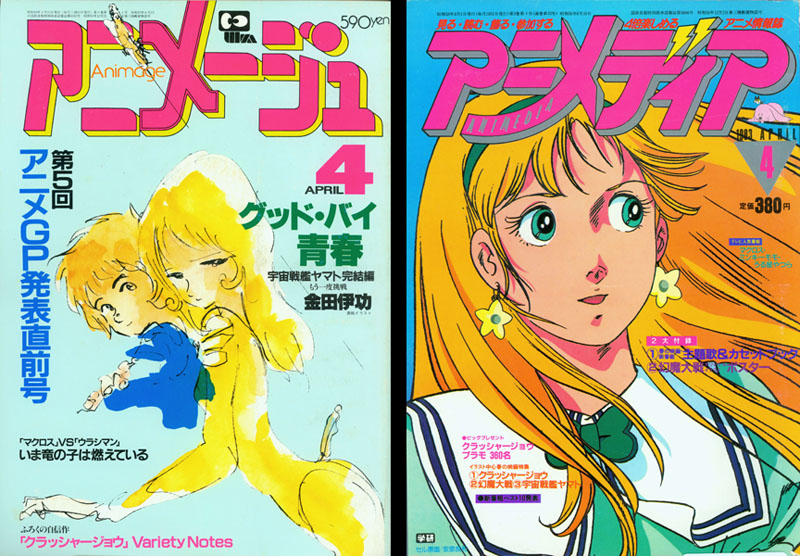 This was the only magazine to sport a Final Yamato cover this month, using artwork by Yoshinori Kanada. Animage was now big enough to have its own subgroups, a music label that published Final Yamato records and a high-profile line of novels (named AM Juju) with a 2-part Final Yamato adaptation illustrated by Kanada. The cover image (accompanied by the headline “Goodbye Youth”) was derived from those illustrations, and posters were made with the same art (see below).

In truth, Animage was becoming a bit notorious for giving preferential treatment to properties that it had licensing agreements with, but when one of those licenses is Yamato and another is Hayao Miyazaki’s Nausicaa, you definitely know where your bread is buttered. Tokuma Shoten was a leader in anime publishing as well, so there was plenty of cross-promotion for Roman Albums and such.

With so much happening on TV, most of the interior was devoted to that side of things, and the movie articles (one per film) seemed almost like a side note. One interesting piece was a photo feature on fan maniacs (they weren’t yet called “otaku”) who had amassed huge collections, a sign of things to come.

The 4-page Final Yamato article broke with all the others by forgoing story information and instead presenting a roundup of short interviews with past Yamato veterans. Read it here.

Alfin from Crusher Joe stole glances and hearts on the cover of this issue. The movie got a 9-page lead story, followed by six for Harmagedon and four for Final Yamato. TV coverage took up the bulk of the issue, one highlight being a bound-in booklet on Dougram, which was now in the final month of its epic 75-episode run. A 36-page bonus booklet with lyrics to current anime songs featured three from Final Yamato.

The 4-page Final Yamato article was a review of the major story points with a focus on character drama. Read it here. 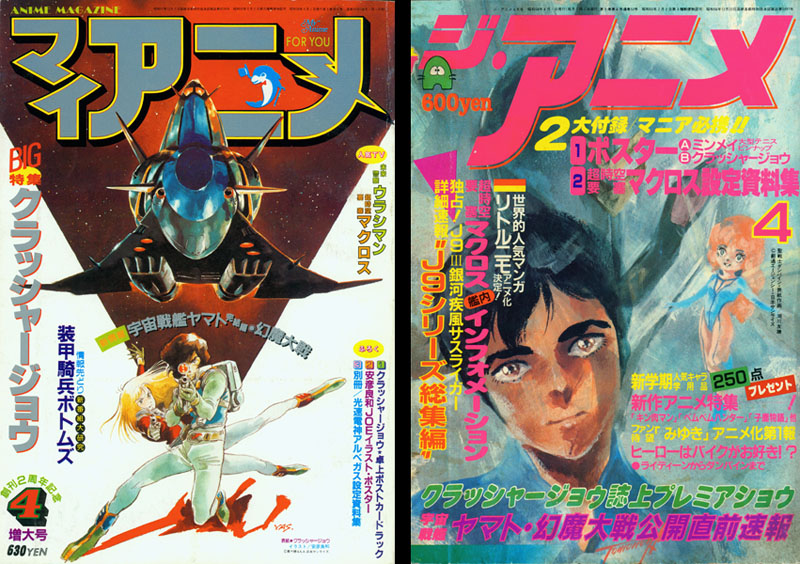 This was the third magazine with a Crusher Joe cover story, but in this case the “story” was a 24-page bound-in booklet with extensive stills, art, and interviews on the film. The magazine itself kicked off with a big Final Yamato feature, four pages on Harmagedon, and splashy TV articles on Macross, Urashiman, and Dunbine. Votoms got its most in-depth coverage to date with an 8-page bound-in booklet. Also included was a feature on anime model-building, yet another piece on Mad Machine (a supercar anime destined never to air), and a conversation between Gary Kurtz and Shotaro Ishinomori about fantasy storytelling and The Dark Crystal, which was on the horizon at the time.

This issue marked My Anime‘s 2nd anniversary. Yamato had a presence in the magazine right from the start, with the Yamato III anime comics commencing in its first issue (March 1981). Since this Final Yamato article would bring that presence to a close, they packed all the spoilers they could muster into a lavish ten pages.

The Anime gave its cover to Dunbine (surrounded by a sea of headlines that is de rigueur for anime magazines nowadays) and opened with a bound-in “Animemorial” booklet on the J9 series Sasuraiger. The three SF movies got top billing, followed by loads of TV coverage (with Macross in the lead, as usual). An international co-production of Little Nemo in Slumberland was announced, and another bound-in booklet examined “super motorcycles” in anime (Mospeada was still a few months in the future, but there were plenty of them already around).

A large-format The Anime special on Final Yamato would be published in April, but this was the last time a Yamato article would appear in the magazine. They said farewell with an exclusive poster by character designer Shinya Takahashi (seen below), six color pages on the film with heavy-duty spoilers, and a 5-page interview with longtime Yamato veteran Eiichi Yamamoto.

Read it all here. 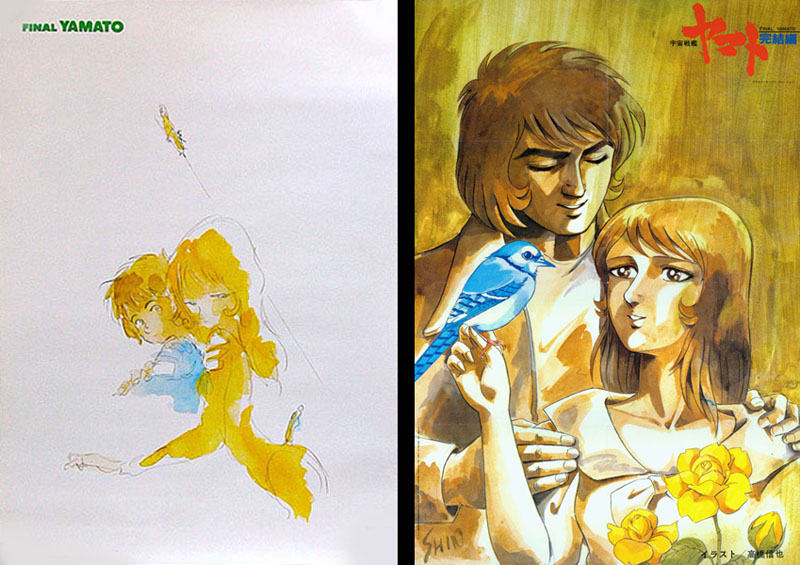 Left: by Yoshinori Kanada, for Animage. Right: by Shinya Takahashi, for The Anime.

And so ends the first half of March 1983…sort of. When these magazines were published, nine days still remained before Final Yamato‘s premiere; just enough time for other parties to jump on the pre-release bandwagon. Find out who they were in Part 2 and see what it was like when the long wait finally came to an end. 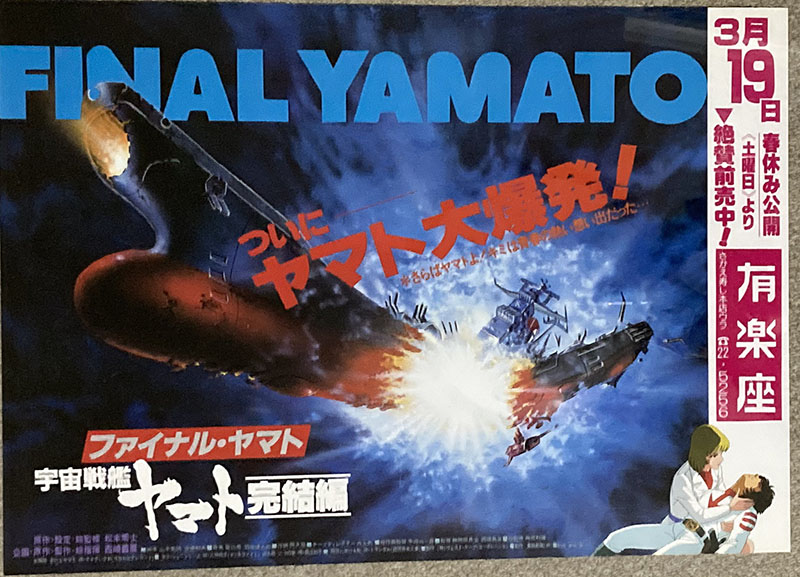