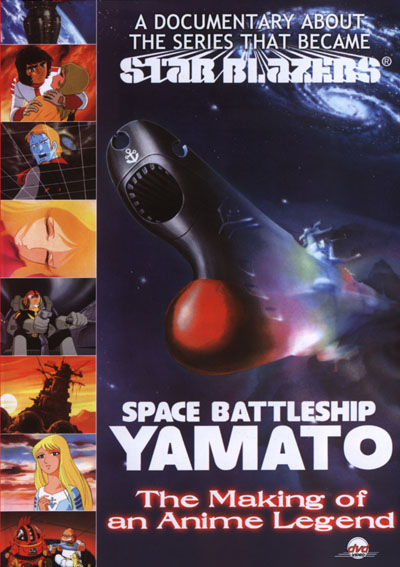 Although the idea for a Yamato documentary came to me just about a year ago, it has been many years in the making. Now that the work’s behind me, I thought I’d take this moment to share with you what made it happen. I’ve written in the past about the impact Star Blazers had on me, helping me to find my careers in both comics and animation, and I look at this project as another way of giving back some of what inspired me.

Those of you with good memories might recognize my name from the Star Blazers comic books that Voyager Entertainment published about 10 years ago. Back then I teamed up with my friends John Ott and Bruce Lewis, and we all approached Voyager about becoming a comic book publisher so that (A) they could increase the visibility of Star Blazers and Yamato, and (B) we could get jobs drawing comics about one of our favorite anime series. We had a great time doing this for three years, but a turbulent comic book world made it difficult to continue after 1997, so we waved a fond farewell and busied ourselves with other things.

I was prepared to consider my Voyager relationship part of the past until November of 2000, when they called me out of the blue looking for assistance with the transformation of their video line onto DVD. I had to think about it for all of half a second before I said yes. Star Blazers, after all, helped to put me where I am today, and I can’t imagine anything that would dissuade me from continuing to support it in any way possible. 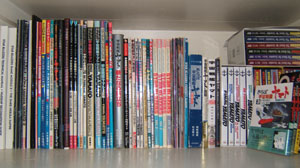 Part of the indispensible reference libarary
The first order of business was to decide what could be done with the DVD format, which I had only begun to explore when I got my first player only a few months earlier. All the best DVDs came with tons of extra features, and we all agreed that Star Blazers deserved as much attention as we could give it. That’s tricky when you consider that most of the production material is long gone, having been discarded after the series was assembled in 1980. Fortunately, Space Battleship Yamato received an incredible amount of coverage and documentation when it was made in Japan, so the obvious answer was to turn to my personal collection of Yamato books and memorabilia, which I had been accumulating for about as long as Star Blazers existed. Amazingly, even more collectibles seemed to pop up just when I needed them for one purpose or another. Never underestimate the value of persistent scrounging.

The next thing I needed was to hire some of my Japanese-speaking friends to translate material for me. This was a dream come true, since I had always lacked both the funds and the impetus to get serious, heavy-duty translating done on my own. There was a fair amount of this in the Star Blazers comic books, but now the need was greater and the purpose higher. After all, a lot more people would be seeing it. So instead of piecing together sketchy details like an archaeologist, it would be finally possible for me to dig wholesale into the world of Yamato and learn all the nitty-gritty details that had been hiding behind the language barrier. 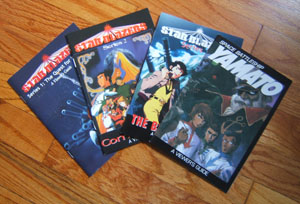 Booklets from the Voyager DVD box sets
If you happen to have all the Star Blazers DVDs in your own collection, it’s easy to see the effects of the learning curve we went through as we created them. Series 1 was my very first DVD project, and for me the real excitement was discovering what could be done with the format. The extra features on Series 2 were a step forward from Series 1, the production of Series 3 was another step forward, and the work we did on the Yamato movies benefited tremendously from that experience. Concurrently, Voyager asked me to create material for this very website, and you already know what a fruitful relationship that has become. I can honestly say I’ve never enjoyed a project more.

Alongside this activity, I made it a point to periodically get out among my fellow anime buffs and soak up the atmosphere. Every autumn, this lead me to my favorite anime convention, Anime Weekend Atlanta (more info at their website here). My friends there are kind enough to invite me to attend as a guest each year, and even kinder to provide me with a forum to share the work I do with anyone curious (or brave) enough to have a look. AWA is also where some of the voice actor interviews were conducted for both Series 2 and Series 3. 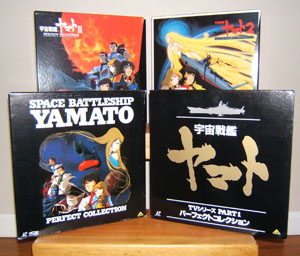 Laser Discs: still the best after all these years
Flash forward to early 2004. The DVD for Final Yamato was finished, and the very last project on our list was the box set for the 5 Yamato movies. By this time, the amount of material that had been collected and translated was staggering, and not all of it had found a home on a DVD or this website. That’s when I realized I had reached a point where I could write a comprehensive history of the entire Yamato phenomenon from its very beginning right up to today. The booklet that would be included in the box set was a perfect place for that history, so I began to assemble it. These sorts of projects often evolve in ways you can’t predict, and the booklet soon evolved into a 30-year history of events and spinoff products. This is great information to have at your fingertips, but it still used up only a fraction of what was available, so I started thinking about other ways to put the whole thing together into one big package.

My forums at AWA came to mind; it seemed like a good place for a slideshow-style presentation with a running narrative. But the notion of standing at a microphone and talking about pictures on a screen quickly gave way to the much less intimidating notion of creating a self-running program. Then the light bulb popped on: a new DVD. Not just for the audience at one convention, but for the very people who had kept the torch burning all this time: YOU. I put forward this proposal to Barry Winston, the President of Voyager Entertainment, who probably took about as long to consider it as I did back in November of 2000. The lights were green and the doors were open. 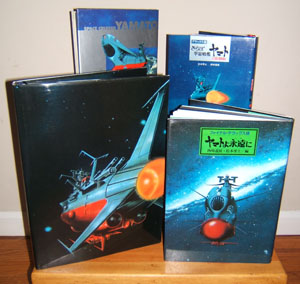 The ultra-rare commemorative hardcovers
From here I could bore you with stories about writing the script, collecting and digitizing all the images, finding voice talent, figuring out which scenes and music to use, or any of the assembly phases, but that’s all just detail. To me, the best part of any “making of” tale starts long before the actual workload. I love hearing about the twists of fate and the invisible forces that shape an idea into its finished form. Sometimes I wonder what my life might be like if I had never seen Star Blazers or Yamato, but then I remember that there’s no way I could have missed them. In a very direct way, Yoshinobu Nishizaki, Leiji Matsumoto, Toshio Masuda, and all the other artists who made the saga guaranteed that I would be placed on this path. And the best part of that fact is that I am in no way unique or unusual in that regard; hundreds, thousands, maybe even millions of us have been given the same gift. We might all use that gift differently, but it’s there for everyone to partake.

In the end, I really like the idea that “The Making of an Anime Legend” will help to perpetuate that gift. I’ve had the privilege of an extensive look into the life of the Yamato/Star Blazers saga, and knowing what it took to put the whole thing together only increases your appreciation for it.